A woman who glassed a surfing legend’s son has been sentenced to six months behind bars.

Emily Mortlock, 29, threw a schooner glass at Terry Richardson’s son during an all-in brawl at the Cabbage Tree Hotel in Wollongong in June last year.

Mr Richardson – who reached world number seven in the 1980s – was celebrating his son Troy’s buck’s party along with his two other sons Terry Jnr and Matthew.

An argument over use of a pool table then broke out between Mortlock, her boyfriend and two other people, the Illawarra Mercury reported.

A man from the Buck’s party called Mortlock and her female friend ‘sluts’ and ‘whores,’ which caused a verbal argument between the two groups.

Terry Snr and Terry Jnr were then caught on security camera getting up from their seats before walking towards the scuffle.

Emily Mortlock, 29, threw a schooner glass at Terry Richardson’s son during an all-in brawl at the Cabbage Tree Hotel in Wollongong in June last year. She was sentenced to a non-parole period of six months

Terry Jnr is then seen shoving Mortlock’s then-boyfriend, Daniel Quirk, in his chest.

Motrtlock saw the shove and instantly reacted by throwing a beer glass at Terry Jnr from less than two metres away.

The glass shattered as it hit the left side of his face, causing a free-for-all brawl between the groups, which was swiftly broken up by staff.

Terry Jnr was talen to Sydney Eye Hospital where doctors had to remove glass fragments that were embedded in his face.

The glassing caused a severed tear duct, a lacerated eyeball which needed five stitches, bruising to his eyeball, a 2cm cut above his left eye, and a 1cm cut on his eyelid.

‘On a day that should have been a happy day, it ended with me being rushed to hospital wondering if I was going to lose my eye,’ he wrote.

‘The surgeon said if the glass had struck millimetres to the left I would have lost sight in my eye. I still don’t have full use of it.

He said the injury affected his ability to perform everyday tasks, and he now has memory loss as a result.

‘This was a senseless act that should never have happened and now I have to live with the ramifications for the rest of my life.’

Mr Schmidt said although her actions were reckless, it wasn’t premeditated and there was no planning.

Mortlock wanted to study public health at Wollongong university, and her current job in administration at Wollongong Hospital was pending her sentence. 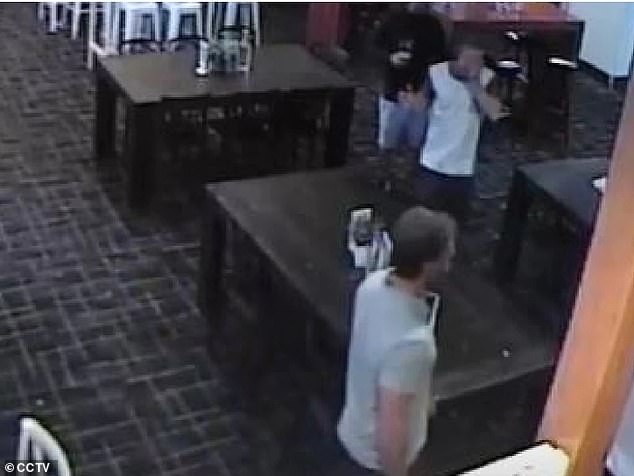 Motrtlock saw Terry Richardson Junior shove her then-boyfriend and instantly reacted by throwing a beer glass at him from less than two metres away, at the Cabbage Tree Hotel in Wollongong

Mr Schmidt sought an intensive corrections order instead of Mortlock being sentenced to full time jail.

Magistrate Clisdell acknowledged Mortlock’s actions were out of character and she was remorseful, but insisted on putting her behind bars.

‘The position here is Ms Mortlock has committed a very serious offence. The injury to the victim is substantial. Nothing in (Terry Jnr’s) behaviour that night in pushing Quirk could excuse what followed,’ he said.

Mortlock was sentenced to 14 months jail, with a 6-month non-parole period, but lodged a severity appeal and applied for bail until the appeal hearing.

The bail application was rejected.