A woman has admitted she’s struggling to accept her sister’s decision to go ahead with her wedding after discovering her fiancé was having an affair for eight months.

Writing on UK-based forum Mumsnet, the woman explained that she and her family have spent the last month comforting her sister about her cheating fiancé, and now have to act like nothing has happened because the couple are going ahead with their wedding.

The woman said the situation has made her look at her sister differently and she can’t imagine being a bridesmaid.

She sparked a heated debate with some urging her to be supportive, while others argued she should discourage her sister from getting married and refuse to attend the ceremony. 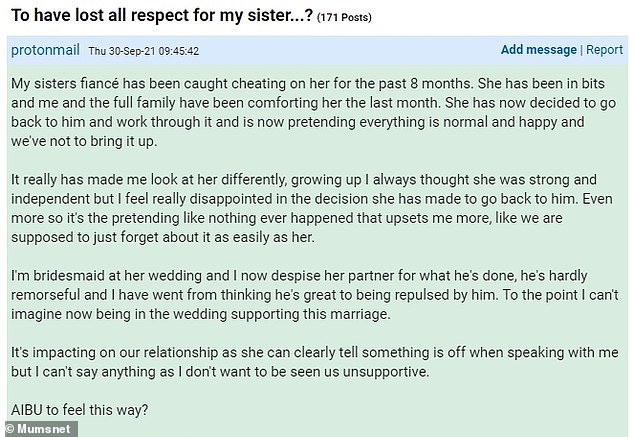 Posting on Mumsnet, the woman admitted she can’t imagine going to her sister’s wedding because she’s marrying a man who was unfaithful for eight months

The woman admitted she was torn about how to maintain a relationship with her sister, while not approving of her fiancé, saying: ‘My sisters fiancé has been caught cheating on her for the past 8 months.

‘She has been in bits and me and the full family have been comforting her the last month. She has now decided to go back to him and work through it and is now pretending everything is normal and happy and we’ve not to bring it up.

‘It really has made me look at her differently, growing up I always thought she was strong and independent but I feel really disappointed in the decision she has made to go back to him. Even more so it’s the pretending like nothing ever happened that upsets me more, like we are supposed to just forget about it as easily as her.

‘I’m bridesmaid at her wedding and I now despise her partner for what he’s done, he’s hardly remorseful and I have went from thinking he’s great to being repulsed by him. To the point I can’t imagine now being in the wedding supporting this marriage.

‘It’s impacting on our relationship as she can clearly tell something is off when speaking with me but I can’t say anything as I don’t want to be seen us unsupportive. AIBU to feel this way?’

A flood of responses reassured the woman that she isn’t being unreasonable by feeling uncomfortable with pretending that her sister’s fiancé hasn’t been unfaithful.

One person wrote: ‘I would be very clear with her. I love you and I will be here for you. You can call me, you can come over to my house. But I won’t support the relationship by socialising with him or being at the wedding.’

Another said: ‘I wouldn’t be standing up with them at their wedding. It is her life and it her choice, but we don’t always have to support the choices of our family.

‘Standing up with someone at their wedding says your support the marriage and you want to celebrate it with them. I couldn’t celebrate this situation.’

However, others blasted the woman for not being supportive of her sister and accused her of attempting to make the situation about herself.

One person wrote: ‘You have no idea what she’s going through. She’s not bringing any children into an abusive relationship, she’s only harming herself and deserves compassion and support, not judgement. Judging her will only isolate her more and feel she has nobody to rely on when she needs support or decides eventually to leave the relationship.’

‘Wow this is all about you and your feelings! What about being there for your sister as behind the smiles she still needs her family.

Others advised the woman to show support for her sister, so that she will have someone to turn to if the relationship doesn’t work out

‘Not saying anything but being off with her? Not going to her wedding? That says it all without words. Stop judging your sister and start looking at your own behaviour,’ another said.

A third added: ‘Your sister hasn’t forgotten about it. She never will. But it’s her decision and she’ll need you if/when it all goes to pot again. There are many, many women on here who end up staying in s*** relationships because they’re trapped and have no family left to turn to.

‘Don’t let her become one of those women. You don’t have to like her decision but she needs her sister.’