A female protester has died and 106 others injured after a driver accidentally accelerated into her during a fuel tax protest in France today.

The protester was killed when a driver caught in traffic accelerated in a panic at Pont-de-Beauvoisin, near Chambery, according to Louis Laugier, the prefect, or top state official, in the eastern Savoie region.

The motorist reportedly accidentally hit and killed the protester taking part in a campaign of road blockades across France today as thousands gathered on motorways in a backlash against President Emmanuel Macron’s planned fuel taxes increases.

The demonstrators, part of a grassroots movement dubbed the ‘yellow vests’, caused traffic jams on highways and blocked roundabouts as they railed against the fuel tax hikes.

A man holds a flare at a tollgate on a highway in Dozule, northwestern France, as demonstrators block the traffic during a protest against the rising of the fuel and oil prices 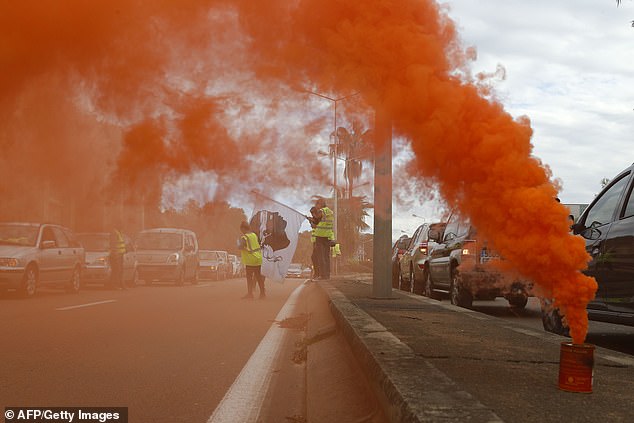 Protesters take part in a road blockade action by letting off flares in Ajaccio on the French Mediterranean Island of Corsica, during a nationwide day of protest 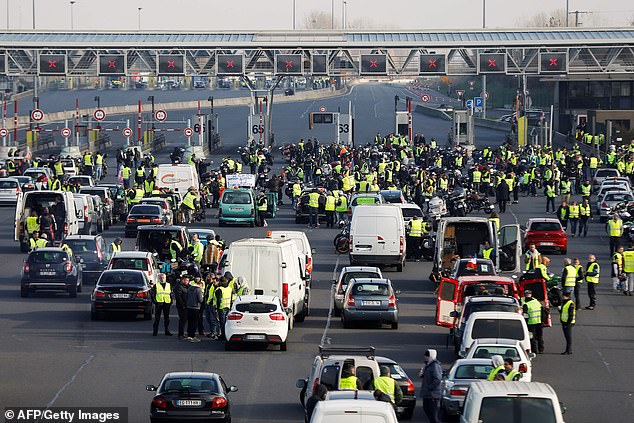 Demonstrators wearing yellow vests (gilets jaunes) block the traffic n Dozule, northwestern France, during a protest against the rising of the fuel and oil prices today 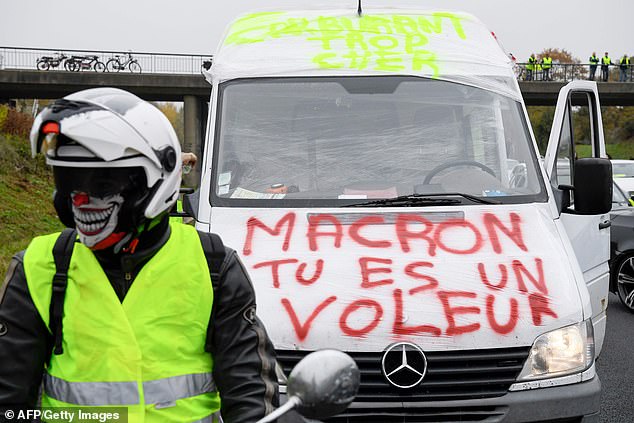 A demonstrator on the ring road of Rennes, western France, wearing yellow vest stands close to a van on which is written ‘Macron, you’re a thief’ during a protest against the rising of the fuel and oil prices today

Sixteen people were also injured in other accidents across the country, and one person run over by a car in northern France was left in a critical state, according to the interior ministry.

Some 50,000 demonstrators, named ‘gilets jaunes’ after their high-visibility jackets, gathered in 1,500 locations, across the country to accuse Macron of abandoning the little people’.

At a blockade on a road in the southeastern department of Savoie, a driver panicked when protesters surrounded her car and she accelerated, hitting and killing the woman demonstrator, French Interior Minister Christophe Castaner said on French TV.

Some incidents occurred as drivers not taking part tried to get around the blockades, police sources said. 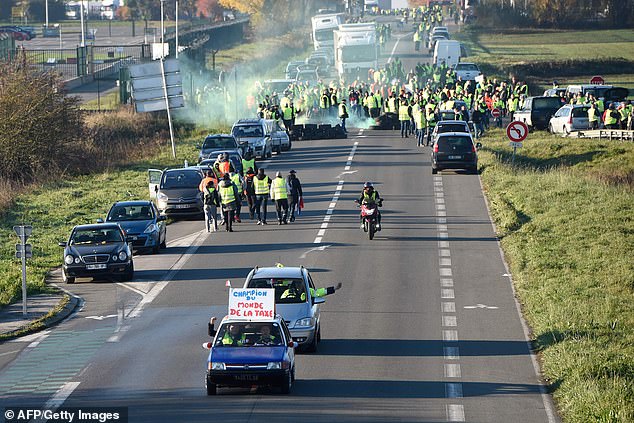 Traffic was blocked during the protest against the rising of the fuel and oil prices on the A2 road in Haulchien near Valenciennes, northern France 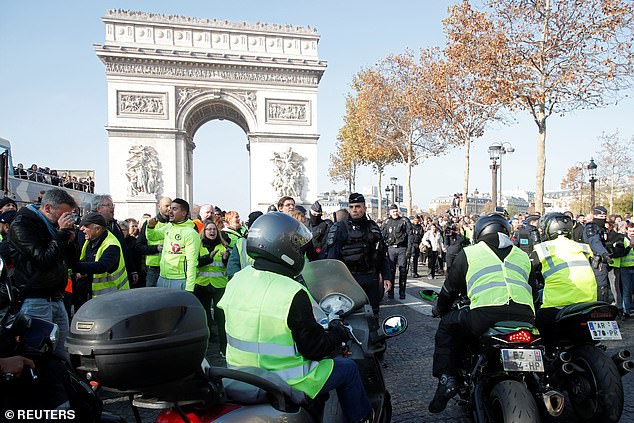 Protesters wearing yellow vests, a symbol of a French drivers’ protest against higher fuel prices, gather near the Arc de Triomphe in Paris 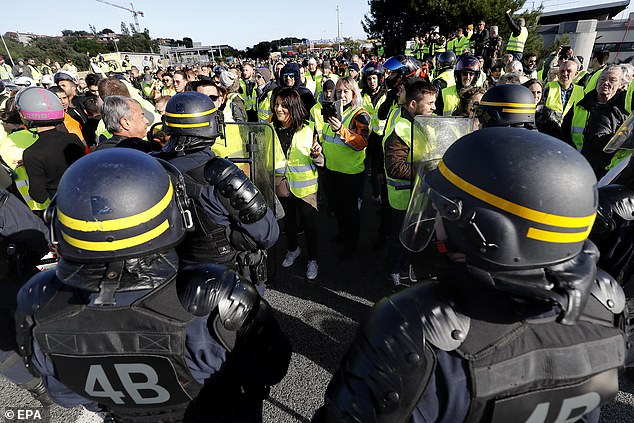 Protesters gather as they try to block roads and cause traffic chaos as part of a nationwide protest, in Antibes, southern France 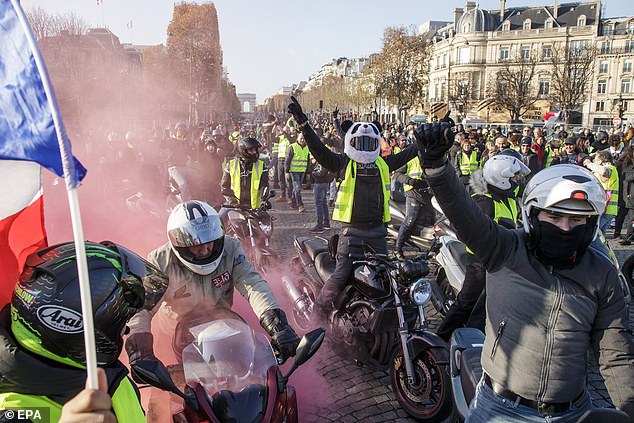 The woman was said to have been attending a protest in the Savoie region of the Auvergne-Rhone-Alpes area in the south east of the country when the accident happened, according to French newspaper Le Parisien.

The protests, largely orchestrated on social media and which aimed to prevent road access to some fuel depots and airports, have also drawn support from some voters dissatisfied with Macron’s economic reforms and his governing style.

Some protesters scrawled messages such as ‘Macron tu es en voleur’, or ‘Macron you are a thief’ on vehicles and banners.

Protesters gathered at sensitive flashpoints including the entry to a tunnel under the Mont-Blanc mountain in the Alps, and traffic was backed up on several highways.

Demonstrators were also on the march in cities, including Marseille where around 100 people, wearing the high visibility vests drivers keep in their cars, blocked roads around its port. 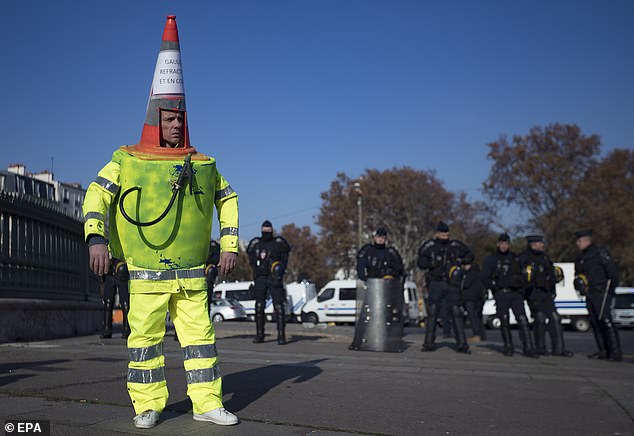 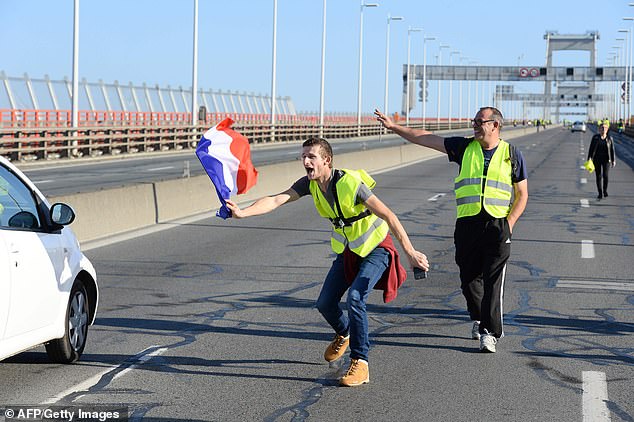 A protester waved French flag as he walked on the rocade ring road in Bordeaux, southwestern France 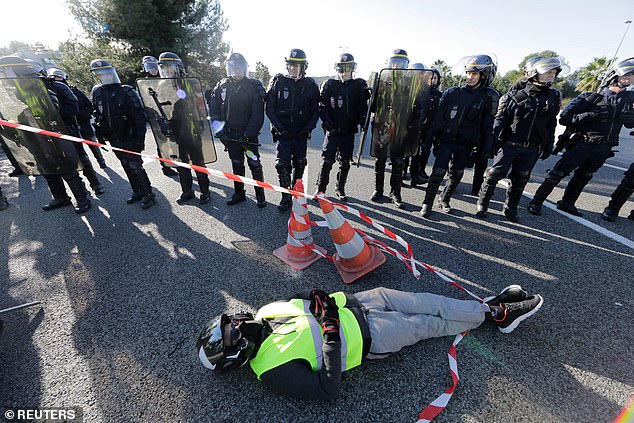 French CRS police secure a position as a man wearing a yellow vest, a symbol of a French drivers’ protest against higher fuel prices, lays on the road in Antibes, France 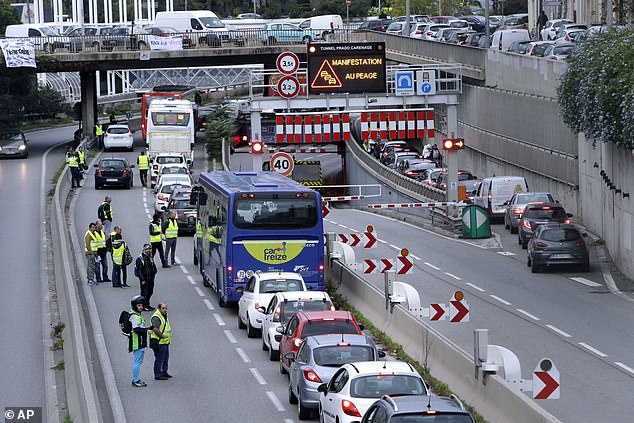 Demonstrators block a motorway exit to protest fuel taxes in Marseille, southern France. Some 50,000 demonstrators gathered in 1,500 locations across the country 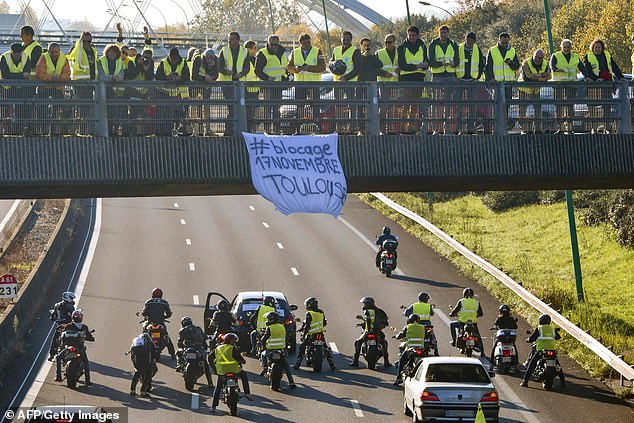 Thousands of drivers blocked roads across France and stood on bridges, as they did here in Toulouse, southern France 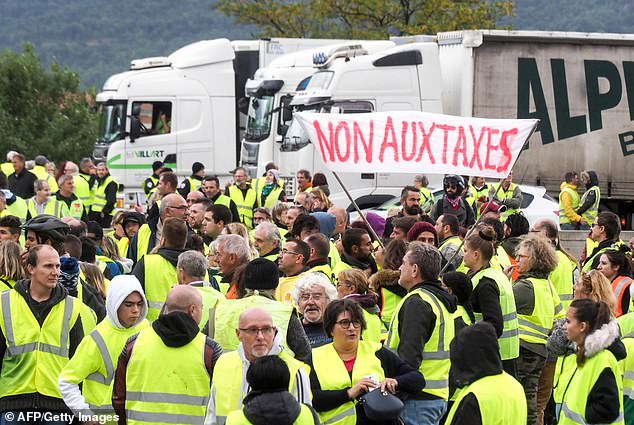 The backlash is the latest confrontation between Macron and voters, mostly based in the countryside and provincial towns and cities, who view the former investment banker as the representative of a remote urban elite.

During his 18 months in power, Macron, 40, has often pushed through reforms, including an overhaul of indebted state rail operator SNCF, in the face of opposition from labour unions.

But the ‘yellow vest’ movement has snowballed swiftly over the past month, catching Macron and even opposition parties off guard. It has already prompted a rare concession from the government, which announced last Wednesday fresh funds to help motorists on the lowest incomes.

The higher fuel taxes were approved in late 2017 but started to bite as oil prices surged in October, even though they have since eased off somewhat.

The diesel tax increases are designed to encourage drivers to switch to more environmentally-friendly cars.