A woman who used to eat herself sick has lost 135 pounds after a doctor broke the news that she was on the verge of becoming diabetic.

Cate Monigan, a family services specialist from New York, was always overweight while growing up, despite trying diets from the tender age of age. By the time she was an adult, she had ballooned to 297 lbs.

After getting some scary news from a doctor, though, the 25-year-old turned her life around, going from a size 24 to a size six. 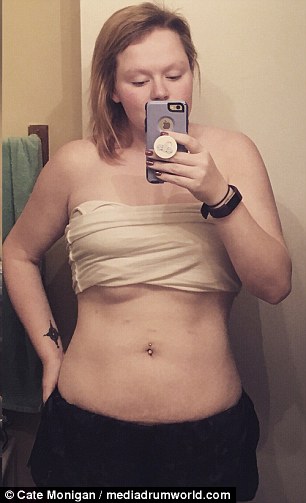 Unbelievable: Cate Monigan used to overeat and was told she was on the verge of becoming diabetic, which made her change her lifestyle and lose a shocking 135 pounds 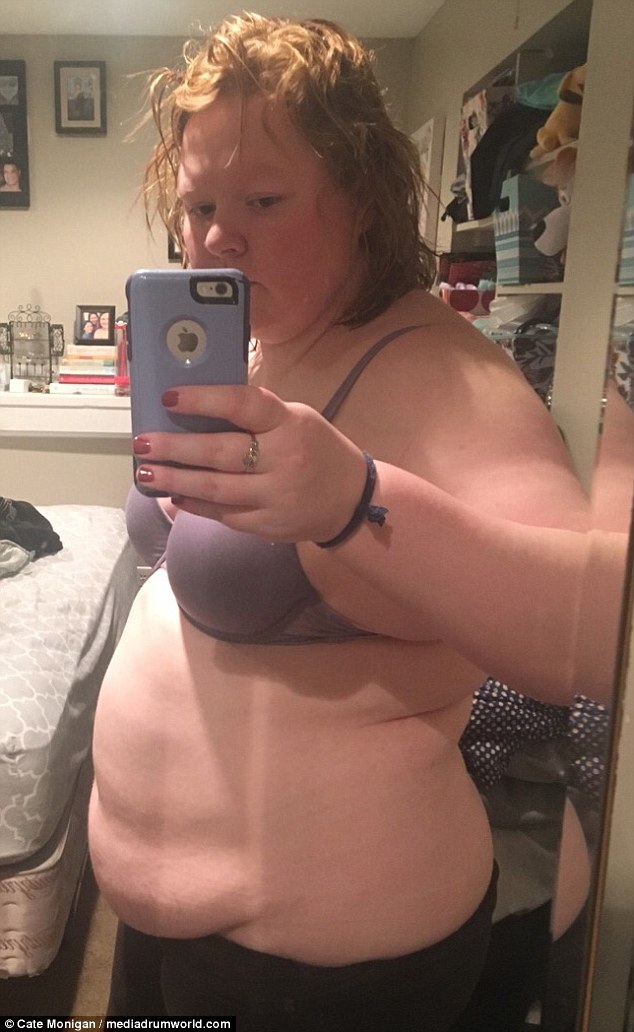 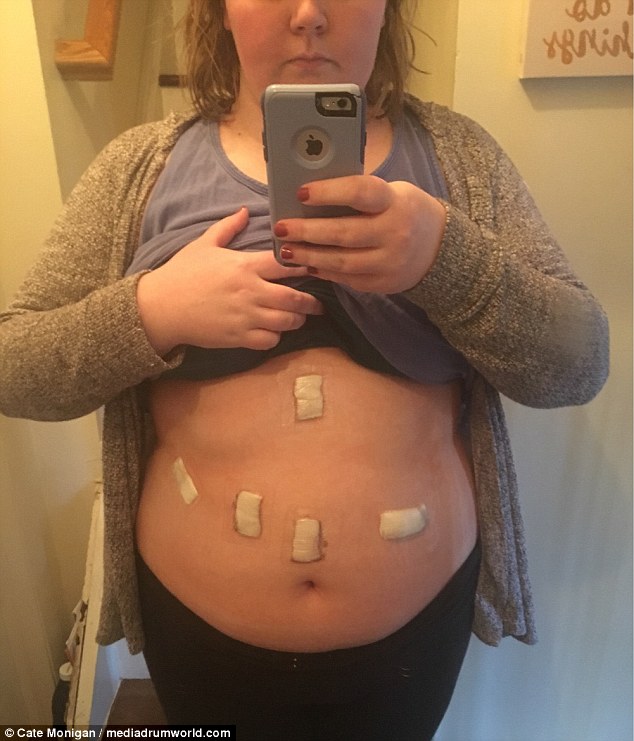 Change: The 25-year-old from New York was always overweight growing up and tried her first diet when she was eight while her mother would try to encourage her to eat healthily

‘I have been overweight for most of my life. My first diet was age eight – It failed. I remember being twelve and my mom suggesting that I talk to my aunt about joining Weight Watchers with her,’ Cate said.

‘My mom always tried to push me towards healthy choices, but I always snuck food into my room, and would eat myself sick,’ she went on. ‘I struggled so badly with my body image. I essentially grew up with others telling me how to modify my body, and why.

‘Everyone had the best of intentions, but it took its toll on me. I never saw my body as anything good or beautiful. I saw my body as a monster I had to try like hell to get away from.

This extreme lifestyle led her to reach a peak weight of 297 pounds and a size 22 to 24.

It wasn’t until early 2017 when she was told by her doctor that she had polycystic ovary syndrome. PCOS is a condition which impacts how a woman’s ovaries function. The three main features are irregular periods, an excess of the steroid hormone androgen and polycystic ovaries.

She was also told she was pre-diabetic, which causes her blood glucose level to increase higher than normal but not as high as those with type two diabetes. 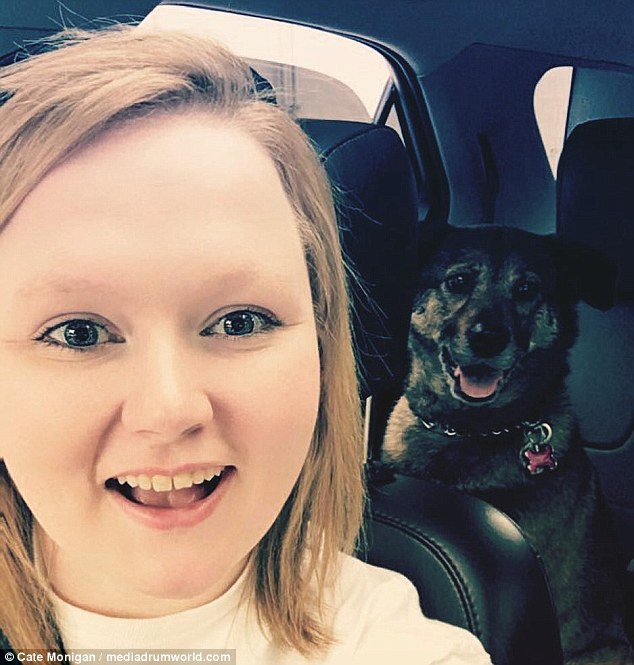 Life: The family services specialist would always secretly take food to her room where she would overeat and even admitted she would eat herself sick

Scary: In early 2017 she was told by her doctor that she had polycystic ovary syndrome (PCOS) and was pre-diabetic, which causes her blood glucose level to increase higher than normal

‘I was so unhealthy. I was pre-diabetic and I had PCOS which is common in women who are overweight, but it’s hard to manage and contributes to remaining overweight,’ she said.

‘I was staring at blood work that was telling me I was 0.2 away from being a diabetic, my thyroid was out of control with medication,’ she added. ‘Mentally, my mind was a mess. I was in such a bad place that I couldn’t fathom continuing the way I was living.’

Finally, she realized the seriousness of her health issues: ‘I needed to make a change that would be permanent because the yoyo dieting wasn’t working anymore, my health was out of control and I was sad all the time.’

In February 2017, she made the decision to have vertical sleeve gastrectomy, in which a large part of the stomach is removed to reduce its size. Her weight shrunk to a healthy size of 162 pounds and a size six to eight.

‘I had a vertical sleeve gastrostomy and it was the single best decision I could have ever made for myself. I’ve lost approximately 130 pounds since my highest known weight.

Surgery: Hearing she was pre-diabetic with PCOS made her realize the seriousness of her health so in February 2017 she had a vertical sleeve gastrectomy 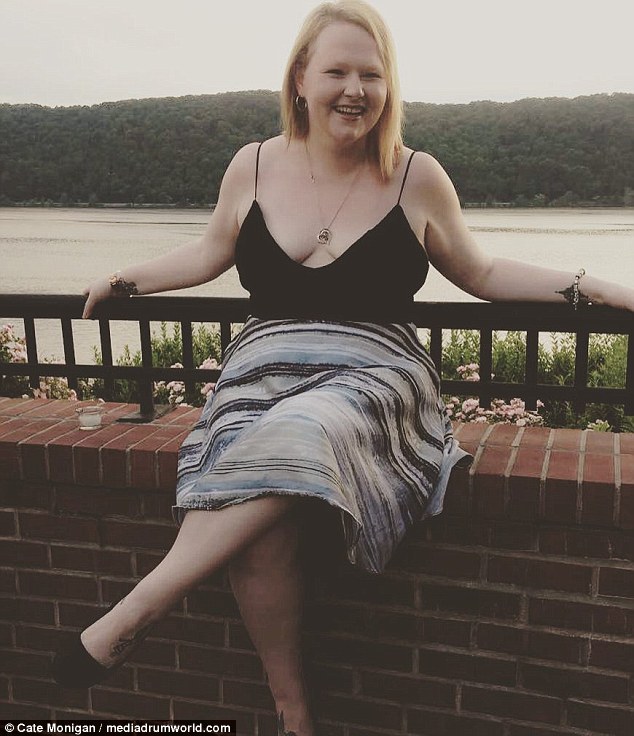 Amazing: The surgery removed a large part of her stomach to reduce its size and her weight shrunk to a healthy weight of 162 pounds and a dress size of six to eight 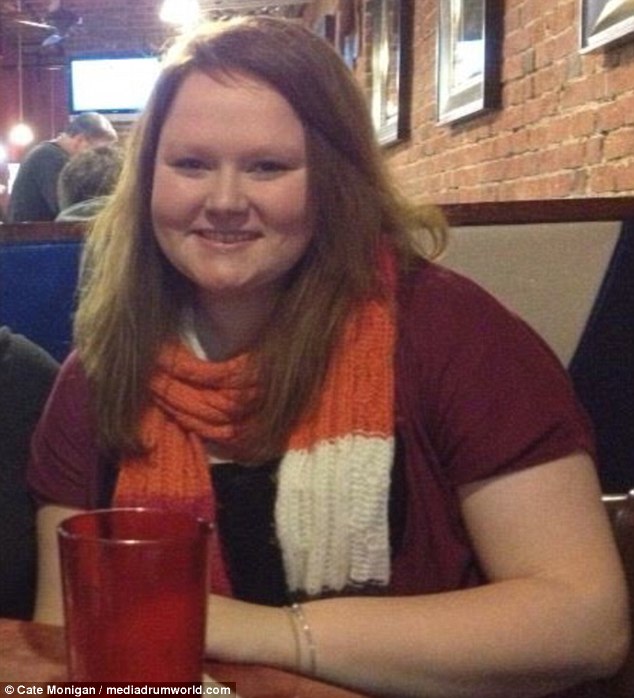 Operation: Cate said the sleeve was the best decision she ever made because she has since lost over 130 pounds since her highest known weight

‘That will change anyone’s life and mine changed dramatically. I feel better in my own skin. I’m so much more active, and I say “yes” to things I would have probably said no to before.

‘I feel better about myself overall and I think that that allows for more positive relationships. I can wear the clothes I want and feel good in them. I feel like I’m becoming the person I’ve always wanted to be.’

From previously overeating, Cate has now adjusted herself to following a low carbohydrate and low to no sugar diet, as well as incorporating five to six exercise sessions a week that focus on high intensity interval training cardio.

The reactions from her peers have proven to be a difficult bi-product of her successful weight loss journey, but she says she has also been receiving a lot of support from strangers.

‘The hardest thing was probably the backlash I got from some people about how I chose to lose it. I got it from people I didn’t anticipate having to explain my reasoning to,’ she said. 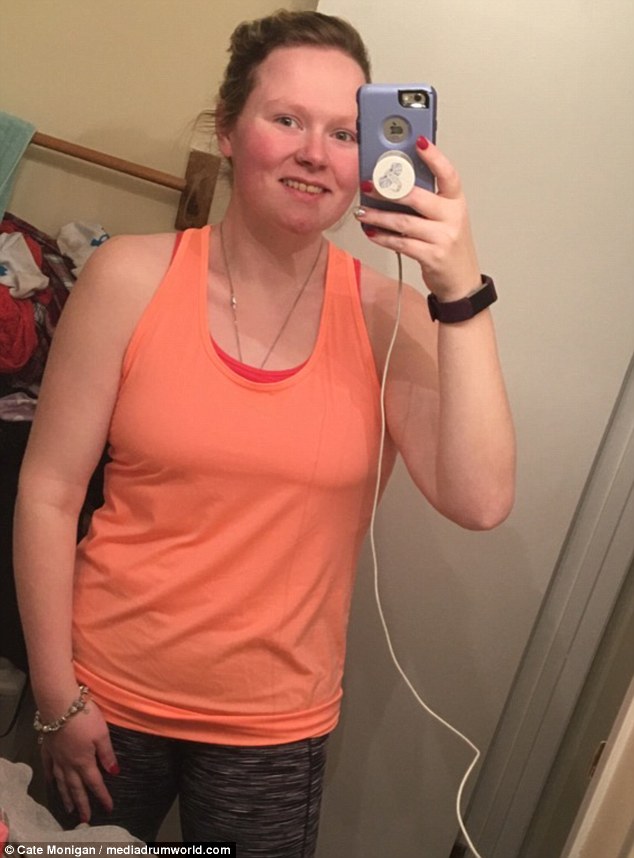 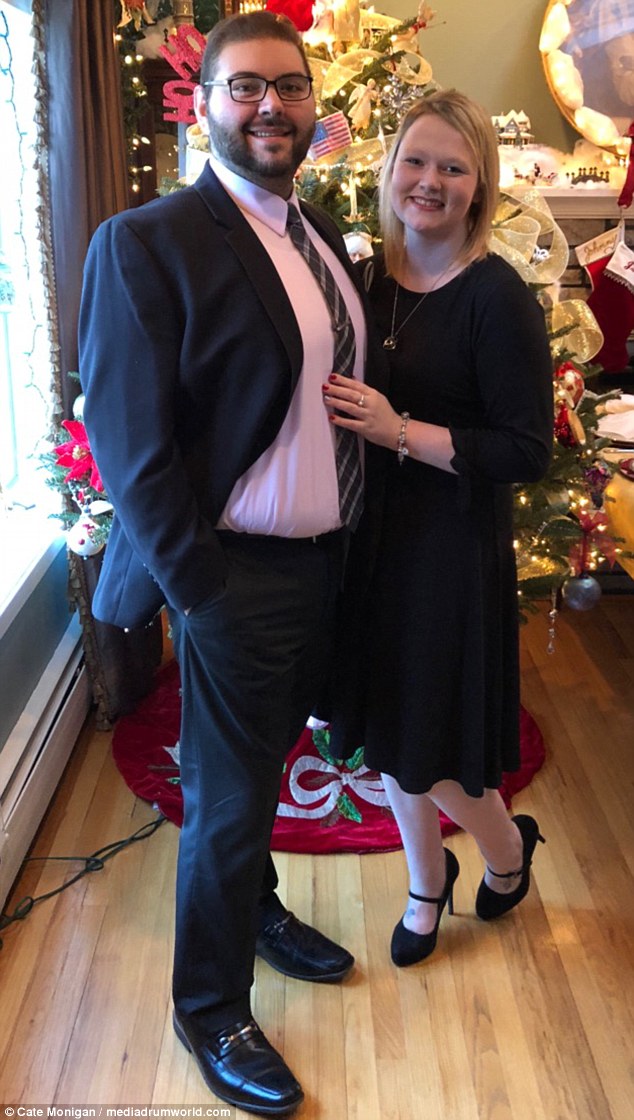 Love: Cate pictured with boyfriend, Jeffrey Jennings, is now happier than ever 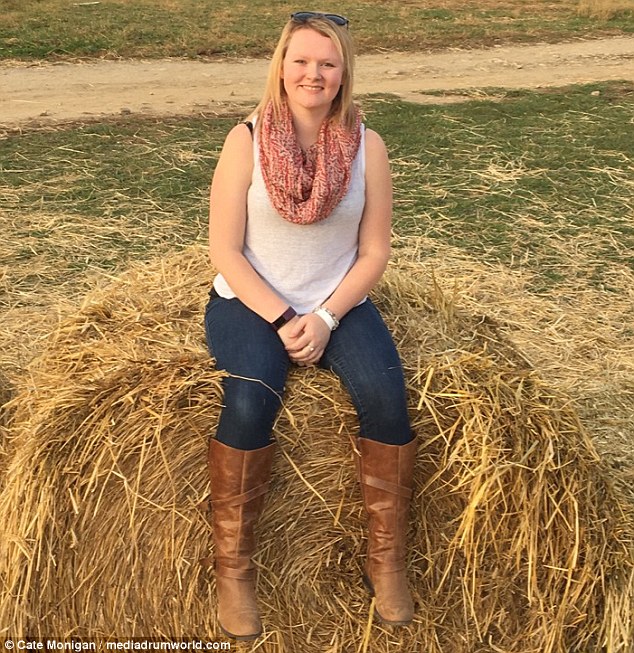 Journey: Cate shared advice for others who are overweight, ‘You have to make a conscious decision to want to change and want to do something different something better’

‘That was truly challenging. However, the support system I did have was incredible. As far as complications from surgery, I had zero problems.

‘I get told that I look great and when people ask how I did it, I tell them I had surgery and tell them about my diet and exercise modifications.

‘I’ve had some people that I haven’t seen in a while not recognize me and then not believe me when I tell them it’s me.

‘You have to make a conscious decision to want to change and want to do something different, something better.

‘If it’s surgery, or a plan like Weight Watchers, or consulting with a physician, it doesn’t matter. What does matter is that you’re doing it for you.

‘A little bit of progress and work every day goes a very long way. When you look back in a month, you’ll surprise yourself.’

Cate now tracks her new lifestyle on her Instagram which is dedicated to her weight loss journey.