A woman who was the first on the scene of a fatal accident that killed a three-month-old boy has penned an emotional letter to his parents.

A car was travelling south along the Kwinana Freeway last week when it crashed north of the Safety Bay Road exit in Baldivis in Perth’s southern outskirts.

A woman, only known as Jo, was driving home from work when she came across the tragedy.

A woman, only known as Jo, was driving home from work when she came across the tragedy 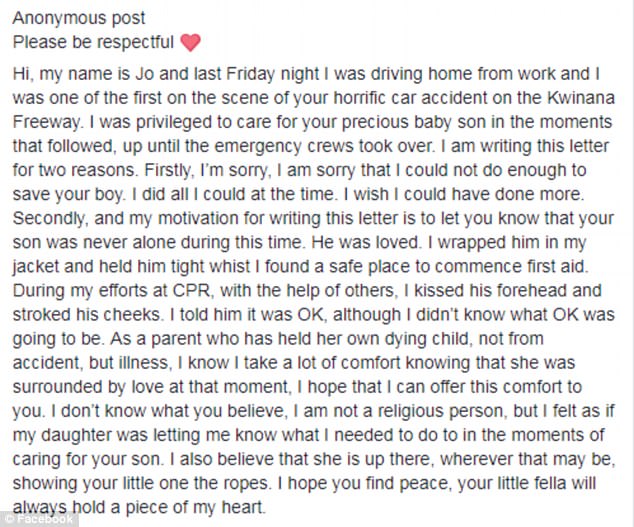 ‘Hi, my name is Jo and last Friday night I was driving home from work and I was one of the first on the scene of your horrific car accident on the Kwinana Freeway,’ she wrote on Facebook.

‘I was privileged to care for your precious baby son in the moments that followed, up until the emergency crews took over.

‘My motivation for writing this letter is to let you know that your son was never alone during this time.’

The woman said she cared for the dying boy the best she could in such difficult circumstances.

‘He was loved. I wrapped him in my jacket and held him tight whist I found a safe place to commence first aid.

‘During my efforts at CPR, with the help of others, I kissed his forehead and stroked his cheeks. I told him it was OK, although I didn’t know what OK was going to be.’

Police will investigate whether speed was a factor in a horrific car crash.

‘The maroon Holden Commodore sedan was travelling south along the Kwinana. The vehicle rolled and struck a lamp post, and it is believed the driver and two passengers were ejected from the vehicle,’ a Western Australia Police statement said. 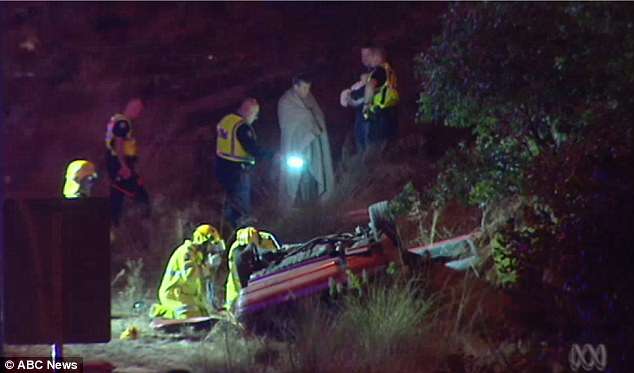 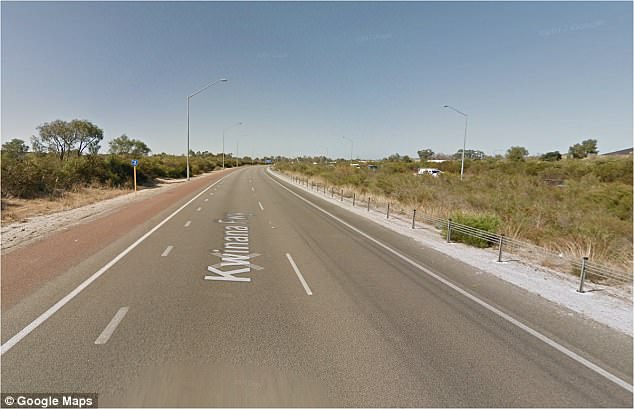 ‘Major crash investigators are investigating whether speed was a factor in the crash.’

The three occupants of the vehicle, a man, 20,  a woman, 18 and a three-month-old baby boy are all seriously injured.

The baby boy was rushed to Rockingham General Hospital and later transferred to Princess Margaret Hospital but later died.

The man and woman were taken to Royal Perth Hospital and are understood to be the baby’s parents, the ABC reports.

Police believe the maroon Holden Commodore sedan may have been driving from Success to Baldivis prior to the crash.

‘It is believed a vehicle of similar description had been driving in an erratic manner in the area prior to the crash, and anyone who saw a maroon sedan driving in such a manner between 10pm and the time of the crash is asked to come forward and make contact with the crash investigators,’ the police statement said. 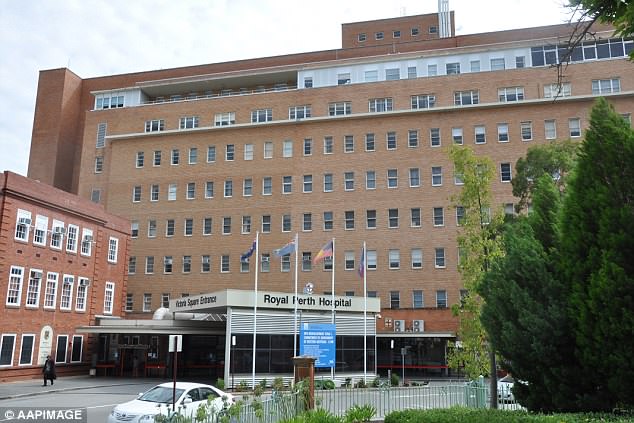 A young man and woman, believed to be the baby’s parents, were also seriously injured in the crash and taken to Royal Perth Hospital (pictured)