A woman who claims she was raped by Sydney’s notorious Skaf gang said she had begged her attackers to end her life, not knowing how she would be able to move on from the horror.

Jess was one of six women who were gang-raped during a 20-day rampage which shocked the city just before the 2000 Olympics.

Nearly 20 years on, the woman’s voice shakes and her eyes well up with tears when speaking about the attack.

‘By the end of it, I begged them to kill me,’ she told A Current Affair.

Jess said she had chosen to come forward and speak out about her traumatic experience in the hopes it would help her move on.

Pack leader Bilal Skaf was sentenced to a record 55 years prison for his crimes by now-retired judge Michael Finnane, who said he believes it is possible there were more victims.

‘I felt pretty certain they’d done it to others,’ Michael Finnane said.

One of the gang’s victims, an 18-year-old woman, was raped 40 times by 14 men over four hours in an attack coordinated by mobile phone. She was then dumped at a train station after being hosed down.

Many of the rapists have never been identified and police fear there were more victims who did not come forward.

Mohammed Skaf lured a 16-year-old girl to a park in Greenacre in August 2000 after convincing her he would drive her to look at the Sydney Harbour Bridge.

Instead, she was met by him and two men she didn’t know, with each of them pressuring her to have sex with them.

When she refused, Mohammed Skaf called his brother, Bilal, who arrived in a van with 11 other men, who would never be identified.

They dragged her to the middle of the park and ripped off her clothes, before Bilal and one of the men raped her while others laughed at her.

She eventually broke free and was rescued by a passer-by. 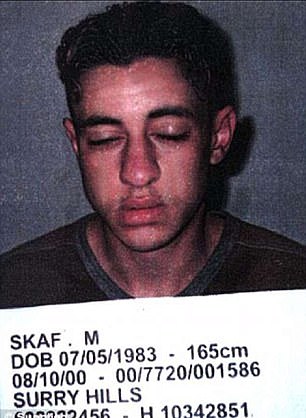 Bilal Skaf (left) was determined as the ringleader of the depraved gang who violated six young women in three pack rapes over 20 days. Mohammed Skaf (pictured) lured a 16-year-old girl to a park in Greenacre in August 2000, where she was gang raped

Mr Finnane compared the Skaf gang’s depravity to outrages committed by invading armies in times of war and said their crimes were ‘worse than murder’.

‘These were not random attacks and, in my view, they were aimed at creating terror in the community,’ Judge Finnane said.

‘It seemed clear to me that these men were sending out a message to the community in Sydney. Skaf and the members of this gang clearly wanted public recognition for what they had done.’