Roinn can still recall the horror she witnessed when she was 15 in graphic detail.

The man she called her father had ‘pounced like a lion on a gazelle’ and murdered her mother in front of her.

Roinn, now 23 and married with two children, witnessed Ben Cooper, now 43, attempt to sever Claire Marshall’s head with a cleaver in 2009, after slitting her throat with a pen knife just seconds earlier.

The tragic incident played out in Roinn’s childhood home in Millom, Cumbria, and has left her traumatised ever since.

Talking about the horrific murder for the first time to presenter Maya Jama for the 5STAR documentary When Dads Kill, Roinn said she is still haunted by the memories of that day.

‘The only way I could describe it, in the police interview, I said it was like a lion stalking his pray,’ Roinn explained of the moment her mother’s ex turned up at their house unexpectedly in January 2009. 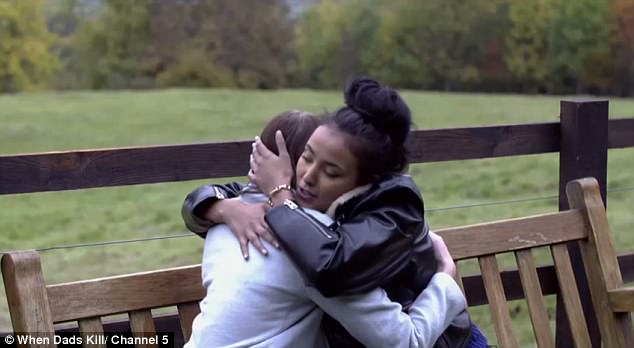 Despite her mother ending her relationship with Cooper following years of domestic violence, he still wanted to see Roinn and her sisters Rebecca, now 19, and Hanna, now nine, and turned up unexpectedly at their home on the day of the brutal attack.

‘He was following my mum with his eyes, pacing up and down the room just watching her.

‘My mum didn’t have any inkling of what was going to happen, there were no arguments, everything was calm.

‘He basically pounced. It was like a lion pouncing on to a gazelle. And he started punching her.’

Returning to the house of horror 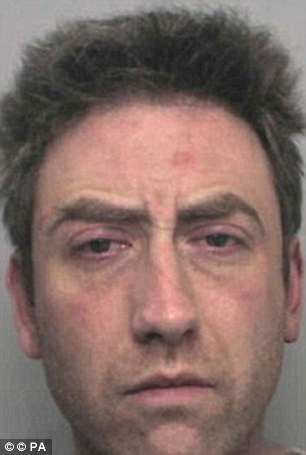 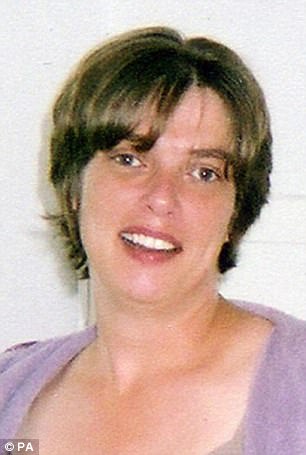 Claire Marshall, 35 (right) ex-girlfriend of Benjamin Cooper (left) was killed at her home in Cumbria in January 2009

Roinn told how she was in the house with her younger sister, and the moment he began hitting her mother she quickly took her sister out of danger and round to their neighbours.

When Roinn returned to the house she saw that her mother’s throat had been slit, and Cooper was in the process of grabbing a knife and attempting to remove her head.

‘The only thing he seemed to be doing was trying to take her head off. He very nearly succeeded.

‘They did say that I was quite lucky because I went back into the house, I could have been a victim.’

Roinn explained to Maya as the pair sat in the graveyard where her mother is buried that Cooper ‘didn’t care’ that the children were present and showed no remorse.

Roinn’s mother had 21 wounds to the head and neck, 12 to the right arm and eight to the left arm after the brutal attack. Cooper was charged with manslaughter and attempted murder, pleading diminished responsibility due to his mental illness. 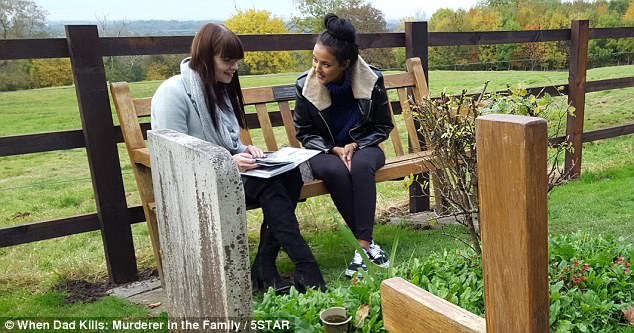 Cooper was the father of Roinn’s youngest sister Hannah, and despite splitting from Roinn’s mother he would still insist on visiting the house to see his daughter and her half-siblings.

There’s a reason Maya Jama chose to make a documentary exploring the impact on children who have a parent in jail – her own father was in and out of prison throughout her childhood.

She has spoken in interviews about the guilt she felt over seeing her father arrested for brawling, saying ‘in my child mind I thought it was because of me’.

Maya, 23, cut off all contact with her father aged 12 because ‘he kept doing bad things’, but met with him during filming for the documentary, and has said she now finds herself feeling ‘overwhelmingly sorry for him’.

Roinn said that she was aware that her step-father Cooper had been violent towards her mother.

But she said her mother had always shrugged off whenever Roinn asked about it.

Recalling the signs of domestic abuse, Roinn said: ‘She [her mother] was quite gaunt, until you look back on it you don’t actually know.

‘From what I remember he was alright, that was part of his act as a parent.

But when you look back you think, actually, not only was he controlling what we were wearing and what we were doing he was doing it to my younger sisters and my mum as well, it was everything.

‘We didn’t necessarily [witness violence], but we could hear her screaming, and I just remember my mum crying and screaming at the top of her voice on the landing with him over her with a knife. 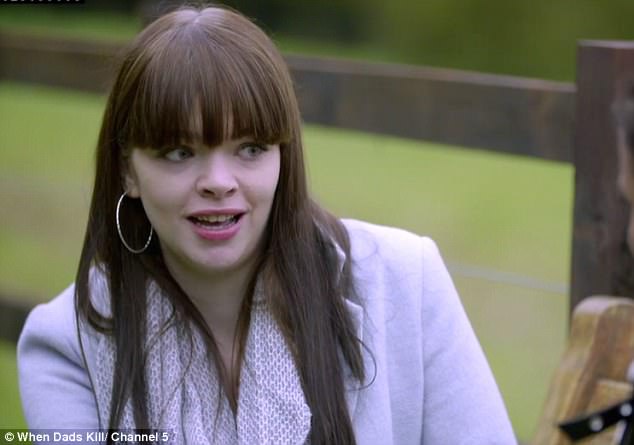 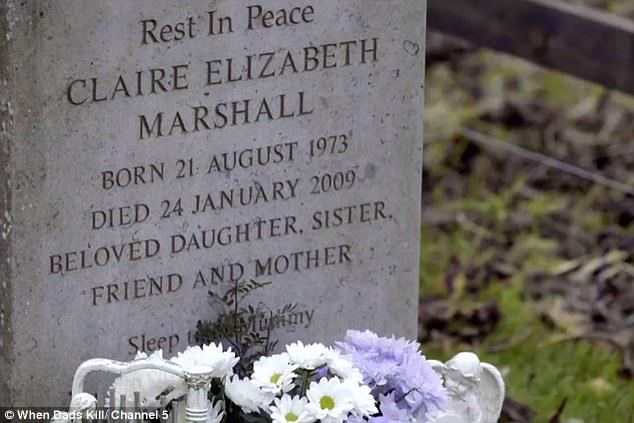 Roinn and her siblings were left without their mother, and she said it was ‘sad’ for her to be near her grave 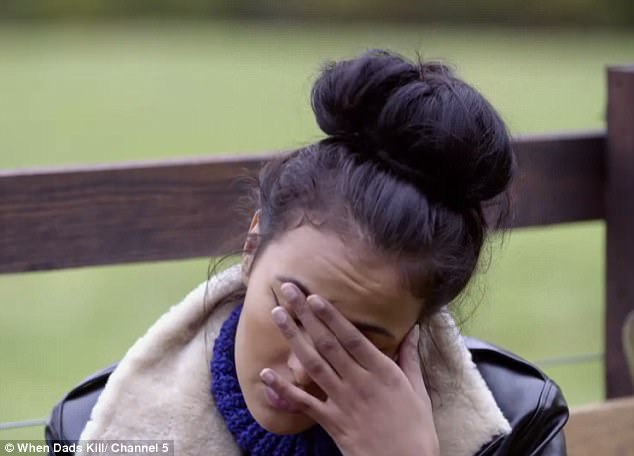 Maya was overcome with emotion listening to Roinn’s story, weeping as she listened to her recall in great detail the events of the murder

‘He just said “oh we’re just practising for Halloween”, like it was something you do.

‘She used to have black eyes, broken ribs, perforated ear drums. If you talked about it you would get “oh it’s nothing”. But that’s what happens in a domestic abuse relationship, they think it will change.’

Roinn explained that she and her sisters received therapy and counselling after her mother’s murder, and told how she was diagnosed with post-traumatic stress disorder.

She was offered an intense treatment plan to help her further deal with witnessing her mother’s tragic death, but Roinn told Maya it was something she would think about in the future.

‘I have got two boys and my husband. 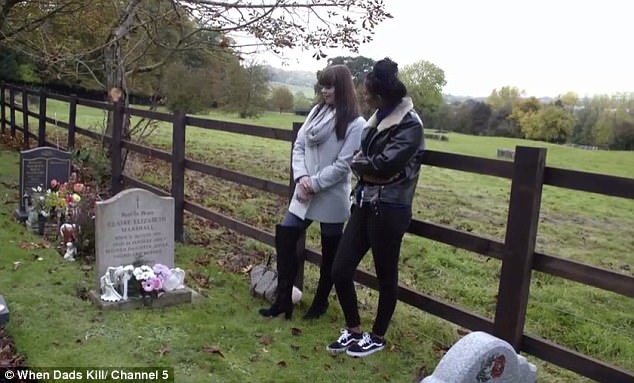 The pair spoke about the murder, and Roinn said that she had received counselling after being diagnosed with PTSD

‘They say they bring up stuff that you can’t remember, even if you can remember everything, there are little bits of it that you have blocked out that are horrible.

‘They’d have to open it up and dig deep and it could send you into spirals.

‘They don’t like doing it with young women or children, they rarely do it with military personnel.’

She added: ‘When my kids are a bit older and I can go down that path, I have made that promise to myself that I will do it.

When Dads Kills: Murderers in the Family is available to watch on Channel 5’s player