Woman with $16,000 collection of werewolf ‘babies’ made using her husband’s hair and REAL animal teeth tells This Morning the bizarre dolls are her ‘family’

A woman has revealed how she has spent $16,000 amassing a collection of dolls that resemble werewolf ‘babies’ on This Morning.

Yvette Solomon, from Los Angeles, is the proud mother of 16 werepups – dolls that have been created to look like small werewolves, who she considers her ‘family’.

Yvette said many of the dolls have been made using her own or her husband’s hair, while one has been fitted with the teeth of a dead cat, which were donated by a friend. The pups have their own nursery and she said some of her ‘babies’ can cost $1,000 (£725) each.

During her appearance on the programme, Yvette insisted they are ‘real’ and said her ‘family’ is constantly growing larger.

Yvette Solomon, from Los Angeles, has revealed how she has spent $16,000 (£11,603) amassing a collection of dolls that resemble werewolf ‘babies’ on This Morning

Yvette’s first werepups were Elias, who was dolled up like a Queen’s Guard in honour of a recent visit to London and Talla, who wears a tutu.

She also has twins Jezebal and Anya, who each have a pentagon tattooed on their paws.

Another pup, dolled up like a skeleton, is called Voodoo Baby, and she also has Ezra, who is now somewhat fragile because he was the first one ever made by Asia.

Another werepup called Argyle has been made to look like a gorilla because, as Yvette explained, he is ‘trans’, or a werepup that identifies as a gorilla. 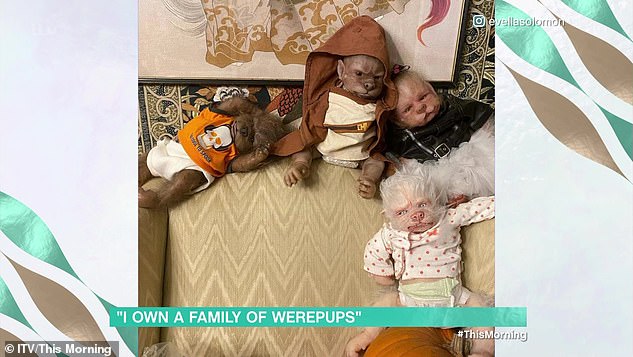 Yvette said many of the dolls have been made using her own or her husband’s hair, while one has been fitted with the teeth of a dead cat, which were donated by a friend

The werepups are made to order by US special effects artist Asia Eriksen, and can come with a range of extras like tails or ears.

The creatures are crafted by using real animal parts, with Yvette saying: ‘Some of Elias’ hair is real – I sent the artist some of my own hair and some of my husbands. Some is real human hair.

‘Some have dog hair. Anything you can punch – because it’s punched in one hair at a time.’ 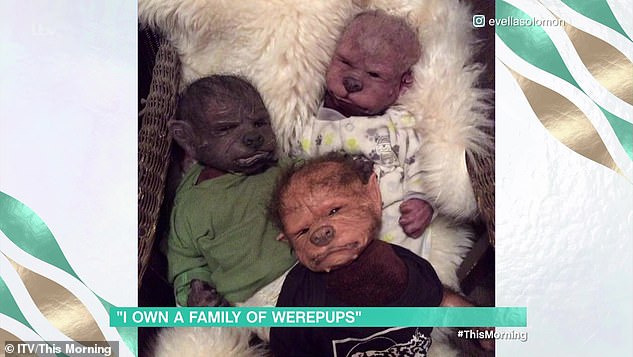 Cuddling another of the werepups, she said: ‘He has tiny little cat teeth, my friend Tracey has a farm and she has several animals who have died, so she dug up a cat and gave me his skull and I sent it to Asia and now he has little cat fangs.’

She said she was inspired to buy the ‘werepups’ because she ‘loves horror stuff’, adding: ‘The first time I saw them was at a horror convention. They’re cute, they’re fun, it’s fun to take them out in public and freak people out.’

Yvette revealed she gets ‘all kinds of reactions’ from strangers when she goes out in public with her babies and recalled one incidence on holiday in Brighton with friends. 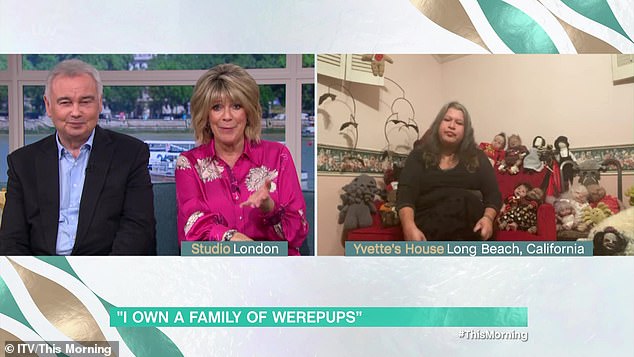 She said: ‘There were groups of children everywhere walking up and down everywhere.

‘A group of teenage girls were following us and staring at us. And I turned around and said: “This is what happens when you smoke when you’re pregnant”.’

Meanwhile Yvette added that only 13 of her werepups were at home because she had ‘a couple out running around the neighbourhood because it’s night-time. ‘

She added: ‘I have to lock the windows [when there’s a full moon] because the kids get a little wild.’