A woman has revealed her boyfriend broke up with her after discovering she had plastic surgery long before the two even met – insisting that ‘no real man’ wants to be with someone who is not ‘natural.’

The woman took to Reddit to open up about her boyfriend’s incredibly negative reaction to her plastic surgery – while asking if she was an a**hole for not disclosing to her partner that she’d previously gone under the knife.

Posting under the username MaxineLu7, the 26-year-old, who has had both a nose job and a boob job, revealed to members of the social platform that her boyfriend stormed out of the room upon learning about her procedures, and told her that he needed to ‘reconsider’ the relationship.

In a thread titled, ‘Am I the a**hole?’ she revealed she had been dating her boyfriend Max, 25, for four months, before detailing the moments leading up their break up.

A 26-year-old woman took has revealed her boyfriend Max, 25, broke up with her after discovering she had plastic surgery because she was not ‘natural’ (stock image) 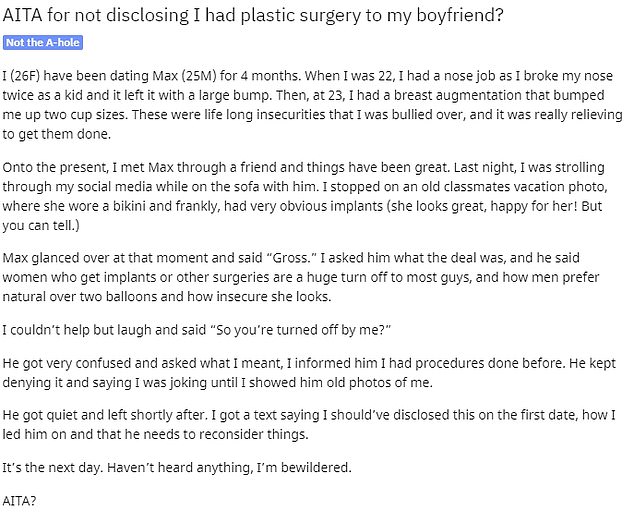 The woman, who goes by MaxineLu7, took to Reddit to question if she was an a**hole for not sharing her procedures on the ‘first date’

She began by explaining that when she was 22, she got a nose job because she had broken her nose multiple times as a child, and added that she also underwent a breast augmentation, sharing that it was an ‘insecurity’ of hers.

‘When I was 22, I had a nose job as I broke my nose twice as a kid and it left it with a large bump.

‘Then, at 23, I had a breast augmentation that bumped me up two cup sizes. These were life long insecurities that I was bullied over, and it was really relieving to get them done,’ she explained.

Do YOU think she should have disclosed her procedures on the first date?

Detailing the moments she realized she had ‘dodged a bullet’, she said: ‘Onto the present, I met Max through a friend and things have been great. Last night, I was strolling through my social media while on the sofa with him.

‘I stopped on an old classmates vacation photo, where she wore a bikini and frankly, had very obvious implants (she looks great, happy for her! But you can tell.)

‘Max glanced over at that moment and said “Gross.” I asked him what the deal was, and he said women who get implants or other surgeries are a huge turn off to most guys, and how men prefer natural over two balloons and how insecure she looks.

‘I couldn’t help but laugh and said “So you’re turned off by me?”

‘He got very confused and asked what I meant, I informed him I had procedures done before.

‘He kept denying it and saying I was joking until I showed him old photos of me.

‘He got quiet and left shortly after. I got a text saying I should’ve disclosed this on the first date, how I led him on and that he needs to reconsider things.

‘It’s the next day. Haven’t heard anything, I’m bewildered,’ she said.

Reddit users were quick to come to her defense and slam the man for his ‘shallow’ mindset, while others branded his behavior a ‘red flag.’

Other users advised the woman to drop him and added that she ‘dodged a bullet’, saying that she ‘lucked out’.

‘You lucked out that he showed you this side at four months in. You could have been married before you found out he’s this shallow/misogynistic,’ one user wrote.

One user said: ‘His expectations of disclosure on a first date are ridiculous. You have a right to privacy and he doesn’t get to judge you by your choices until he knows you better.’

Another added: ‘You don’t have to disclose anything about medical stuff (even when you did it for just the aesthetics). If you feel great about your looks that is the only thing that matters. And if he loved you he would not matter that you wanted to have the surgeries for your own good. Who is to judge? He is not. Only you are.’

‘His reaction and comment that you “should’ve disclosed this on the first date” makes him childish,’ one user commented.

Reddit users were quick to come to her defense and slam the man for his ‘shallow’ mindset, while others branded his behavior a ‘red flag’

Another user criticized Max and other men who claim to want a ‘natural woman’ without any clue as to what that means.

‘Reminds me of all the men who share pictures of women with a full face of makeup that’s “beachy” or “natural” and then claim they only like women who wear no makeup.’ commented one user.

After receiving over 1,000 comments from users who were sent into a furious rage over Max’s behavior, the woman posted an update on the situation.

She revealed that Max ended up doing a U-turn on the break-up, ultimately texting her and asking to ‘meet up’, before adding that the input from Reddit users made her realize ‘he’s not the partner [she’s] looking for.’

The woman then gave another update sharing that Max had texted her and dumped her after she revealed she was upset over his ‘misogynistic’ comments.

Max said: ‘I was hopeful we could start over on an honest beginning, but I guess only one of us is mature enough to look past each other’s shortcomings in the relationship.

‘I’m glad you revealed this about yourself before I got too involved. Goodbye, good luck finding someone cause no real man would respect someone who can’t even respect their own body.’

And while the woman may be out of a relationship, she noted that she was ‘content’ with her ‘natural and unnatural parts’, adding that she will find someone ‘who doesn’t have huge hang ups on plastic surgery.’

‘That looks like testicles’: Kendall Jenner’s $7,750 padded bomber is mercilessly mocked on Instagram, as critics joke the puffy leather jacket resembles ‘a scrotum’

Boy, 10, will go without Christmas and birthday presents for six YEARS after running up a $300 Fortnite bill on his grandmother’s credit card