A woman has revealed how her love rat husband was cheating with another woman as she was nursing her terminally ill mother – and left her just one day after she died from pancreatic cancer.

Nicola Funnell, 44, from Horam, East Sussex, told how she met her husband Ian online in 2011 and fell for him instantly.

The pair married in July 2013, which Nicola describes as the ‘happiest day of her life’.

However, four years on, in February 2017, her world collapsed when when her mum Marion, 74, was diagnosed with terminal pancreatic cancer and given just a few months to live.

Speaking to FEMAIL, Nicola, whose broken heart led her to lose nine stone, said: ‘Mum and I were incredibly close and I couldn’t bear the idea of life without her.

A woman has revealed how heartbreak led her to shed nine stone when her husband left her the day after her mother died. Nicola Funnell, 44, met her husband Ian online in 2011 and fell for him instantly. Here they are pictured on their wedding day in 2013 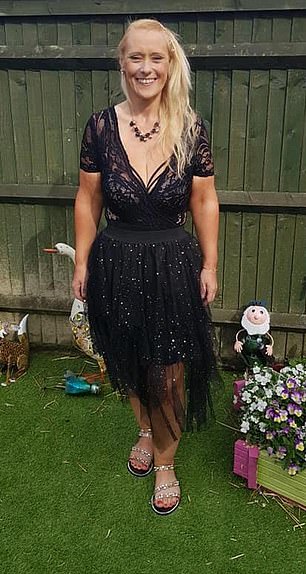 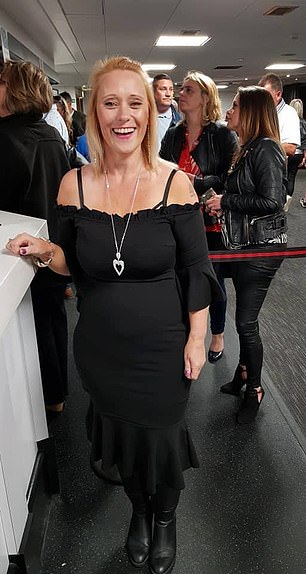 Despite her heartbreak, Nicola revealed she’s feeling happier and healthier than ever after losing nine stone when her husband left her the day after her mother died

‘For the next six months, I spent almost every day at my mum’s bedside in hospital and when she died in July 2017, I was devastated.

‘Ian had been my rock throughout Mum’s illness but when I called him to break the tragic news, he was cold and uninterested.’

But Nicola’s gut told her something was wrong, and the next day, she discovered she was right.

‘The day after my mum’s death, Ian suddenly packed his things and left without so much as a word,’ she explained.

‘I’d needed Ian then more than ever, instead, he saw my being in hospital with Mum as an opportunity to cheat.

‘Ian explained his mistress was an old flame from 20 years ago, and that she’d left her husband for him too.

‘I wasn’t interested in his explanations though, as far as I’m concerned, they were welcome to each other. 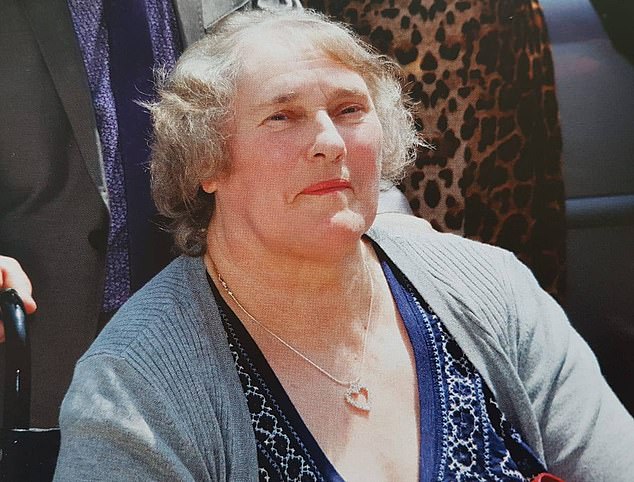 Four years after her wedding, in February 2017, Nicola’s world collapsed when when her mum Marion was diagnosed with terminal pancreatic cancer and given just a few months to live. Her mother is pictured here on Nicola’s wedding day 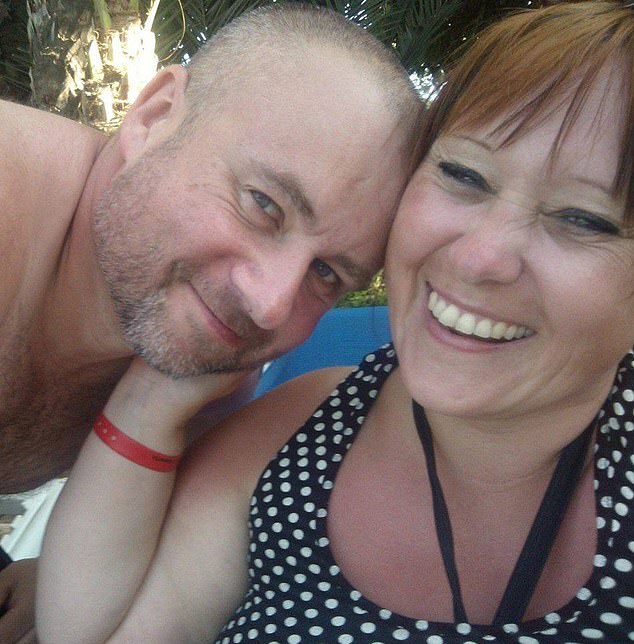 Nicola added that she distanced herself from Ian when he said he met his ex-partner online, but added that after his persistence she agreed to meet for a second date

Now, Nicola says she’s moving on, is currently saving for a divorce and has even lost a staggering nine stone after a gastric sleeve operation.

‘I’m happier and healthier than ever,’ she explained. ‘But I can never forget the moment I discovered that while my beloved mum was dying, my cheating hubby was lying’.

Describing how they met, Nicola said: ‘I was scrolling through my phone while watching a programme on television when a notification popped up on my screen. It was from Ian Roberts, who had sent me a friend request.’

‘I clicked on his dating profile, quickly scanned through his pictures and messaged to ask if I knew him.

Nicola told how Ian, 46, seemed nice enough, so she accepted his friend request and carried on messaging him. 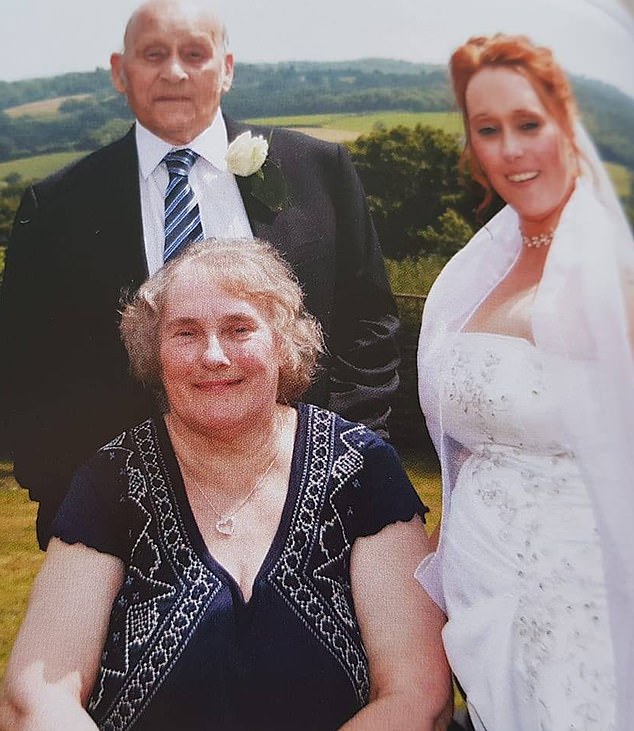 Nicola said her wedding was the ‘best day of her life’ and she was ‘heartbroken’ by her mother’s death four years later. She is pictured here on her wedding day with her parents 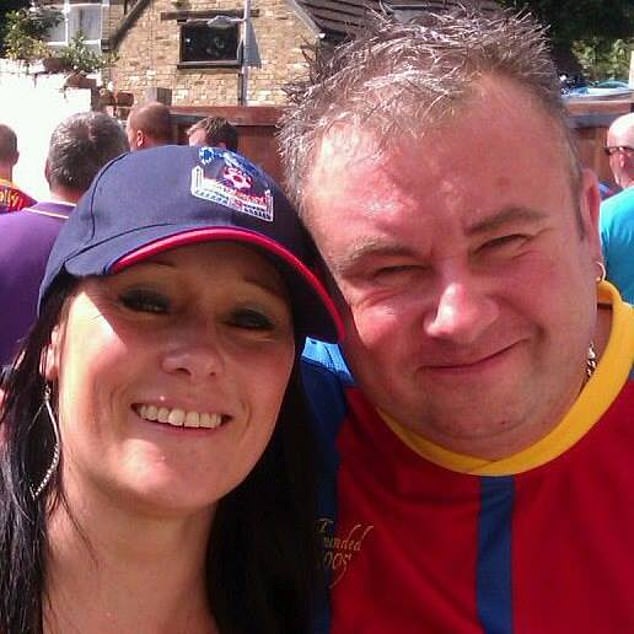 Within weeks of connecting online Nicola and Ian (pictured together) met up. They got on well instantly and sparks flew

The pair quickly realised they had ‘lots in common’ and when he suggested meeting in person, Nicola agreed.

‘In June 2011, we went for a drink and I was thrilled when I realised Ian was even better looking in the flesh,’ she said.

‘I cheated on my ex-wife’, he admitted as he took a sip of his pint. It was refreshing to see a man talk so openly about his past…

‘As we chatted away, it felt like I’d known him for years.’

‘He was so laid back and friendly. He seemed keen to get to know everything about me.

‘In return, he was incredibly honest about his past.’

She continued: ‘He admitted he cheated on his ex-wife but added that he really wasn’t happy and that marked the end of the marriage.’

‘He said he regretted it and would never do it again – and reassured me he’d learned his lesson.’

While Nicola says it was refreshing to see a man talk so openly about his past, it did raise a red flag.

‘I’d had my fair share of horrible relationships, and I couldn’t risk getting hurt again,’ she explained. ‘So I distanced myself for a few months.’

‘But Ian was persistent. He didn’t give up messaging me and asked me to see him again. So eventually I agreed to meet him for a second date.

‘When we met up, the spark was undeniable. Soon enough, Ian and I were inseparable.

‘Charming, hilarious and incredibly kind-natured, Ian seemed the perfect package. He treated me like a princess and was always spoiling me with fancy meals and thoughtful gifts.

‘Then within a few weeks of us being together, he told me that he loved me. It was fast – but it felt completely right.’

Within a few weeks of us being together, he told me that he loved me. It was fast – but it felt completely right. ‘I love you too,’ I said…

The couple moved in together after a few months and in July 2013, they tied the knot.

Speaking about her wedding day, Nicola added: ‘It was the happiest day of my life and it was made all the better by sharing it with my lovely mum, Marion.

‘Although her age and various illnesses meant she was in a wheelchair, she beamed all day and looked thrilled to be there.’

Ian and Nicola had four years of married bliss, but in February 2017, her life was thrown into turmoil. 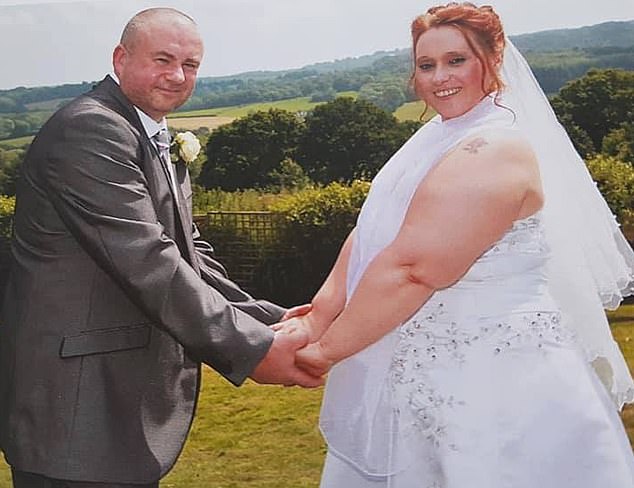 Within a few weeks of dating the pair told each other they loved each other – and moved into together after a few months. Within two years they wed. Pictured here on their wedding day

‘Mum called me out of the blue and told me some devastating news,’ she explained.  She’d been diagnosed with pancreatic cancer, and it was terminal.’

‘Doctors told her she had just months to live. Her words hit like heavy punches and I struggled to comprehend my life without my mum. We were so close.’

Trying to hold back the tears, Nicola reassured her mother she would look after her and that she wasn’t alone.

After hanging up the phone, Ian came rushing into the room to console her.

‘I told him my mum was dying and there’s nothing I can do about it,’ explained Nicola. ‘Ian said nothing, he just held me for hours as I sobbed.’

For the next six months, Nicola spent almost every day at her mum’s bedside in hospital.

Praising her husband for his initial support, Nicola added: ‘Ian was my rock throughout Mum’s illness, and I was so grateful for his support.’

‘It meant that between work and my hospital visits, we hardly saw each other. But I knew he understood.

When Nicola’s mum sadly died in July 2017, she was devastated.

‘I was by her side as she passed away, and naturally, Ian was the first person I called to break the tragic news,’ she said. ‘But to my surprise, instead of being sympathetic, he seemed cold and uninterested.’ 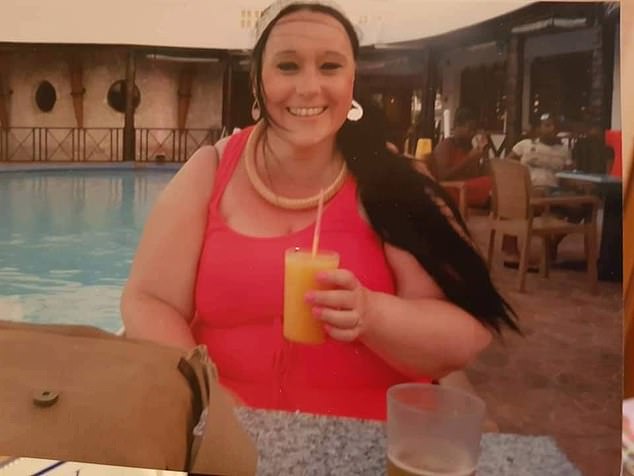 Ian and Nicola had four years of married bliss, but in February 2017, her life was thrown into turmoil. Nicola is pictured here on holiday

‘My gut told me something was wrong, and when I went home to him that night, he was distant.’

Nicola reasoned with herself that everybody grieves in different ways, and that maybe he was in shock. But then next day, she discovered her gut instinct was right.

‘The very next day after my mum’s death, Ian suddenly packed his things and announced he was leaving,’ she explained. ‘When I clocked his overnight bag, I stared at him with confusion.’

‘I asked where he was going and he told me he wasn’t happy anymore and had had enough. He added he’d had enough of the marriage and was leaving me.’

For the next few weeks, Nicola says she was inconsolable.

‘I begged Ian to tell me what was going on, but he refused,’ she said. ‘He couldn’t have picked a worse time. I’d just lost Mum, now my husband had walked out on me too.’

‘I was left to pick up the pieces of my broken marriage and plan Mum’s funeral, at the same time. It felt like my world was caving in. 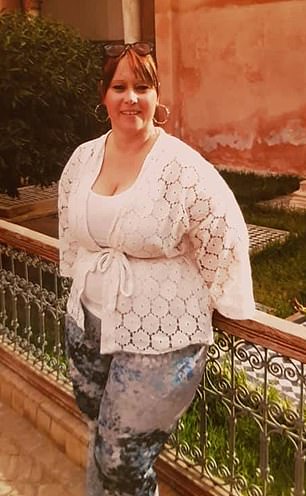 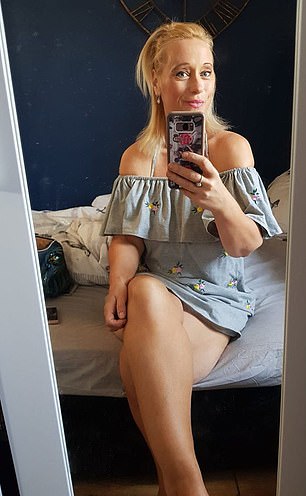 Nicola, pictured left before her weight loss and right now, said that she knew something was wrong instantly when her husband didn’t react to the news of her mother’s death

‘Swinging between grieving for my mother and my failed marriage, it was almost too much to bear, and it was made worse by Ian’s stone-cold silence.

‘I had no idea why he left, there had been no signs that he was unhappy. I knew I hadn’t been able to give Ian much attention while I was with Mum all the time, but I thought he understood.

After a few weeks, Ian finally agreed to meet up with Nicola at a pub to discuss things – which is when he admitted the real reason he’d left. He’d met someone else.

‘I was stunned when he revealed he’d met this other woman through Facebook, and that he’d been seeing her for six months behind my back,’ said Nicola. ‘Six months – the whole time I was nursing my dying mother. Rat.’

‘It was the hardest six months of my life, and I’d needed Ian then more than ever. But instead, he saw my being in hospital with Mum as an opportunity to cheat on me.

‘Ian explained his mistress was an old flame from 20 years ago, and that she’d left her husband for him too.’

But Nicola wasn’t interested in his explanations, as far as she was concerned, they were welcome to each other – and are still together now.

Since then, Nicola has gone on to lose a staggering nine stone, and revealed that she feels more confident than ever. 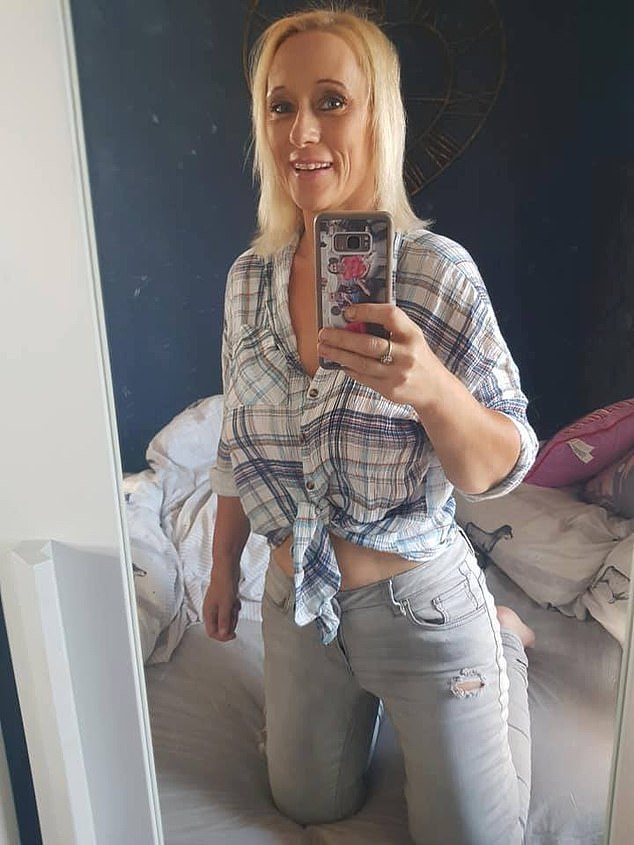 After shedding nine stone, Nicola has revealed that she feels more confident than ever

‘Ian’s betrayal made me feel worthless, but now, my confidence is through the roof,’ she said.

‘I’m happier and healthier than ever, I can flaunt my new body in figure-hugging outfits, and I feel like a completely new woman.

‘Ian betrayed me just as I needed him the most, and for that, I will never forgive him.

Speaking about his marriage, Ian said: ‘Yes, I left a very horrible, controlling marriage. I knew this person (the other woman) anyway from 20 odd years before.

‘We’d been together then, and it hadn’t worked. We just met, she was unhappy, we both were.

‘No, I don’t regret a thing. I’d had enough of being screamed and shouted at.

‘The reason I walked when I did was that I said I didn’t want to go to the funeral, and she was screaming vile stuff down the phone to me.

‘That was my final cue to leave. The affair means I got my life back.’