Woman reveals how having cancer has made her UNDATEABLE

A women claims that having cancer has made her undateable – and men have even ‘run a mile’ after they’ve discovered her illness.

Instead of fending off well-heeled suitors, Allison Daniels, 34, insists she is ‘undateable’ – all because she has had an extremely rare form of cancer.

‘I have the worst luck with men,’ said the well-educated woman, who lives on a country estate in St Albans, Herts and was diagnosed with an aggressive clear cell sarcoma primary tumour in 2012.

‘I can’t meet anyone, because I have such a random life, with check-ups every three months, to see if the cancer has returned.’

Attending the highly regarded private Strathallan School in Perthshire, Scotland – renowned for its academic prowess – she grew-up in a 54-room Highland mansion in Caithness.

Allison Daniels, 34, from Scotland, believes she is ‘undateable’ because she has had an extremely rare form of cancer, which she says sends men ‘running a mile’ 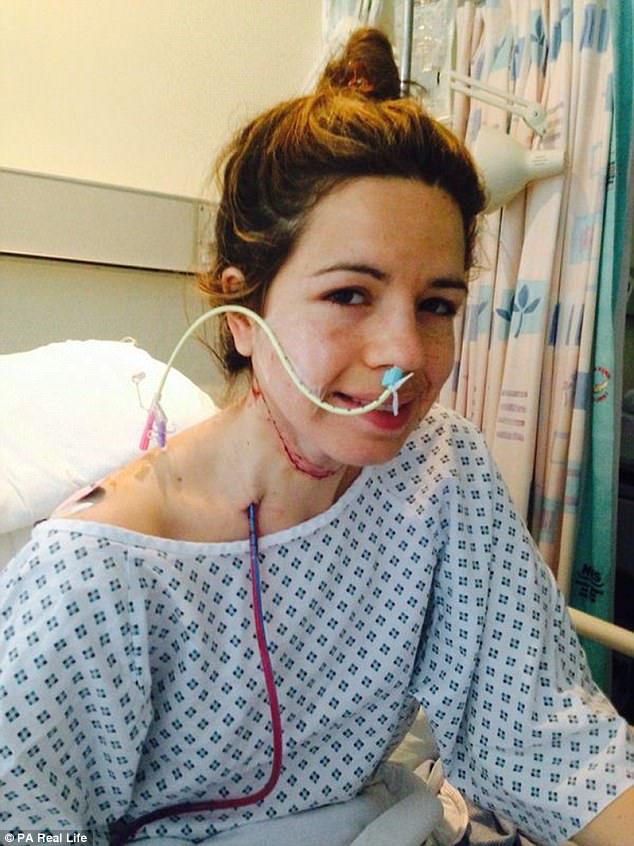 The aggressive nature of the cancer meant it returned in her neck and collar bone, almost two years later, and in her armpit last year. She has had operations and plenty of stints in hospital

Her society credentials helped secure her current job, looking after the children of a viscount and viscountess – as well as riding their thoroughbred horses – when she saw the job advertised in the equestrian bible, Horse and Hound magazine

Allison said: ‘Men run a mile when I tell them I’ve had cancer and it could come back.

‘Who wants to be in a relationship with someone who might die? It’s a death sentence.

‘And who can blame them? I’d say the same to my friends, not to date someone in a situation like I am in.’

Diagnosed with cancer in 2012, Allison was thought to be the first person in the world to have a rare and aggressive clear cell sarcoma primary tumour – a malignant growth that can develop in the soft tissue of the body – on her tongue.

Although the lump was removed, the aggressive nature of the cancer meant it returned in her neck and collar bone, almost two years later, and in her armpit last year.

Now she needs check-ups every three months, because of the high chance that it could come back again. Allison is also studying for a degree in dietetics at the University of Hertfordshire to educate herself and others on warding off cancer through healthy eating.

And despite having two long-term boyfriends of a year and three years since her diagnosis and meeting several other men since she started at the University of Hertfordshire in August last year, Allison says suitors do not stick around. 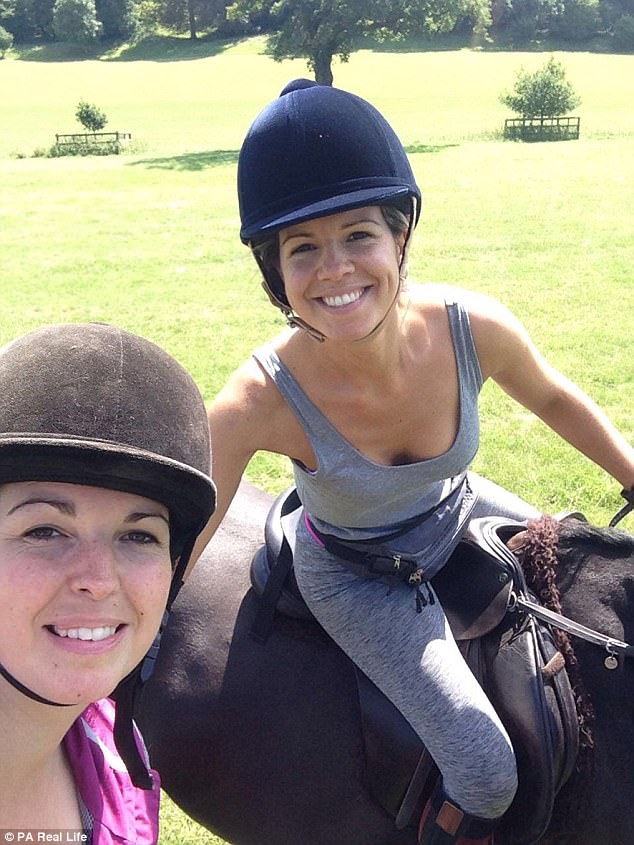 Allison now looks after the children of a viscount and viscountess, as well as riding their thoroughbred horses 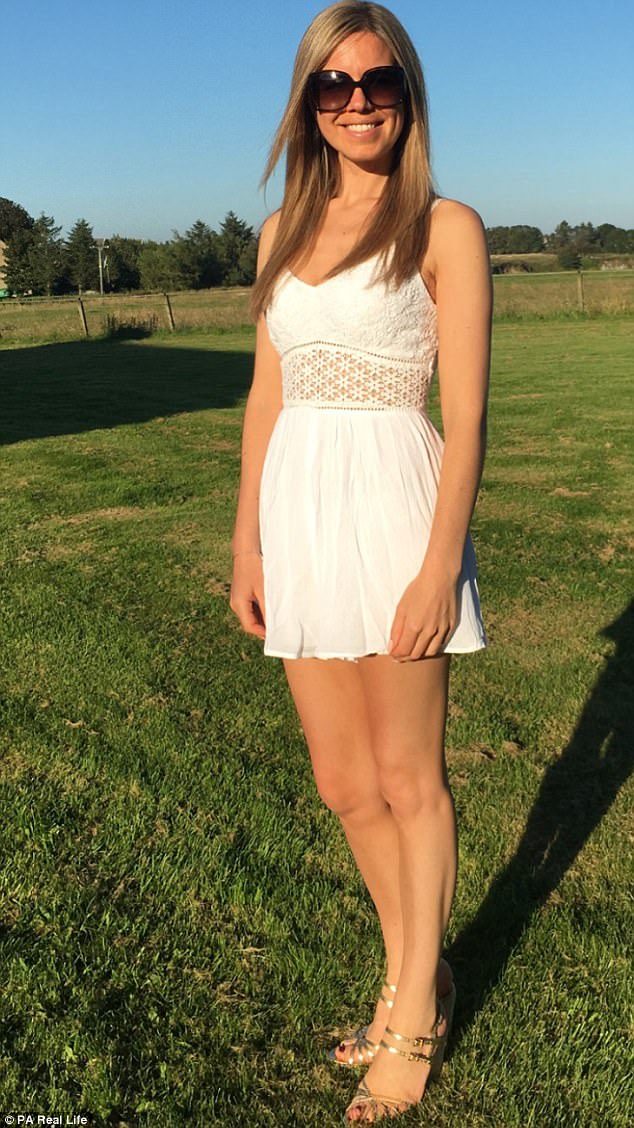 Allison was living in Galway, western Ireland, when she first noticed a small lump on her tongue 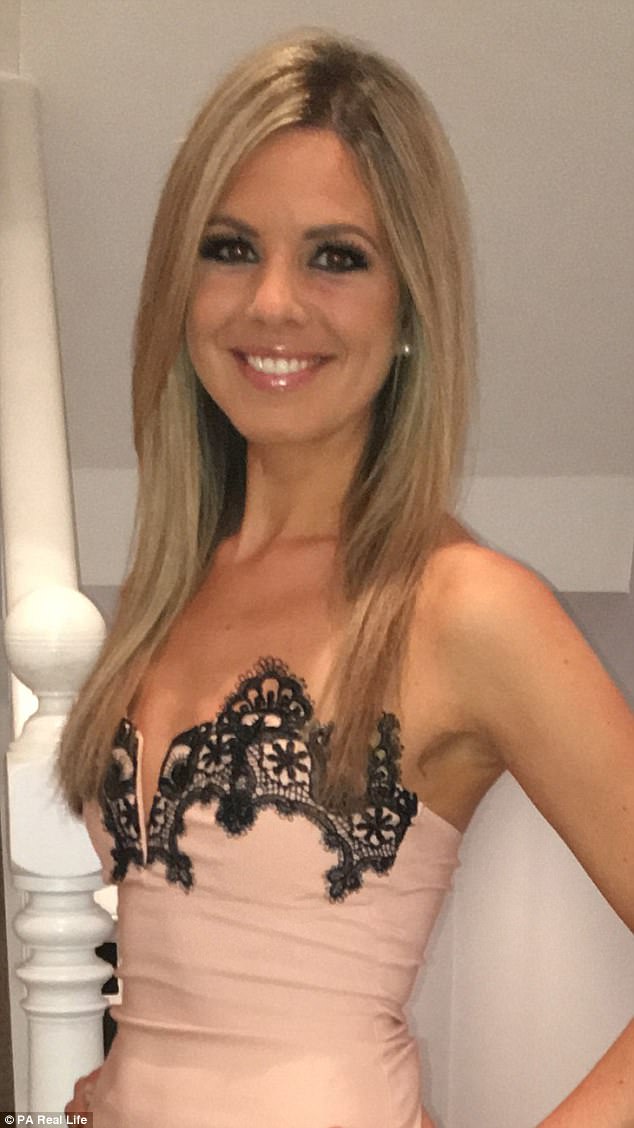 Discussing how she felt when she discovered the cancer, she said: ‘I thought I was going to die. I’d always been a really strong person, really sporty and never had anything wrong with me’

‘Cancer is a scary word, and a lot for someone to take on,’ said Allison, who normally meets men through dating apps or mutual friends, and tells them about her health history as soon as they start dating.

‘I’ve been dumped when men find out about the cancer.

‘It’s very disheartening, as I don’t want cancer to make me feel undateable or to define me.’

Discussing the type of man she goes for, Allison said: ‘They don’t even have to be that good-looking, just kind and down to earth. I just want to be with someone who cares about me.’

Allison was living in Galway, western Ireland, and working in the five star G Hotel, and dating an Irishman, when she first noticed a small lump on her tongue.

It was December 2011 and she put it down to food burning her mouth.

But by the January, the throbbing feeling had intensified, and Allison went to a doctor. 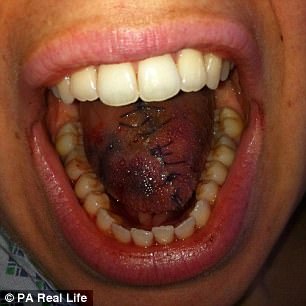 Allison’s tongue after the tumour was removed

Prescribed steroids, an anti-inflammatory, the pin-sized lump still started to grow, so she revisited her GP in Galway, who referred her to a specialist.

In March 2012, as she waited for her appointment to come through, during a 10-day holiday in Mexico to celebrate her mum Dawn’s birthday, Allison’s tongue started throbbing.

Worried about her daughter, Dawn, 65, made her promise to contact the hospital as soon as they returned home.

‘I remember laughing and saying to Mum, ‘it’s not cancer you know,’ Allison recalled.

After calling her GP and being told there was an 18 month waiting list to see a consultant, she decided to go private – seeing a specialist at The Galway Clinic two weeks later.

Then, 10 weeks after having a biopsy, she was given the devastating news that she had cancer.

‘The specialist said you don’t get a primary melanoma in your tongue, so they wanted to do an MRI scan straight away. At this point they thought it was a melanoma – a type of skin cancer that can spread to other organs in the body,’ she said.

‘I thought I was going to die. I’d always been a really strong person, really sporty and never had anything wrong with me.

‘I thought though if anyone can fight it, I can, but I was terrified at the same time.’

With her family living in the Scottish Highlands, Allison’s care was transferred to the then Southern General Hospital, in Glasgow – now the Queen Elizabeth University Hospital.

Medics confirmed she would need a part of her tongue removed and that the tumour would then be tested, to find out what sort of cancer it was.

She said: ‘That’s when I was given even more devastating news. It wasn’t a melanoma, but a rare and aggressive clear cell sarcoma. Devastated, I was crying my eyes out.

‘Doctors said they had never seen a primary tumour in the tongue before. It had never been documented anywhere in the world.

‘From then onwards, I just knew it wasn’t good. But still I couldn’t understand why I had it.

‘What they did know was that it’s very aggressive and has a high chance of coming back.’ 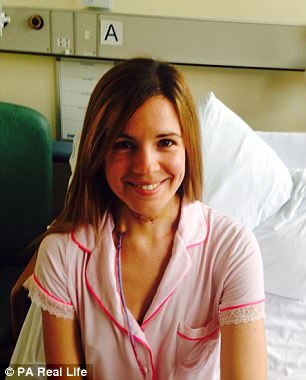 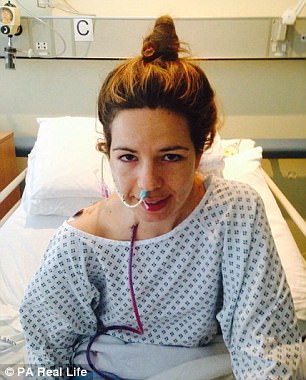 Going under the knife at Glasgow’s Queen Elizabeth University Hospital after a six hour operation, doctors believed she was tumour-free. Then a regular check-up in May 2016 revealed the cancer had spread to her armpit, meaning more surgery and this time radiotherapy

Fortunately, the cancer was removed from her tongue in its entirety, so Allison did not need chemotherapy or radiotherapy.

But she has needed check-ups every three months, which will continue forever, lessening to every six months once she is three years cancer-free.

Moving back to Ireland and resuming her hotel job, Allison did her best to get on with her life.

Sadly, in May 2014, the cancer returned – this time in her lymphatic system – her neck and on her collarbone – meaning she needed a neck dissection, a surgical procedure to remove the growths and further lymph nodes.

Going under the knife at Glasgow’s Queen Elizabeth University Hospital after a six hour operation, doctors believed she was tumour-free.

But sadly she was dumped by her boyfriend just a week after her the operation.

Then a regular check-up in May 2016 revealed the cancer had spread to her armpit, meaning more surgery and this time radiotherapy.

After it was removed, Allison started searching for work in St Albans, where she returned as her parents had run a successful printing business there years earlier. 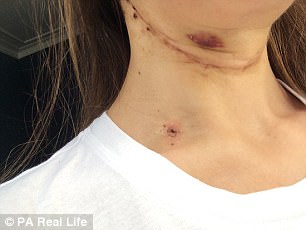 Allison shows her scars after neck dissection in 2014

Finding her current job through Horse and Hound, she became a live-in nanny to the viscount and viscountess’ children.

‘I grew up on an estate just like it, but in the north of Scotland, so it’s a home from home,’ she said.

‘My family home had a water mill, which my parents used for electricity and there were fishing lakes and lots of land to enjoy.

‘It started off as a holiday home, after my parents Dawn and Pete Daniels, 64, bought it really cheap following a bank repossession and did it up.’

Now, back on the dating scene and using the dating app Bumble – where only women are permitted to start the first chat – with an uncertain prognosis, Allison is keen to meet someone special and start a family, before time runs out.

She said: ‘I have a really positive outlook about my future and I am determined through eating the right things, like no processed foods, and understanding what is good for my body, to remain healthy for as long as possible.’

Allison, who has been supported by the cancer charity Maggie’s at their centre in Newcastle-Upon-Tyne, Tyne and Wear, has been told she needs to be three years cancer-free before she can carry a child.

This is because of the likelihood of the disease returning during this period, and as cancer treatment during pregnancy is far more complicated.

‘I can’t believe everything that I have been through,’ she reflected. ‘I would love to meet someone and become a mum.

‘But I have to go three years cancer-free before I can carry a child and at the moment, the stigma that comes with the illness, seems to be making me a dating pariah.’