Woman reveals ovarian cyst has made her look nine-months pregnant

A 24-year-old woman has stunned TikTok users after showing off what appears to be a baby bump – before revealing that her huge swollen stomach is actually the result of a giant ovarian cyst.

Raquel Rodriguez, from Minnesota, earned viral fame earlier this month when she posted a video of herself rubbing her enlarged stomach, while joking that she ‘looks nine months pregnant with one child’.

However, the TikToker brought new meaning to the phrase ‘appearances can be deceiving’ when she dropped the bombshell about her ovarian cyst, revealing that the condition has left her looking as though she is carrying a child.

Her brief clip – which Raquel says she shared in hopes of bringing levity to ‘her problems’ while raising awareness about the condition – racked up more than 1.3 million views and was flooded with comments, many of which voiced users’ astonishment that an ovarian cyst could cause such dramatic physical symptoms.

Surprise! A 24-year-old woman has gone viral on TikTok after showing off what looked like a baby bump, before revealing that her swollen stomach was actually caused by an ovarian cyst 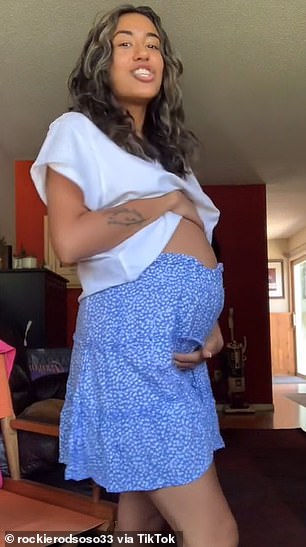 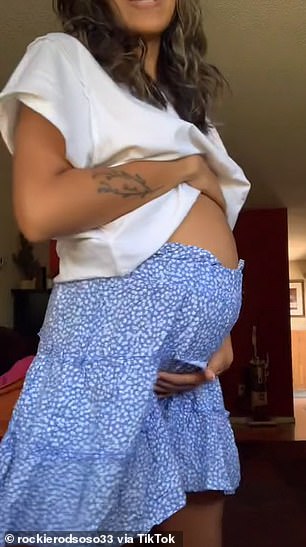 Joker: Raquel Rodriguez, from Minnesota, posted the video earlier this month, and in it she is seen jokingly rubbing her swollen belly while dancing around her home 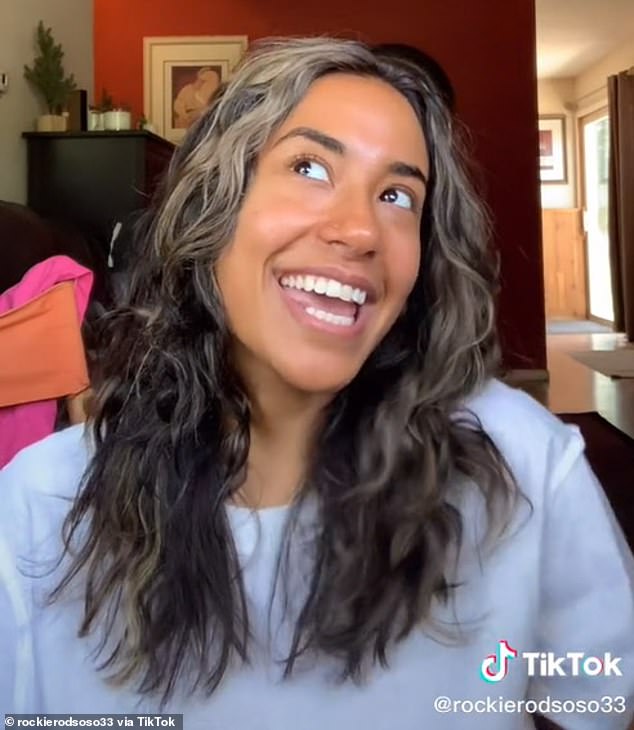 Sneaky: She wrote in a video caption that she ‘looks nine months pregnant with one child’

Raquel, who is a former preschool teacher, shared few details about her diagnosis in the original post, however she later revealed to Buzzfeed that she first discovered she had an ovarian cyst five years ago when she was struggling with a kidney infection.

She revealed that her kidney problems were so bad, they caused her to develop sepsis and left her with ‘really damaged kidneys’, a condition that required her to undergo regular internal ultrasounds. It was during one of these ultrasounds that doctors discovered her ovarian cyst – which is a fluid-filled sac located in or on the surface of an ovary.

At the time of her diagnosis, Raquel says her ovary was the size of a softball and while she admitted that it ’caused some concern’ at the time, it was not considered severe enough to ‘have a removal done’.

Instead, she made sure to ‘get it checked… every once in a while’, and over the past five years, the cyst had remained much the same size – until recently.

‘It stayed mostly the same up until I suppose recently,’ she shared. ‘I feel it’s gotten bigger pretty quickly.’

Ovarian cysts are actually incredibly common in women who have started menstruating and, in the majority of cases, they cause little to no discomfort and will eventually disappear on their own without requiring any form of medical treatment.

However, on rare occasion, ovarian cysts can cause a series of health complications and painful symptoms – particularly if the cyst has ruptured.

In cases like Raquel’s, a cyst can cause severe pelvic pain that can present as a sharp, stabbing sensation, or as a dull ache that is usually located on the side of the body where the cyst is located. 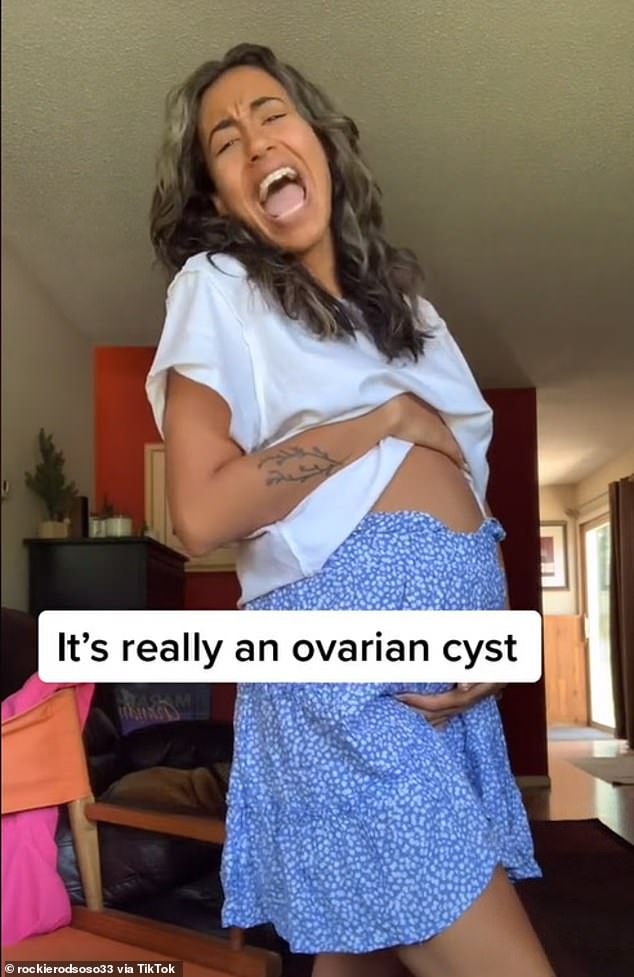 The big reveal: She soon revealed that her bloated stomach was the result of an ovarian cyst – which she was first diagnosed with five years ago 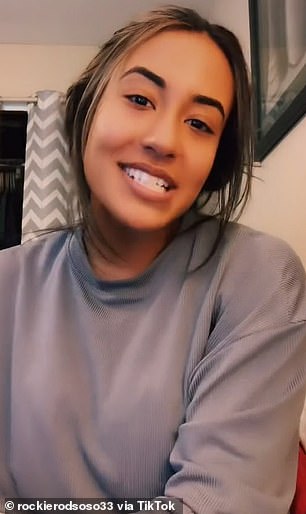 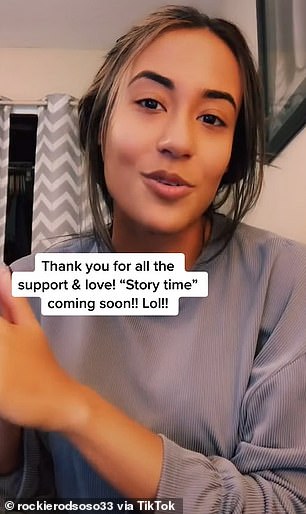 Evolution: Raquel says her cyst was the size of a softball when she was first diagnosed, adding that it had remained much the same size until very recently when she started bloating

Severe bloating is also a symptom of a large or ruptured cyst, as is a heavy or full feeling in the abdomen.

Patients are advised to seek immediate medical treatment if they start to experience any of these symptoms combined with a fever, vomiting, or any signs that they have gone into shock, such as cold, clammy skin, lightheadedness, or shortness of breath.

Raquel said she is now trying to find a doctors who will work with her to properly diagnose her condition – which she believes is related not only to her ovarian cyst but potentially to undiagnosed endometriosis, which she first has long believed she may suffer from.

‘Aside from my cyst, I think there are some other issues I have that may contribute to how I feel but have had no luck receiving a diagnosis [for endometriosis],’ she told Buzzfeed.

While she pursues medical treatment, the TikToker hopes that the viral success of her video will help to raise awareness about ovarian cysts – explaining that she was stunned how many viewers ‘weren’t aware that this could happen’.

‘It’s kind of embarrassing that [the video went viral] but at the same time, I’m really grateful that it did,’ she said in a follow-up post.

‘It’s amazing to me how many people weren’t aware that this could happen so I’m glad that it’s bringing awareness.’

Raquel also paid tribute to the dozens of other women who opened up about their own experiences with ovarian cysts and conditions like polycystic ovary syndrome and endometriosis.

‘I’m so excited about all my new “sisters” that I have,’ she continued. ‘I will be posting a story time and answering questions that have been commented, it’s just really overwhelming, but I’m getting there and I am really looking forward to sharing my experience.’

WHAT IS AN OVARIAN CYST

An ovarian cyst is a fluid-filled sac that develops on a woman’s ovary. They’re very common and don’t usually cause any symptoms.

Most ovarian cysts occur naturally and disappear in a few months without needing any treatment.

An ovarian cyst usually only causes symptoms if it splits, is very large, or blocks the blood supply to the ovaries.

Ovarian cysts can sometimes also be caused by an underlying condition, such as endometriosis.

The vast majority of ovarian cysts are non-cancerous (benign), although a small number are cancerous (malignant). Cancerous cysts are more common in women who have been through the menopause.

Surgical treatment to remove the cysts may be needed if they’re large, causing symptoms, or potentially cancerous.

In some cases, surgery to remove both your ovaries may be necessary, in which case you’ll no longer produce any eggs.