A woman who grew up in an ultra-conservative Christian sect has detailed how she left the fundamentalist group, came out as a lesbian, and wrote her first novel after her therapist helped her realize she was in a ‘cult.’

Elizabeth Hunter, 28, was raised by a family in Texas that belonged to the Institute in Basic Life Principles (IBLP) — also known as ATI — after being abandoned by her biological parents and rehomed.

The ministry founded by Bill Gothard promotes a patriarchal family system in which children are expected to follow his interpretation of Bible scriptures and always obey their fathers.

Hunter, who is known as @thatlizhunter on social media, has been opening up about her experience and answering questions about being raised with IBLP’s teachings in a series of TikTok videos.

Elizabeth Hunter, 28, has opened up about being raised in an ultra-conservative Christian ‘cult’ in a series of TikTok videos 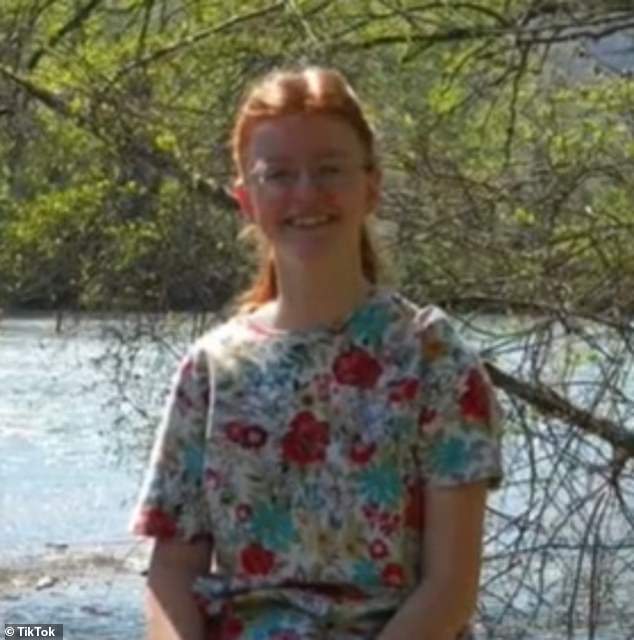 Hunter (pictured as a child) was nine when she was taken in by a family in Texas that belonged to the Institute in Basic Life Principles (IBLP), also known as ATI

She was three when her biological parents gave her up, and she spent years in and out of foster homes until her parents took her in when she was nine.

‘My legal guardians drove me up to a home, unloaded my one backpack full of things, and then drove off,’ she recalled in another video.

‘For the rest of my life, I believed I was adopted by my mom and dad. I told people that. I thought they were my parents. Nine-year-old me thought I was adopted.’

It wasn’t until she was an adult and trying to enroll her sister in public school that she learned she had been rehomed and was never legally adopted, though she still considers her mother and father to be her parents.

Hunter reflected on her strict religious upbringing in an interview with UNILAD, recalling how she was homeschooled and studied the Bible. 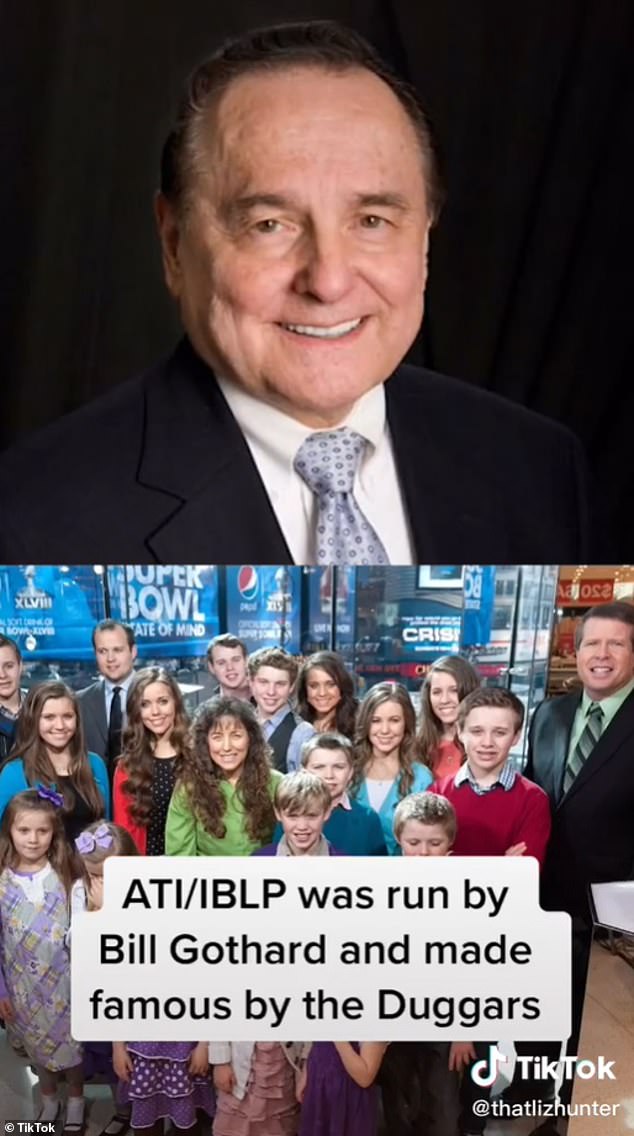 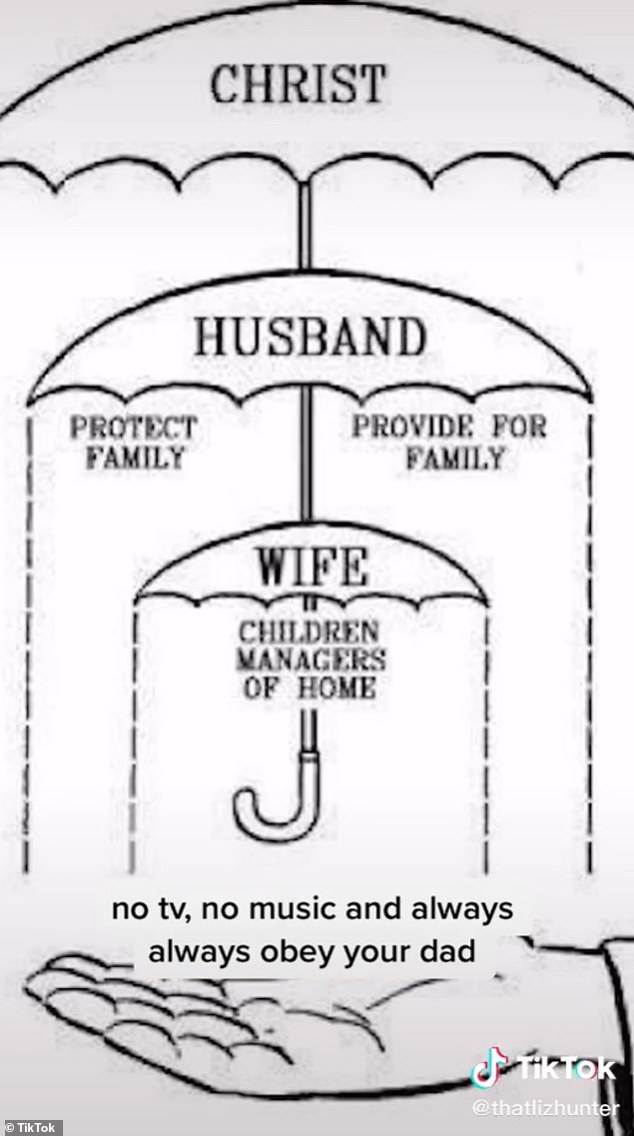 She couldn’t wear clothes with words on them because her mother felt they drew attention to her body. She wasn’t even allowed to wear the color green, simply because her father didn’t like it.

Hunter said that when she got sick, her mom blamed her, claiming the cold was a punishment for disobeying her parents.

Hunter was taught how to bake bread, how to sew, and how to play piano — all skills that she ‘needed to be a good wife.’ By the time she was 17, her parents had her thinking about marriage. 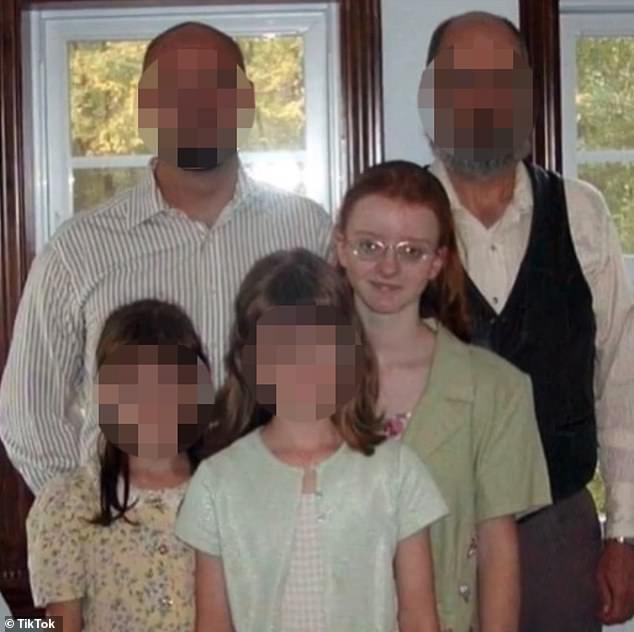 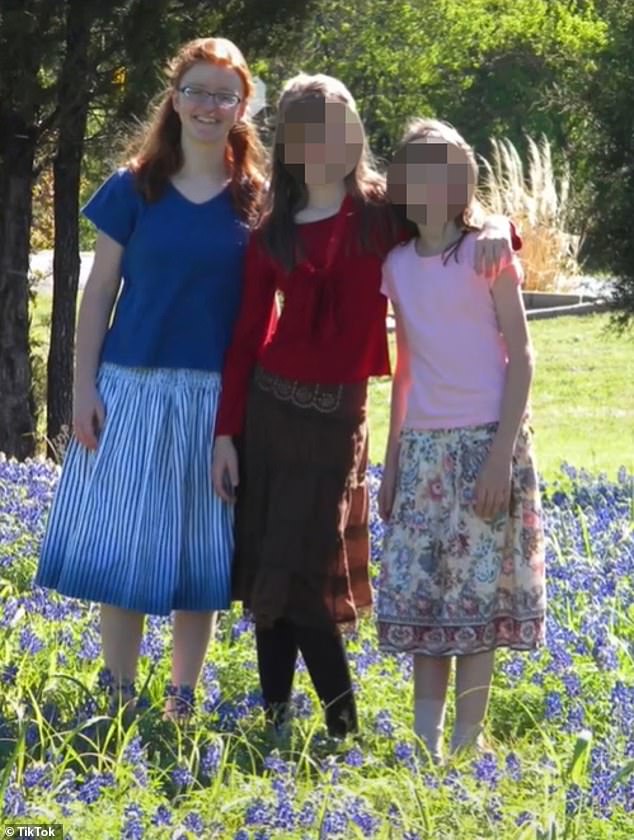 Hunter (pictured as a child) told UNILAD that when she got sick, her mom blamed her, claiming the cold was a punishment for disobeying her parents

‘I wasn’t supposed to date or flirt with any guys because my dad was going to pick my husband,’ she said.

In one of Hunter’s recent TikTok videos, she shared some of the books she got in trouble for reading when she was growing up in IBLP.

Her parents took issue with George Orwell’s 1984 because ‘the main character has an affair’ and Bridge to Terabithia by Katherine Paterson because ‘the word hell is used.’

The Diary of Anne Frank was deemed ‘too explicit’ because ‘she wrote about her crush and sex,’ and she also faced backlash for reading the American Girl Meet Felicity book collection because ‘Felicity is too independent and lies to her parents.’

Many viewers wanted to know how Hunter was able to go to college as a female, which is typically not allowed in IBLP. 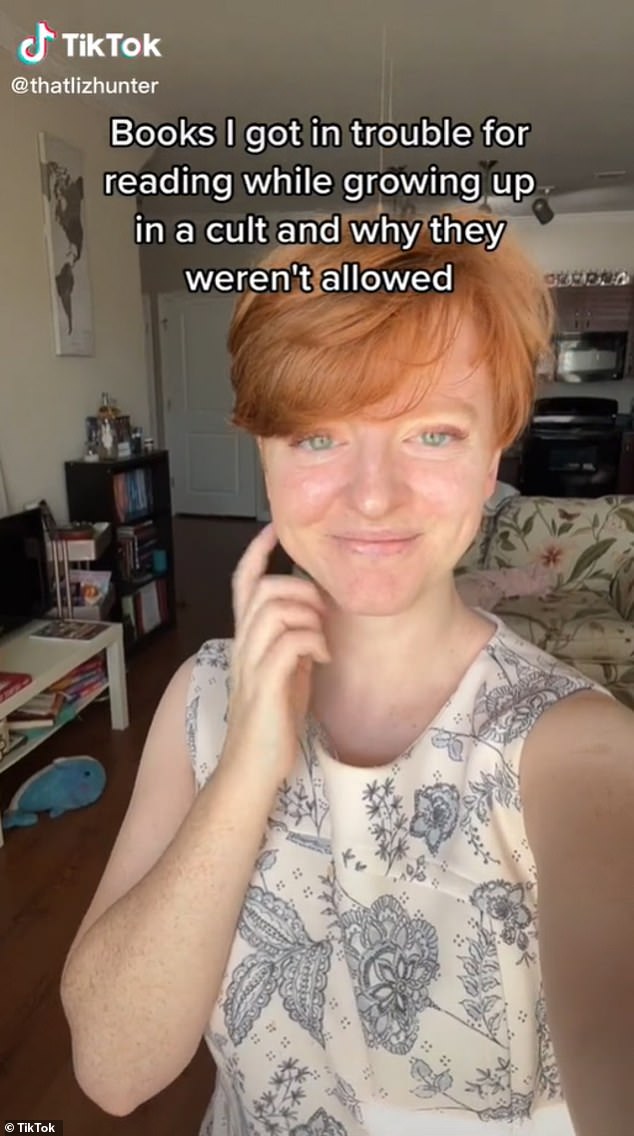 In another video, Hunter listed some of the book she got in trouble for reading when she was growing up in IBLP 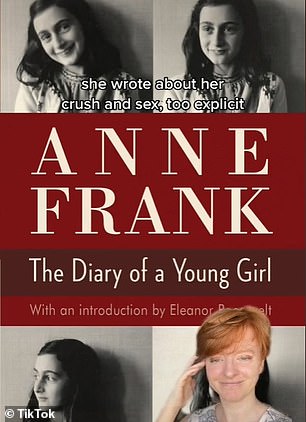 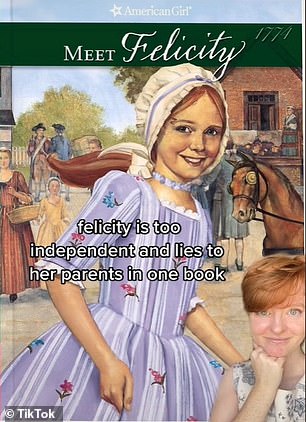 The Diary of Anne Frank was deemed ‘too explicit’ because ‘she wrote about her crush and sex,’ and she also faced backlash for reading the American Girl Meet Felicity book collection 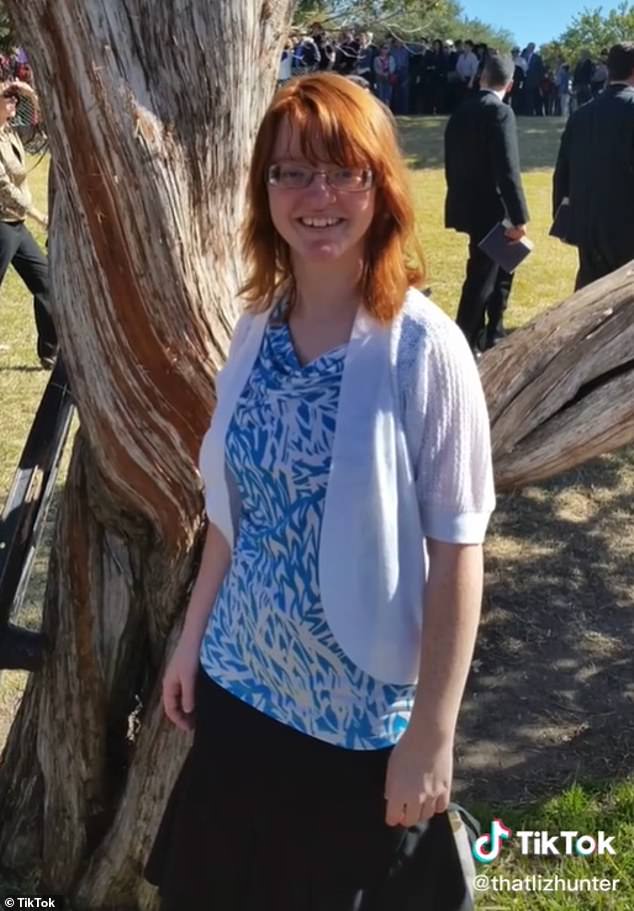 Hunter was 22 when she enrolled in one of the most conservative colleges in the U.S. and got her driver’s license

She explained that she was homeschooling her two sisters for her parents when she convinced them to let her go to school for teaching.

‘I was like, “Well, if I’m doing all of this, I might as well become a teacher and have an education degree,”‘ she recalled.

‘And my parents were like, “Well, we would rather you get married, but if you insist on finishing your education, you can go to school to be a teacher and stay at home and teach your kids when you get married.”

‘And that’s how I wormed my way to college.’

Hunter was 22 when she enrolled in one of the most conservative colleges in the U.S. and got her driver’s license.

‘I did not know I was in a cult until I was a sophomore in college, and I was talking to my therapist,’ she said in another clip. ‘I was explaining that my parents used the Duggar “buddy system” to discipline me and my sister.’ 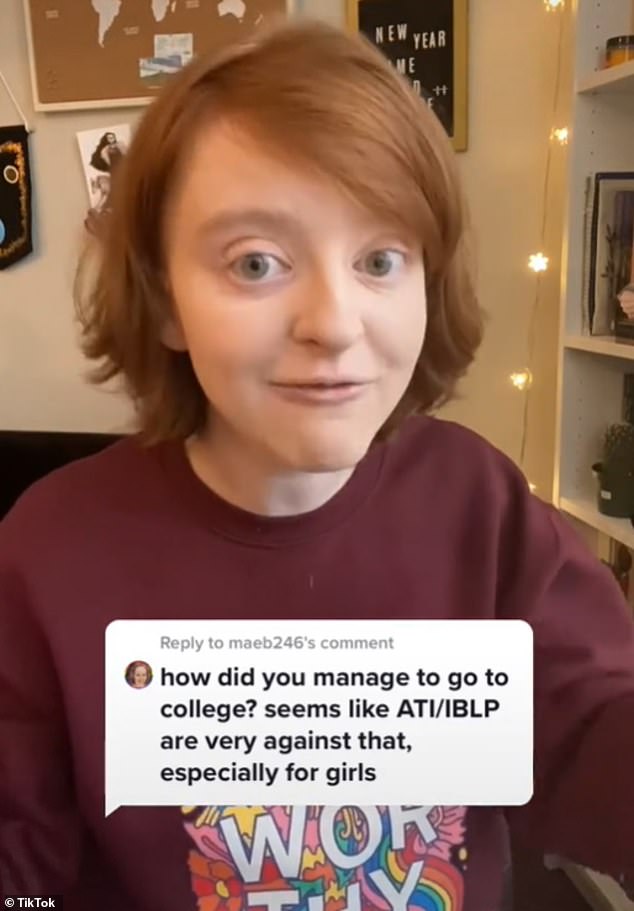 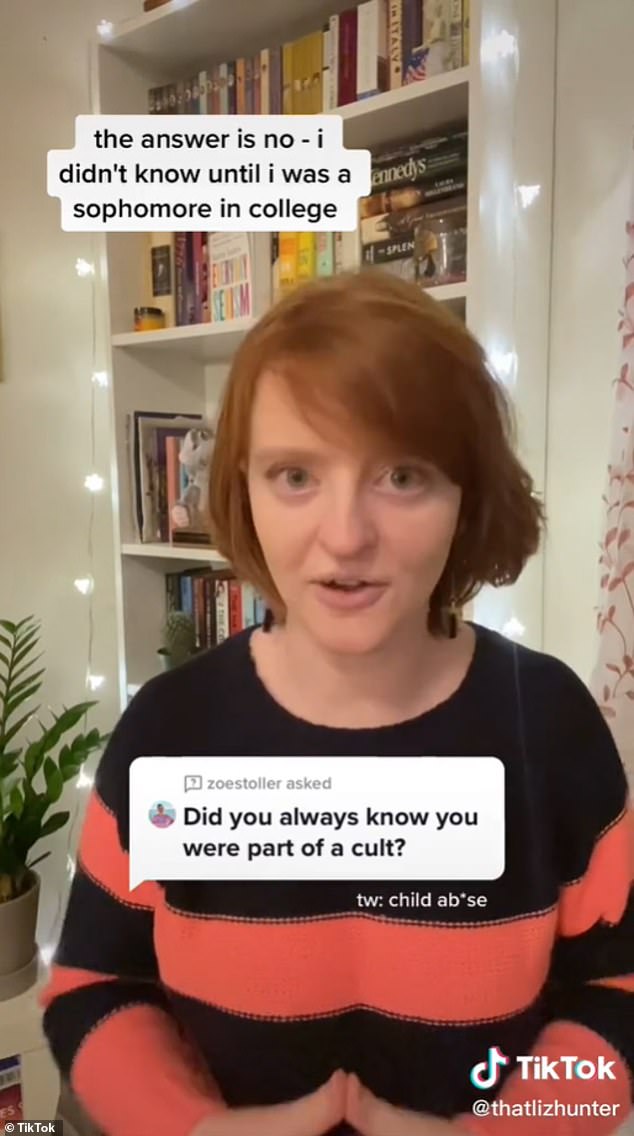 Conservative Christian parents Jim Bob and Michelle Duggar, who have attended and promoted IBLP events, implemented a ‘buddy system’ with their 19 children in which each older child was paired with a younger child to take care of.

‘When I told that story to my therapist, she looked at me and she said, “Elizabeth, not only is that child abuse, but your parents are a part of a cult.” And it just dawned on me, and I was like, “Oh, yeah, you’re right.”‘

A year later, she realized she was a lesbian after listening to a podcast with Christian people who were gay, something she didn’t realize was an option before.

‘Growing up in a cult, it’s difficult to know what your sexuality is when the only thing that you’re given is an option is to marry a man and have lots of kids,’ she explained. 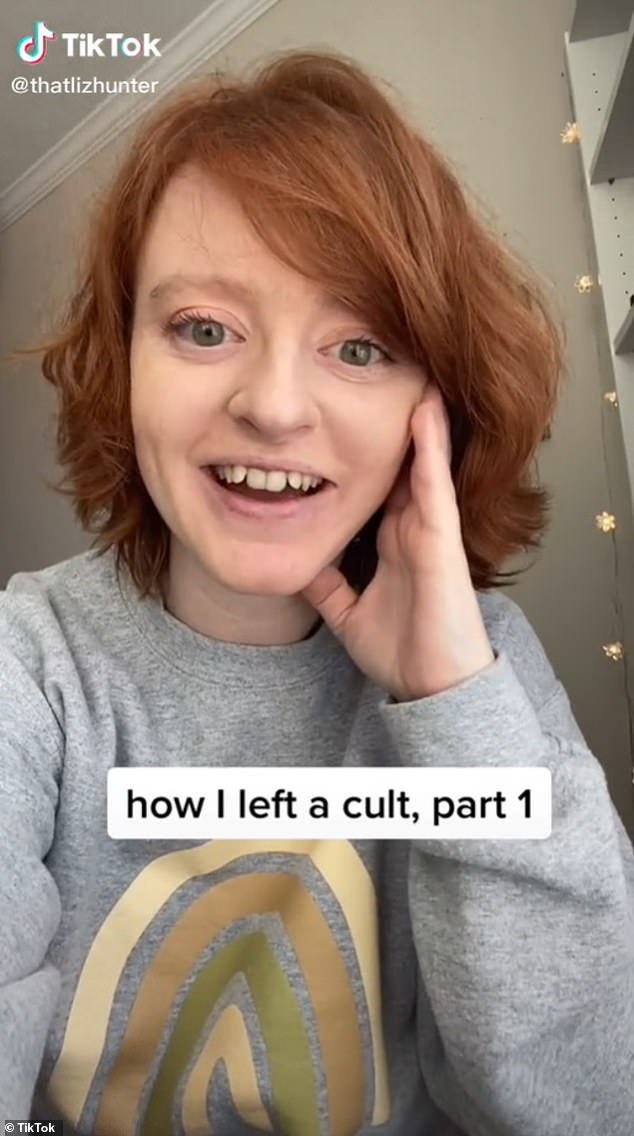 She later came out as a lesbian and broke away from the religious organization Hunter is slated to publish her first fantasy novel, Hearts of Clay and Tempest, next month 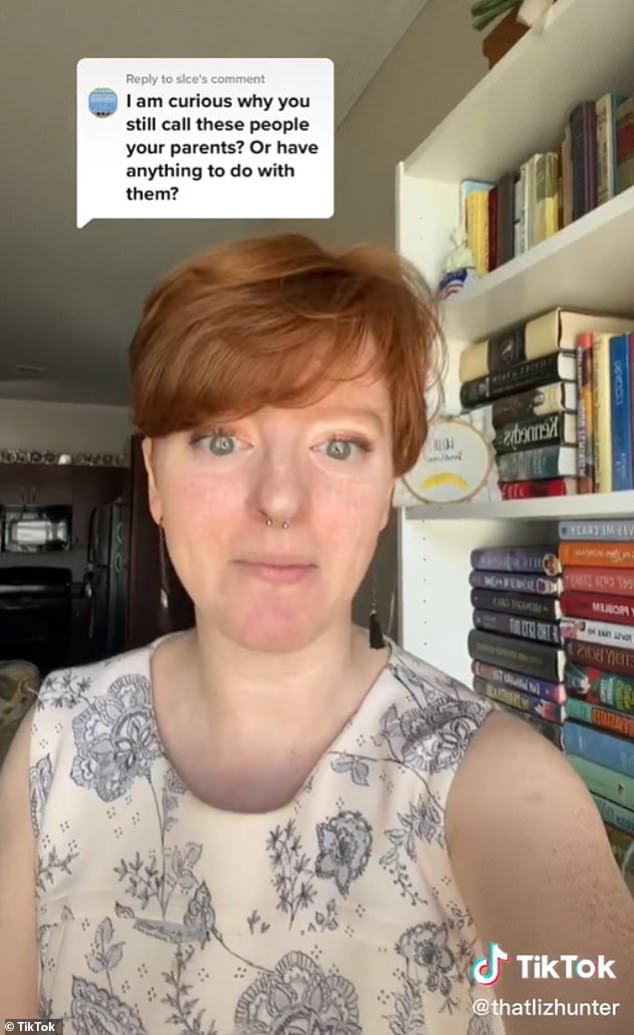 Hunter has since broken away from IBLP and is now working as a writer and digital creator. Her first novel, Hearts of Clay and Tempest, a retelling of the Little Mermaid, is slated to be published on June 14.

However, she hasn’t completely cut off contact with the parents who raised her because they are the only parents she has.

She detailed the trauma she felt after being abandoned by her biological parents, saying she spent two years hoping they would come back for her.

‘I basically cut off all mental ties to them when I was five years old,’ she said. ‘When I was rehomed at age nine and thought I was adopted, within two weeks my parents told me that I had asked to call them mom and dad.

‘I remember being so happy that somebody wanted to be my mom and dad because, from the ages of three to nine, everyone told me very plainly, “I’m not your mom. I’m not your dad.” And these were the first people who were like, “Yeah, you can call us mom and dad.”

‘So, it’s hard to let go of that, even though I thought they were abusive and wrong in many ways,’ she explained. ‘I know that they still loved us even though they did not do right by us completely.

‘And they’re the only parents I have.’