Blonde ambition! Woman claims her ex-boyfriend’s new lover is copying her by dying her hair, stealing her looks – and even her hobbies

They say imitation is the best form of flattery but one woman who fears her ex-boyfriend’s new lover is copying her looks and traits isn’t impressed.

She shared 15 years and three daughters with her ex and lived an active life filled with horse riding and surfing before they parted ways.

He dated another woman for three years before splitting and moving on to the mother of one of his daughter’s friends.

This is when things began to get creepy according to the woman who shared her story with Nine Honey.

A woman who split up with her boyfriend after 15 years and three daughters together said his new girlfriend, who had black hair, is trying to look like her (stock image)

But when she bumped into her three months later she received the shock of her life.

‘I’d last seen her when we were chatting in the school playground, so imagine my shock when I saw her with long blonde hair,’ she wrote.

‘Not only had she dyed her hair, but she also had hair extensions.

‘I can only imagine that, as she knows he likes women with long blonde hair, (his ex-girlfriend also had long blonde hair) that she was trying to fit in with what she perceived as being his “ideal woman”.

The new flame did not stop there and began to adopt similar hobbies and the same fashion sense as the woman.

‘I am a keen horse rider, which was something my ex and I enjoyed together. I’ve heard from my daughters that she has enrolled herself in horse riding lessons,’ she explained. 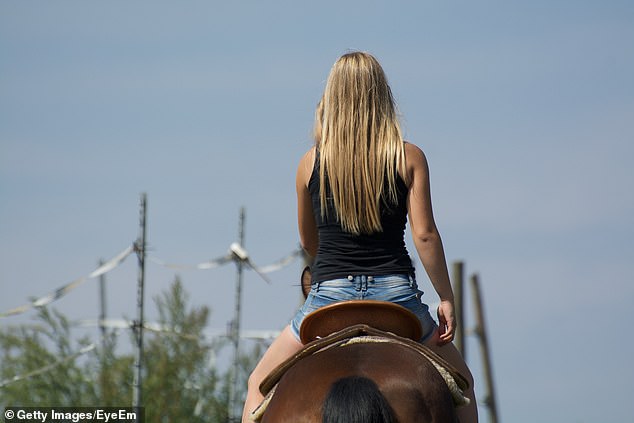 The new girlfriend ditched her cropped black hair for dyed blonde locks and hair extensions and took up horse riding, which the woman used to do with her ex-boyfriend (stock image)

The new love interest has also taken up surfing, swing dancing and bush walking, hobbies the woman and her children use to do as a family.

‘There’s nothing wrong with that at all, she’s clearly just trying to fit in with his way of life and wants to be able to participate in the things he loves to do,’ she said.

But what freaks the woman out the most is the change in physical appearances.

She loves to wear retro sundresses but now the new woman, who is more of a jeans and t-shirt person, is following suit.

But she maintain that she holds no animosity towards the new woman.

‘Hopefully, he is good to her and, although it’s still early days, loves her no matter how she looks,’ she said.