A Missouri woman who went out with a ‘sweet,’ ‘normal’ widower with a young son was shocked to discover that the man’s supposedly dead wife was very much alive.

Sissy Hankshaw said that when she met a 25-year-old teacher on Tinder, she thought he seemed ‘great,’ and was sad to hear that the mother of his son had died in a ‘tragic accident.’

But after doing a bit of internet research, Sissy discovered that the woman was not dead at all, and in fact was still dating the man from Tinder — and when Sissy confronted him about it, he had a mind-boggling reaction. 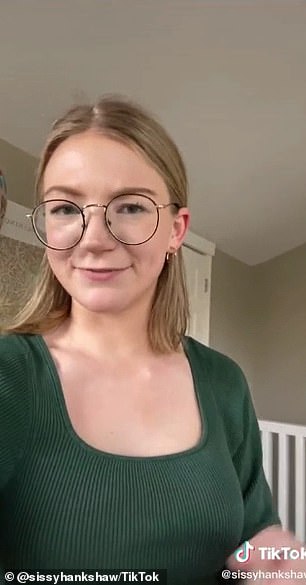 Story time! Sissy Hankshaw (right) shared her worst Tinder experience in response to a prompt on TikTok, recalling the ‘great,’ ‘normal’ 25-year-old teacher she met on the dating app

Sissy, who is currently in a relationship with a different man, shared the story of her bad Tinder experience on TikTok in April.

‘I went on a Tinder date with this guy who was a teacher. He was 25, he taught school kids and I’m like, “Oh that’s so sweet,”‘ she said.

‘He had a son. He said that his son’s mother had passed away, tragically, she was dead, he was a single dad. How horrible.

‘The other teachers would watch his kid when he would go on dates I was like, “Oh that’s so sweet. How nice of them.” He liked running, he seemed like a normal person,’ she went on.

‘And I, of course, had an Instagram stalk to see how this tragic story unfolded because I love things like that. I love pain and sadness,’ she said facetiously.

‘So I went to stalk her on Instagram and I went back to show my friend and looked back on a different day and when I did she had new posts and so I stalked even further and found, obviously, her whole family and career history on the internet,’ Sissy continued. 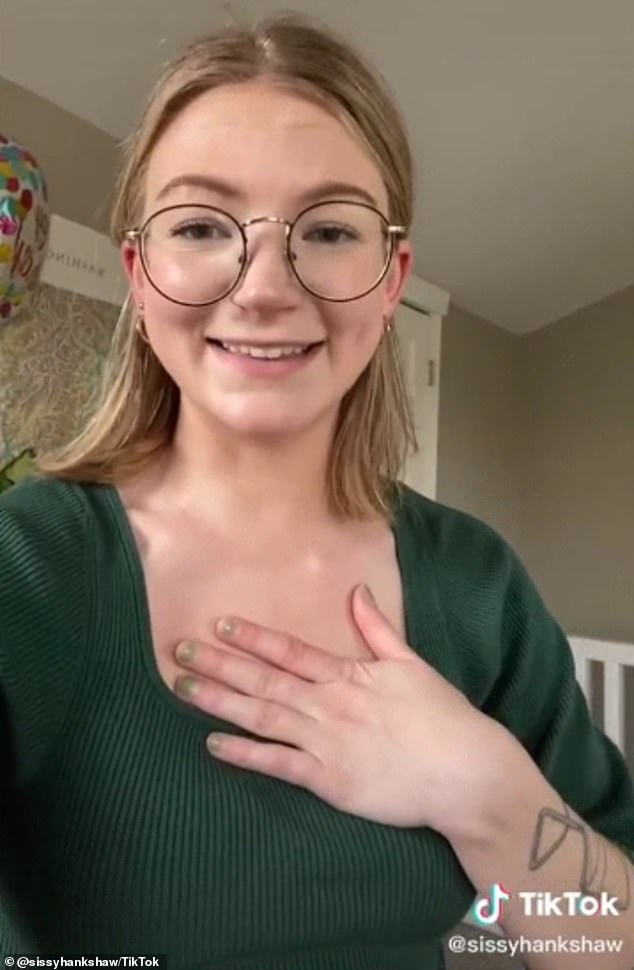 Uh-oh! She expressed sympathy over the tragic accident that took his wife’s life, but after some online research Sissy found that his wife was still alive and they were still in a relationship 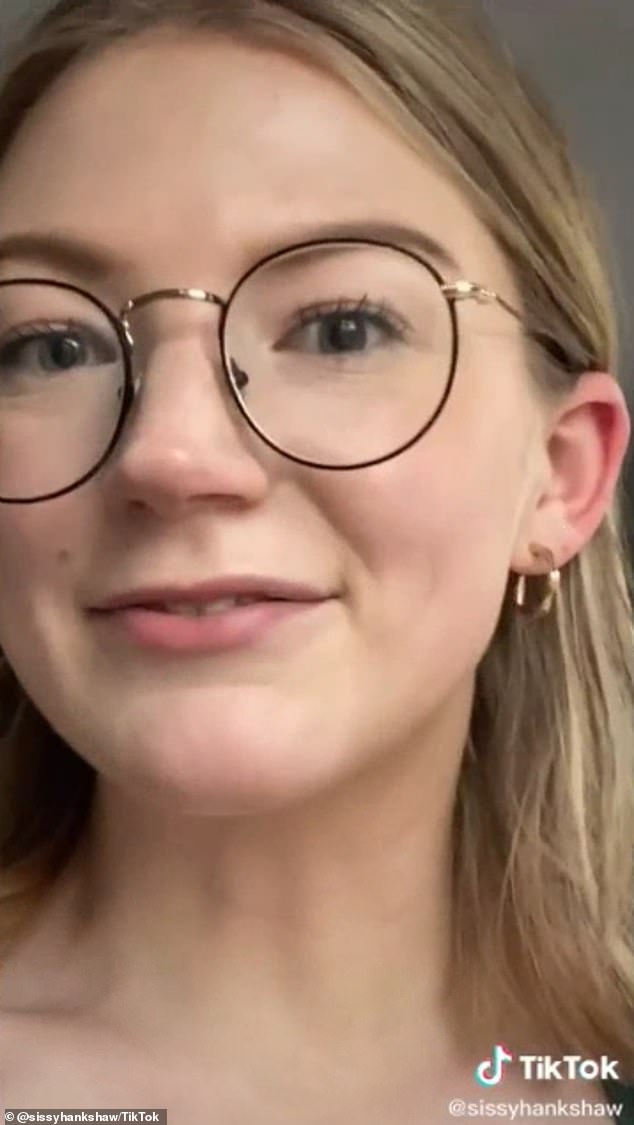 Gaslighting: When she confronted him about it, he insisted his wife was dead and even accused Sissy of lying about what she found

‘And it turns out she was not dead at all. She was very much alive, and they were very much together in a relationship.’

She marveled: ‘And he was so normal, he was the most normal person I’ve been on a date with in a long time.’

Shocked, Sissy confronted the man about his egregious lie.

Commenters were shocked that the man thought he’d get away with his lie, especially in the internet age.

Sissy added that she even sent the other woman a message on Instagram, but that it was never read. 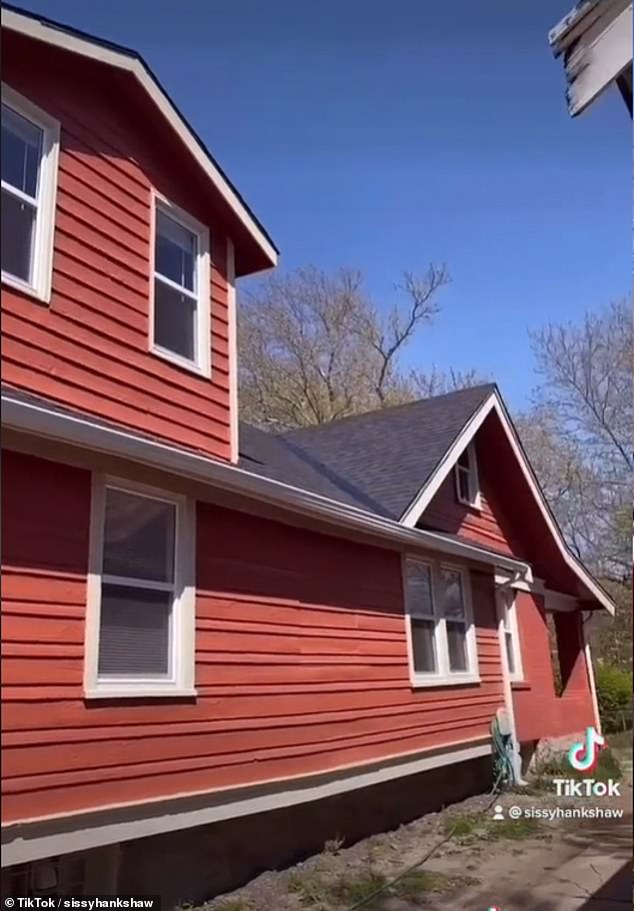 New house! Sissy recently went viral for another video about her new house 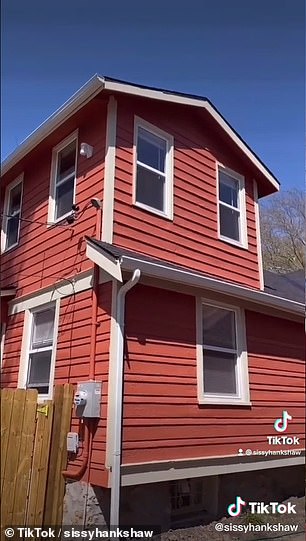 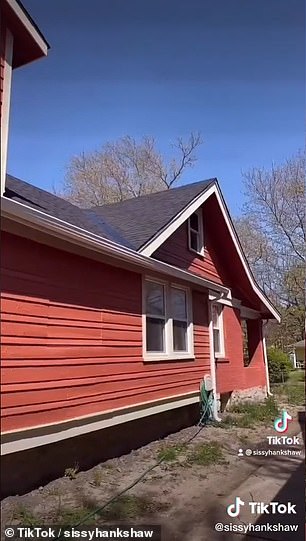 She and her boyfriend recently moved from Pennsylvania to Missouri, where they purchased their first home based only on photos they’d seen online 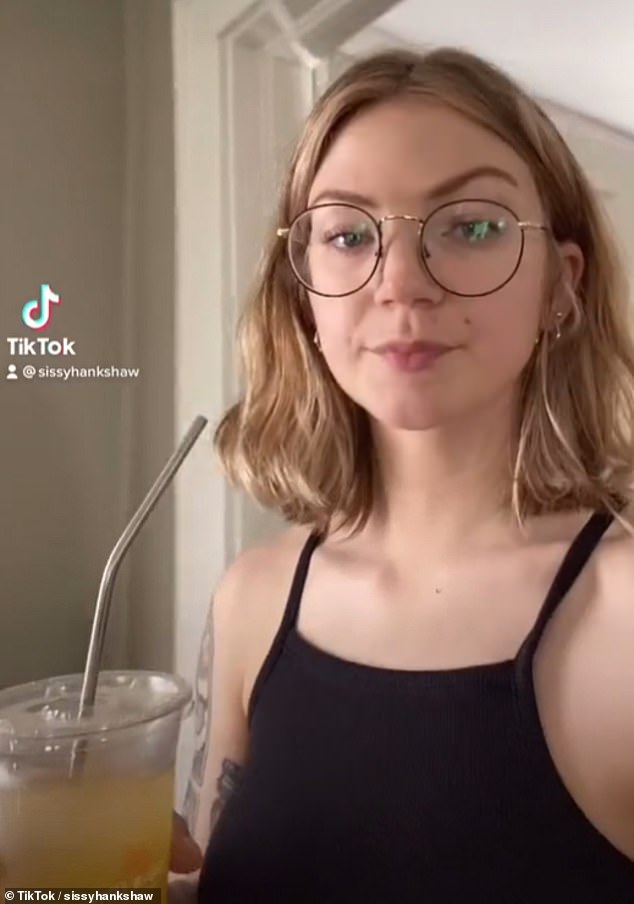 ‘When you buy a house without ever seeing it in person before, check for secret rooms I guess,’ Sissy captioned her video

Sissy previously went viral for taking TikTokers for a tour of her new house — which held a mystery inside.

She and her boyfriend recently moved from Pennsylvania to Missouri, where they purchased their first home based only on photos they’d seen online.

So Sissy was surprised when she finally got to see the place in person, and discovered that a windowed room on the second floor that’s visible from outside the house had no access points inside.

‘When you buy a house without ever seeing it in person before, check for secret rooms I guess,’ Sissy captioned her video on the discovery, which has gone viral on TikTok.

‘So because of the pandemic, we bought this house on the internet without ever seeing it before, and when we finally saw it in person after two months of looking at it online, we realized that it had something really weird about it that we had not noticed from the 18 pictures we had stared at for, like, the past couple of months,’ she explained.

‘So part of the house is like a house shape, and then the back has this little tugboat-y sticky-up situation,’ she narrates as the camera pans over her house,’ she went on.

The house is red, and the ‘tugboat sticky-up situation’ she refers to is a second floor that rises just above the back of the house, big enough to close one room. 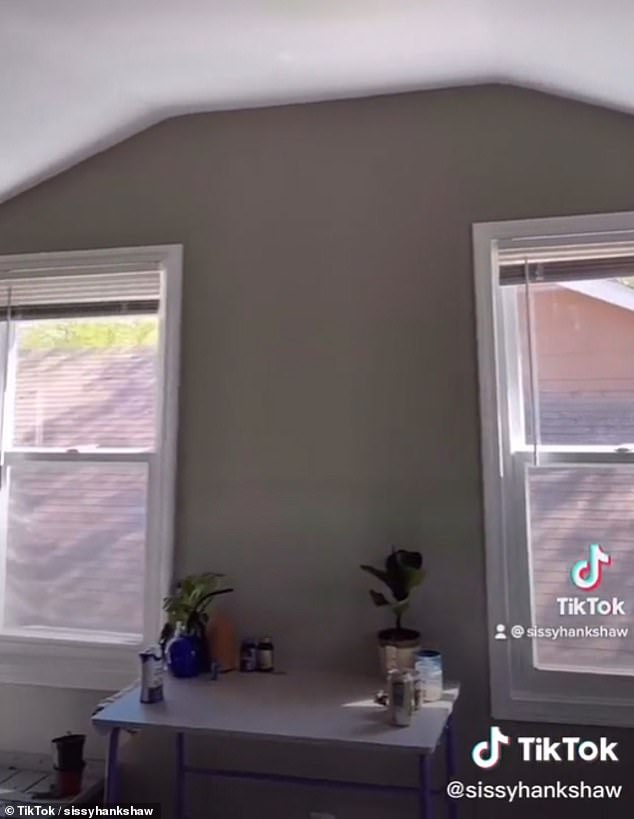 No doors! Sissy showed off her office, pointing out that it didn’t offer access to the attic at the front of the house 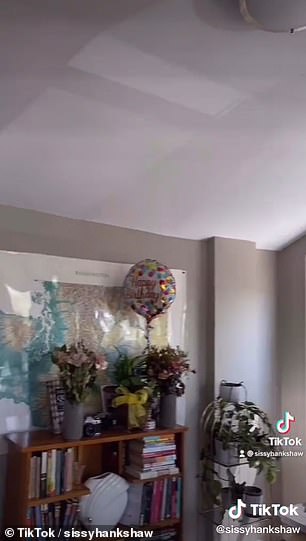 ‘We realized that it had something really weird about it that we had not noticed from the 18 pictures we had stated at for, like, the past couple of months,’ she explained 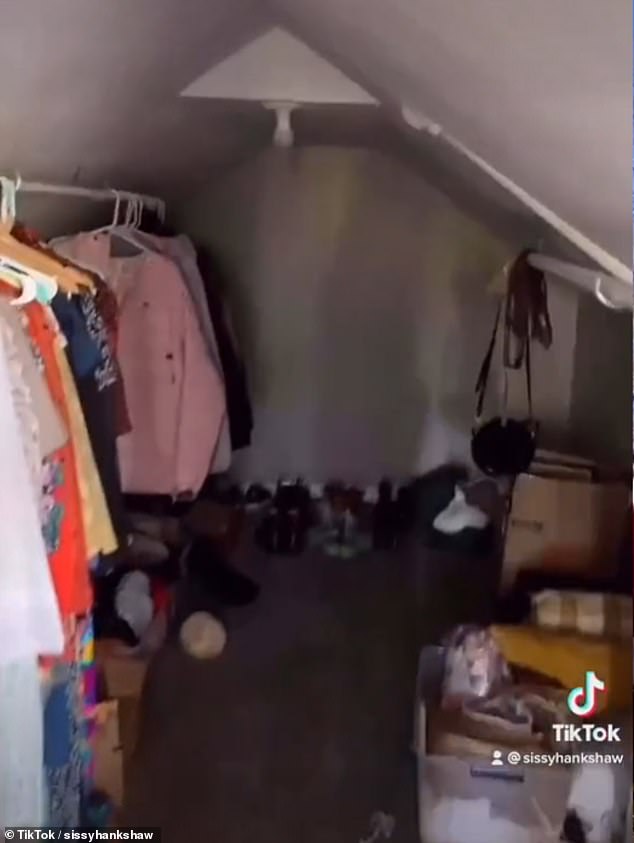 But wait! Soon, they discovered something worth investigating in the closet 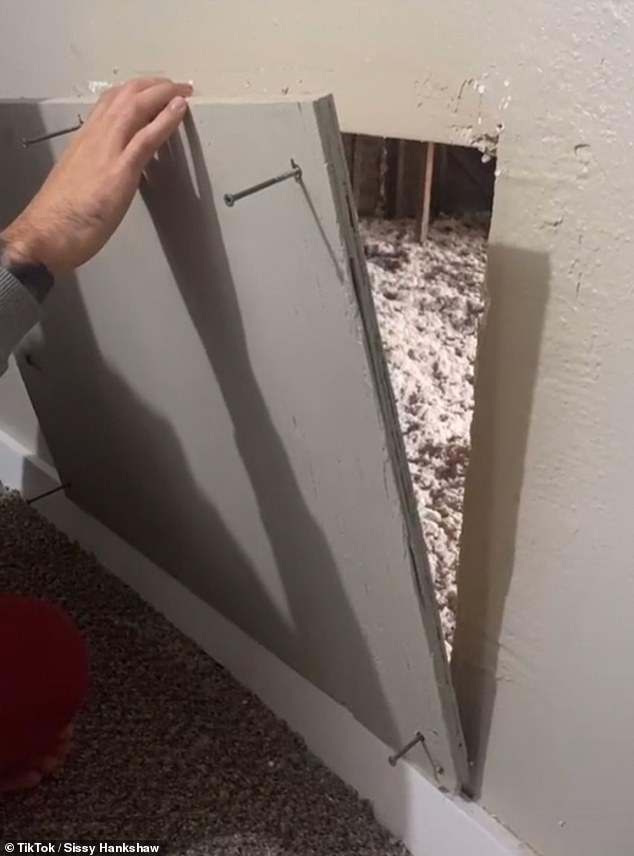 Got it! They found a boarded-up area in the wall near the floor, which they used tools to remove

That’s where Sissy has set up her office, and she shows off the inside of the room.

But on the other side of the house is another area that sticks up higher than the first floor, with a triangular roof and even a window.

The mystery, however, is that that second area isn’t accessible from any other point in the house — not her office, and not the floor below.

Her video, which was uploaded in April, has gone viral and earned 1.2 million likes — and plenty of replies begging for more information.

So Sissy and her boyfriend investigated, and eventually found a way to access the hidden attic — through a board that had been nailed into the bottom of one wall in their closet 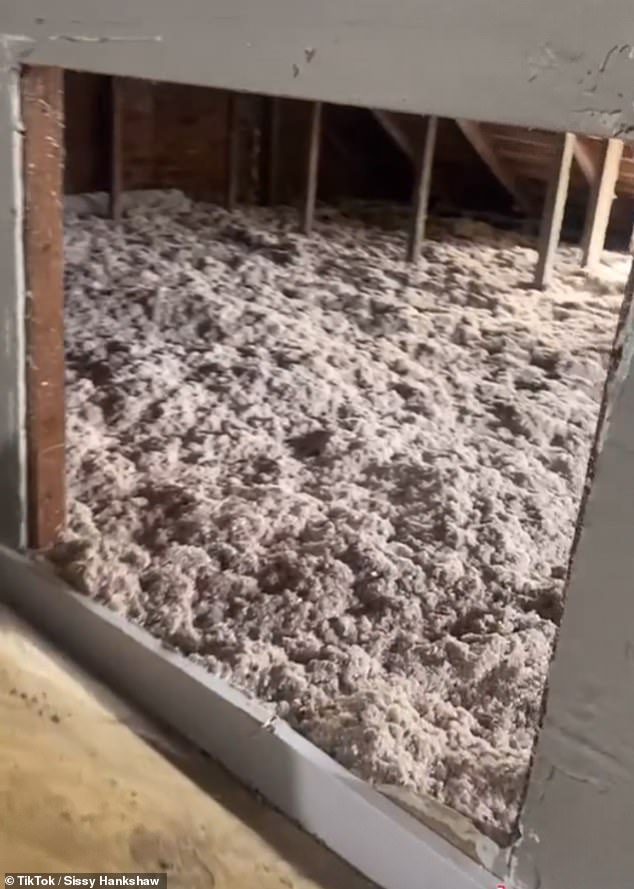 Open! There, they found not so much a usable room as a small attic with very low ceilings 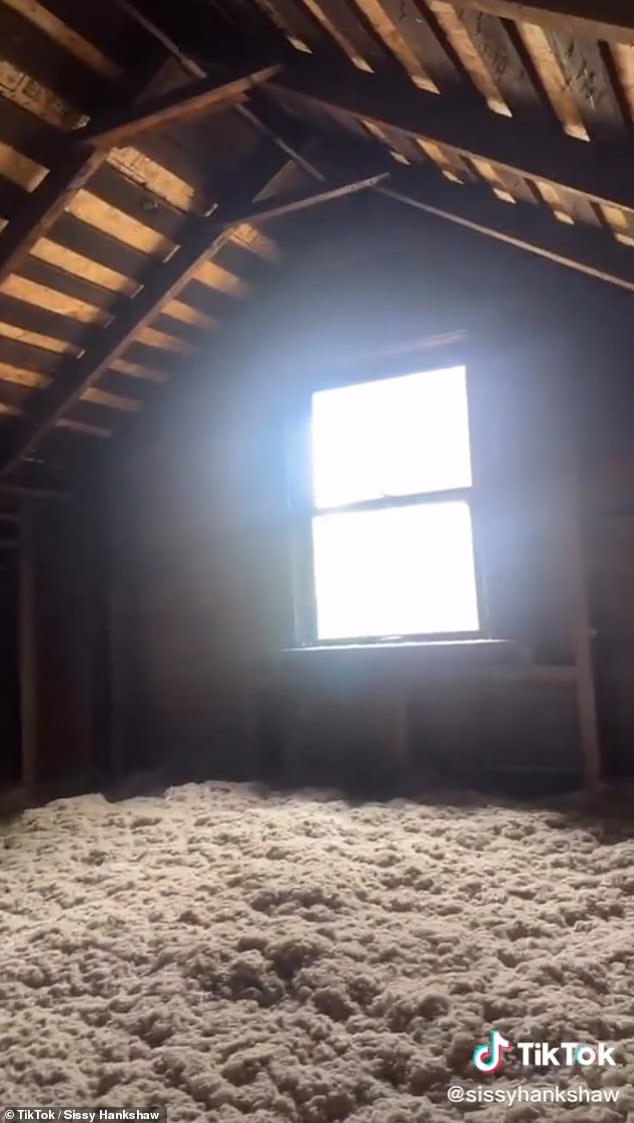 Why? What Sissy found odd, though, was that a previous owner had put latching windows in the unusable attic 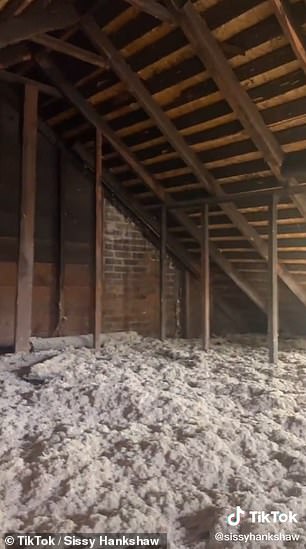 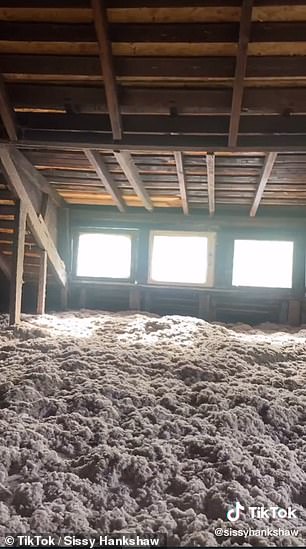 Interesting: It also had finished the floors, which are now covered in insulation 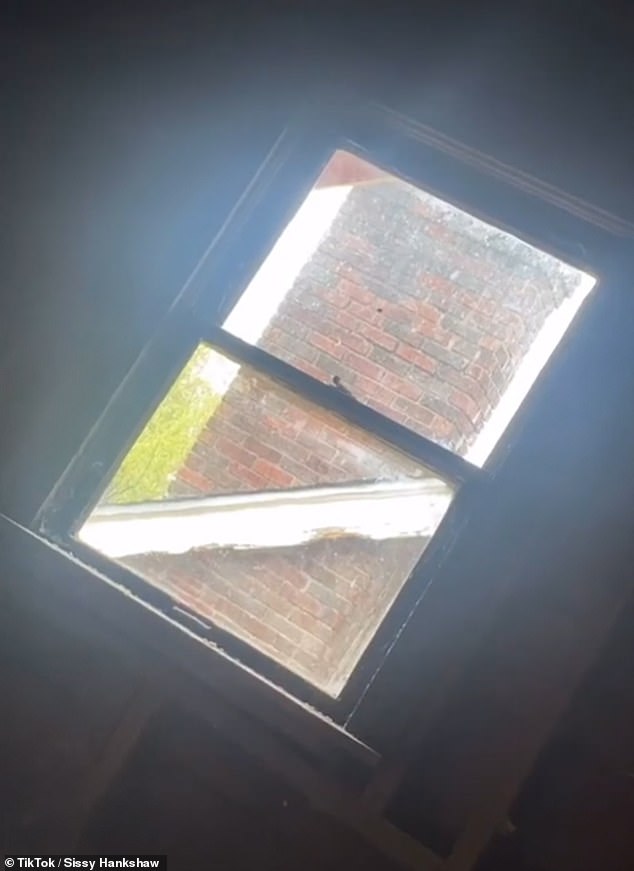 Score! The home was also a bargain, with the pair paying just $12,365.63 for their down payment with an $800 per month mortgage

Using tools, they unscrew the board from the wall to reveal what was on the other side.

There, they found not so much a usable room as a small attic with very low ceilings.

What Sissy found odd, though, was that a previous owner had put latching windows in the unusable attic, and had also finished the floors, which are now covered in insulation.

Later, Sissy answered more viewer questions, explaining that she works in real estate and felt comfortable buying the home without seeing it — but also noted that it was necessary given that they were moving from another city in the pandemic.