A former-bodybuilder has shared a bloated photograph to shatter the ‘Instagram illusion’ of perfection by revealing the real impacts PMS causes on her body.

Victoria D’Ariano, 25, from Venice in Los Angeles, posted the images online to encourage others online to be honest about their body struggles too.

She compared the two images that were taken four-hours apart – the first showing her flexed, chiselled abs and the latter with her stomach swollen from PMS.

The social media influencer went on to write about her ‘extreme bloating’, lack of energy, mood swings, cramps and more, in a bid to get others to be more open.

She believes Instagram stars often hide the realities of being a woman and says her followers resonated with the honesty of her post, which attracted over 9,500 likes.

Victoria, originally from London in Ontario, Canada, said: ‘No one talks about the struggle women go through every month, with myself I go through being bloated, depressed, exhausted and moody.

Victoria D’Ariano, 25, from Venice in Los Angeles has shared a photo to show the effects of PMS to shatter the myth of Instagram ‘perfection’ 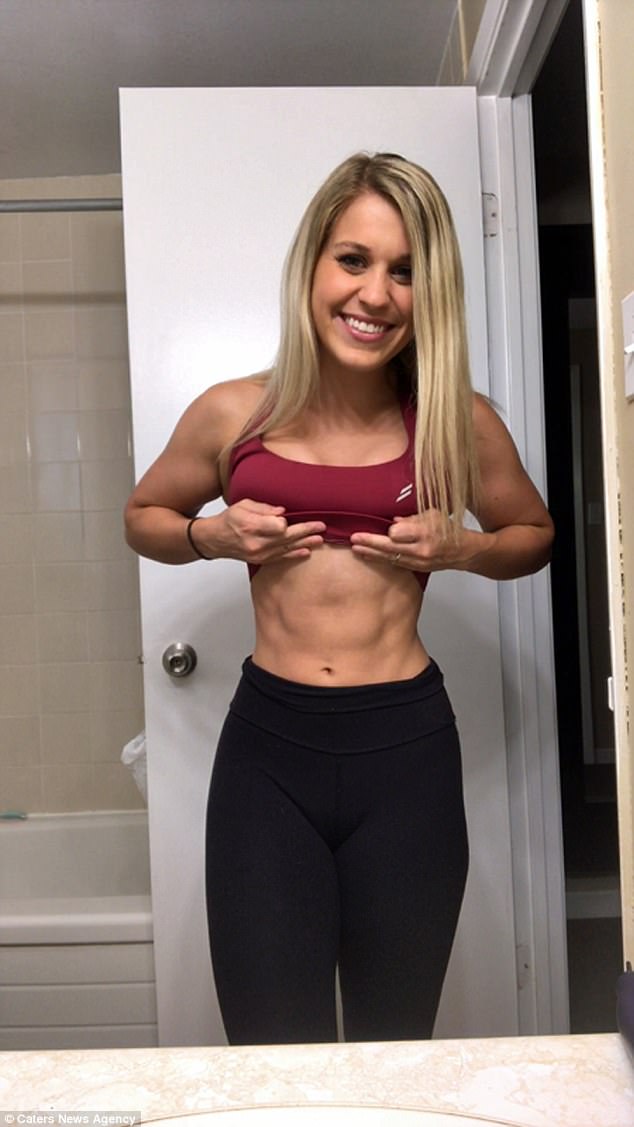 Four hours before, Victoria had flat chiselled abs before her stomach blew up due to PMS

‘I wanted people to see reality that I don’t walk around with a super flat stomach all the time.

‘I wanted to be real with my followers and talk about my struggles to shed light on something that people don’t really talk about.

‘I was kind of inspired, my stomach was so uncomfortable and I was feeling all these emotions, so I decided it was good for others to know they are not alone and the symptoms are normal.

‘The first picture I took, was me doing a typical flex selfie, then the second, which was three or four hours later showed my stomach swollen.

‘There are periods of the month where I am bloated and it’s unrealistic to think you can always look like the flex picture rather than the bloated one.

‘I want people to realise, one moment on Instagram doesn’t always depict what actually is going on in a person’s life and that what we go through is totally normal.

‘The response from my post was so positive, a lot of women felt empowered by me showing you can be natural and embrace all parts of a being a woman. 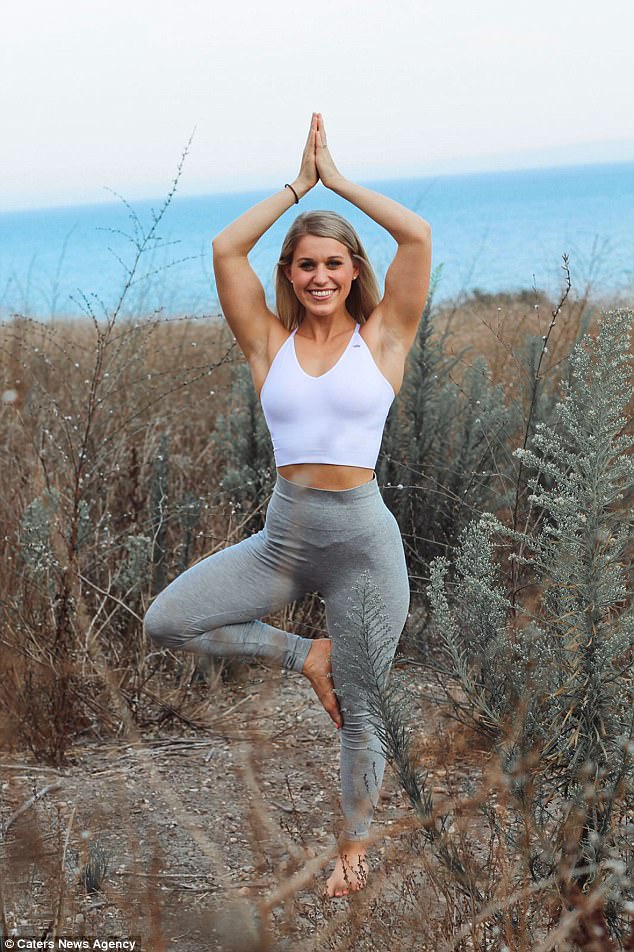 Victoria gained 20 lbs (1.4 stone) since abandoning bodybuilding and is the happiest and healthiest shes ever been 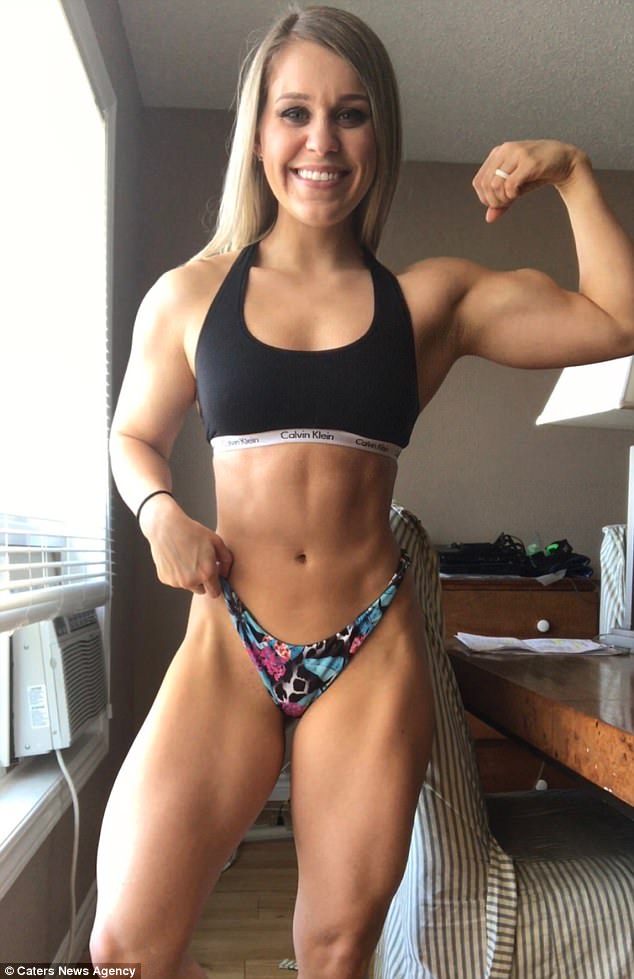 ‘It reminded me that we can be too hard on ourselves for not looking our normal selves during PMS, but it’s something very normal and is just a part of the human body.’

Victoria, who has over 340,000 followers on Instagram, hopes her candidness will encourage others to talk more truthfully about their own experiences.

She said: ‘A lot of females on social media go through symptoms of PMS like bloating and being uncomfortable, but never talk about it.

‘I think people need to be more honest because there are many young women who are influenced by them yet their Instagram image of perfection isn’t always a reality. 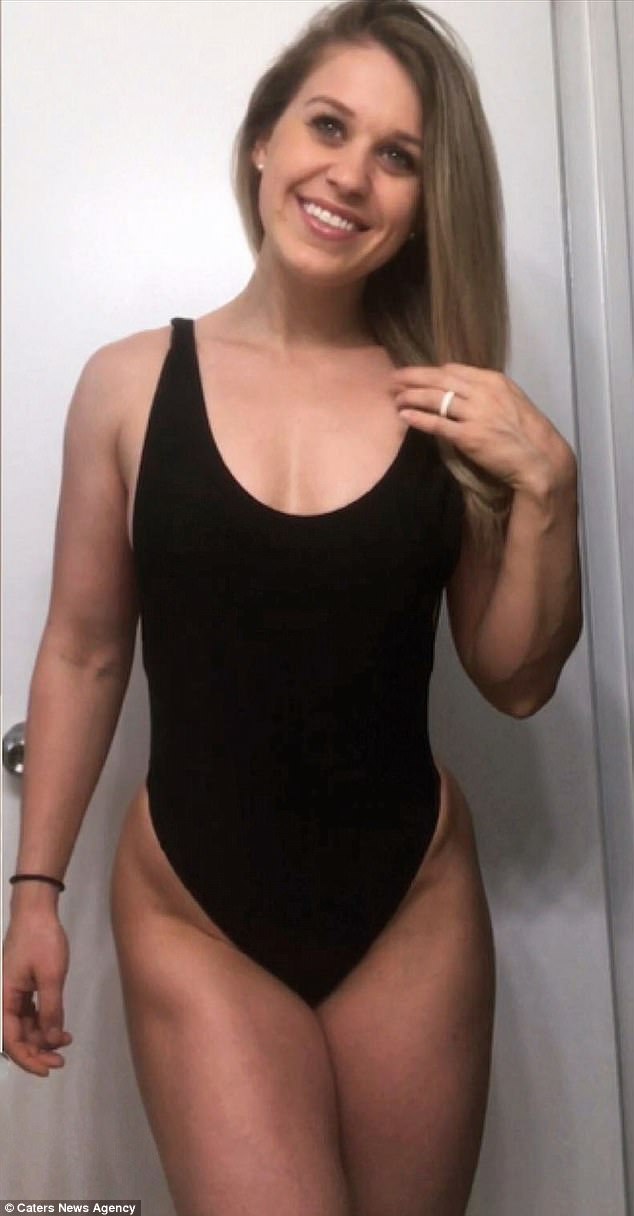 ‘Things can be perfectly posed, edited, have great lighting and more, others should come forward and share their real struggles too.’

Her self-love message comes eight months after abandoning rigorous training and dieting she undertook for four-years to achieve the ‘perfect body’.

Victoria said: ‘I used to be a bodybuilder, but I started having image issues and mental health problems based on the addictive nature of the lifestyle. 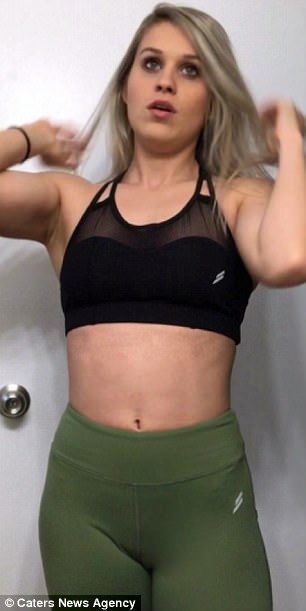 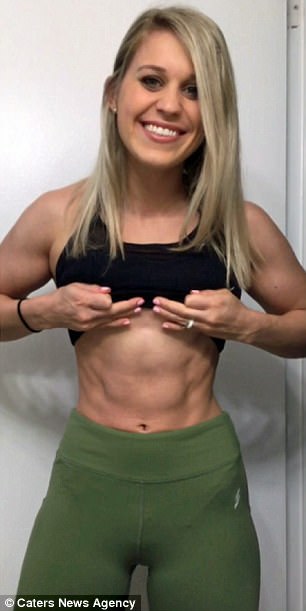 In one picture, Victoria’s pose means her abs aren’t clearly visible and her stomach looks bigger (left) In the next her midriff looks impossibly toned (right)

‘For me, I was fitness obsessed for four years and over time lost the sense I why I got into it.

‘I was no longer happy, was having body image issues, body dysmorphia, eating pattern problems and a lot of anxiety.

‘I decided I was ready to solely focus on myself and my mental well-being instead of just the physical side of who I am.’

Victoria says since putting on one and half stone (20lb), she’s happier than ever and feels much more comfortable in a curvier fit body.

She added: ‘I wasn’t happy looking muscular and shredded, it wasn’t comfortable for me and even with the added weight I feel so great about myself.

‘Since January I’ve lost quite a bit of muscle, but I feel so much happier and more confident than I ever did before.

While she was bodybuilding, Victoria was not happy and was having body image issues, body dysmorphia, eating pattern problems and a lot of anxiety

‘I live a life now where I’m not focused on the way I look and training, I work out because I like to do it for enjoyment rather than a particular look.’

Victoria is managed by Minnesota Records, who chose her based open her candid nature on the social media site. 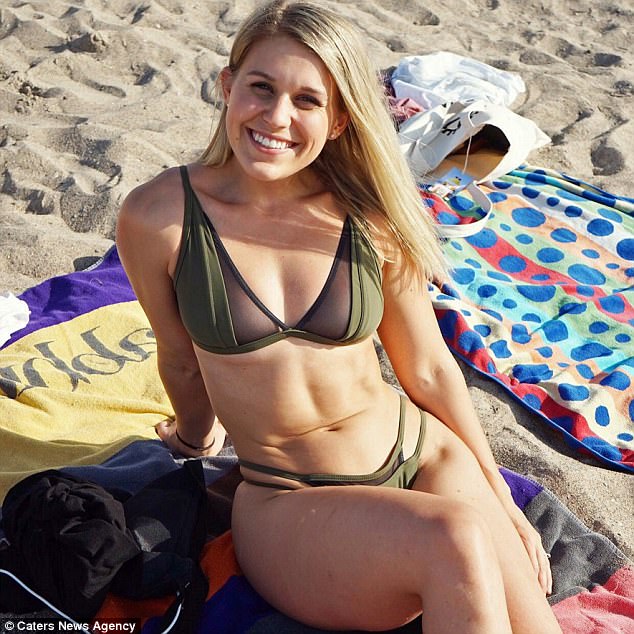 Victoria now works out because she enjoys it, not because she’s obsessed with looking a certain way

‘I absolutely think her fans appreciate what she does, she is a magnet that draws people in.

‘The artists we look for are good people, each of our clients we look for discuss problems faced by others such as mental health and encourage other girls by sharing their story.

‘A lot of people don’t feel confident doing it, it takes a lot of courage and that’s what a leader is, Victoria is a real leader.

‘She’s not afraid to talk about imperfections and I think that’s what makes her a perfect person.

‘Some influencers feel like they have to be perfect and only want to show the good things in life, they can’t talk about pain or natural stuff that happens to them.

‘There are two sides to Instagram, the fantasy and realness, the “Wow I can relate to that”.

‘Victoria does that second part very well which is why she has such a large following.’