‘Is this excessive?’ Woman sparks controversy online for claiming her household of three goes through nine toilet rolls in a WEEK

A woman has been heavily criticised online for claiming she uses a packet of nine toilet rolls a week, despite only living in a household of three adults.

The anonymous woman, who uploaded her query to Mumsnet, wanted to know how much toilet roll a reasonable person uses weekly to know whether her housemates were eating it.

‘Three adults in my house, two male, one female. I buy a pack of nine a week and we are using 90 per cent of it… honestly I think someone is eating it! What do you use? Is this excessive?,’ she wrote.

The anonymous lady, who uploaded her query to Mumsnet, wanted to know how much loo roll a reasonable person uses weekly (stock image)

A number of women replied almost instantly, saying they couldn’t believe that amount only lasted a week.

‘There are two adults in my house. A pack of nine would last a month, honestly,’ one said.

‘We have two adults and two children and we use two to three toilet rolls max a week. We’d probably use a lot less if the kids didn’t use half a bog roll every time they had a poop,’ another said.

How many rolls of toilet paper do you use a week?

While some reasoned that the brand ultimately helps determine how much is necessary – some are thicker than others after all – there is no need to be using hundreds of squares a day.

But others insisted they understood what the woman was going through.

‘This is a strong topic in my house. There’s seven of us and the toilet roll use is ridiculous,’ one mother said.

‘I can walk in the bathroom and there’ll be half a roll then the next time you go it’s gone. I buy a pack of six on a Monday come Friday/Saturday, I’m buying more,’ another said.

A third added: ‘Omg there’s two of us and we use one and a half toilet rolls PER DAY.’ 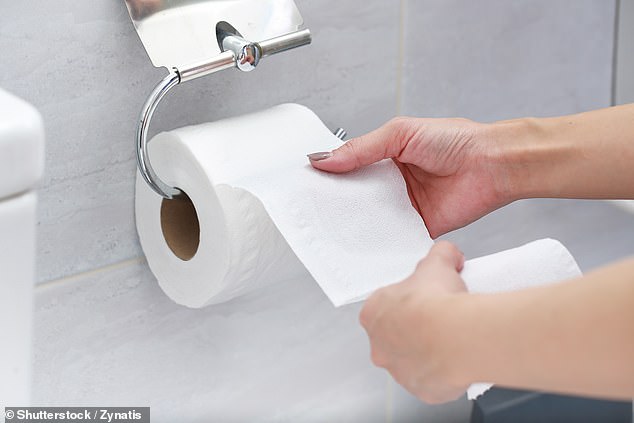 ‘This is a strong topic in my house. There’s seven of us and the toilet roll use is ridiculous,’ one mother said

People commenting started asking how many is ‘normal’?

A user on the site, who spends a large portion of times in hotels, seems to have struck just the right balance in her life.

‘I spend about 150 to 200 nights a year in hotels through work and have this pretty much sussed,’ they wrote.

‘At home, I use Andrex Shea Butter loo roll which requires two sheets per wipe.

‘When I forget to take my own and have to use cheap hotel loo roll, I’m forced to use upwards of 10 squares sometimes just to provide enough substance to prevent it disintegrating.

‘When less is used, I have found issues with paper torn off and stuck in places you’d rather not have it stuck.’