A woman has revealed her handy hack for salvaging her rusty iron – and it involves nothing more than a 29p packet of Paracetamol.

Laura Siârn Outhart, from Malton in North Yorkshire, took to Facebook group Extreme Couponing and Bargains UK to post before and after pictures of the impressive transformation.

She penned: ‘A 29p pack of Paracetamols saved me buying a new iron. I am a nightmare for ironing things I shouldn’t and recently ruined my iron.’

‘I read somewhere that a Paracetamol rubbed onto the iron will make it almost like new again.’

And many homeowners were quick to take to the comments section to praise the innovative homeowner for her top trick.

‘I’ve just seen this post and tried it an it works nice shiny iron again thank you,’ wrote one, while a second enthused: ‘Thanks! This is a great life hack that I’ll be using in the near future.’

Laura Siârn Outhart, from Malton in North Yorkshire, told how she used tweezers and Paracetamol tablets to salvage her damaged iron. Pictured, before 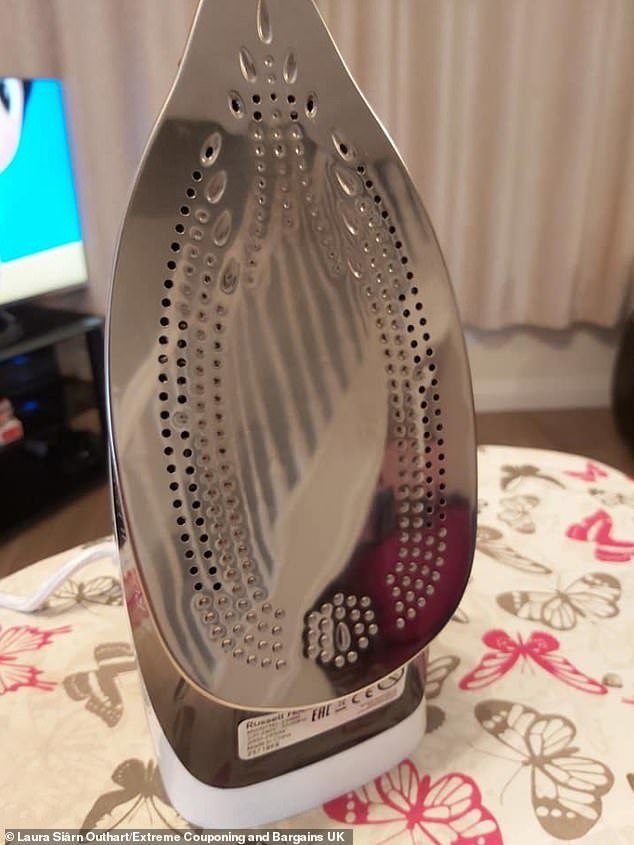 The innovative homeowner explained how she was on the verge of buying a new one, but managed to get it sparkly clean after rubbing the tablets on the appliance. Pictured, after

Laura, who told how the trick prevented her from having to fork out for a new appliance, commented:

‘This took two paracetamols and it worked better when the iron was hot and not just warm.’I was amazed how well it worked and how much money it saved me.’

The innovative homeowner went on to offer an explanation of how she went about the transformation so that others could follow.

‘To anyone asking, I didn’t wet the tablet before hand and if you use tweezers and are very careful then you won’t get burnt,’ she advised.

‘I am not saying do this but it worked for me and saved me buying a new iron. I tried other alternatives but this one worked in seconds and the other ways either didn’t work or it took too long and I would give up.’

The post quickly went viral and gathered nearly 6,000 likes and 1,700 comments from members of the group.

While many thanked Laura for the tip, others told how they would try it out for themselves in the future.

‘I shall remember this as I always end up buying a new one! Thanks,’ enthused one, while a second wrote. ‘I’m so trying this.’

A third added: ‘So glad you posted this I was off out to buy a new one tomorrow but will try this first,’ while another added: ‘Sounds like an amazing trick. Might work on other things as well – thank you for sharing.’

A further commented: ‘This is a great tip! Been doing it for months. It’s amazing.’