Woman was locked inside her body after suffering a stroke

A woman spent five months locked inside her own body after suffering a stroke at just 23.

Klaudia Rachwal, now 25, who lives in Dublin, collapsed while visiting family in Poland, in October 2015, only to wake up to discover she could hear everything around her, but was unable to move anything but her eyes.

Forced to communicate via a board, Ms Rachwal, who suffered from locked-in syndrome (LIS), relied on a breathing machine and feeding tube to keep her alive.

Ms Rachwal, a trainee clinical data manager at Beaumont hospital, said: ‘It was really scary. I was trying to move, but I just couldn’t. My body just wouldn’t do anything.

‘I knew what I wanted to say but my body wouldn’t allow me to make the movement or to make a sound.’

After months of physiotherapy, Ms Rachwal is slowly regaining the ability to talk, swallow and stand with a frame.

She is speaking out to raise awareness of young people who suffer strokes and LIS. 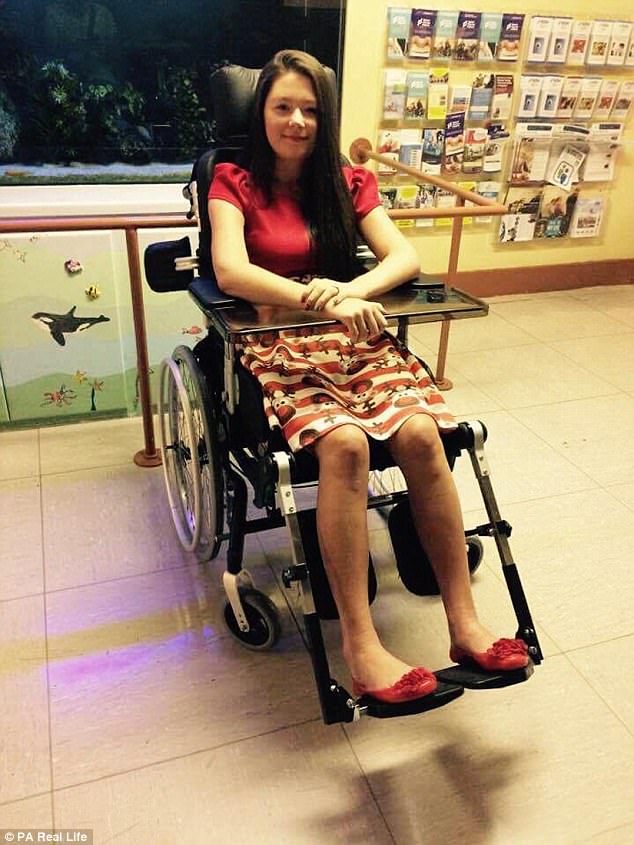 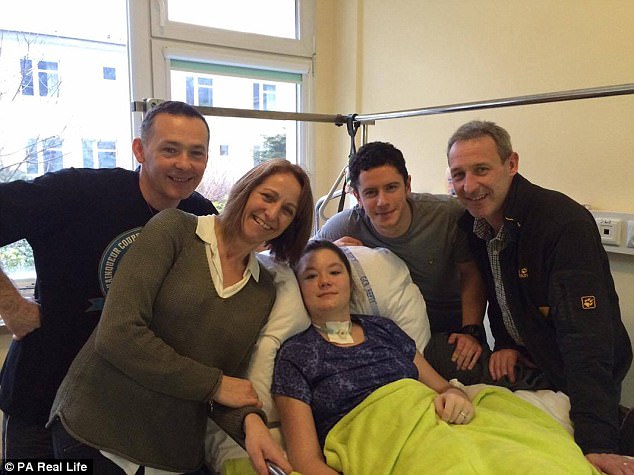 She was forced to communicate via a board and could not swallow, stand or speak (pictured with relatives, her boyfriend and other locked-in syndrome survivors)

‘My head felt like it was going to explode’

Describing been unable to move, Ms Rachwal said: ‘I woke up and I was 100 per cent with it. I could remember everything that happened, but I couldn’t move anything.

‘Luckily, my family came in and told me to look at the door if I could hear them, so we were able to work out a way to communicate quite quickly.

‘They would point at letters in the alphabet and I would blink when I wanted them to stop, so we could spell out words.’

Ms Rachwal’s ordeal began during a training session for her local volleyball team in September 2015.

She said: ‘I was doing a drill, which involved me jumping up a lot and when I landed on the ground for about the fifth or sixth time I had a really bad headache.

‘I walked off the court and took a sip of water, but I felt really weak.

‘I went outside with my coaches, but my headache was so bad, I couldn’t stand up and I sat down on the ground. My coaches decided to ring an ambulance.

‘My head felt like it was going to explode.’

While waiting for paramedics to arrive, Ms Rachwal, who has a microbiology degree from University College Dublin, began to experience paralysis on the left side of her body.

As the ambulance crew treated her, Ms Rachwal started vomiting and experiencing vertigo.

She was rushed to Naas General Hospital in County Kildare, and had scans, as well as a lumbar puncture, which involves inserting a needle into the spine to test for conditions affecting the brain, spinal cord or nervous system.

Kept in overnight, Ms Rachwal’s symptoms started to improve the following day and doctors told her all the scans had come back clear.

She said: ‘I was released later that day. I’d had flights booked to Poland, to visit family, but I’d cancelled them because I was in hospital.

‘So, I asked the doctors if it would okay if I rebooked them; they said everything was clear and it would be fine.’ 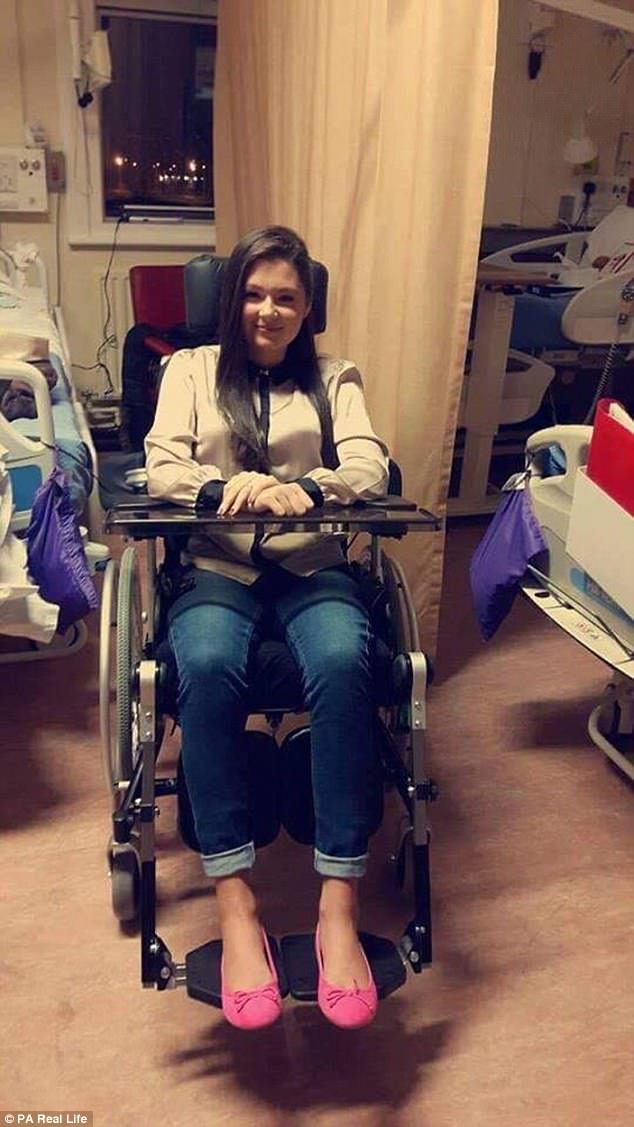 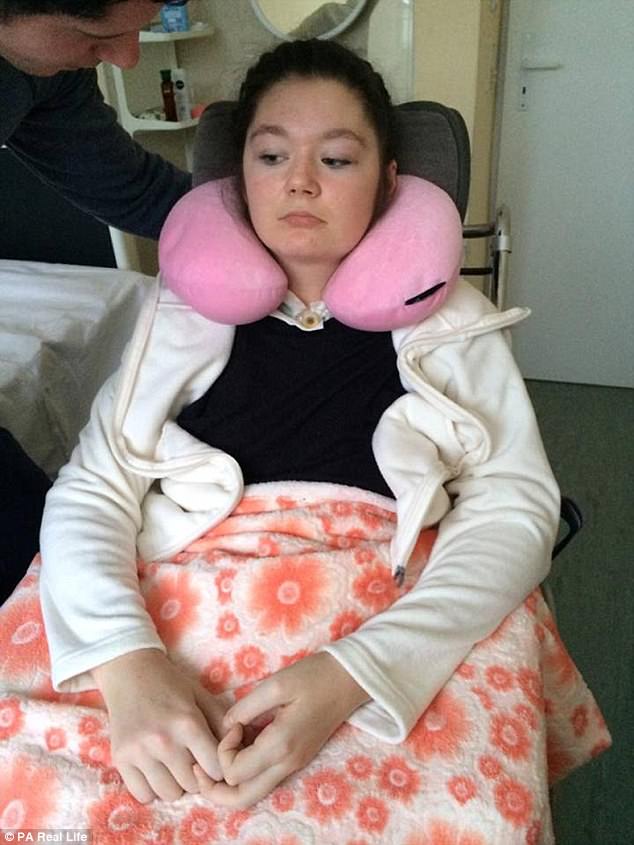 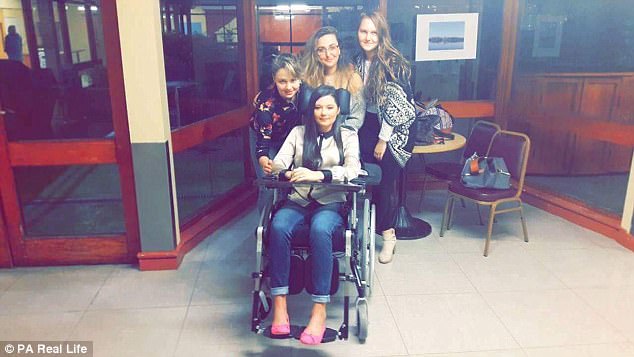 ‘My body wouldn’t allow me to make a sound’

Ms Rachwal and her then boyfriend Phil Moore rebooked the flights to her home city of Zywiec for October 2.

On October 7, Ms Rachwal, who moved to Ireland with her family as a teenager, was cleaning at her parents’ second home in Zywiec, when she started to noticed numbness in her left arm.

She said: ‘I went outside and told my boyfriend that there was something wrong with my hand. He was trying to calm me down, but my left leg was going numb.

‘My grandmother came down and we didn’t think it was too bad, but after an hour or so, I was getting much worse.

‘My head was spinning and my leg was so numb I couldn’t lift it over the bed. The ambulance came and I lost consciousness after I vomited.’

Ms Rachwal was rushed to Zywiec Hospital where she was placed in an induced coma.

When she woke the next day, she could not move anything except her eyes.

Ms Rachwal said: ‘It was really scary. I was trying to move, but I just couldn’t. Everything else was fine, but my body just wouldn’t do anything.’

Realising she was paralysed, doctors initially thought she was suffering from Gullian-Barre syndrome.

Yet, the following day, after she was transferred to Bielsko-Biala Hospital, an MRI scan revealed she had suffered a stroke and was locked inside her own body.

Her father Kris, 47, and Mr Moore sat by her beside with a board, allowing her to communicate with them, while her mother Sylwia, 45, travelled back and forth between Poland and Ireland.

Ms Rachwal said: ‘They were amazing. They helped me with everything I needed and encouraged me the whole way.’

In November, she was moved to a neurological unit at the same hospital, before she was transferred to the specialist Repty Rehabilitation Hospital near Katowice, Silesia.

There, Ms Rachwal began an intensive physiotherapy programme, slowly learning how to move each of her muscles again.

Four months after the stroke, she started to get her voice back .

Ms Rachwal said: ‘It was never a case that I couldn’t remember the words.

‘I knew what I wanted to say, but my body wouldn’t allow me to make the movement, or to make a sound.

‘I told her to call everyone in and I made the sound. Then we started going through the alphabet. I could build up the sentences and my voice started to come back.’. 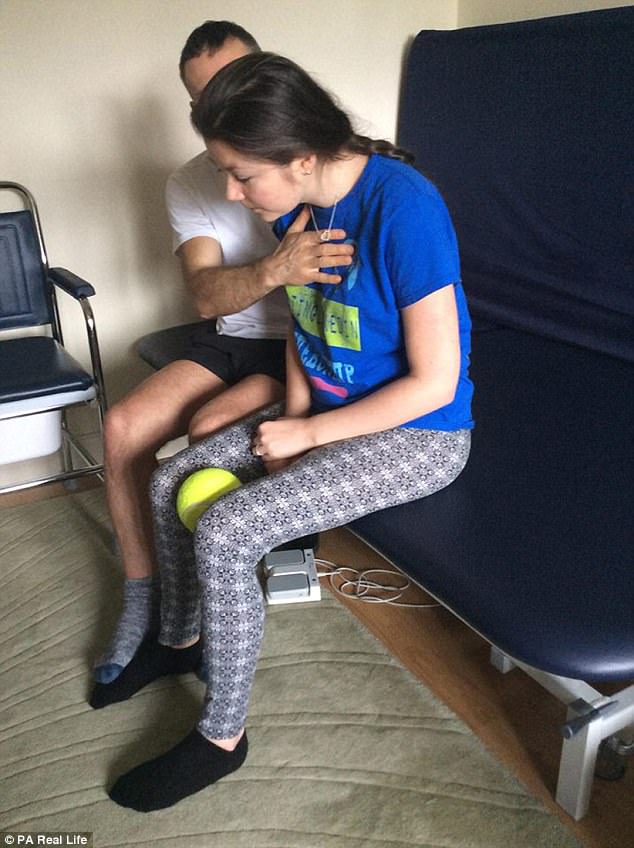 After months of physiotherapy, she is slowly regaining the ability to speak, stand and swallow 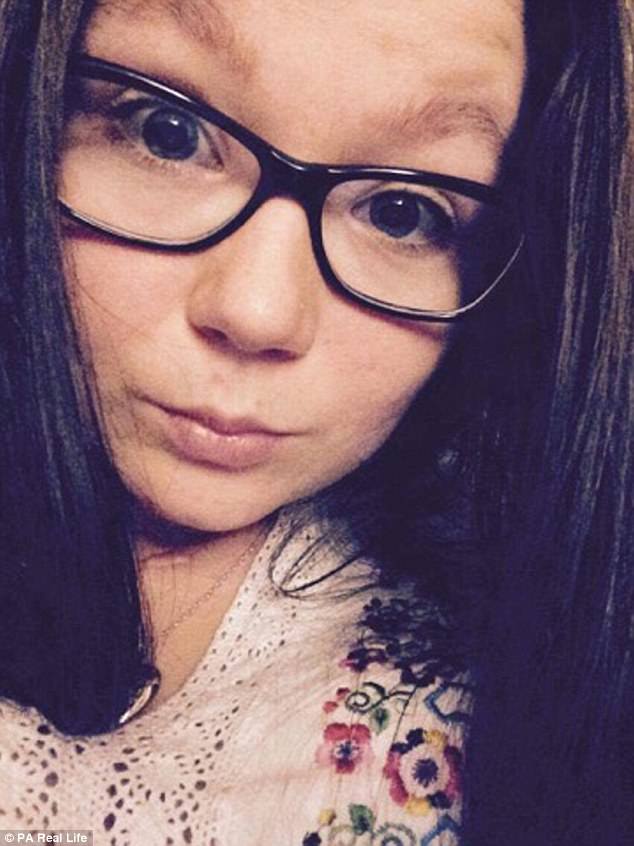 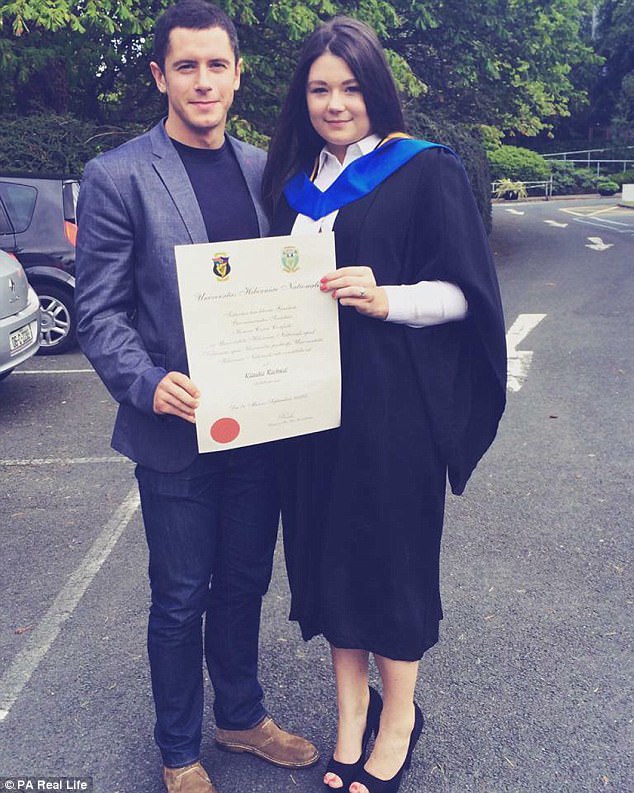 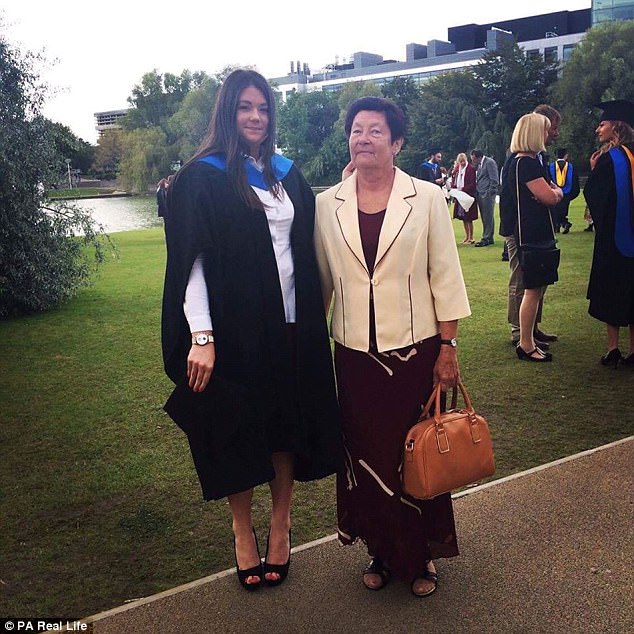 She has a microbiology degree from University College Dublin (pictured with her grandmother, who she first alerted when suffering symptoms at her parents’ second home)

‘Its been a long journey’

In March 2016 her family decided to take her back to their home in Poland for private physiotherapy.

Almost a year after her stroke, in September 2016, she returned to Ireland and was admitted to Dublin’s National Rehabilitation Hospital to continue her recovery, before moving again to Orwell Private, a nearby nursing home, in March.

Ms Rachwal said: ‘My recovery has been long and quite hard.

‘Day to day, I feel like I’m not making any progress, but when I look back on how far I have come, it is amazing. It’s not easy and I work really hard every day, but I have had so much support.’

‘I have met a lot of other people online who have had strokes and locked in syndrome.

‘Its been a long journey and I wouldn’t have got this far without them.’