A woman has revealed her top money-saving and investing tips in a bid to achieve financial freedom – while detailing how the same clever methods helped her retire at the age of 36.

Rachel Covert, 37, from Massachusetts, is a self-proclaimed ‘digital nomad’ who has been given the freedom to travel wherever she wants, whenever she wants, after retiring in her mid-thirties.

Growing up, she recalls her parents being ‘frugal’ with their cash, explaining that they lived in an old home, drove their cars until they fell apart and relied on home-cooked, low-cost meals.

In 2007, after graduating with a degree in fashion design, Rachel often found herself unemployed due to the recession and while her ‘small trickle’ of income was enough for her to survive, she knew that she needed to take action in order to begin making more money.

Rachel says she realized that time was her ‘most valuable asset’ after being diagnosed with rheumatoid arthritis, and, as a result, she decided to start investing her money while also following the four per cent rule – that sees her never spending more than four per cent of her assets in a given year –  in a bid to live her life to the fullest.

Rachel Covert, 37, has revealed her top money-saving tips in a bid to achieve financial freedom – and claims they helped her retire before her forties 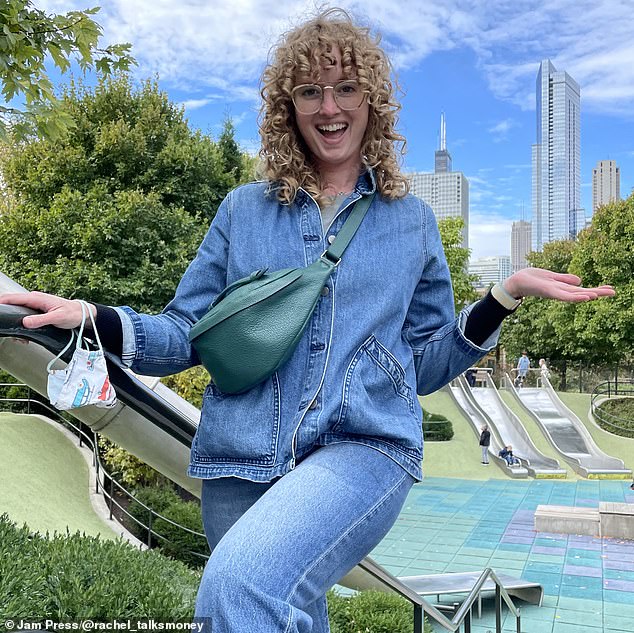 Consistency is key! Have a clear plan and stick to it

Upon graduating college, Rachel was working as an assistant designer and making about $35,000 a year.

Wen the recession hit she was laid off and shifted her focus to a different job – where she made six figures a year.

Although she was making substantially more, she kept on the same track and made sure she didn’t stop saving.

Many of us are looking for the cheapest deals in a bid to save the pennies on monthly expenses – and where we can tighten the purse strings.

While this is important, it’s also crucial to keep tabs on unnecessary outgoings.

She said: ‘You need to be super clear on your expenses, as if you don’t know where all your money is going, you won’t be able to design the life you desire.

‘The easiest way for me to do this was to stay in the same housing for long periods of time, as I knew how much it would cost to be there.

‘I also only ate my favorite foods and I knew how much I would need to pay for vacations or something similar ahead, so I’d also be aware of how much I had to spend on the trip.’

Rachel explained she had a clear and aggressive plan after graduating.

‘I knew I wouldn’t be able to travel and enjoy my life when I’m older, so this really drove me to make a change,’ Rachel, who shares her advice on TikTok, said.

‘I still saved and invested where I could in my early years, but not with the aggressive drive I had [later on].

‘Immediately upon graduating, my parents told me I need to use my 401k, a workplace retirement plan which invests money in a variety of choices.

‘All throughout my 20s, I used my company-sponsored matches and invested for my retirement.

‘Initially, my goal was to retire someday, but as time passed, I wanted to opt out of the corporate system and be able to own my time in whatever form that worked out to be.’

Don’t give up! Focus on growing, even when you have already saved 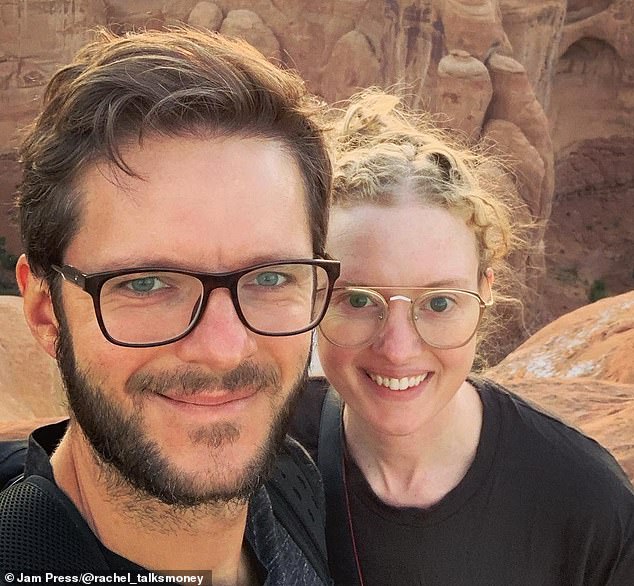 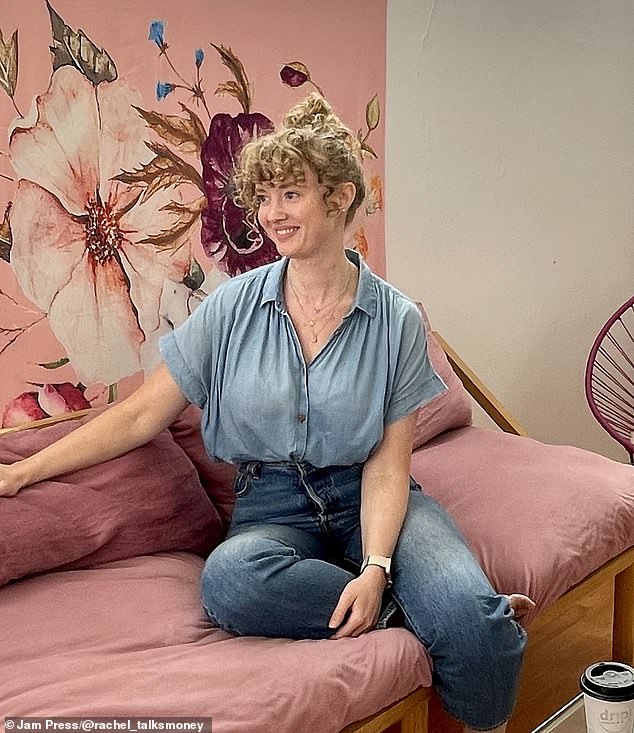 Rachel started to realize time was her ‘most valuable asset’ after being diagnosed with rheumatoid arthritis, and, as a result, she decided to start investing her money

Sometimes, it’s not necessarily about saving money or finding the best bargains – but about looking where you’re able to increase your income.

Rachel said: ‘I found the easiest way to do this is by asking for a raise or promotion.

‘You’ll have to demonstrate that you deserve the extra money and you probably already do – it’s a matter of proving it.

‘If you also apply for jobs which pay more and have the confidence to say how great you are, then that will also help boost your income.

‘I’m not a huge fan of side hustles, because I like to protect my free time, but that works very well for many people too who are able to put in some extra hours.’

Rachel, who used to work as a fashion designer, now works up to 75% of a ‘normal’ work week with her freelance business – but claims she wishes this was done sooner.

She said: ‘I wish I had changed careers and found something less stressful, or possibly launched my own business earlier.

‘Now, I enjoy work so much that it doesn’t feel like a burden.

‘I’ve realized that it’s not about never working again, but about finding work or purpose that feels like joy and allows room to grow, as well as flexibility.

‘I spent far too long stuck in my career because I was too afraid to make a big change and instead, I waited until I had enough money to live off before quitting.

‘Full retirement isn’t the goal for me anymore, it’s about financial stability and flexibility.’

Don’t stop believing! Have faith in yourself to achieve financial freedom 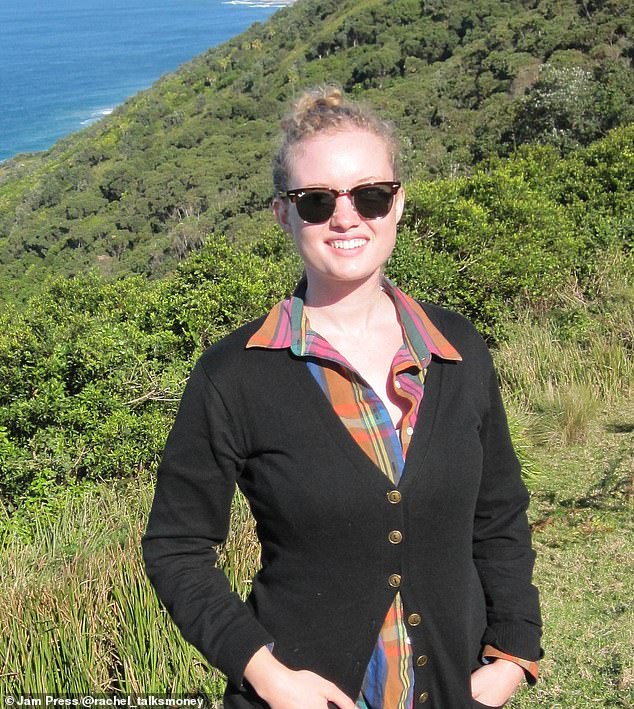 It’s very easy to put ourselves down and think we’re not worthy of achieving our goals, but Rachel believes it’s all about having a positive mindset.

She said: ‘If you focus on believing that you can get wealthy by reading books or getting familiar with how the wealthy think, it’s attainable.

‘But only if you believe you can do it.

‘Understand your goals and why you’re working toward them, as if you don’t have a solid path, you won’t be able to get there.

‘Also, you need to have some patience – this was a 14-year journey for me and I was more aggressive in the final seven.

‘Every week that you put off starting your financial freedom, works out to years of extra work before retirement.’ 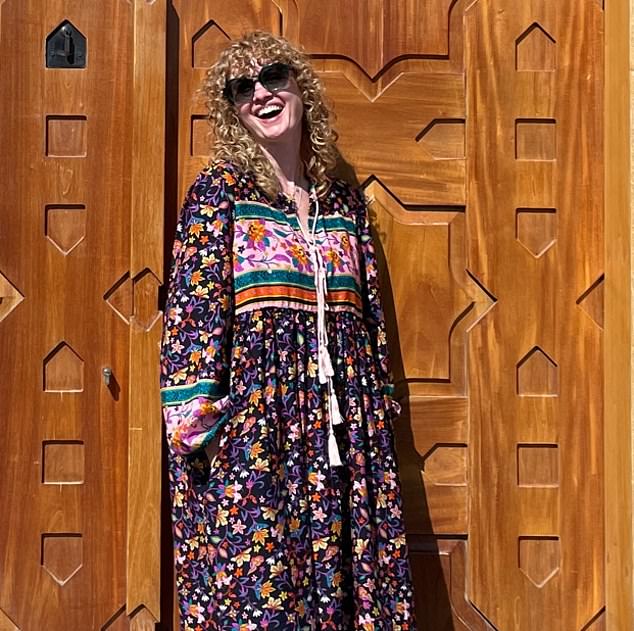 While it seems counterintuitive to depart with savings during the cost of living crisis, this can help to benefit any financial situation in the long run.

It’s a risky game, but investing small amounts over a long period of time can help to boost your income for the future.

She said: ‘No, you don’t have to be Warren Buffet to be a successful investor and it’s actually more of a hands-off approach that’s better in the long run.

‘Instead, learning about investing in things like low-cost index funds or tax-advantaged accounts like ISAs, is a great place to start.

‘Before I quit working, I invested in multiple accounts every month for seven years and in total, I’ve been investing for 15 years.

‘To this day, I still use tax-advantaged accounts to invest in low-cost index funds and that approach continues to be the soundest, most reliable strategy to build wealth for both the average person and the wealthy.’

Is it worth it? Splurge on valuables and avoid unnecessary purchases 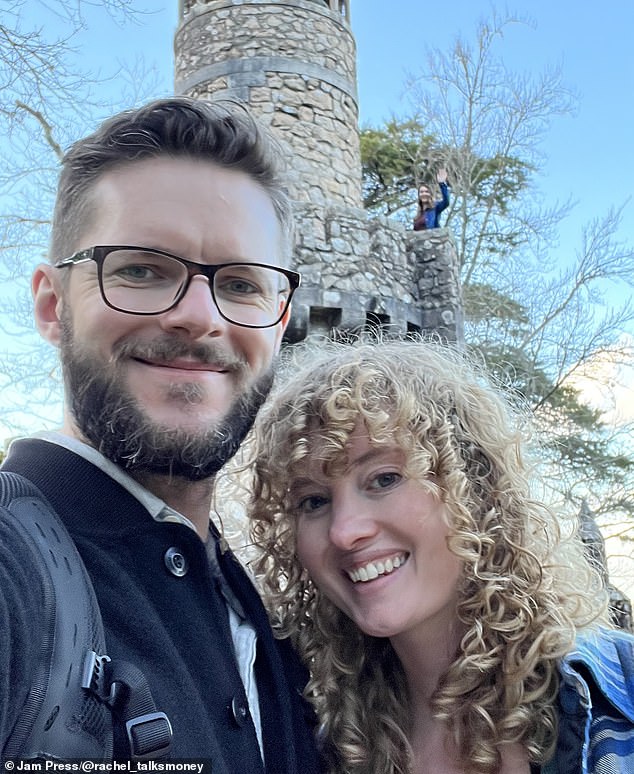 Rachel believes there’s a difference between unnecessary, frivolous expenses and expensive, worthwhile ones.

Although an item or experience might cost a lot of money now, it’s deciding whether the purchase will benefit in many years to come or if it’s something which will be forgotten.

Rachel said: ‘I find testing ‘cutting’ things out of your life the best approach. 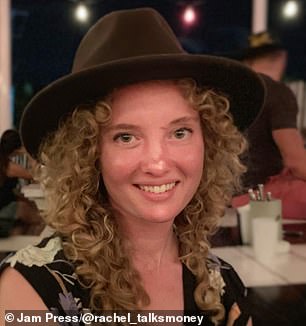 ‘Ask yourself: “How does it feel to cook simple meals?” rather than going out multiple times a week, does this make you feel better in more ways than one?

‘Look at the big picture, how much money will that save you over the year? Look at the cost per use.

‘For example, a good quality coat that you’ll wear daily is likely a good investment, but killer stilettos for a friend’s wedding? Probably not a great purchase.

‘When I was little, money was genuinely very tight and even as things improved, my parents didn’t value material things.

‘They value travel, art and financial security – so I picked up a lot of my habits from them.

‘I’m able to stretch a dollar when I need to and like them, I don’t eat in restaurants all that much.

‘In exchange for their behaviors, I travelled to Europe multiple times, had ballet and violin lessons, art classes and so much more.

‘They focused their money in alignment with their priorities and I don’t consider myself to be ‘tight’, but I do spend my money on the things that really matter to me.

‘I have cut back on the things I no longer need and I don’t buy many clothes or drink alcohol nearly as much as I used to.’ 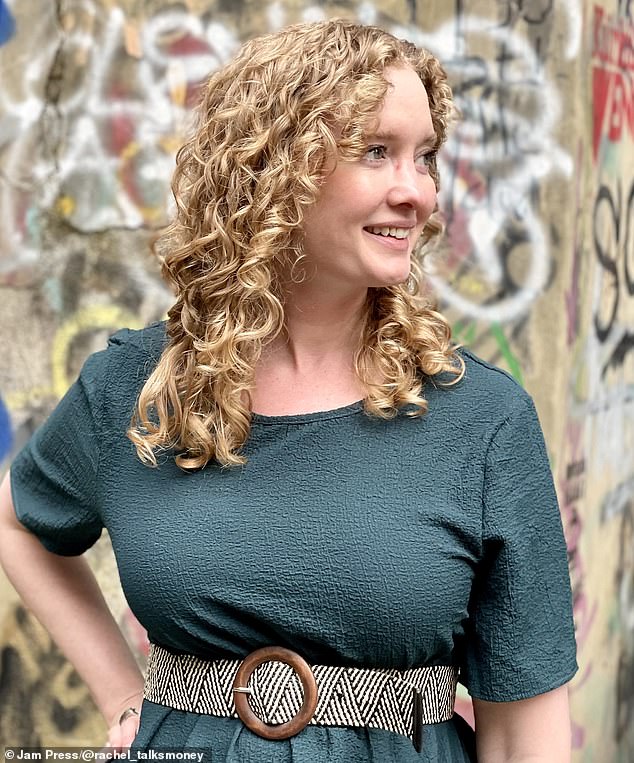 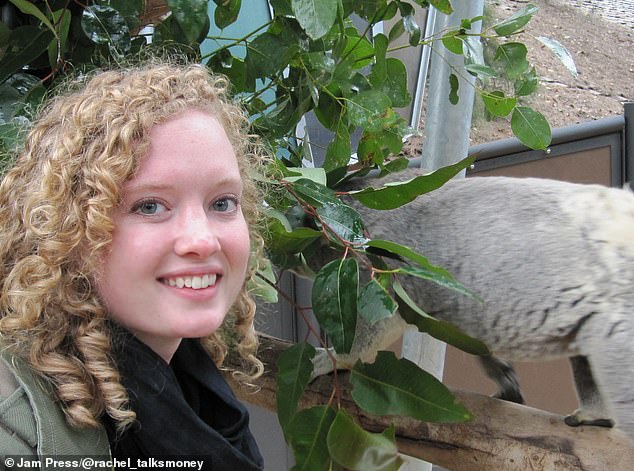 Now, she’s used her top tips to help secure financial freedom and runs her own freelance coaching business for others on how they can achieve this too.

Overall, she’s helped over 40 people shape their futures and while she understands everyone has different goals, Rachel loves being able to see people taking charge of their lives.

In a bid to ensure her costs are kept low and there’s enough in her retirement fund to keep ticking over, she’s embarked upon a ‘nomad’ lifestyle along with her partner, Liam, 39.

She said: ‘I keep housing, transportation and food costs low.

‘I do this mainly by travelling in the off-season and in terms of ensuring I have enough in my fund, I use the 4% rule.

‘Essentially, you never spent more than 4% of your assets in a given year and I retired with a healthy cash cushion using this.’ 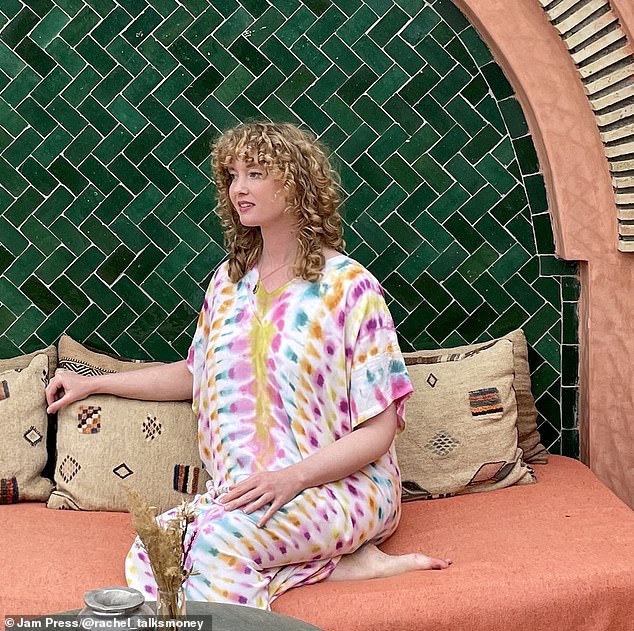 In a bid to ensure her costs are kept low and there’s enough in her retirement fund to keep ticking over, she’s embarked upon a ‘nomad’ lifestyle

For Rachel, one of the biggest aspects she enjoys the most about early retirement is being able to wake up without an alarm – and taking time to practice the hobbies she loves.

She added: ‘I love going to the grocery store in the middle of the day and taking long walks whenever the mood strikes me. 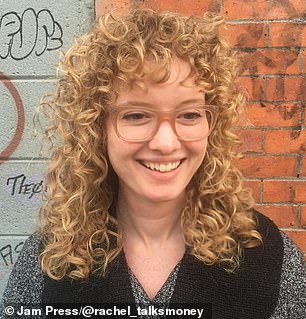 ‘I’ve been really enjoying building my business and learning about the world of online entrepreneurship without the pressure of knowing I must succeed for my bills to be paid.

‘Money is the most important tool in the belt, as it influences our ability to do so many things, both good and bad.

‘I wanted to control my life instead of letting my financial situation dictate mine.

‘Aside from family and friends, I wasn’t put on this earth to sit under fluorescent lights earning money for someone else.

‘Most of all, I wanted my own time, as I’m not sure how long my body will remain healthy and taking advantage of every opportunity is key for me.

‘If you already know working full-time isn’t for you, then what are you waiting for? Take action to change your own future.’

In the past, another woman shared her budgeting tips that helped her rid herself of nearly $35,000 in debt.

Dyana King, 30, from Arkansas, shared that six years ago she saw herself strained with $34,907 in debt and used the snowball method to pay it all off.

The snowball method is the practice of listing out every debt you owe and paying off the smallest debt first before working to pay off the next smallest debt.

‘The church said I was seducing the pastor at 13… because I wore a pencil skirt’: People reveal shocking reasons they abandoned their religion in viral TikTok trend