A woman who suffered from abdominal pain and felt like there was a ball rolling around inside her for six years was found to have a rare disease called ‘floating kidney’.

The unidentified 28-year-old had seen several doctors over the six-year span to try to pinpoint the cause of the strange symptoms before meeting with urologists at Henry Ford Hospital in Detroit, Michigan.

She explained that the pain was worst when she was standing or sitting upright and was lessened when she laid down, but when switching positions she felt the sensation of ‘a ball rolling’ inside of her, according to a case study by the hospital.

The woman also reported the pain was less intense particularly in the later stages of her previous pregnancies.

After a barrage of invasive tests, many of which she had undergone before, the woman was diagnosed with nephroptosis, a condition in which the kidney strays several centimeters from where it’s supposed to be located.

It’s been estimated that one in five women in the US have a floating kidney, but the majority don’t experience any symptoms.

Even in serious cases such as the one presented in this study, the condition is simple to diagnose and treat, if doctors take the time to look for it. 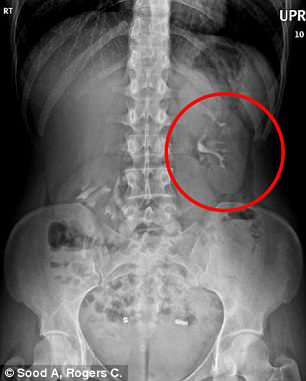 A woman who suffered from abdominal pain and felt like there was a ball rolling around inside her for six years was found to have a rare disease called floating kidney, in which her right kidney migrated five centimeters each time she stood up (right) compared with when she was laying down (left)

The doctors performed a physical exam followed by multiple lab tests and scans, but each result came back as normal.

They then performed an intravenous pylography, which involves injecting dye into a person’s arm that flows to the kidneys, ureters and bladder, allowing for a clear view of the entire urinary tract.

The procedure revealed that the woman’s kidney moved six centimeters when she laid down and sat back up.

She was diagnosed with nephroptosis, a congenital condition that occurs almost exclusively in women, affecting an estimated 20 percent of women.

The exact prevalence in the general population is unclear because 80 to 90 percent of people don’t experience any symptoms.

For the other 10 to 20 percent there is a very specific set of signs and symptoms, according to the case study.

The most common of those symptoms are the same ones that the woman had described: abdominal pain that changed with position and was lessened during pregnancy and an odd feeling of a mass moving in the abdomen.

Like other organs in the body, the kidneys are normally able to shift a few centimeters without creating any problems, but in nephroptosis the shift is much more dramatic.

Researchers have struggled to pinpoint the exact causes of the condition, but has been thought to be related to insufficient support from structures or the connective tissue around the kidneys.

The authors of the current study hypothesized that because nephroptosis is more commonly diagnosed in thin women, the condition may be caused by an absence of fat surrounding the kidney.

Following the diagnosis the woman underwent a laparoscopic nephropexy, a surgical procedure that secures the kidney to its intended spot in the body.

Within four weeks she was no longer experiencing any pain and her symptoms had finally been relieved after six years.

The authors concluded that more doctors should consider nephroptosis when examining cases of unexplained abdominal symptoms such as this one because the diagnosis and treatment are so simple.