A woman who got leukaemia twice as a teenager has returned to work in the same hospital which treated her – but she now has cancer for a third time.

Catherine Pointer, now 26, is a cancer researcher at Southampton General Hospital, where she was twice treated for leukaemia at the ages of 14 and 17.

Miss Pointer, from Fareham, was so inspired by doctors treating her for the disease it sparked her into embarking on a career saving other cancer patients’ lives.

She is now on the cusp of becoming a doctor as she works on her PhD at the Cancer Research UK Centre, based at the hospital in Hampshire.

But she is now both an employee and a patient as she has been diagnosed with cancer yet again, this time on her skin as a direct result of her treatment years ago.

Catherine Pointer, now 26, had leukaemia twice as a teenager but has now returned to the hospital where she was treated to work as a researcher at the Cancer Research UK Centre

Miss Pointer said: ‘Cancer had already dominated my life so much but it came to be the thing that interested me most and the only thing I wanted to choose as a career.

‘I don’t want the next 14-year-old girl to go through what I’ve had.

‘Being back in Southampton but now as a cancer researcher rather than a cancer patient feels like the exact right place for me to be, like it’s gone full circle.

‘Once, when my parents dropped me off at the hospital, they said how much they hated being back at the place where I was ill.

‘But I don’t see Southampton General as the place where I was ill – it’s the place that made me better.’

After receiving chemotherapy and radiotherapy to fight off her two bouts of leukaemia, Miss Pointer spent years free of the disease.

During that time she has trained as a biomedical researcher and completed most her PhD, which she will soon finish.

But the 26-year-old was told in February she has skin cancer, and says it is a direct result of her earlier treatments.

She has basal cell carcinoma – a slow growing cancer which does not spread – on her head, and has had four of the tumours removed from other places on her body.

Bone marrow transplants carry a small risk of causing secondary cancer, Cancer Research UK says – which is what Miss Pointer says triggered her new skin cancer – but the benefit of treating the leukaemia outweighs that risk.

Miss Pointer said: ‘It’s a really mild type of cancer that doesn’t spread so these are five individual separate tumours which have occurred.

‘They are being removed surgically one by one and there’s a couple of other spots we are going to keep an eye on in the future.

‘Medically speaking I knew this was completely different to the leukaemia – no threat to my life or anything severe to worry about.

‘Essentially I was told to carry on as normal. But as a patient I really struggled mentally with hearing the news.

‘I paused my PhD and had a few counselling sessions at the Macmillan centre in Southampton General to deal with all the emotions of the new diagnosis, which made a really big difference to my mind-set.

‘I’ve accepted I probably can’t stop myself getting cancer again, but through my work I can help push medicine to a place where being diagnosed isn’t such a scary prospect anymore.

‘All I want is to grow old with my soon-to-be husband and be able to raise a family.’ 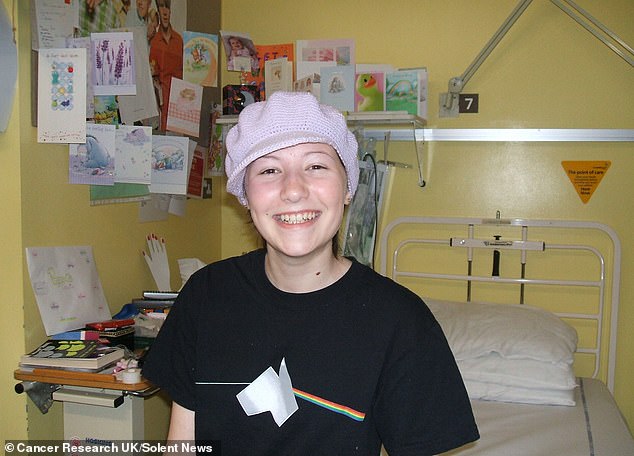 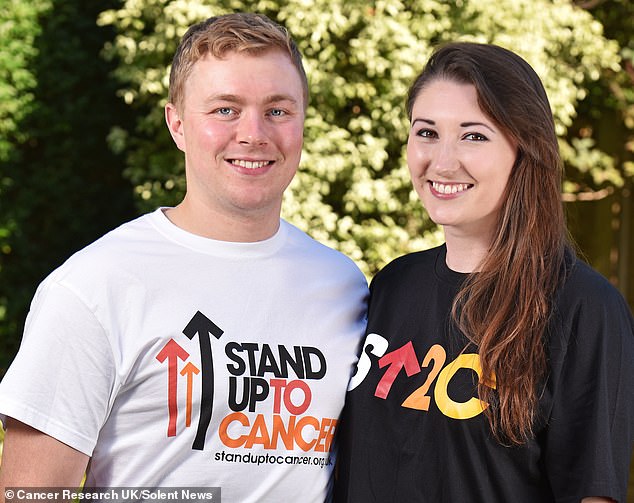 Miss Pointer is engaged to be married to army captain Ash Dale, 26, and wedding guests have been asked to contribute to the cost of IVF instead of giving presents, because Miss Pointer’s cancer treatment means she may not be able to conceive

And instead of gifts, their wedding guests have been asked to help fund IVF treatment as Miss Pointer will struggle to have children of her own as a result of her cancer treatment.

Her illness began when she was 14 years old and was on a summer holiday with her family when she became very unwell, losing a significant amount of blood.

WHAT IS ACUTE MYELOID LEUKEMIA?

Acute myeloid leukemia (AML) is a type of blood cancer that starts in young white blood cells in the bone marrow.

Within two weeks she had lost a lot of weight and could barely stand without passing out.

After four cycles of the treatment she went into remission, but at 17 was diagnosed with the disease again as she began her A-levels.

She underwent gruelling total body irradiation – a form of radiotherapy aimed at the whole body to try and kill off leukaemia cells before a bone marrow transplant.

Miss Pointer said: ‘I was scared – I knew that if it failed I was accepting the fact I would die very young.

‘I remember lying on my hospital bed and telling my mum I just couldn’t do it anymore.

‘I was exhausted but couldn’t sleep, it took everything I had just to open my eyes.

‘I could feel everything shutting down inside me. I looked in the mirror and didn’t recognise the person I saw.’

Miss Pointer made a full recovery and went on to complete a biomedical science degree at Sussex University.

She now works among an elite group of scientists improving treatments and survival rates for head and neck cancer patients.

And the now-retired consultant who first treated her and inspired her to become an expert is even invited to her wedding.

Miss Pointer said: ‘Even before I became ill I liked the idea of being a scientist but, without doubt, my own experience convinced me.

‘I may have been young when I was diagnosed but I still had so many questions.

‘I remember my consultant taking me into the labs and showing me my cells and bone marrow to try and help me understand what was wrong with me and how they were trying to make me better. 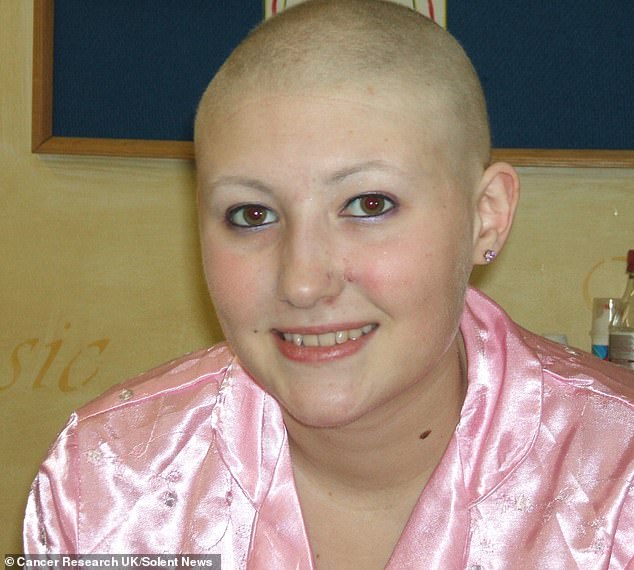 Miss Pointer feared she would die when she was being treated for leukaemia as a teenager and said: ‘I could feel everything shutting down inside me’ 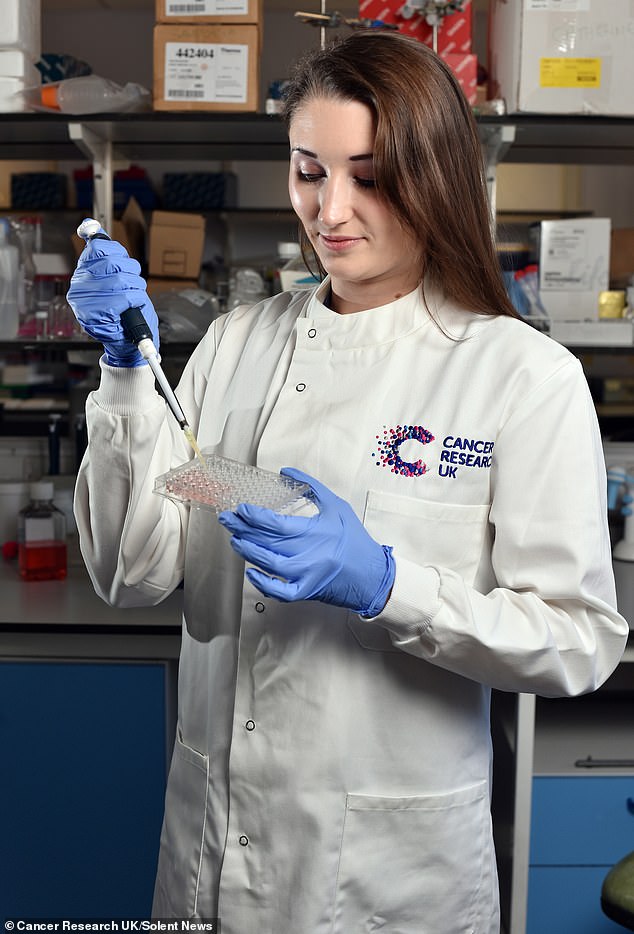 Miss Pointer says she now feels like her work could make a difference to the lives of other people, adding: ‘I’m no longer the sick young girl on a ward. I know that what we do every day is going to help people with cancer in generations to come’

‘I now know I can’t stop myself getting cancer again, but by working at CRUK Southampton I can make sure I’ll be ready for it next time.

‘That’ll help a lot of other people along the way too.’

Miss Pointer now hopes her work will one day help people to avoid going through the same difficult treatment she suffered in her teenage years.

She added: ‘I did work experience at Southampton and really liked what they are doing there – it feels like it is really going to make a difference.

‘I’m no longer the sick young girl on a ward. Now I walk around with a Cancer Research UK lanyard around my neck knowing that what we do every day is going to help people with cancer in generations to come.

‘I want to see the day that people going through cancer can come through the other side and be able to live, not just survive with a lifetime of side effects from the treatment they had.

‘People shouldn’t have to choose survival at the expense of being able to live – there has to be a better outcome than that.’