Woman, 31, had a 1cm bruise on her shoulder for six years before doctors realised it was a rare CANCER

A woman who thought she had a bruise on her shoulder for six years was actually suffering from a rare form of skin cancer.

The 31-year-old – who has not been named – noticed a 1cm purple mark on her left shoulder had not faded in more than half a decade.

After finally seeing her GP, she was referred to the department of dermatovenereology – which treats STIs that have led to skin disease – at the Hospital de Braga in Portugal.

A biopsy revealed the woman did not have a sexually transmitted infection but dermatofibrosarcoma protuberans (DFSP); a rare type of cancer that develops in the deep layers of skin.

Surgeons removed the blemish, with the woman reported to be doing well two years on. 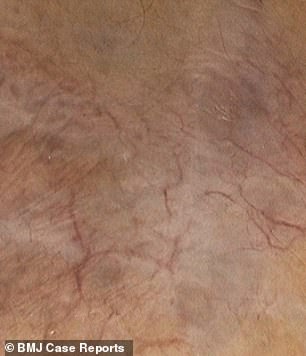 A woman who thought she had a bruise (left) on her shoulder for six years is actually suffering from a rare form of skin cancer. When doctors took a biopsy, they discovered streaks running through the blemish (right), which suggested the abnormal growth of cells

The woman, who was otherwise healthy, noticed her ‘bruise’ had gotten bigger over the years, according to BMJ Case Reports.

She also could not recall ever having accidentally ‘bumped’ herself to get the mark in the first place.

When it was examined by medics at the Hospital de Braga – led by dermatovenereologist Dr Filipa Tavares Almeida – the blemish turned a deeper shade of purple.

The doctors also noticed the mark had blue-white streaks running through it, which suggested the abnormal growth of cells.

A biopsy led to the woman being diagnosed with a Bednar tumour, which makes up just five per cent of DFSP cases.

The tumour – which usually affects the midriff, back or shoulders – rarely spreads, with patients having good survival rates after treatment.

Bednar tumours are made up melanin, which gives cells their colour, and causes DFSP blemishes to be red or brown.

Marks caused by the cancer are often misdiagnosed as the harmless skin growth dermatofibroma.

They can also be mistaken for cancer of the cells that produce fibrous tissue, known as fibrosarcoma, or deadly melanoma.

The authors urge any lesion that does not get better on its own should be biopsied.

WHAT IS DERMATOFIBROSARCOMA PROTUBERANS?

Dermatofibrosarcoma Protuberans (DFSP) is a rare type of cancer that develops in the deep layers of the skin.

Around one-to-five in every million develop the condition. Black people are twice as at risk as white patients.

It most commonly forms on the midriff, but can also be seen on the limbs, head and neck.

Although DFSP can reoccur in the same place after it has been removed, it only spreads elsewhere in the body in around five per cent of cases.

The tumour often starts as a 1-5cm patch of skin that may be purple, red or flesh-coloured.

It typically grows very slowly over months or even years, and can become raised. Redness and pain only occur in 15 per cent of cases.

It is unclear what causes DFSP. A scar that develops after a burn or surgery may be a risk factor. The disease is not thought to be hereditary.

If the tumour has spread, radiotherapy may be required. Chemo does not appear to be effective.

Even in cases where the tumour has reoccurred, surgery has been shown to have up to a 98 per cent cure rate.