A woman who is struggling to work at home because of her neighbours playing loud music has sparked a heated debate over who is in the wrong.

Posting on the UK parenting forum Mumsnet, the unnamed woman explained she has been working in her home office with her doors open because of the heat and the space is around three metres away from a fence separating her garden from her neighbours’.

She said her neighbours, who are a retired couple, spend most of their days playing music, smoking and sometimes have loud visits with their grandchildren, but the final straw was playing loud techno music that could be heard during her work conference calls.

Many commenters sympathized and told the woman her ‘antisocial’ neighbours shouldn’t play their music for everyone else to hear, however others argued it’s her responsibility to move her office space and unreasonable to expect her neighbours to be quiet in their garden because she’s working.

The woman admitted this isn’t the first time she’s had difficulties with her neighbours, saying that ‘he’s attended anger management courses in the past’.

Explaining her current predicament, she said the neighbours have built ‘a permanent gazebo attached to the fence, which takes light away from her living room.

‘It’s been there for longer than we could now report it so it’s there to stay,’ she said. ‘Given they are a retired couple, they spend most of their days sitting there, smoking and playing music.

‘When their grandchildren come over to use the temporary pool, it’s constant shrieking (and throwing stuff into our garden!).

‘We usually don’t say anything but today they have started playing some sort of techno music so loud that the people on my conference calls can hear it through my laptop microphone. I have the door open because of the heat.

‘I tried to call out “Hello? hello?” in a “friendly voice” but nobody answered. So they either left the music going and left the garden, or just don’t care at all. I am getting more and more annoyed at the fact that I might end up having to close the door because of their music, especially in this heat.

‘Am I being unreasonable to think they should be more considerate? That when they built that structure attached to the boundary fence they should have realised they couldn’t use it as if it where further from our garden? And, more importantly, how can I get them to stop playing loud music?’ 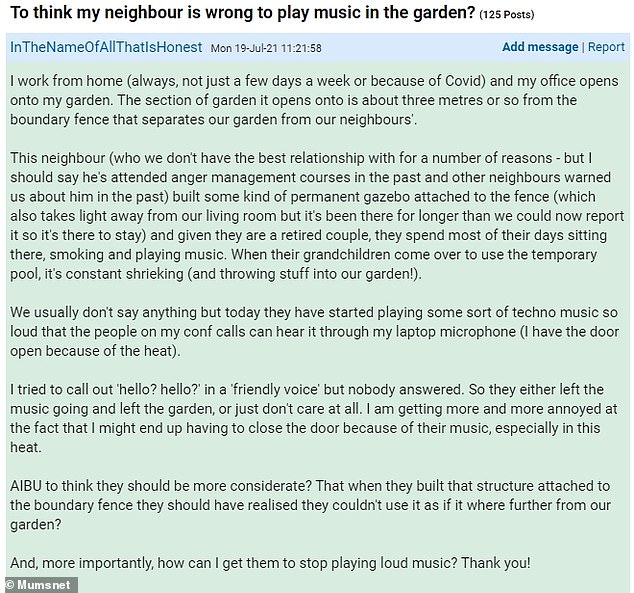 Posting on Mumsnet, the woman explained her neighbours’ music is loud enough to be heard on her conference calls

A flood of responses argued the woman should move her office space instead of expecting her neighbours to adapt to her need for quiet.

One person wrote: ‘The neighbours can do what they want on their land. If you are so in need of a quiet space, why don’t you relocate your office? Surely you could move to another room for conference calls and the like if this really is a problem. Or just accept it.

‘Alternatively get an office at another location – I presume you are running a business from home to save money on office costs. Maybe if you want a quiet environment you should work in an office block where other people are working, not a residential area? Just a thought?’

Another said: ‘I don’t think you can really complain about noise if you’re working with the door open, of course you’re going to get disturbed. Yes their music is annoying but what if they were cutting the grass, kids playing etc. Close the door and buy a fan or portable air con unit.’

A third added: ‘You cannot expect to have a working environment at home and that your neighbours will enable that. Home is home, where families all around you will be living their daily life.

‘It is unreasonable to expect them not to enjoy themselves and play music because you’ve decided to make your home your work too. If you cannot solve the problem with headphones or a mic, it is not feasible for you to work from home.’

Others defended the woman, with one saying: ‘I don’t think it even matters that you are working. It is antisocial, inconsiderate and rude to make yourself such a nuisance. No one needs to listen to music that loud.

‘If neighbours can hear you, you are too loud. When people decide to live in a residential area, they implicitly accept to keep their noise down for other people. If you want to be loud, move in the middle of nowhere.’

Another wrote: ‘I find outdoor music very antisocial. I’m currently having to listen to inane childish drivel interspaced with some dire “music” from the radio being used by the builders next door. We had it all weekend from them too.’