A woman who would struggle to breathe after walking up a flight of stairs or from tying her shoelaces, is now on a waiting list to remove 20lbs of excess skin after losing more than half her body weight.

Catherine Shanklin from Oklahoma City, tipped the scales at 420lbs and wore 6XL pants size at her heaviest.

She suffered from a number of health conditions, including polycystic ovaries, immune disorders, high blood pressure and diabetes. Doctors repeatedly warned that she was putting her life at risk due to her weight.

Medics urged her to have gastric bypass surgery after multiple warnings about her health, but Catherine persevered to lose 260lbs entirely naturally.

However, her weight loss transformation isn’t over, because she’s currently waiting for surgery to remove an estimated 20lbs of excess skin.

Catherine Shanklin (pictured) from Oklahoma City, who once weighed 420lbs, revealed she’s been left with an estimated 20lbs of excess skin since overhauling her lifestyle 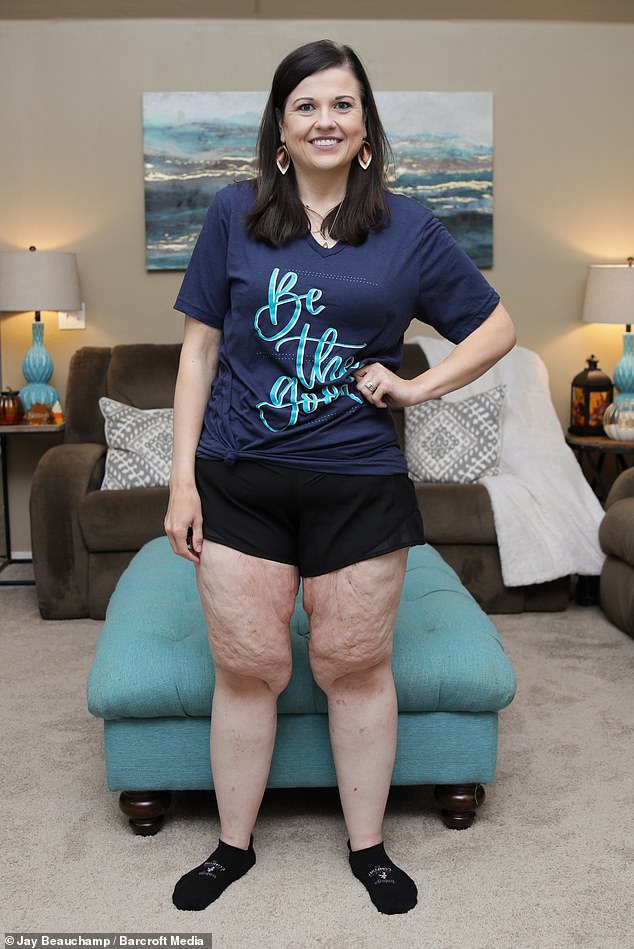 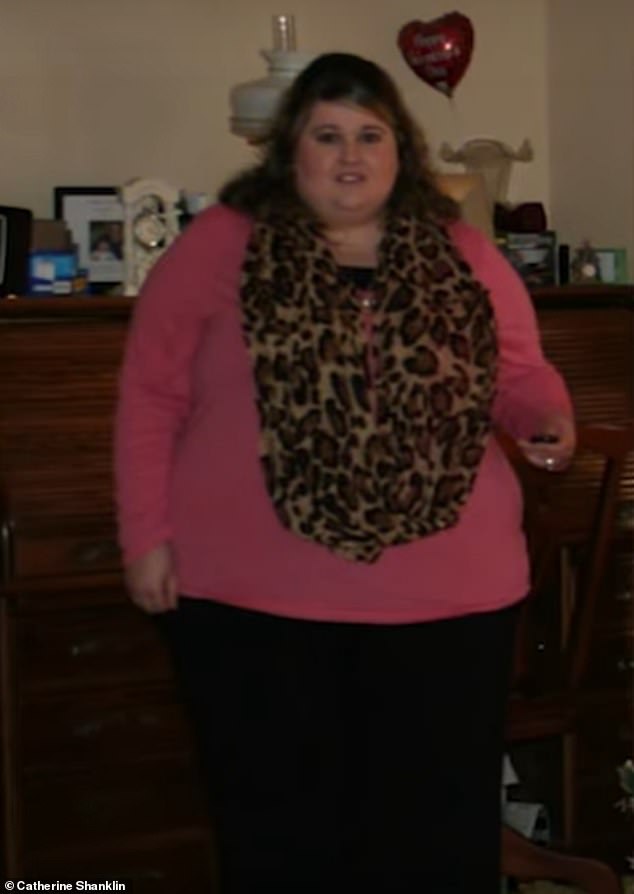 Catherine (pictured before) would go to an amusement park and have to watch everyone else have fun, at her heaviest

Catherine has had health complications, causing her to delay having the surgery while her body heals from invasive vein removal procedures.

Despite the hurdle, she admits that she can’t believe how far she has come.

‘It took me exactly three years to lose the weight,’ she said. It still shocks me when I see pictures and I’m like, “Is that really me?”.

‘I am so glad I stayed the course to do it on my own and opted out of having surgery.’

Describing her relationship with food as her ‘second soulmate’, Catherine revealed it became the solution to however she was feeling.

She continued: ‘I feel sad, I am going to eat, I am bored I am going to eat, it is an emotional connection that I had with it that literally I knew I had to break up with it. It is an addiction; I think it is just like a drug or anything else.

‘Being 420lbs we would go to an amusement park and I was the one standing on the side lines just waiting there for everybody to have fun. Riding on a plane, I was the person that had to have that extra seat belt all the time, and sometimes probably need two or three extenders. 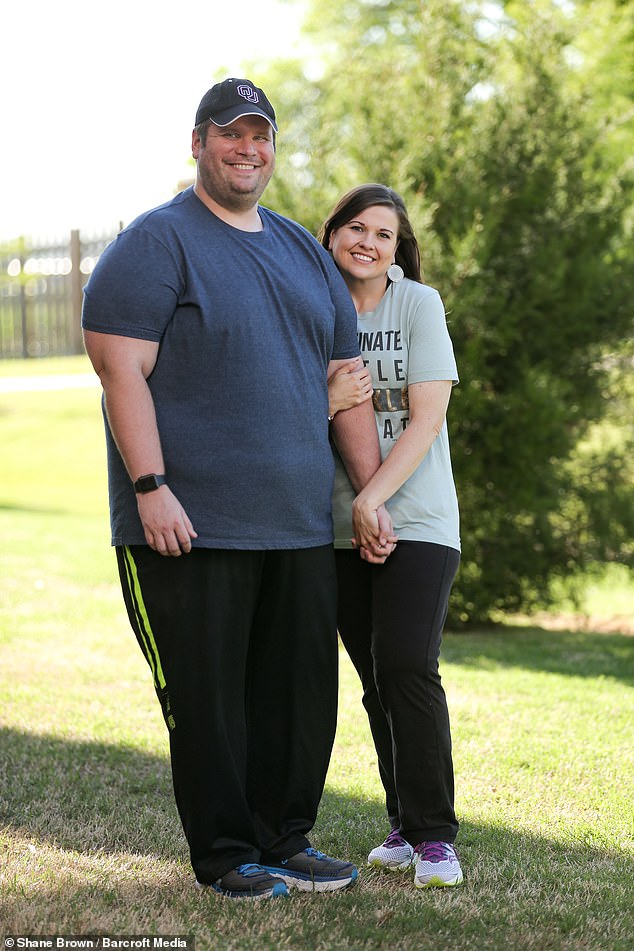 Catherine (pictured with her husband, Tim) has had to delay surgery to have her excess skin removed due to health complications

‘I was being held back from so many things and just the simple things like tying your own shoe, like being out of breath or going up stairs.’

Doctors repeatedly warned Catherine about her dangerously heavy weight but she only managed to lose small amounts before putting it back on again.

However, after one particular visit to the doctors Catherine had a breakthrough moment, where she realised she not only needed to lose weight but that she could do it.

‘And I remember getting into my car and realizing more than anything that I wanted this, I needed to do this. And I just prayed to God and asked him that he would give me the strength to be able to do this,’ she said. 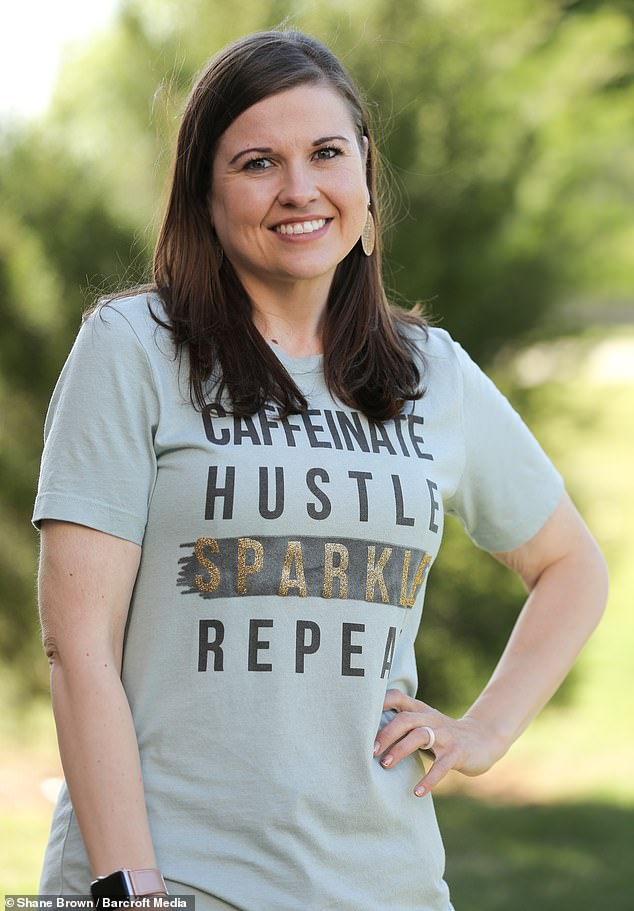 Sat in her car, Catherine wrote a list of all the reasons to lose the weight and stuck them around her house.

She added: ‘I could look at those and remind myself that it is worth it to keep working on myself.’

Out went the pizzas and fast food, replaced with fresh salads and vegetables she never used to have a taste for.

She said: ‘It was really just learning portion control and staying away from a lot of processed foods.

‘I learned there is flavor in vegetables, which are amazing.’

But with such dramatic weight loss, Catherine has had to deal with large amounts of excess skin that literally weigh her down.

Catherine’s new healthy lifestyle has been as much about exercise as adopting a healthier diet.

She joined a gym and started walking on trails before picking up the pace to running. 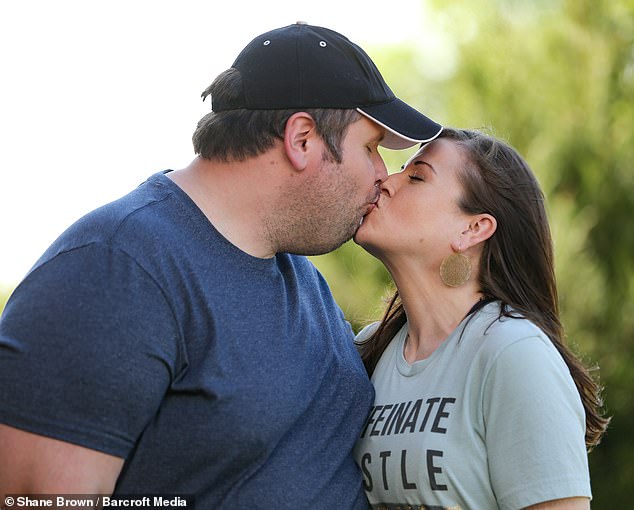 Catherine (pictured with her husband, Tim) who has 400 scar marks on her legs, hopes to have surgery to remove her excess skin next year

But her transformation has been overshadowed by being left with so much excess skin.

Catherine said: ‘When I started, I didn’t even think about the loose skin part of it.

‘I feel like I have a gravity force against me constantly pulling me forward. And even though you try not to let it get in your head, it affects you mentally, the way you look at yourself. You did all this hard work and then you look in the mirror and all you see is all this loose skin.’

‘I ended up having blood clots that were forming. And so it was just one of those things that for safety reasons there was no way to have the surgery,’ she said.

Faced with the devastating news that her surgery would be postponed until 2020, all Catherine had to show for her efforts was 400 scar marks on her legs.

She continued: ‘This was supposed to be my victory story of the loose skin being gone, but instead now I get to show off the scarring from something that was not supposed to happen.

‘I hope that next year that I am going to have that skin removal surgery.’ 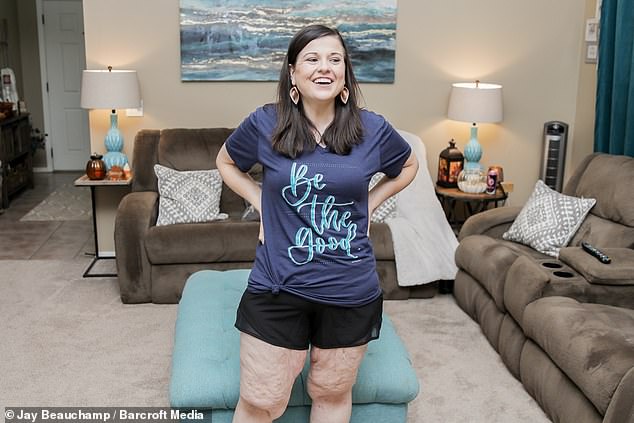 Catherine (pictured) believes she achieved her weightloss goal because each time she failed, she would start again

Catherine who set up a GoFundMe campaign while waiting to have her skin removal surgery, is optimistic because the delay has provided a longer window in which to fundraise.

She added: ‘What made me succeed is every time I failed, I got back up, dusted myself off and then I would start over again. And guess what, it could be the next day that I failed again. But I did the same thing. I got back up, and I kept trying.’

Encouraging others that they can also reach their weight loss goals, Catherine warned that results don’t happen overnight.

She said: ‘This isn’t about being the skinniest person or the strongest person. It’s about being healthy and being happy with who you are and filling that confidence. It doesn’t matter if you’re 400, 500 pounds just get out there, just start walking. It’s not going to happen overnight but you take those small steps.

‘There’s going to be days when you are going to fall flat on your face but when you get back up, every time you get back up it does make you stronger. And I guarantee you anyone can do this. They just have to want it. They have to find that fight.’ 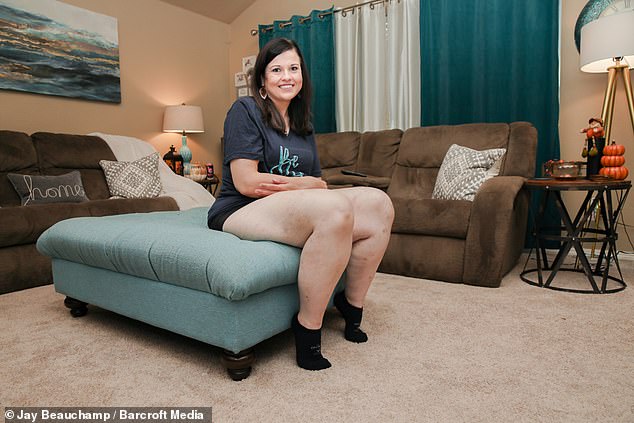 Catherine (pictured) believes anyone can achieve weight loss, but it takes finding that fight