Woman who sparked fury for climbing ancient Mayan temple in Mexico is a Mexican, 29

The woman who climbed the steps of an ancient Mayan temple, enraging a crowd, and going viral online, has been identified by a local news outlet as Abigail Villalobos, 29, of Mexico.

The Tinum municipal police department would not confirm or deny the woman’s identity to DailyMail.com.

The woman, identified as Villalobos by Noticias ZMG and Imagen TV, shocked visitors Sunday by walking up the steps of Castillo – or Pyramid of Kukulcán – in the Yucatán city of Tinum.

She then walked through one of the Chichen Itza temple’s four terraces at the front of the steps and walks back out while an enraged group of people shouted obscenities at her from down below as a security guard trekked up the pyramid to get her to walk down. 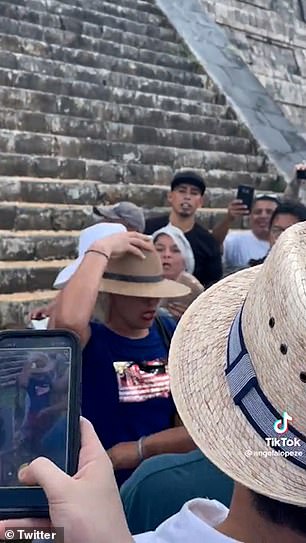 In the video, which has been viewed more than four million times, a tourist identified by Mexican media outlets as Abigail Villalobos appears to be asked to come down from the top of the temple by a man who has climbed some of the steps. At the bottom, the crowd gather round the 29-year-old and they can be seen shouting as she tries to get past

As she descended the 91 steps, Villalobos danced and appeared to pose for photos and was met by an angry crowd with some chanting ‘jail, jail, jail’ and ‘lock her up.’

Villalobos, who has been dubbed by locals as ‘Lady Chichen Itza,’ was then escorted by a guard while several of her companions trailed behind her before some of the upset visitors blocked her path. An elderly woman briefly stopped Villalobos and pulled her hair and while other tourists dosed her with water.

Villalobos was taken to the Tinum municipal police station and held for half an hour but was released after paying a fine of 5,000 pesos – about $257.

The pyramid was built between the 8th and 12th centuries AD and served as the temple of the Kukulcan god. The ancient ruin’s substructure is said to have been built a couple of centuries earlier for the same purpose.

The Mesoamerican pyramid is 79 feet high and an additional 20 feet for the temple at the top. Each of the temple’a four sides feature 91 steps.

The National Institute of Anthropology and History (INAH) issued a statement a few hours after the video was posted on social media, noting that the monument had not been damaged. 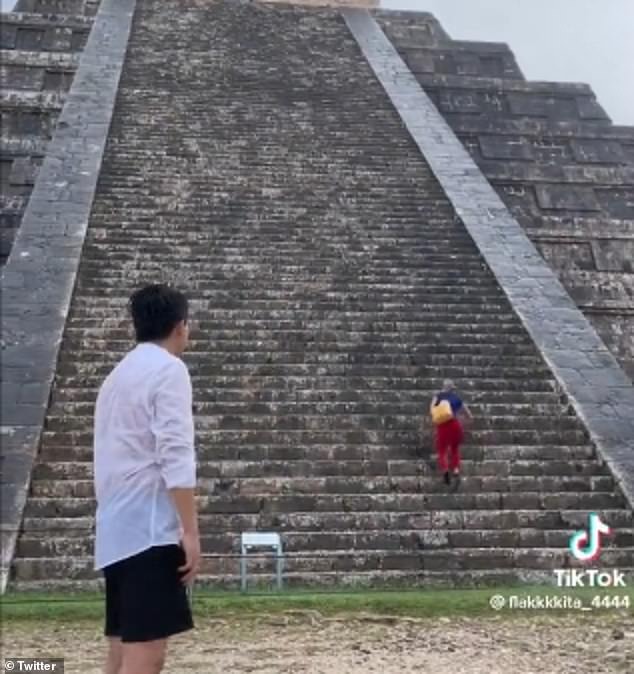 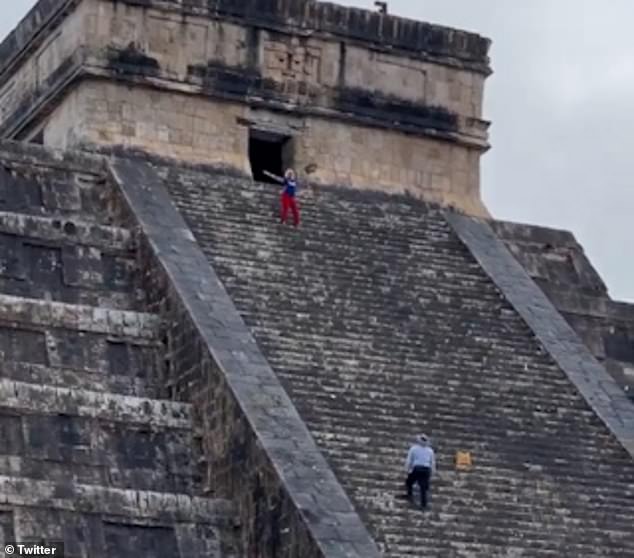 Ascending the 82-ft pyramid at the Chichen Itza archaeological site – formerly one of the most important centers of the Mayan civilization – has been prohibited since 2008.

Fines for climbing the temple can range from $2569 to $5138, depending on the damage caused to the structure.

Justin Bieber was kicked out of an archaeological site in Tulum Mexico for ‘pulling his underpants down and trying to climb one of its off-limits ruins’ in 2016.

Police were also called to the incident, after he stripped off for a selfie and then shouted abuse at security guards who tried to stop him. He was filmed arriving at the site with his then new girlfriend Hailey Baldwin.

Staff say he was clearly under the influence of alcohol and had been initially refused entry because he was carrying beer cans, said local reports. 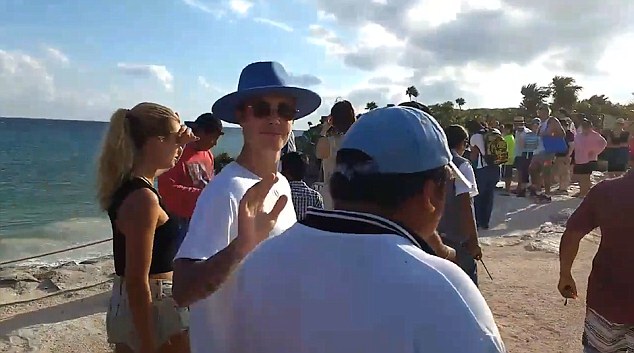 He waves at a camera and looks relaxed and happy as he walks into the site, where he later allegedly got into a fight with site staff after they tried to kick him out

Article 47 of the Federal law on Archaeological, Artistic and Historic Monuments states that a punishment of one to ten years in prison can be handed out if a person is found liable.

In January 2021 incident, a woman scaled the Pyramid of Kukulcán and sparked outrage when she was caught scattering the ashes of her late husband.

A stone tablet depicting the reign of a mysterious king in the early days of the Mayan empire has been discovered in ancient ruins in the jungle of Guatemala.

The 1,600-year-old tablet, known as a stela, is covered in hieroglyphic writing and dates from a time of great political upheaval in the central Maya area.

It was discovered at the site of El Achiotal, which dates to the 5th century AD and is about 12 miles (20km) east of the ruins of the Mayan royal palace of La Corona in Peten, Guatemala.

The sites are 40 miles south of the famous Mayan temples at Calakmul in Mexico.

The archaeologists have dated the stela to between 22AD and 418 AD. During this period many of the great cities of the Maya civilisation were abandoned.

It is a period when there was intense rivalry between two great metropolis of Tikal and and Calakmul.

Experts believe the tablet may be depicting the reign of a new king who was appointed by the Tikal after they came to dominate the area.