A woman who survived cancer twice — once during her childhood and once as an adult — and used to hide her scars in shame is now on a mission to show that it is possible to beat the disease and love their body after treatment.

Emilee Garfield, 42, of Santa Barbara, California, was born with embryonal rhabdomyosarcoma, a rare microscopic form of cancer of the connective tissue, but wasn’t diagnosed until she was four years old in 1980.

The professional health and wellness coach spent the following two years in the hospital undergoing radiation of her pelvis and chemotherapy treatments before she was declared cancer-free in 1982. 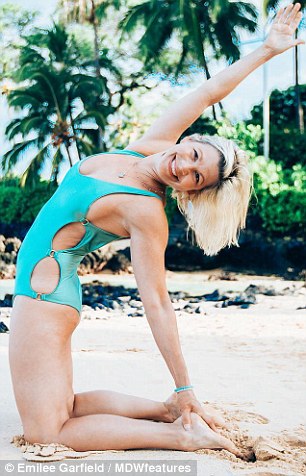 Disease: Emilee Garfield, 42, from California, has survived cancer twice — once during her childhood and once as an adult. She is pictured left with her ileostomy bag during treatment 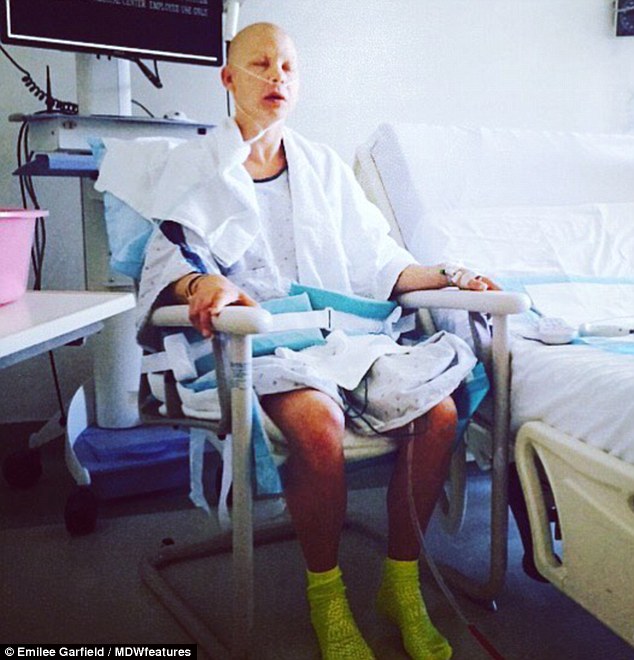 Hospital: Emilee was diagnosed with ovarian cancer in 2015 after surviving another form of cancer in her childhood. She is pictured during treatment

Emilee had to undergo a partial hysterectomy when she was 21 years old because she was at risk of having cervical cancer at the time.

While she was left unable to conceive following the procedure and her childhood cancer, she welcomed three children, Hayden, now 15, and twins Macie and Griffin, 12, via a surrogate after harvesting eggs from the one ovary that was not removed during surgery.

Throughout her adulthood, Emilee felt insecure about her scars and about her body body, which made her feel unlovable to others.

‘I had my first cancer at age four. I was a shy kid due to cancer and became very insecure. I grew up having a lot of shame around cancer, my body and all of my scars,’ she said.

‘I felt unlovable to others, especially men. I want to send a message to other young girls that cancer doesn’t define you: You are beautiful just the way you are. You are enough.

‘I hope to inspire young survivors, so they will discover the gift of their struggles. It may not seem like it at the time, but there is a greater purpose for all of this.

‘The most important thing I can share is that life is a gift. Please don’t take it for granted. I wasted so much of my life worrying about what others thought of me.

‘I tried so hard to impress others and be somebody I wasn’t. That only led me to feeling depressed and lonely. 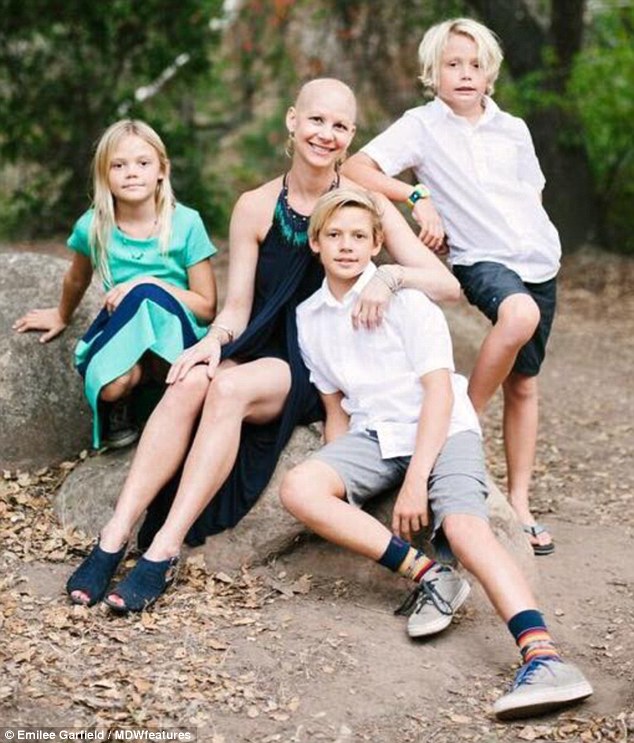 Family: While she was left unable to conceive, Emilee welcomed three children: Hayden, now 15, and twins Macie and Griffin, 12, via a surrogate 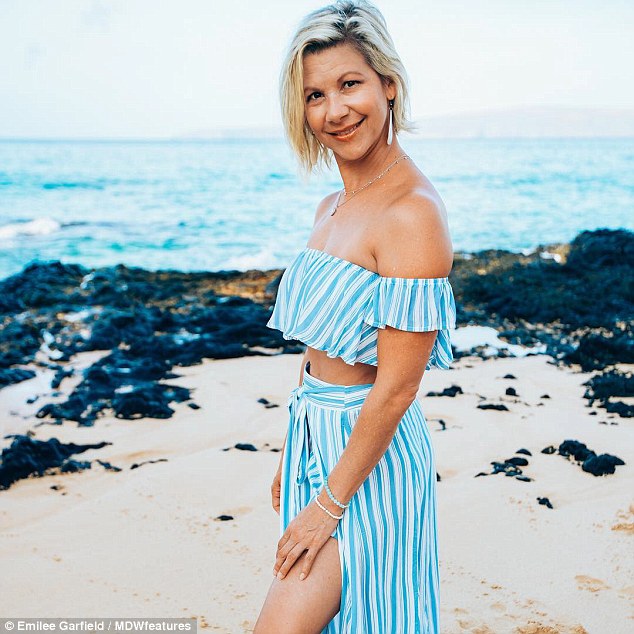 Recovery: Emilee (pictured after recovering from cancer a second time) was cleared of ovarian cancer after her final chemotherapy round in October 2015

‘Cancer can really mess with your mind and your emotions. I never was open about cancer until I was diagnosed for the second time at  39 years old old, in 2015.’

However, those symptoms were brushed off by doctors and it wasn’t until Emilee had a CAT scan and a transvaginal ultrasound in January 2015 that she was diagnosed with stage 3C ovarian cancer.

In February 2015, she began 19 chemotherapy treatments and had debulking surgery, a procedure during which doctors remove as much of the bulk (volume) of a tumor as possible.

She had three tumors; one on her outer sigmoid colon, one on her bladder and one on her rectum and vagina. Emilee was cleared of ovarian cancer after her final chemotherapy round in October 2015.

The wellness coach, who has taught yoga and Pilates for 18 years, has since made it her mission to be an advocate to other women who may be going through similar ordeals.

‘The worst part is that I had all of the signs and symptoms of ovarian cancer and I did reach out to doctors, but they didn’t take my abdominal pain, bloating and constipation seriously,’ she said.

‘Looking back now I can’t blame anyone. This is a hard cancer to detect, but more doctors, especially general practitioners, need to be educated on all of these signs and symptoms. 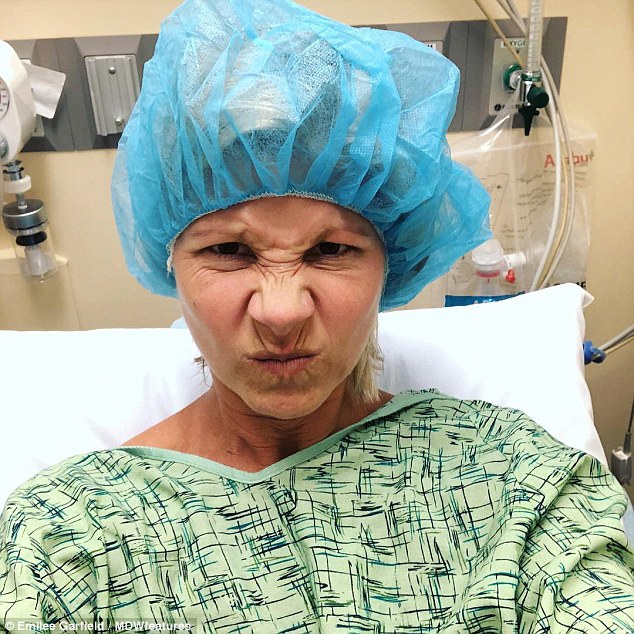 Help: The professional health and wellness coach (pictured in the hospital) has since made it her mission to be an advocate to other women who may be going through similar ordeals 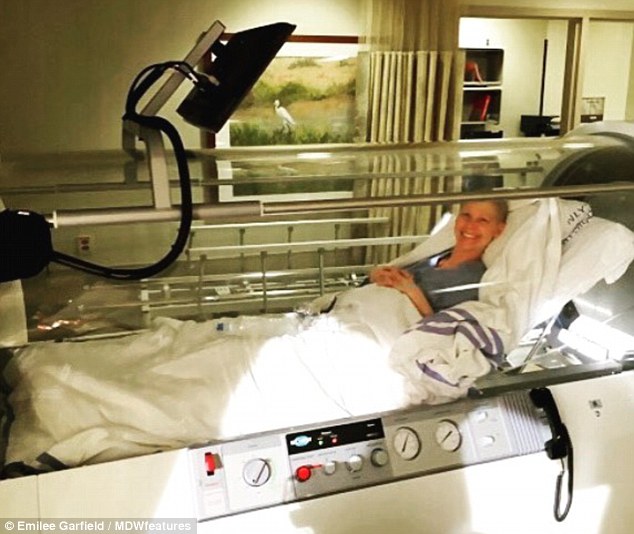 Process: Emilee (pictured during treatment for ovarian cancer) said it took her six weeks to accept the fact that she might die, and that she committed to creating happy memories 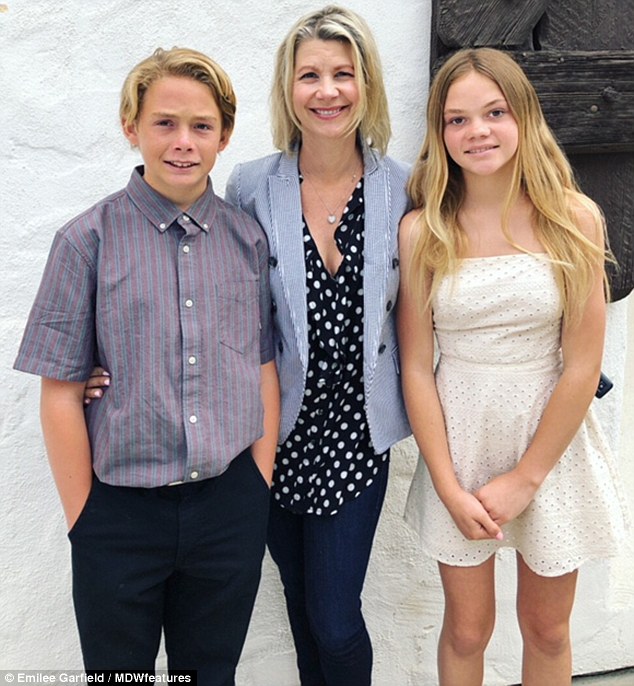 Mother: Emilee (pictured with her twins Macie and Griffin) said she didn’t want her children to feel sad and scared while she was battling cancer

‘Someone with all of these signs, such as bloating, constipation, fatigue, pelvic pain, changes in appetite, feeling full for more than two weeks, should see a doctor. Don’t panic if you have one of these symptoms. I had them all plus low back pain and ongoing urinary tract infections.

‘My doctor simply told me to drink more stool softener and the subject was dropped. In the meantime, my signs and symptoms were getting worse. This is when I knew something was wrong.

‘Three years went by. In the meantime, I had blood in my stool, experienced painful sex, had abnormal bleeding from my vagina, including bleeding during intercourse.

‘This was abnormal for me because I never had a period in my life due to radiation damage to my pelvis from having cancer at age four.

‘I had three small children and would focus on them and ignore myself and my pain. Life was busy and chaotic, so worrying about myself was the last thing on my mind.

‘When I would mention to anyone that I felt sick, and there was nothing physically wrong with me showing on the outside, people thought I was making stuff up and that I was a hypochondriac.

‘Sometimes I felt like I was always complaining, but I truly felt sick. That was the hardest part of it all. Ovarian cancer is known as the “silent killer”.

‘The signs and symptoms are all there — they whisper. It’s a hard cancer to detect until it has spread and metastasized, which is what happened to me. 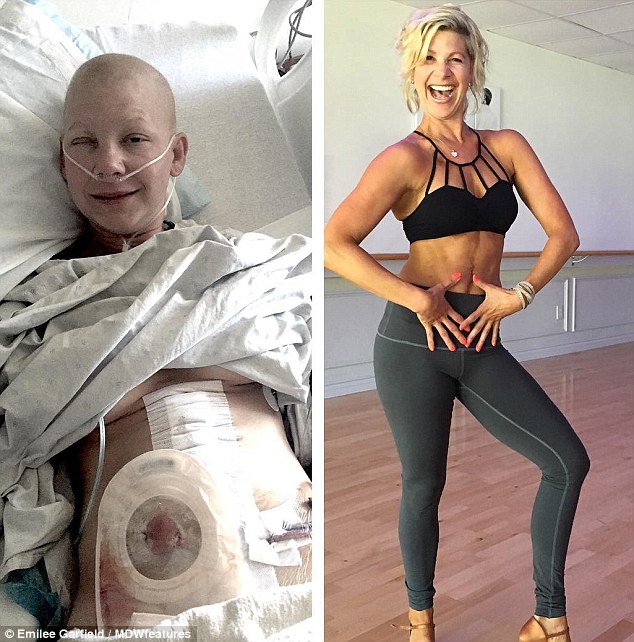 Transformation: ‘I credit myself for my journey back to peace, hope and joy. Why? Because I did all the hard work,’ Emilee (pictured left during the disease and right after) said 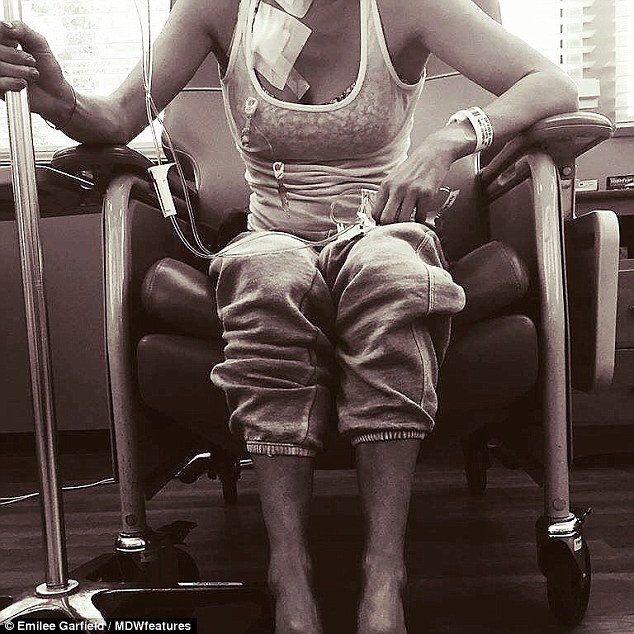 Signs: Emilee (pictured during treatment) started experiencing symptoms between 2010 and 2015, but they were initially brushed off by doctors and she wasn’t diagnosed until 2015 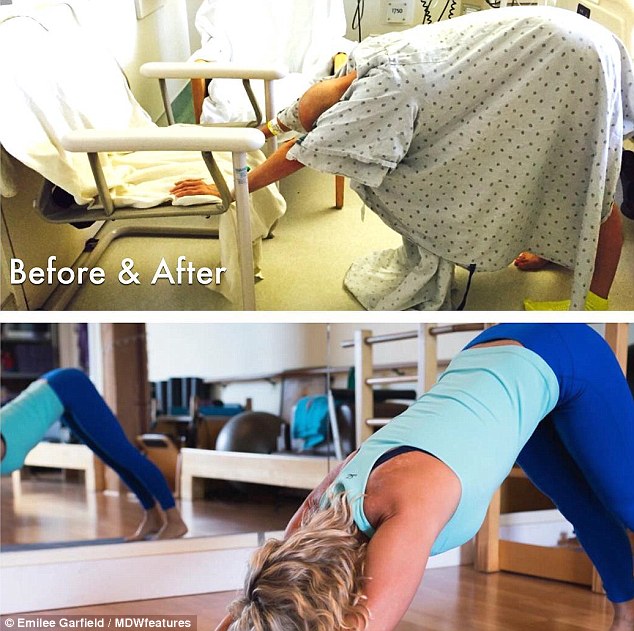 Changes: After learning that she had recovered from cancer once more, Emilee began sharing her journey on her Instagram account and has learnt how to love her body

‘My pain eventually got so bad that it put me on my back and still I had no answers. I continued to live in pain and thought I must be going crazy.

‘I had a full pelvic exam and pap smear — which doesn’t detect ovarian cancer. I had a colonoscopy, but it was negative because my tumors were on the outside of my colon, posterior vagina and on my bladder.

‘I had a CAT scan and it said I had an ovarian cyst, but my intuition said, “It is worse.” I had to push for a CAT scan and a transvaginal ultrasound, which eventually was the way they diagnosed my cancer.

‘Even the doctors were shocked. They could not imagine I had cancer.’

Ovarian cancer is the fifth deadliest cancer in women and mainly affects those who have been through menopause, usually over the age of 50. It is rare in women 40 and under.

After learning that she had recovered from cancer again, Emilee began sharing her journey on her Instagram account, @cancersavedmylife, and has learnt how to love her body.

‘In the past I was angry at cancer and always asked, “Why me?” Today that has changed, which is a complete transformation in my life,’ she said. 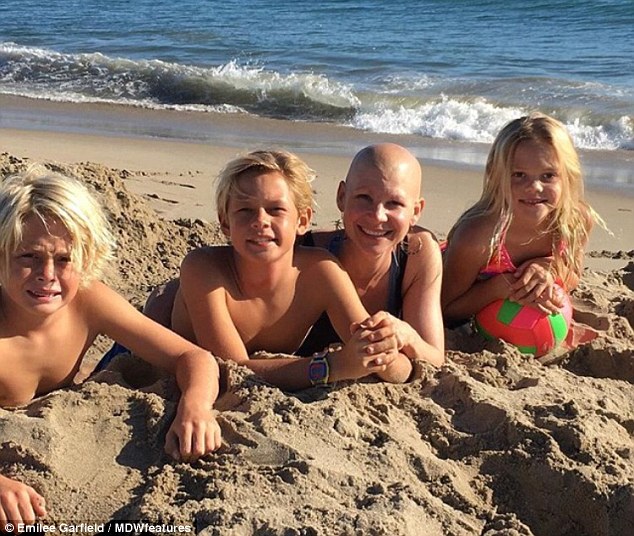 Experiences: Emilee decided that she wanted to created as many happy memories with her children as possible during her second cancer 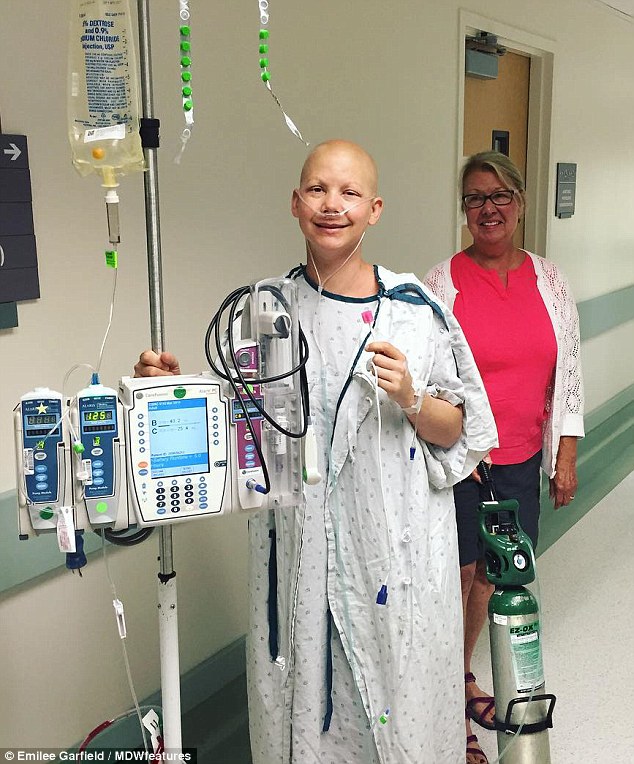 Advice: ‘I would tell someone in my shoes to never give up hope. I would recommend not reading the internet,’ Emilee (pictured during treatment for ovarian cancer) said 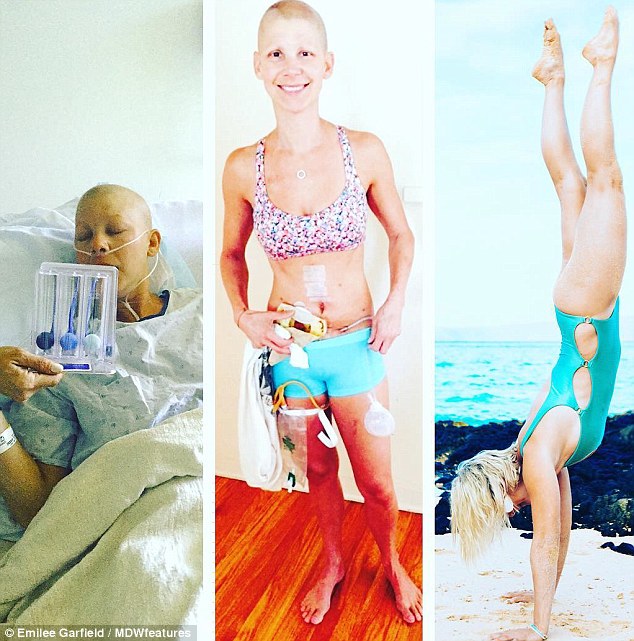 Journey: Emilee (pictured during the illness and during her transition to recovery) said keeping a positive attitude made her recovery easier

‘To me, that is the biggest accomplishment of my entire life. Surviving cancer wasn’t even as hard as all of the emotional pain I have been through. 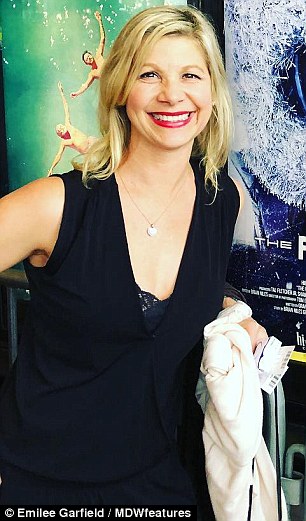 Plans: Emilee (pictured after her recovery) said she promised herself she would go to Hawaii after her last surgery, which she did

‘I am healing now and on a better path. I hope to inspire other young survivors like me. I hope to be a role model to those who also feel hopeless and feelings of low self-esteem.

‘In the end, it comes down to loving yourself for exactly who you are and where you are, without judgement. For me, that has been the hardest, loving myself.

‘I made my recovery journey easier by keeping a positive attitude. It took about six weeks for me to come to terms with the fact that I might die.

‘I credit myself for my journey back to peace, hope and joy. Why? Because I did all the hard work. Nobody told me how this journey was going to go.

‘I would tell someone in my shoes to never give up hope. I would recommend not reading the internet because the internet told me I had a low survival rate — 27 per cent, I read.

‘I say, visualize what you want your life to look like after cancer. Give yourself something to look forward to, like a vacation. I decided I would treat myself to Hawaii after my last surgery and I did.’