Woman with 2,500 personalities testifies in court on father’s ‘monstrous acts’

The father of the woman who developed 2,500 personalities after he repeatedly raped her as a child, smirked in court as she detailed his sickening abuse.

Richard Haynes, 74, pleaded guilty mid-trial in March to dozens of counts of rape, buggery and indecent assault committed against his daughter, Jennifer, in the 1970s and 1980s.

During an emotional testimony at Downing Centre District Court on Friday, Ms Haynes said she has waited decades to ‘smack’ her father in the mouth over his monstrous sexual abuse and she assumed 33 of her personalities to do so.

‘I’m not chickening out,’ the 49-year-old said through tears as she stared him down.

Ms Haynes, who has consented to be identified, was aged between four and 11 at the time.

As a result, she developed dissociative identity disorder – previously known as multiple personality disorder –  giving her thousands of different voices and opinions.

She looked across at her father – who smirked and stared down in the dock for the hearing – and declared: ‘Scum.’ 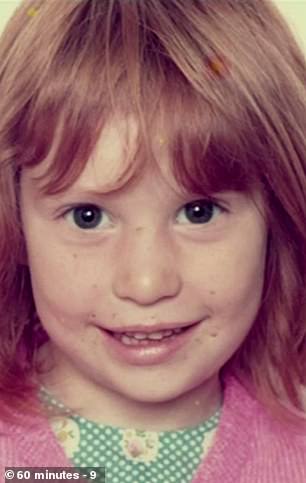 Jennifer Haynes (pictured left arriving in court on Friday) 49, came face to face with her father during his trial on Friday. The woman testified of the horrific abuse that led her to develop 2,500 personalities 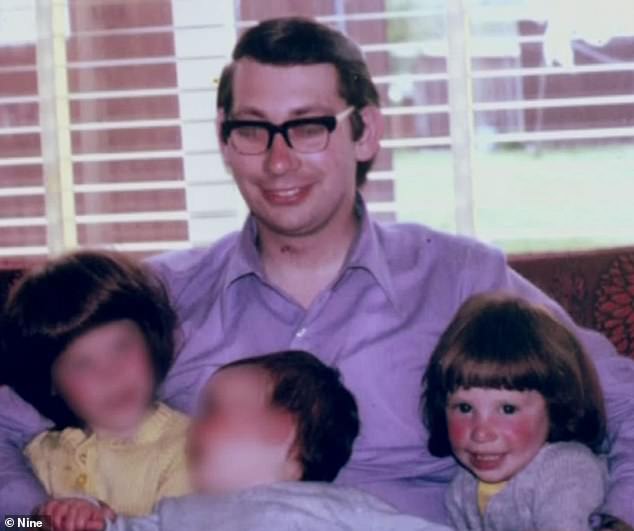 ‘He heard me beg him to stop, he heard me cry, he saw the pain, the terror he was inflicting upon me’, she said.

‘He saw the blood and the physical damage he caused and the next day he chose to do it all over again. My dad’s abuse was calculated and it was planned’.

Ms Haynes said her father made her feel valueless and less than human.

His abuse forced her to develop the multiple personalities as ‘the only way’ to cope, including four-year-old Symphony, who she embodied for some time in court while giving evidence.

‘All the other alters… have done their job so well and kept Jenny alive’, she said.

‘When Dad nearly killed us physically, Symphony removed the alter who was almost dead and replaced them with a fresh alter to keep going’.

Ms Haynes said there were insufficient words ‘to do justice to the enormity’ of the impact of his offending on her life.

Vile, extreme, sadistic, inescapable, unavoidable and overwhelming were some of the words she used to describe the abuse.

Outside court, Ms Haynes – who regularly wears outfits with bejewelled butterflies on them – said Symphony is ‘still in the chrysalis phase because we haven’t got justice yet’.

‘Symphony will get to be a butterfly at long last,’ she said.

Ms Haynes now has a colostomy bag, permanent issues with dentistry, vision and mental health, and fears bathrooms and toilets. 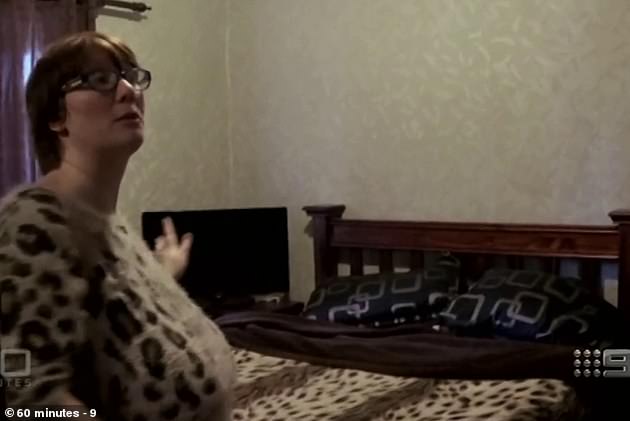 In another section of the footage, the 49-year-old shows police around her father’s bedroom. She breathes deeply to compose herself before saying: ‘And this is where he made me get on the end of the bed and I was raped by him.’ 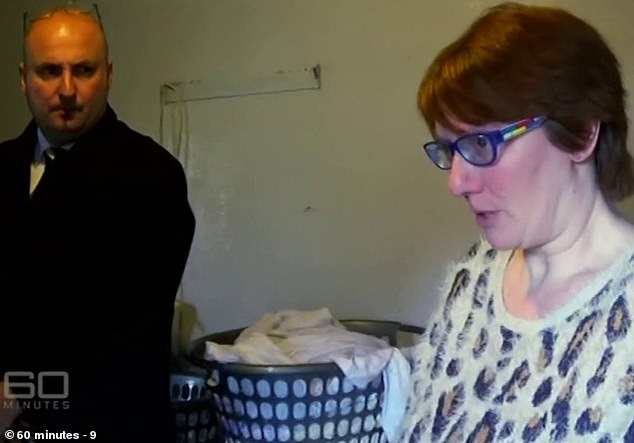 Finally, she takes officers the laundry room. She points to a washing machine and says: ‘The twin tub where he raped me endlessly’ 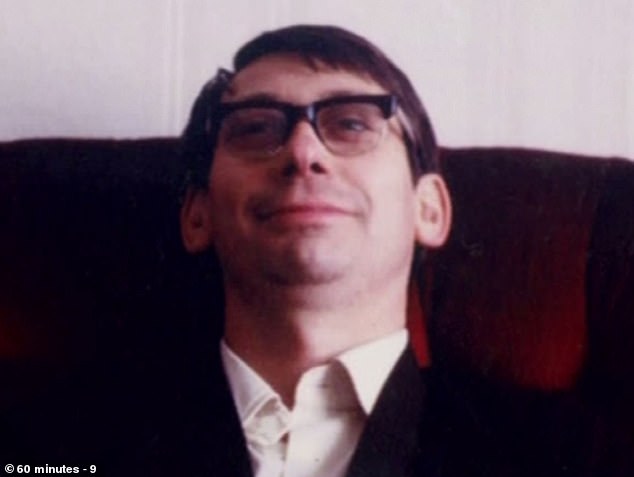 Jeni Haynes, 49, was horrifically raped by her father Richard (pictured) from the age of four to 14 at their home in Sydney’s western suburbs

‘My dad stole my glasses off my face every time he wanted to abuse me,’ she told the court.

‘He took away my eyes and held them hostage. Whenever I cannot see or my vision is impaired, I panic and am plunged into flashbacks.’

Haynes’ depraved rituals have made her fear birthdays, relationships, men, bathrooms and even enjoying food.

Her father told her that her mother would ‘spontaneously combust’ if she ever revealed the abuse.

‘He implied she would drop down dead,’ Ms Haynes said.

‘He expanded my concept of “telling” to include any kind of demonstration of pain, fear, terror or discomfort.’

Ms Haynes said she would never understand what a normal father-daughter relationship should look like or experience the joy of having a baby – and she’d probably always be alone.

‘Dad has destroyed my life,’ she said.

She howled and cried as she relived her nightmare to show officers where she was savagely tortured.

‘Oh my god, deep breath, you can do this,’ she told herself as she took officers into her father’s old workroom. 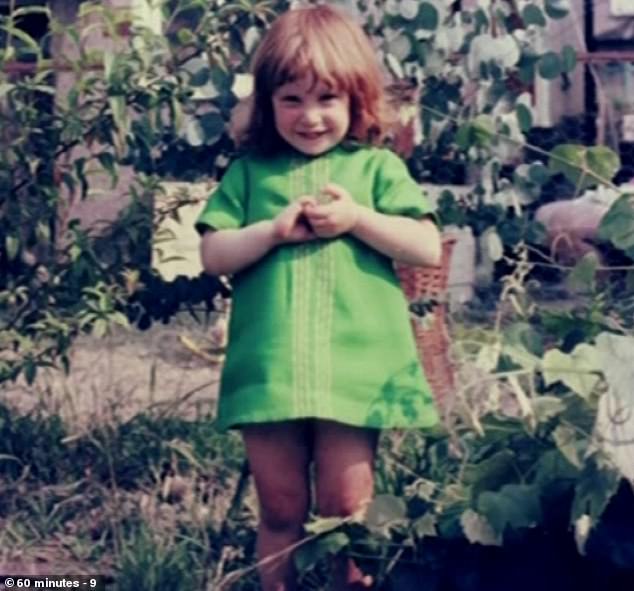 The personalities include a four-year-old girl called Symphony, the personality abused by her father, and an eight-year-old boy named Little Ricky. Pictured: Ms Haynes 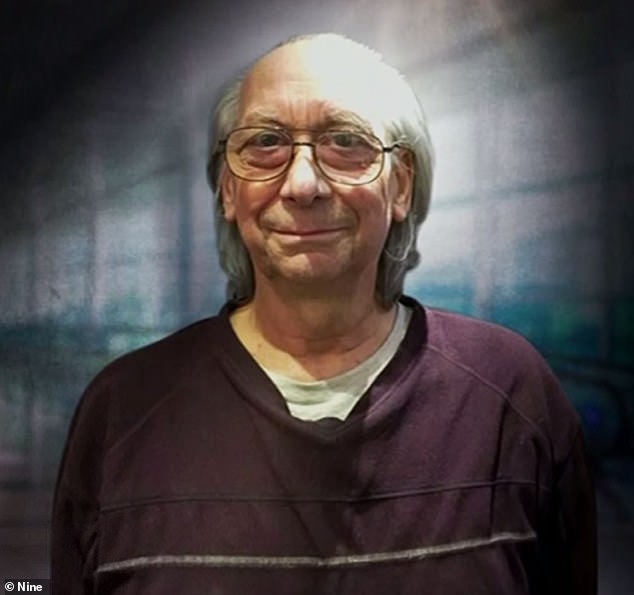 Richard Haynes, 74, (pictured) pleaded guilty to the 25 counts of rape, buggery and indecent assault at their Sydney home in the 1970s and 1980s

‘Okay… it’s the same,’ she said, pointing to a wooden bench where she was abused.

‘The bench?’ a detective asked.

‘The bench is the same,’ said Ms Haynes.

In another section of the footage, the 49-year-old showed police around her father’s bedroom.

She breathed deeply to compose herself before saying: ‘And this is where he made me get on the end of the bed and I was raped by him.’

Ms Haynes then took officers into a small shed at the property. She scanned her eyes around the room and said: ‘This is possibly one of the most terrifying rooms in the universe.’

Finally, she took the police the laundry room. She pointed to a washing machine and said: ‘The twin tub where he raped me endlessly.’

The footage was taken by officers during their investigation before charging Haynes.

Ms Haynes, who gave police a 900,000 word statement recounting her abuse, had multiple surgeries to reconstruct her coccyx, bowels and anus after the brutal assaults.

She developed her personalities to protect her while she was abused – and she can summon them upon request.

Ms Haynes created a girl called Symphony when she was four – and this was the personality she would take on when she was raped.

Other personalities include an eight-year-old boy named Little Ricky and a teenager named Muscles.

‘My dad inflicted severe, sadistic, violent abuse that was completely unavoidable, inescapable and life threatening – and he chose to do this every day of my entire childhood,’ Ms Haynes said. 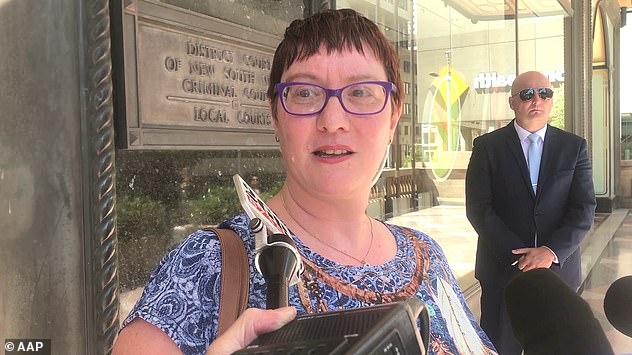 Jeni Haynes expressed her relief to reporters when she left a Sydney court after her father Richard pleaded guilty to 25 counts of rape, buggery and indecent assault in February

Richard Haynes was extradited from the United Kingdom in February 2017 to face a judge-only trial after being charged for the decade of abuse.

The allegations were so serious it was feared a jury could be left psychologically traumatised.

A a child victim of sex abuse, Ms Haynes was given the chance to remain anonymous during court proceedings.

But if she did so her father would also have remained anonymous, so Ms Haynes made the brave choice to take the story public.

She said she wanted her father to go to jail with ‘everyone knowing what he did’.

As they prepared for trial, Ms Haynes agreed with her legal team how she would present her personalities during her testimony.

When she was asked a question, the character who knew the answer would ‘come out and say it.’

Ms Haynes testified in the personality of Symphony for two hours before Haynes changed his plea and stopped the trial.

She believes this is because he did not want the world to hear her full testimony, to hear what he had done to her.

In the 60 Minutes interview, Ms Haynes admitted she never realised having multiple voices inside her head was considered abnormal.

‘Jeni was born and my father started to abuse her. An alter was created who came to take dad’s abuse so Jenny didn’t have to,’ Ms Haynes previously said.