A fashion retail supervisor with ‘painful’ 34HH boobs claims a female doctor told her not to get a reduction – because other women ‘have paid thousands to have lovely breasts like yours’.

Victoria Gilbert, from Brentford, West London, said she went to visit her GP for a check-up in March 2020 and described how her 8lb breasts cause chronic back pain and red welts on her skin.

The 28-year-old was flabbergasted when the doctor reportedly told her not to have a breast reduction because they’re ‘lovely’ and that many women would pay for a bigger bust like hers.

Stunned Victoria has made repeated visits to other GPs about reduction surgery over the last 10 years and said she was simply advised to lose weight, and when she did so was eventually offered physio.

Victoria Gilbert, 28, from Brentford, West London, suffers with chronic back pain from her size 34HH breasts and wants to get a breast reduction operation

But even when 5ft 4 Victoria managed to lose two-and-a-half stone in 2016 she went up a cup size – making her reconsider whether she would have kids in future for fear her breasts will continue to grow.

Determined to live a happy, fulfilling life Victoria is planning to get the operation done privately in the UK but needs to raise £6,500 for the private procedure.

Victoria said: ‘I’d made a comment along the lines of “I don’t like my boobs, they’re just a bit too big” and that’s when she looked at me and she said “but they’re lovely, people would pay thousands [for them]”.

‘I know women that have paid thousands to have breasts like yours. Don’t get a reduction, they’re lovely.

‘There’s a tone in women’s voices where it’s like “oh I’m just trying to make you feel better” but it wasn’t that. 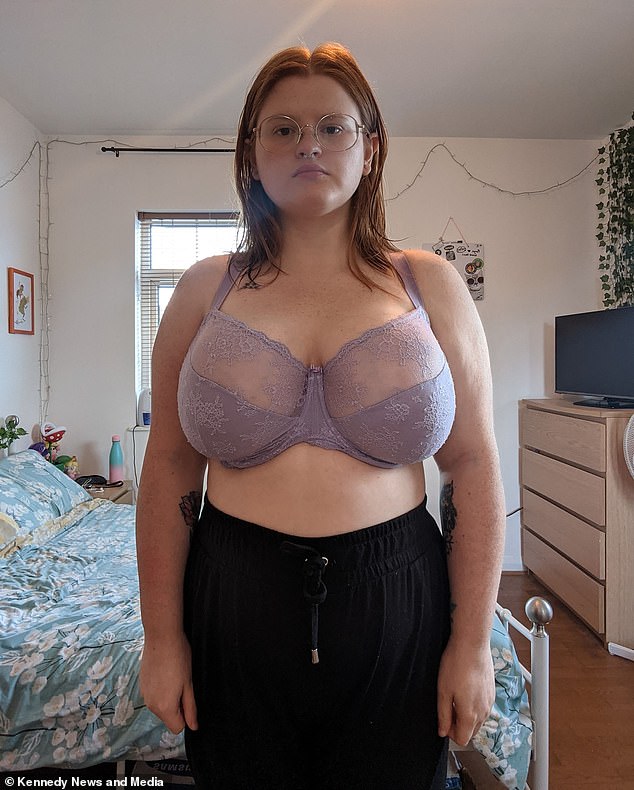 She first approached her GP at the age of 18, then a size double-F, to see if she could get a reduction on the NHS – but has been suffering with breast-related issues since puberty 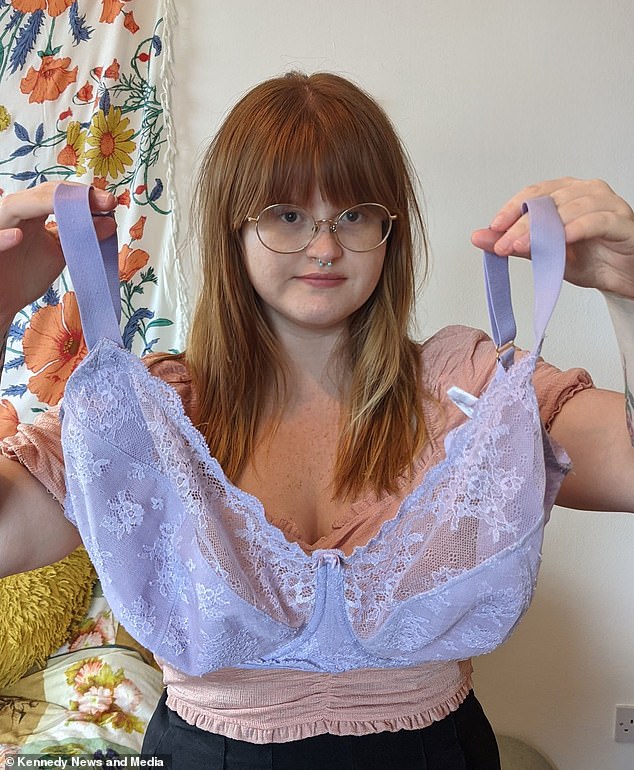 The  retail supervisor has now set up a Go Fund Me to raise the £6,500 needed to pay for the private procedure as it is not covered on the NHS and she was offered physiotherapy instead

‘It was very serious, almost like she was disappointed that I was thinking of making them smaller.

‘I was just shocked it was a woman and a professional saying it to me and didn’t say anything.

‘It’s something I’d expect from a man but not a woman and I think if it was a man I would have given him some hell.

‘I was so surprised it was a woman and a professional saying it to me. I think it took me until I got home to realise what had been said to me.

‘I felt really, really angry and hurt. It made me think ‘how am I going to get this breast reduction if the person that I need to go to to help me get it done doesn’t believe I should have one?’.’

Victoria, who lives with social media marketing partner Oscar Stockdale, 25, approached her GP 10 years ago to see if she could get a reduction on the NHS – but has been suffering with breast-related issues since puberty.

Not only did she have to face the physical pain but also the emotional turmoil from cruel kids who teased her. 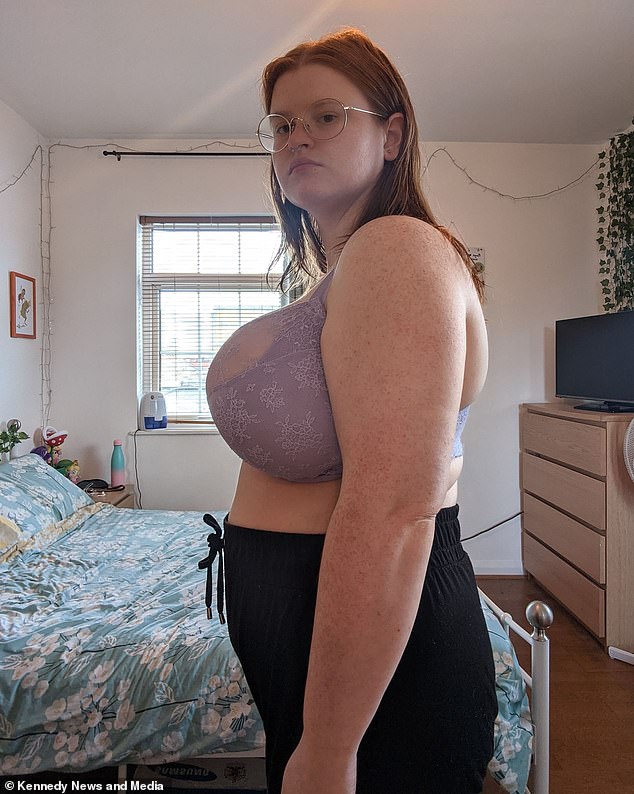 However, she was left shocked at a check-up in March 2020 when a female doctor told her not to reduce her breasts as they’re ‘lovely’

Victoria claims that the doctor went on to say that many women would pay ‘thousands’ for a bigger bust like hers. Pictured: The red welts on her skin from her bra (left) and bra strap (right)

Victoria said: ‘When I was a kid I was so excited to get breasts. I thought “yay I’m going to have boobs and be pretty and cool” and then they were bigger than everyone else’s.

‘I was a double-D at 14. I remember thinking “this is a bit big but maybe they’ll stop”.

‘The first time I got upset about it I went to measure for a new bra at the age of 14 and I was an E.

‘I just started crying there and then with my mum in the changing room, I remember thinking ‘this seems like it’s not stopping, why are they still growing?’.

‘At school I remember mostly girls being mean. Girls would shame and bully me and boys would harass me online for pictures.

‘Due to this I suffer with body dysmorphia, I look at myself and see a monster.

‘I refused to do dance and PE, which was quite sad because I used to love dance as a kid.

‘I felt very self-conscious and very embarrassed. I just felt gross, I never had a bra that kept me in properly. 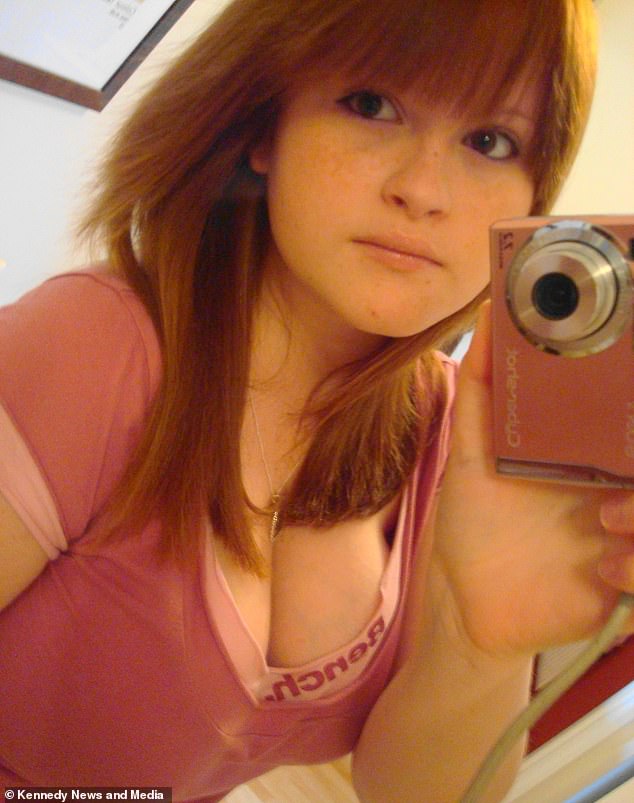 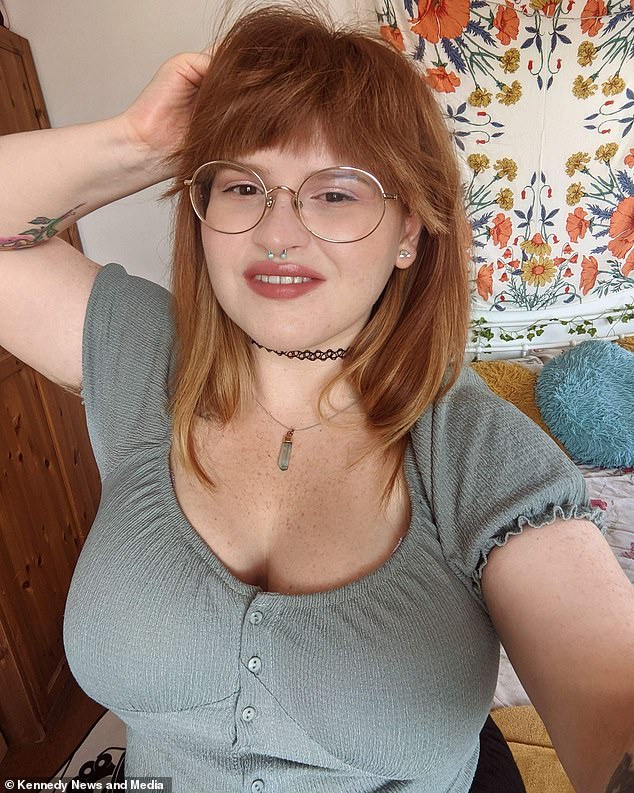 ‘If they were bouncing around I would feel that everybody was staring at me.

‘I didn’t feel comfortable with it and I got to the point where I said ‘I’m no longer doing PE and dance classes and there’s nothing you can do’.

‘My mum had to come into school with me and talk things out. In the end I was allowed to catch up with English and maths instead of doing PE and dance.

‘Working in retail the back pain was the worst. I found it hard to be one my feet for longer than two hours.

‘I was able to over time build up stamina but eventually I got a bit better and I could stand a bit longer.

‘I once pulled my lower back and it was really bad. Every time I bent over it was such a sharp pain.

‘I went to the doctor and said that I thought my lower back was killing me due to bad posture because of my boobs’.’ 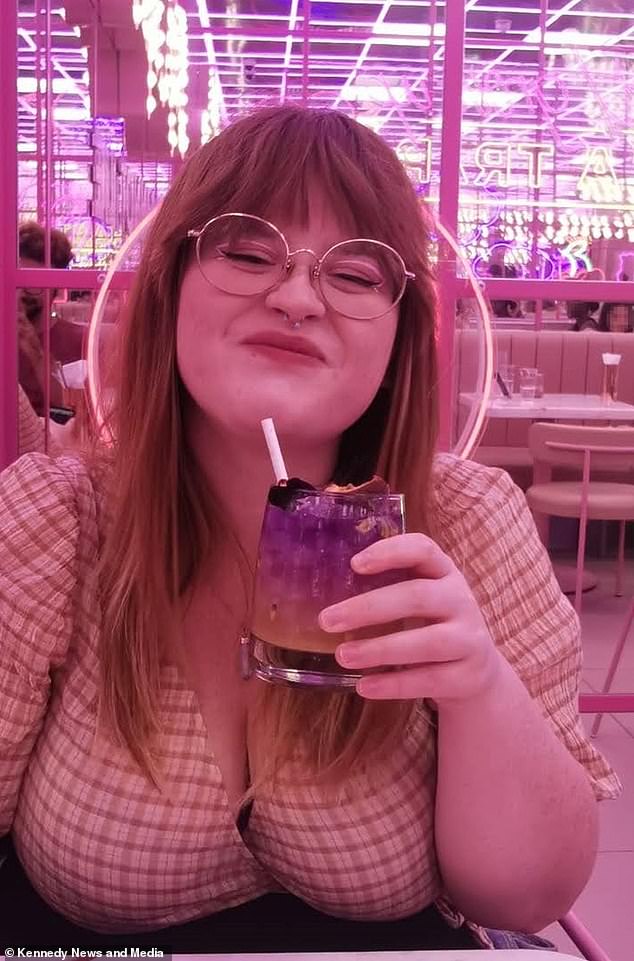 When Victoria was told to loose weight to reduce the size of her bust, she dropped two-and-a-half stone but bizarrely went up to a double-G cup size and says they ‘just keep growing’

Victoria, then a size double-F, first went to her GP in 2011 at the age of 18 to make enquiries about a reduction op but claims she was simply told she needed to lose weight.

Five years later Victoria dropped two-and-a-half stone and was told that she could have physio – one of the first steps on her breast reduction journey – but bizarrely went up to a double-G cup size.

The back-strengthening exercises Victoria did in physiotherapy didn’t help, and she claims after a few months the physiotherapist conceded that she needed the operation.

Victoria said: ‘The first time I went to a GP they told me to just lose weight, it felt like a hurtful brush-off.

‘The second time I went I was 23, at this point I’d lost quite a bit of weight. 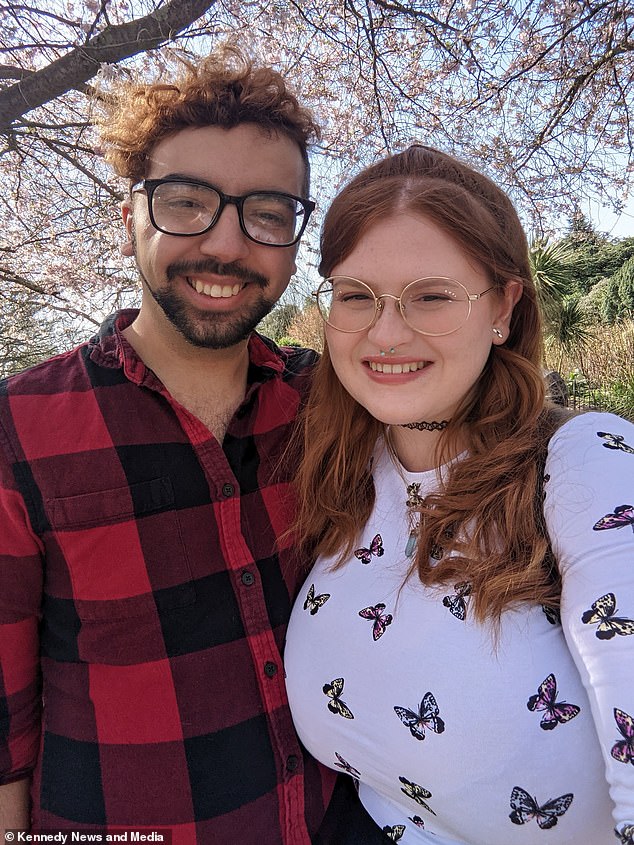 She lives with social media marketing boyfriend Oscar Stockdale, 25, (pictured together) who she says loves her body but is fully supporting her in her decision to get a breast reduction

Can you get breast reduction surgery on the NHS? Size of a woman’s breasts, their weight, their age, whether they smoke, will be considered before surgery is offered

Breast reduction surgery is done to reduce the size and weight of a woman’s breasts, and involves removing fat, tissue and skin from the chest.

Genes, hormones and body shape and size may determine how large a woman’s breasts are – usually they are in proportion to the rest of the body but some women’s may be exceptionally large.

The NHS will not usually do a breast reduction for cosmetic reasons.

However, it may be considered if a women is experiencing effects like backache, neck or shoulder pain, rashes or skin infections beneath the breasts, or psychological distress.

The NHS may also consider the size of a woman’s breasts, their weight, their age, whether they smoke, and whether other solutions have been tried.

And local funding availability also plays a role – different NHS boards around the country have different criteria so women living in some areas may be more able to get the surgery than those in others.

‘I was told I was within the bracket and I would have to do physio and get her breasts checked every couple of months to record what size I was.

‘I did the physio for a few months but by the end the physiotherapist said it seemed like I needed the breast reduction.

‘It’s so frustrating that even losing weight didn’t change my boobs. The time I lost weight they went up a cup size, they do seem to just keep growing.

‘I’m not even sure I want children because my boobs are just going to get bigger.’

After 14 years of hating how her boobs look and feel, Victoria, who is forced to squeeze into size 18 tops, has decided to take matters into her own hands and is fundraising to get surgery done privately.

Victoria said: ‘After 14 years of crying, aching and hating myself I now believe my best option is to seek private health care.

‘I didn’t even think of fundraising for it myself, it was a friend who suggested it. I find it very hard asking for help but after a few months that suggestion was rattling around in my brain.

‘Between that and what that female doctor said to me I just thought ‘maybe I should just give it a go and see what happens’.

‘It would be a life-changing operation for me, I look at them and I’m grossed out by them.

‘It will feel like I can just do all sorts of things and not worry about my boobs getting in the way.

‘My back won’t hurt from doing something for too long and I’ll just be able to look at myself in the mirror and like how I look.

‘Oscar is wonderful, he said if he had the money he would just pay for it in one go. He loves my body as it is but he also completely gets it. 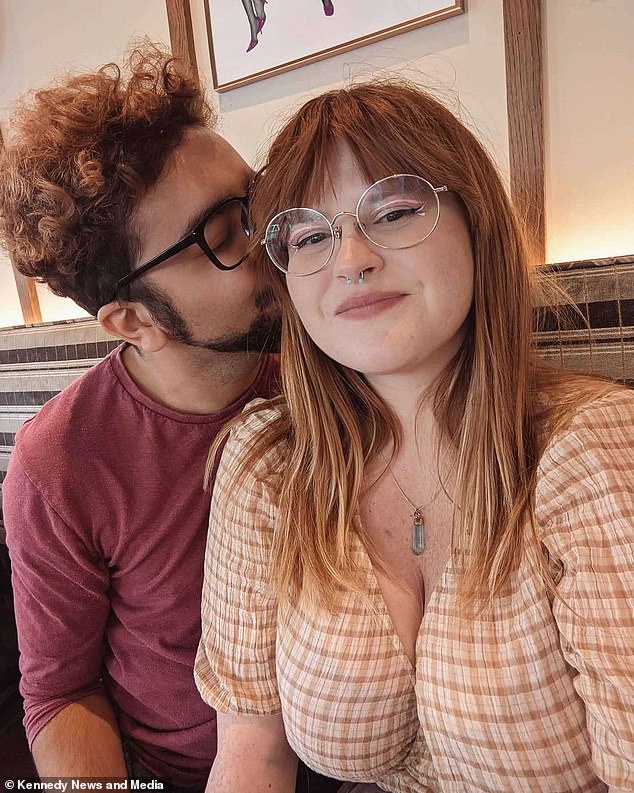 A spokesperson for the NW London CCGs in relation to the doctor’s recent alleged comment regarding Victoria’s breasts, said: ‘Neither the CCG or the practice have had direct correspondence from Ms Gilbert on this matter. The practice would welcome the opportunity to hear and respond to Ms Gilbert’s concerns directly.

‘We expect all our GPs to practise in accordance with the GMC guide on Good Medical Practice for example, adequately assessing a patient’s condition, treating them as individuals and respecting their dignity.’

A spokesperson for NHS Dorset CCG in relation to Victoria’s claims of a decade of repeat visits to doctors regarding breast reductions, said: ‘We’re sorry to hear of this experience and would urge anyone who is unhappy with services they receive to contact us directly to discuss the issue.

‘Treatments and surgeries of these kinds are handled on a case by case basis set against key criteria which is outlined in our policies.

‘We are always more than happy to listen to concerns and take action if required.’