Sue Atkinson was savagely beaten to death by her neighbour, who was in the grip of paranoid psychosis

A paranoid woman with bipolar disorder beat her neighbour to death in her own garden and left her body lying beneath a stone bird bath, a court has heard.

Sherry Moore attacked 64-year-old grandmother Sue Atkinson with a metal pole because she believed she was under threat from people who were ‘out to get her’, prosecutors say

Moore, from Hull, had reportedly been admitted to psychiatric hospital at least 12 times, but was not taking medication at the time of the attack.

The 55-year-old pleaded guilty to manslaughter on the grounds of diminished responsibility in March. A judge today postponed her sentencing.

A psychiatrist has recommended that Moore be subjected to a hospital order with a restriction meaning she cannot be released without the approval of the secretary of state.

Prosecutor Patrick Palmer said victim Mrs Atkinson, a retired nursery nurse, had told a friend she had seen ‘increasingly bizarre behaviour’ from her next-door neighbour, who she described as ‘very strange’.

On October 20 last year, she had been volunteering for Hull City of Culture events during the day and arranged to meet a friend that night but did not turn up. She was found in her garden the next day by a friend. 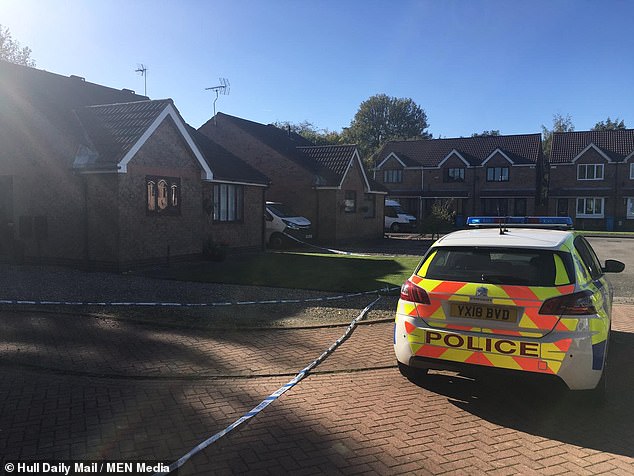 1993 – Moore was admitted to hospital after she stabbed her two-year-old son with a kitchen knife.

May 2014 – Admitted again after she smashed a bottle over her friend’s head.

October 2014 – She entered a child’s bedroom in a stranger’s house and put a necklace around the neck of the child.

January 2016 – She tried to run over a police officer before barricading herself in the car.

Prosecutor Mr Palmer said: ‘She saw the deceased lying in the garden with a bird bath on top of her.’

A post-mortem examination found that Mrs Atkinson died as a result of blunt force trauma and suffered more than 100 injuries to her head, neck and chest.

Police were called and found Moore sitting on her sofa in her own home.

Mr Palmer said she initially blamed her brother for the attack but later told police: ‘I’m a bad person, I killed a lady, I need to be in prison. She was my next-door neighbour, I’m an evil person.’

He said she added: ‘I pushed something heavy, it fell on her, I didn’t think it would make her die.’

The barrister said Moore was exhibiting symptoms of psychosis at the time of her arrest.

He said: ‘She had consistently reported that she believed she was under threat and unknown people were out to get her. She clearly was not acting rationally.

‘She was suffering from an abnormality of mental function, on the balance of probabilities she acted on her paranoid beliefs.’ 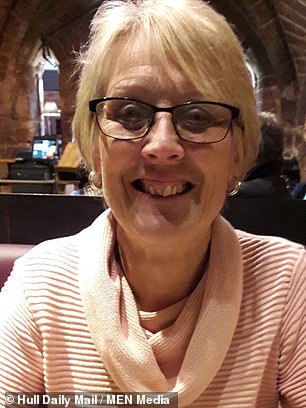 Mrs Atkinson was found dead in her garden

She was diagnosed with bipolar affective disorder in 2009 but said she would stop taking her medication when she felt well.

Judge Paul Watson QC, the Recorder of Hull, said he was considering imposing a jail term, with a direction to initially send the defendant to hospital for treatment, and adjourned sentencing until June 6 at Sheffield Crown Court.

Speaking after the hearing, a friend of Mrs Atkinson said she was shocked to hear about Moore’s medical history.

She said: ‘Whoever let her out of hospital should be ashamed of themselves. We have all lost a really lovely friend.’