Woman with cancer organised her wedding inside a bubble

A bride-to-be who was diagnosed with cancer just three days after getting engaged organised her entire wedding while inside an isolation bubble.

Mother-of-two Katie Welsh, now 33, collapsed days after her boyfriend Dan Slawycz popped the question while on a romantic weekend away in February 2016.

After being rushed to hospital, Ms Welsh, from Manchester, was diagnosed with acute lymphoblastic leukemia and told the tumour, which was pressing on her windpipe, would have killed her if left any longer.

While undergoing grueling chemotherapy, which caused Ms Welsh to lose her hair and 1.5 stone, she was kept in a sterile isolation unit for six weeks and only saw her children a handful of times.

Although battling a life-threatening illness, Ms Welsh stayed positive by planning her May wedding, saying: ‘It kept me going thinking about it and kept me occupied. Planning the wedding gave me something to look forward to.’

Despite falling ill just five days before the ceremony, the wedding went ahead, with Ms Welsh now in recovery and well enough to return to work.

Katie Welsh, who was diagnosed with cancer just three days after getting engaged, organised her entire wedding while inside an isolation bubble (pictured with her husband Dan Slawycz) 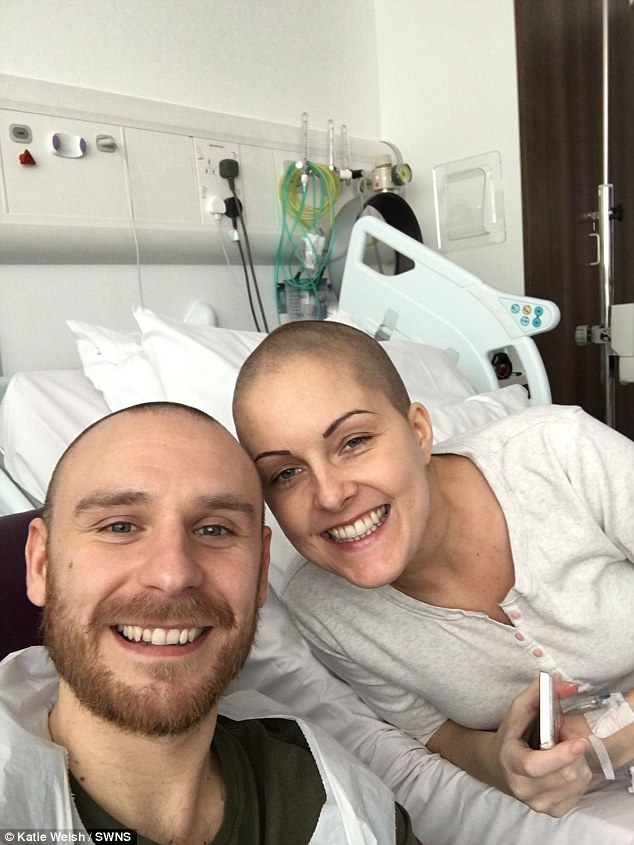 Grueling chemotherapy caused the mother-of-two to lose her hair, resulting in her arranging for a wig to be shipped from the US and two dresses due to her dramatic 1.5 stone weight loss 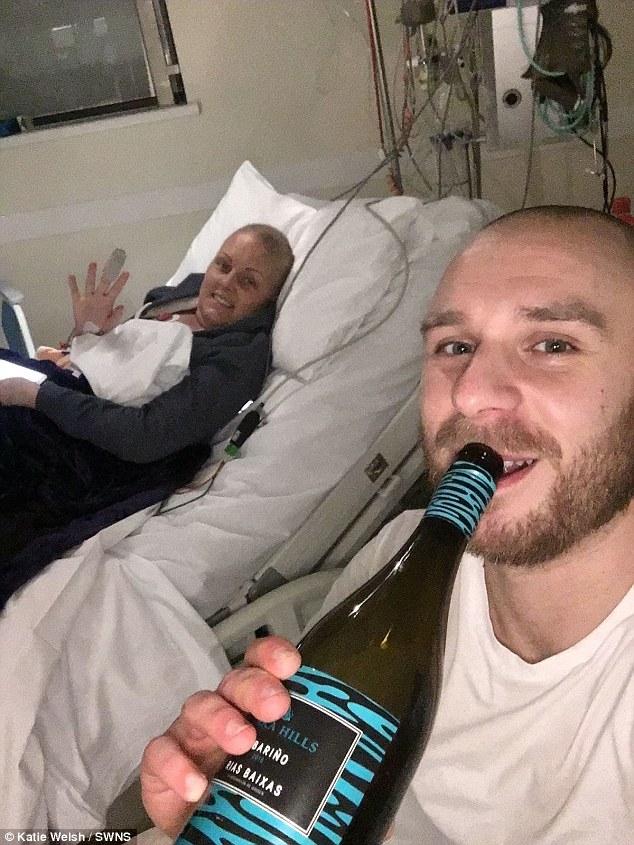 ‘I did all my planning from the isolation unit’

Ms Welsh said: ‘I did all my planning from the isolation unit using an iPad.

‘I think a lot of my friends thought I was marrying Dan because I thought I was dying, but that wasn’t it; neither of us knew I was ill when he popped the question.’

Browsing the internet when she could not sleep, Ms Welsh treated herself to a glittery pair of Jimmy Choo stilettos, as well as arranging for a real-hair wig to be shipped from the US and organising her bridesmaids’ outfits.

She said: ‘I had a sparkly white beaded dress but when I got home and tried it on it was so heavy I knew I couldn’t wear it.

‘I had to order a second one; it had a big lacy skirt and a lot of people said I looked like Sarah Jessica Parker in Sex and The City.

‘I’d been 9.5 stone before and my weight dropped to eight stone.’

Ms Welsh also recruited her future brother-in-law to be in charge of photography. 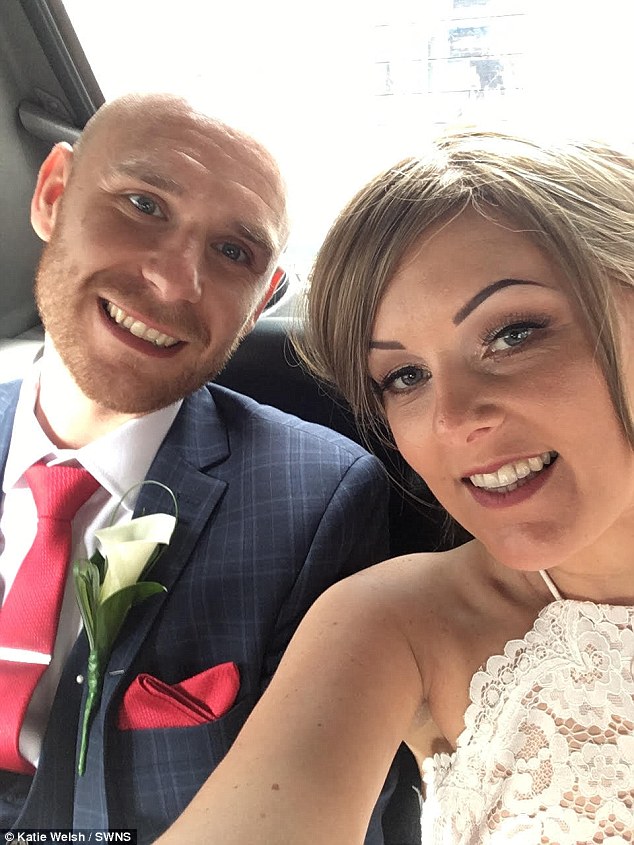 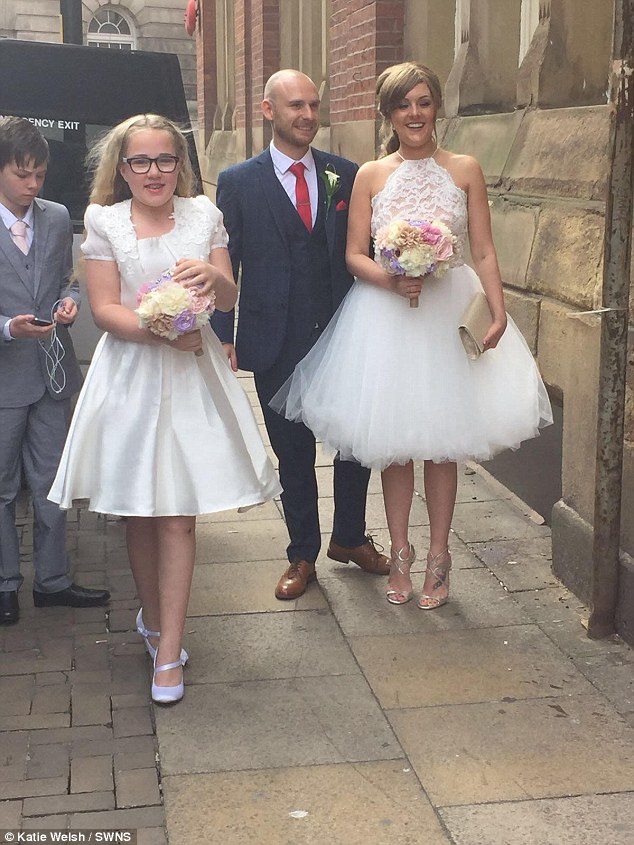 Planning the big day while she could not sleep, Ms Welsh felt it gave her something to focus on

Fiancé stayed with her every night

While Ms Welsh recovered, Mr Slawycz camped out in the hospital every night, watching endless films and television series with his fiancé, despite her being so tired she could barely stay awake.

Every time he entered the isolation unit he was forced to vigorously scrub his hands with antibacterial soap, as well as wear as special pinafore.

Ms Welsh’s parents looked after her children, who were vaguely aware their mother was ill.

She tried to communicate with them solely through FaceTime to hide the extent of her hair loss.

Ms Welsh was also heartbroken to be separated from her Jackahuahua dog, Diego, during her chemotherapy.

‘I managed to forget about everything for a second’

Although Ms Welsh appeared to be well enough to go ahead with the wedding, she took a dramatic turn for the worse less than a week before the big day.

She said: ‘Dan had to ring the registry office three times to change the date because I was poorly.

‘On the day he had to put my medication in his suit pocket.

‘But I managed to forget about everything for a second.’

After a quick civil ceremony in a registry office, the 20 guests ate steak and chips in a restaurant and then went to a casino.

Ms Welsh said: ‘When Dan proposed, I was really excited, but I never wanted anything big.

‘I said “let’s do it in a couple of months, with family and the children in a registry office and go for a meal afterwards”.

‘I didn’t want to be the centre of attention.’

After the ceremony Ms Welsh became ill again, forcing the couple to delay their honeymoon by nearly a year to ensure she was well enough to go to Cape Verde last March.

Ms Welsh said: ‘Dan’s been amazing, he took six months off work to look after me.

‘We will be celebrating five years together this July.’

She added: ‘The nurses in the hospital became my friends, I took them presents at Christmas.

‘They looked after me so well when I was feeling tired and poorly.’ 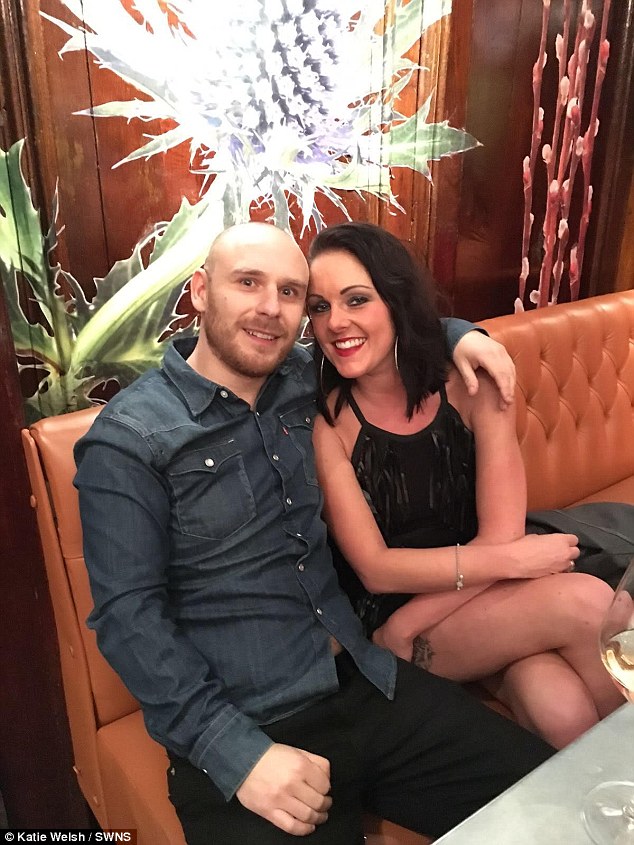 ‘I didn’t even feel ill’

Despite her ordeal, Ms Welsh managed to find a bright side to her drastic weight loss, as doctors insisted she tried to eat 3,000 calories a day.

She said: ‘It’s every girls dream being able to eat whatever you want.

‘When I got out of hospital I told Dan I wanted to go to my three favourite restaurants in Manchester and I put on half a stone in a weekend.

‘There was no way I was going to sit at home crying about it.’

Despite Ms Welsh suffering some mild symptom prior to her collapse, her diagnosis still came as a complete shock.

She said: ‘I’d had a cough for a few weeks over Christmas and I’d been feeling tired. But everyone’s tired at that time of year.

‘In January I lost four or five pounds, but I’d been trying to eat healthily and I was pleased about the weight loss.

‘Looking back it was the symptoms of cancer. It was crazy. I was still working full time, I didn’t even feel ill.’