A woman, who suffered from severe cystic acne for over 10 years, has revealed how falling in love has helped her to embrace her skin for the first time.

Madeline Roberts, 24, from Tennessee first developed cystic acne at the age of 14, causing her to feel ashamed of her appearance and diminishing her self-confidence dramatically.

The portrait photographer tried various acne treatments, but nothing helped Madeline, and she was left terrified of dating and hating her skin.

However, when she met her now husband, Trevor, 25, in 2016, her self-worth began growing and she learned to embrace her skin, regardless of scars and flaws.

Madeline hopes others will accept their acne and embrace it, rather than only show the ‘perfect’ sides of themselves on social media

Now, Madeline no longer feels so much pressure to live up to society’s version of ‘perfect’, and has stopped applying makeup every day before leaving the house.

She shares bare-faced selfies online to help her embrace her skin, and has finally learned to love herself.

Madeline wants to show other acne sufferers that healing acne isn’t always easy and having scars doesn’t lessen their beauty.

But it’s an ongoing battle, as she still receives criticism for her acne, with online trolls referring to her skin as ‘sandpaper’, and a masseuse at a spa recommended Madeline have a facial when she noticed her acne.

Having suffered with cystic acne since she was 14, Madeline is now keen to show others how to embrace themselves

It’s been a long journey for Madeline, who has spent years believing that her worth was valued on her appearance.

‘I had my first spot when I was nine, which I remember because my gymnastics teammates and I were all shocked that I had a big spot right on top of my nose,’ said Madeline.

‘It felt like it was there for an eternity because my mother wouldn’t let me pop it. It eventually went away, and I didn’t have another until I was 14, when I developed cystic acne.’

She says the acne hit her ‘full force’ as a teen, leaving her feeling ugly, and losing her self-confidence. 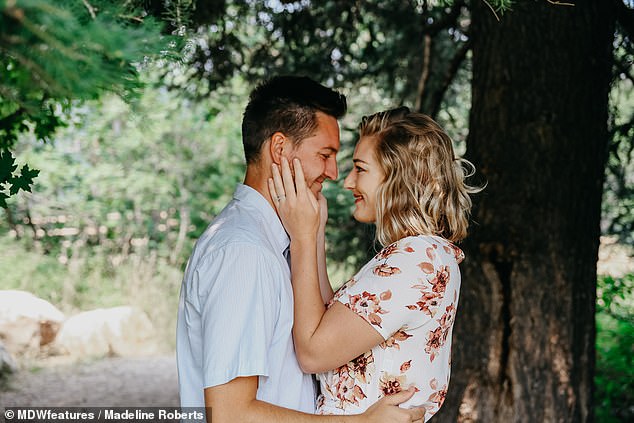 Meeting her now husband Trevor transformed the way Madeline felt about her skin, and she no-longer fears she is unlovable

Madeline tried a variety of treatments, however the acne was persistent and nothing helped her see any improvement.

She said: ‘The first treatment I went on was doxycycline, an antibiotic used for acne. This worked well for a few months and then my skin became immune to the treatments. I tried spironolactone, minocycline, birth control pills, cutting out dairy, even Accutane. The acne persisted through everything.

‘My acne and scarring were most severe when I was about 20, that’s when I decided to finally try Accutane.’

She went on: ‘At that point I felt hopeless. I felt like acne was supposed to go away after puberty, yet I was 20 years old. It was ridiculous that I had such severe acne after all the treatments I had tried.’ 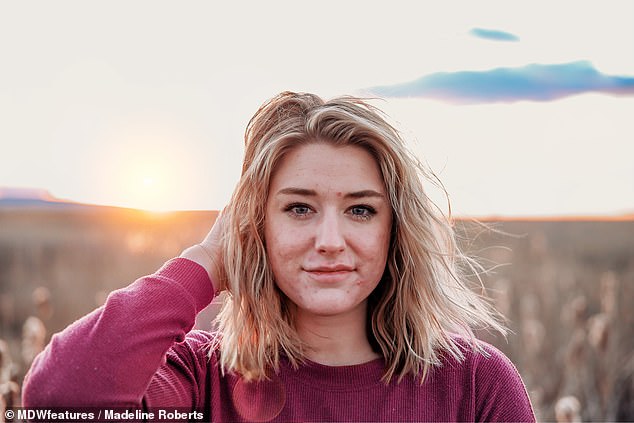 Madeline’s acne was so severe that at one stage she wouldn’t leave the house without makeup. She is now learning to love her skin 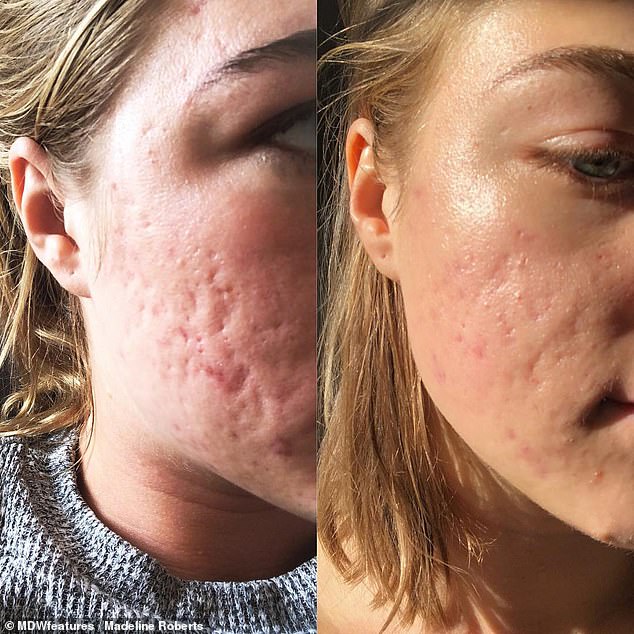 Madeline’s scars, which have come from suffering from cystic acne for over ten years. She was first diagnosed aged 14

Madeline feared dating and would cover her face with thick glasses because she didn’t think that anyone could accept her appearance.

She would cry with loneliness, and thought that she would be unlovable unless she found a solution to her skin condition.

It was only meeting now husband Trevor, 25, in 2016 that helped her to fully accept herself, acne and all.

She said: ‘He showed me unconditional love despite me feeling unworthy of it. He saw my heart as beautiful which made the rest of me beautiful in his eyes.’ 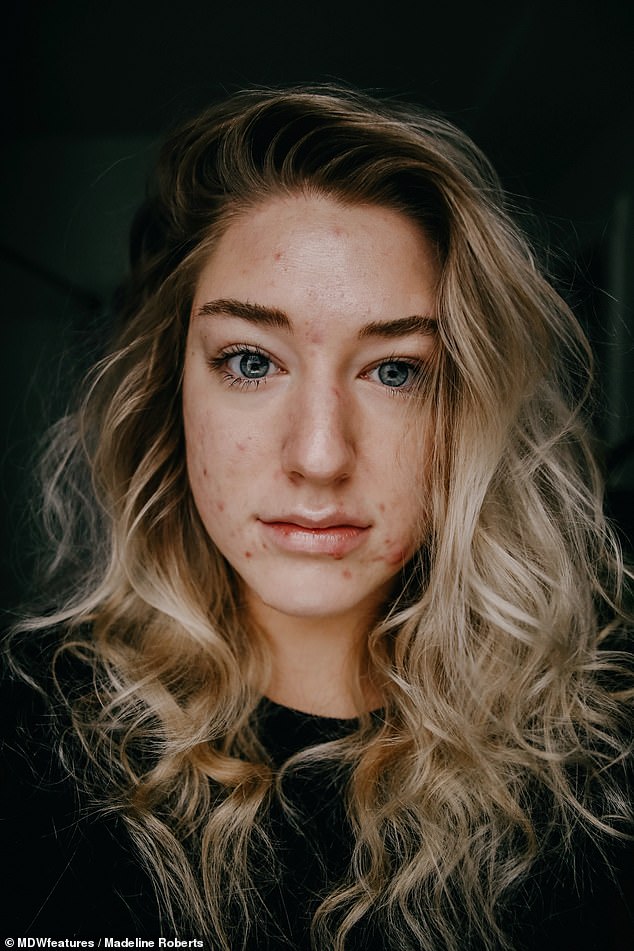 Before meeting husband Trevor, Madeline would cry from loneliness and worry that she was ‘unworthy of love’ thanks to her acne 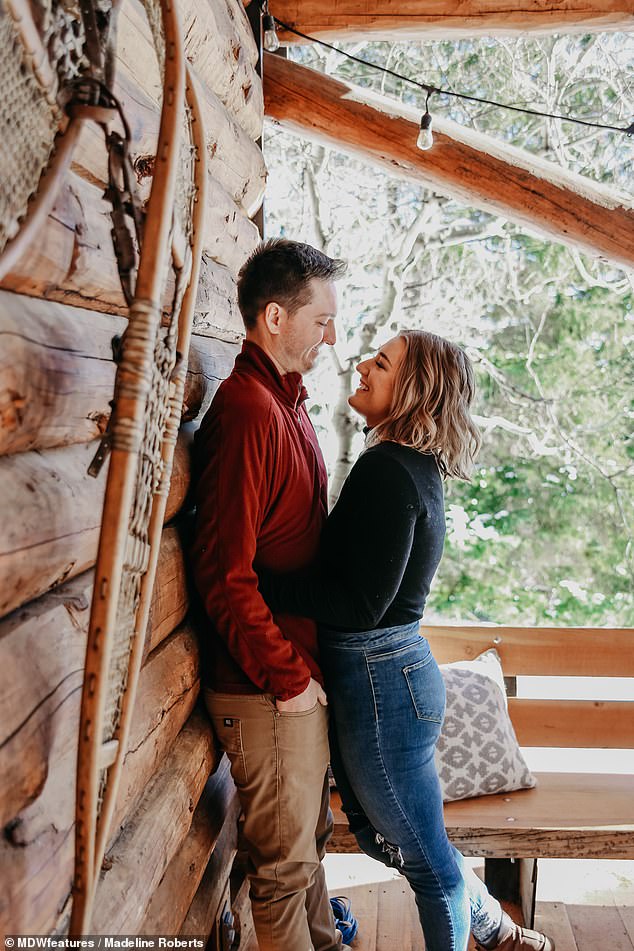 Madeline used to hide her skin and wouldn’t leave the house without makeup, until meeting her husband who taught her to appreciate her beauty

Early on in their relationship, Madeline feared Trevor would end the relationship over her skin.

She said: ‘I even thought he might break up with me when I had my first bad breakout when we first started dating.

But he put beauty into perspective for me and proved that it really is what’s on the inside that matters.’

Madeline and Trevor married in June 2017 and she now accepts her appearance after coming to realise that society conditions women into believing a flawless appearance defines them. 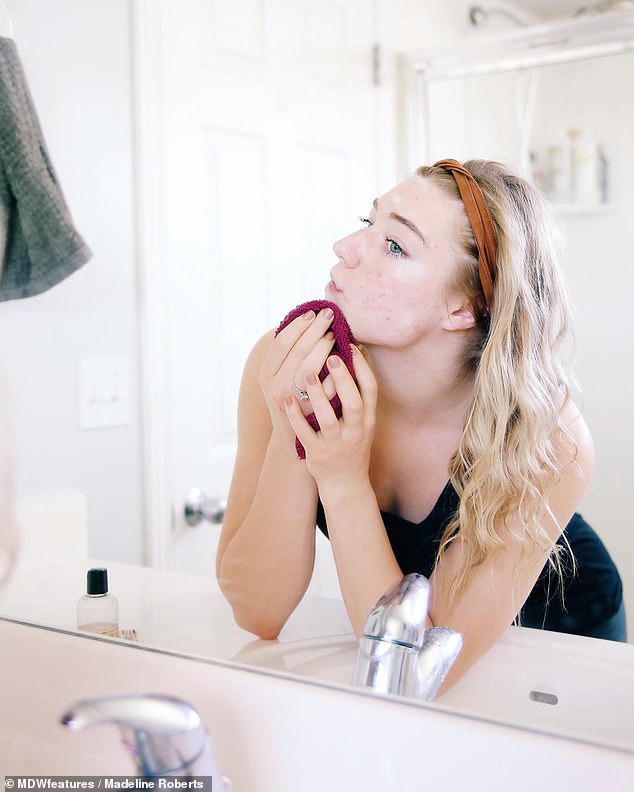 She hopes that by showing her imperfections on social media, she will encourage others to do the same 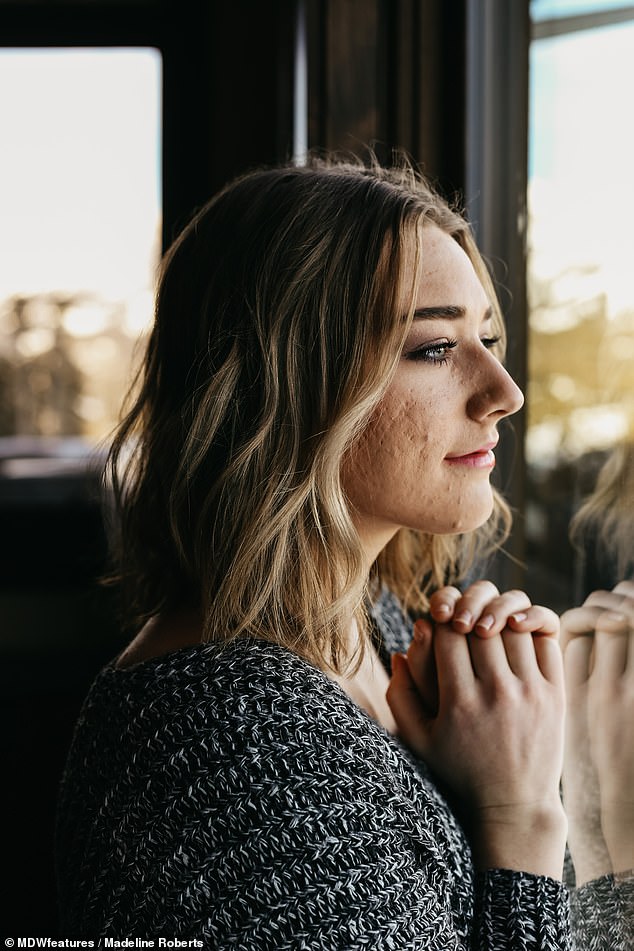 Rather than trying to heal her acne with treatments or covering it with makeup, Madeline embraces it and prefers to show the unfiltered aspects on her social media.

‘I think of Instagram influencers and celebrities as artists whose canvas is their face. Their physical beauty is the artwork they are selling,’ said Madeline.

‘As humans, we’re drawn to beautiful aesthetics and I don’t think there is anything wrong with appreciating art and beauty.’

WHAT IS CYSTIC ACNE?

Cystic acne – the most severe form of the skin condition – occurs when oil and dead skin cells build up deep within hair follicles.

If these become infected, it can cause boil-like blemishes.

Spots occur when a pore in the skin gets clogged, usually with dead skin cells. If bacteria enters the pore, it can become red and swollen.

Cystic acne takes place when this infection goes deep into the skin, creating tender bumps that are full of pus.

If the cyst bursts, it can spread the infection, causing more break outs.

Sufferers are usually in their teens or early 20s, but can be as young as eight or as old as 50. Cystic acne is more common in men.

The face, chest, back, upper arms and should are most often affected.

Cystic acne’s exact cause is unclear but is thought to involve the hormones androgen.

Androgen increases during puberty and can result in pores getting clogged.

Over-the-counter medication that can ease milder acne often have no effect on cystic forms.

A dermatologist may prescribe oral antibiotics that control bacteria and lower inflammation.

Creams and gels containing retionoid, a form of vitamin A, can also help to unclog pores.

Birth-control pills may also help women to regulate their hormones.

It is important to seek treatment to prevent scarring.

Acne sufferers should not pick at their blemishes as this may push the infection deeper and make it spread.

Sufferers should also try and relax due to stress causing the body to release more hormones.

She went on: ‘But at the end of the day if that celebrity is afraid to be seen bare-faced and un-photoshopped then I think they have fallen for the lie that women need to look beautiful in order to be valued.’

‘It’s important for celebrities to show the world that they are just regular human beings with physical flaws like the rest of us.’

She also revealed that she still sometimes struggles to embrace her skin, and misses her ‘scar-free’ face.

Madeline said: ‘There are definitely days where I mourn the loss of the scar-free skin I once had. Although my breakouts are much less severe than they were in the past, they can be painful and annoying when they do happen.’ 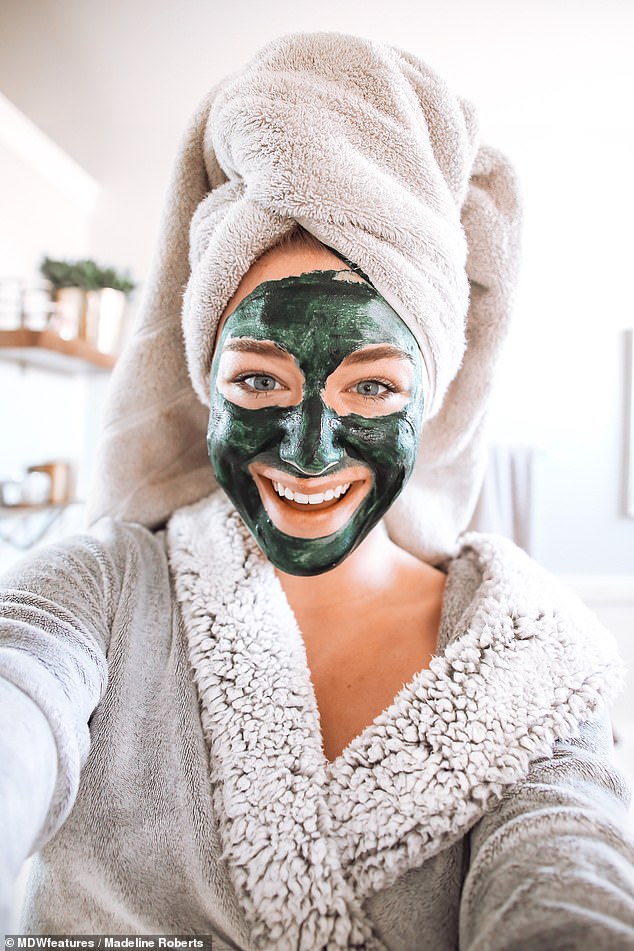 Madeline tried several treatments in an effort to tackle her acne, but struggled to find anything that could counter the spots 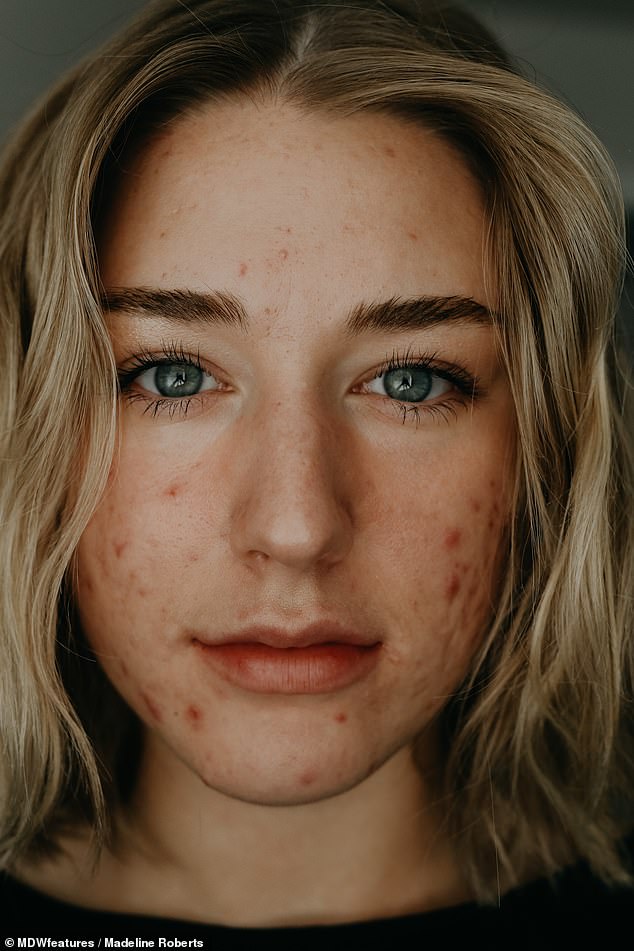 The portrait photographer still mourns the loss of her scar free skin, and calls her breakouts ‘painful and annoying’ 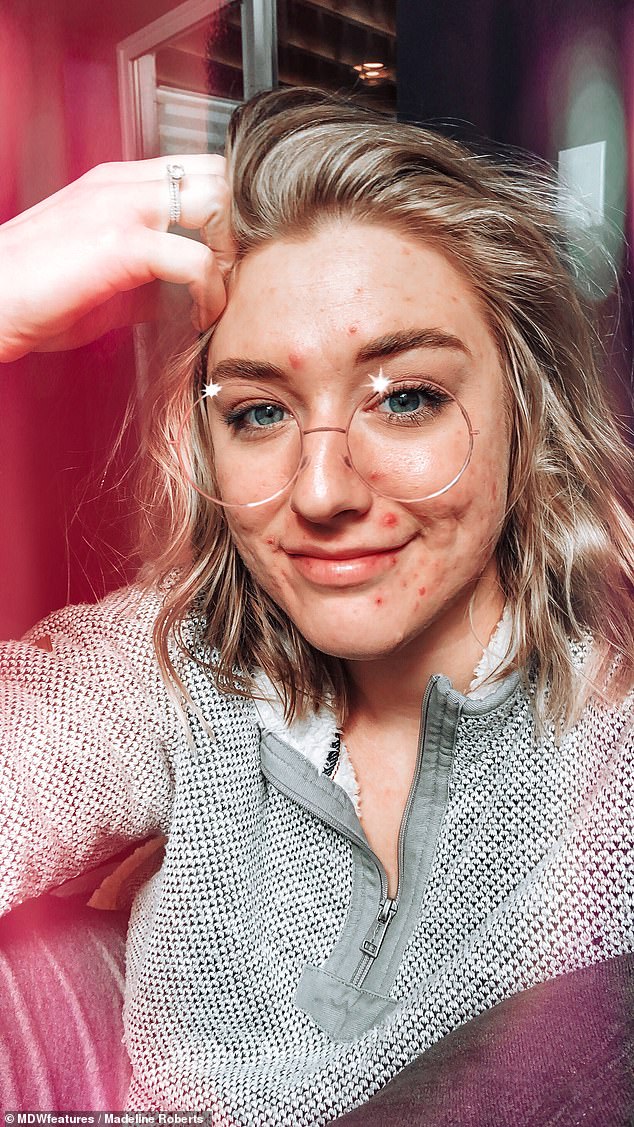 But the acne doesn’t ‘control’ her like it used to, with Madeline saying: ‘It doesn’t decide for me whether I sit by a window at a restaurant or cause me to avoid eye contact while talking to someone.

‘There’s still a lot of work to be done in our beauty-obsessed culture to make this world a safe place for acne sufferers.

I’m happy to see that girls in the acne community on Instagram are catching on and starting to embrace their scars with me. My hope is that we will create a ripple effect that will change our culture, one girl at a time.’ 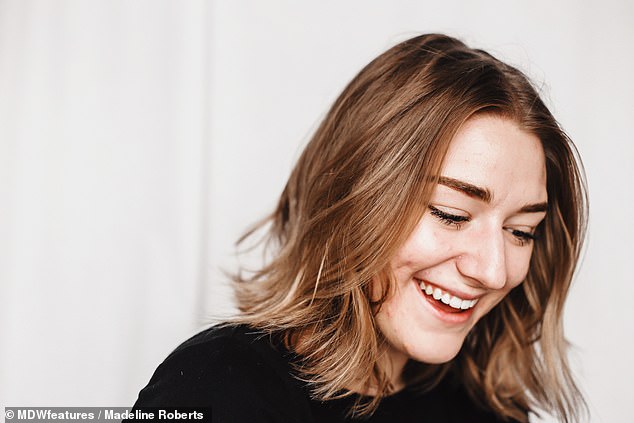 She went on: ‘Ultimately, I want girls to know that they are not alone, and that there’s hope for healing but it may not be in the way that they think.

‘When you find your worth in something bigger and less superficial, then you’ll notice the sadness over your acne disappear.’