A woman left with her great grandfather’s WW1 diary has put the call out for someone to help her decode his blurred hand-written messages.

Jodi Shepherd’s great grandfather, Fredrick Shepherd, served for the British army in 1914 and noted his experiences in a book, now in the hands of his great granddaughter.

But while Ms Shepherd can make sense of the odd sentence, she said his older style handwriting used made it hard for her to get through a page at a time.

‘I can make sense of some words … I’ve had it for a while and would love to be able to just read one page,’ she told Cairns Post.

Ms Shepherd said the diary was too fragile to pass around or send out to people, but she had a managed to photocopy its pages.

‘(My grandfather’s name) was Fredrick Shepherd or on his records he is known as ‘Captain Fredrick Francis Cherrett Shepherd’ he served for the British army.

‘He was 15-years-old when he joined and funnily enough we share the same birthday.’

Ms Shepherd has already received several messages from people saying they can read a page from her great grandfather’s diary she shared online. 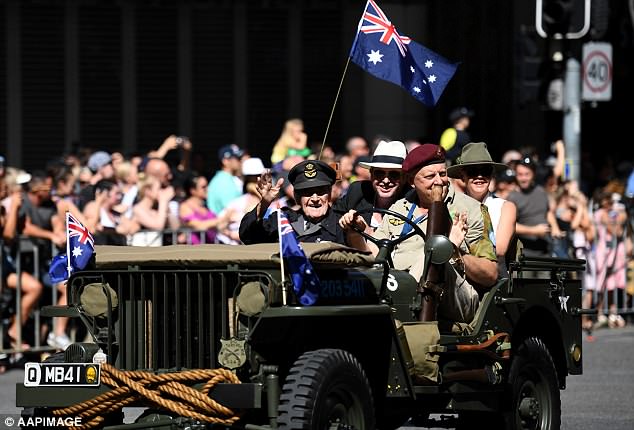 Ms Shepherd said the diary was too fragile to pass around or send out to people, but she had a managed to photocopy its pages (pictured: war veterans take part in an Anzac Day)

‘Fight from 2am to 6am. Like hell. Germans rotten Germans shelled us 4 days. Germans target stranded fixed about 6pm. Awful sight passed heap of dead and wounded. All cheerful shouted good luck … they are still shelling as we all smile,’ someone suggested it read.

She said from what she could tell, her great grandfather met his wife – a nurse for the Russian army – during the war, and they both later settled in France.

They were there, she believed, for long enough to have her grandfather, who moved to Australia when he was three.

Ms Shepherd has since got her hands on the original discharge summary from WW1 as signed by King George, and some of her grandfather’s WWII photos and medals.

She wore them proudly in both her great grandfather and grandfather’s honour at Wednesday’s Anzac Day dawn service. 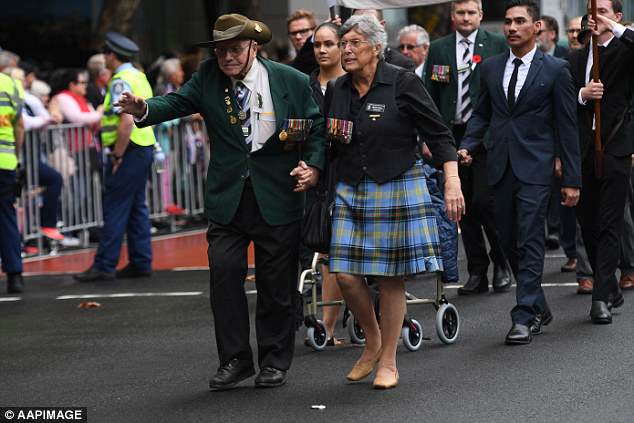 Ms Shepherd said the diary was too fragile to pass around or send out to people, but she had a managed to photocopy its pages (pictured: Ex-servicemen and women march with current military personnel through Elizabeth street during the Anzac day march in Sydney)