A 51-year-old mother has revealed how she spent 30 years hiding her silver locks after going grey at just 19 years old – while admitting that she has been inundated with inappropriate pictures and DMs from men since she stopped dyeing her hair.

School director and singer, Katrina DiMare, who lives in Jupiter, Florida, was still in her teens when she first noticed her hair was greying.

Fearful of what her peers would think, Katrina started to dye her hair in a bid to conceal her silver strands. Initially Katrina maintained her colored hair every few months but as the years went by, the proportion of her hair that was fading to grey also increased, meaning that the process became more and more complicated.

All natural: Mother-of-one Katrina DiMare has revealed how she learned to embrace her gray hair after spending more than 30 years covering it up with dye 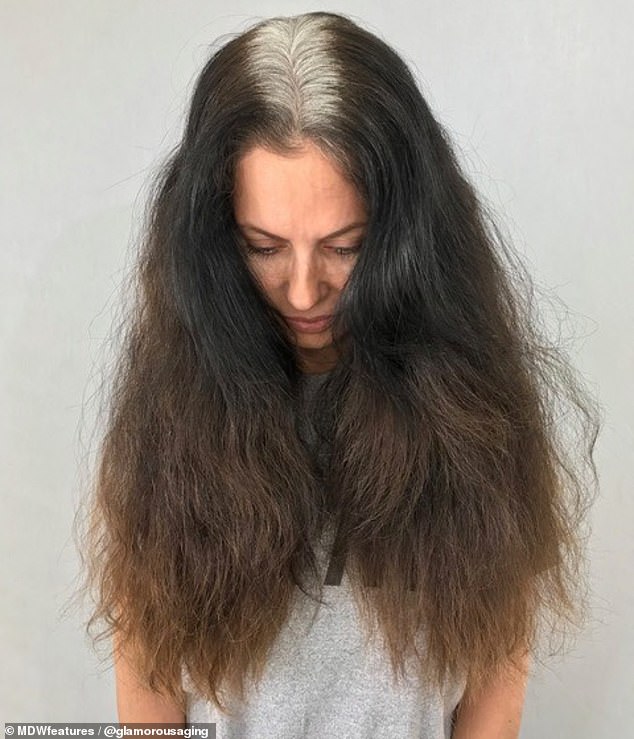 Complicated: Katrina spent decades dyeing her hair two to three times a month in order to keep her gray roots covered up 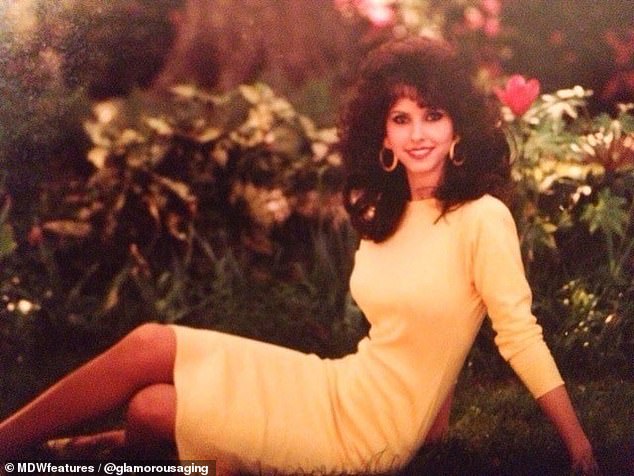 Way back when: The Jupiter, Florida, resident, pictured in her early 20s, was afraid what her peers would think when she started going gray at 19

By the time she was in her thirties and forties, Katrina’s natural hair color was half silver and she had to dye it two to three times a month to keep her ‘skunk stripe’ of lighter hair at the top of her hairline hidden.

Exhausted by the almost constant maintenance of her hair color, Katrina decided she no longer wanted to dye her hair and four years ago she embarked on researching the best route to go down for her silver hair journey.

Katrina decided the best way to embrace the silver was to gradually blend it by dying it light brown in February 2018, then a light blonde in April 2018 and she used a purple shampoo to transform the blonde into an ash grey.

Now two years on, Katrina’s hair is an incredible dazzling natural silver and her husband Mark, 49, and daughter Alessandra, nine, are her hair’s biggest fans.

Sharing pictures of her stunning tresses on Instagram under the handle @glamorousaging, along with tips on how women can age with style, has won her an incredible 18,200 followers – and she says not a day goes by where she doesn’t receive a compliment about her mane.

However she also receives a host of unwelcome, and very inappropriate, comments from men.

‘I guess my silver journey started around nineteen. I remember seeing the bright white strands sprinkled through the crown of my head,’ said Katrina. 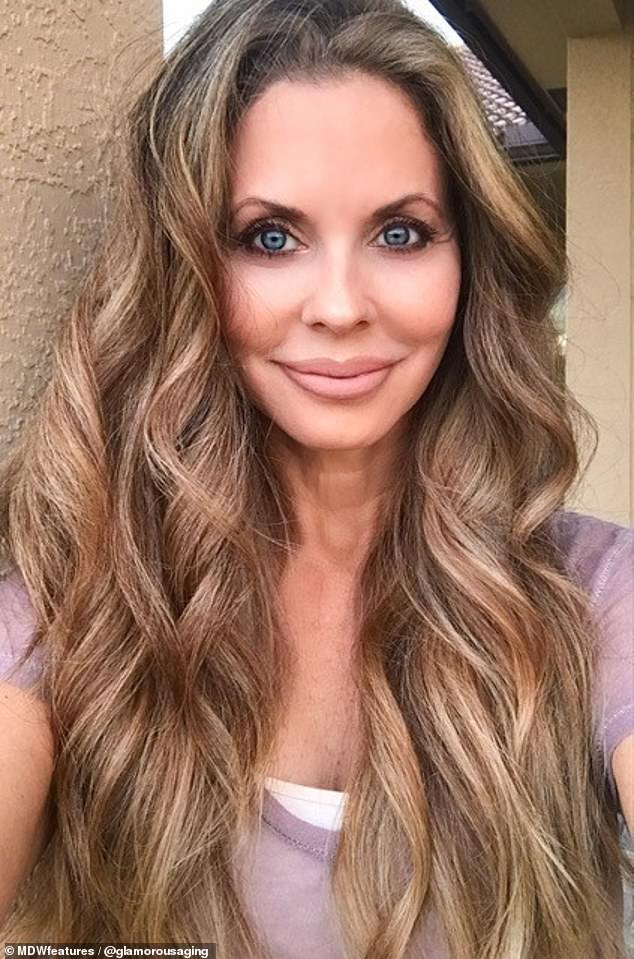 Making changes: After deciding to embrace her natural gray hair, Katrina had to slowly work her way back to her natural color by subtly changing the shade of her dye to a light brown 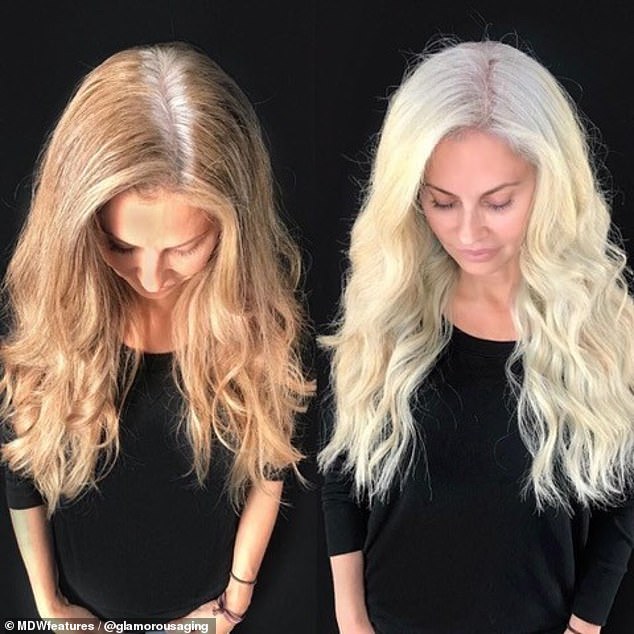 Easy does it: Katrina then went from light brown to platinum blonde in order to slowly blend her hair back to silver 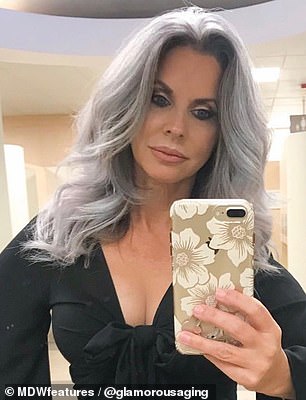 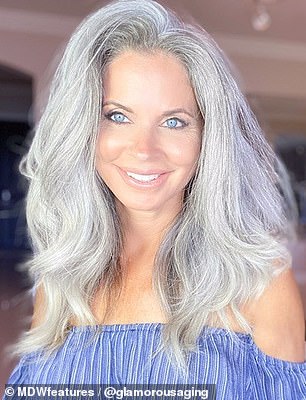 Voila! The singer now happily shows off her silver hair online, while also sharing tips for other women on how to age gracefully

‘But, this was the late 1980s, young girls didn’t have silver hair. Consequently, the dying of my hair began. I colored my hair for the next thirty years. As the years progressed and my silver hair increased, so did the frequency of my dye jobs.

‘By my mid-thirties, I was fifty per cent silver. As my silver increased, so did the frequency of coloring to keep it concealed.

‘By the time I was in my mid forties, I was having to dye it every ten to fourteen days to keep my skunk stripe in the middle of my head covered.

‘It was extremely exhausting, it would take one and a half to two hours a week every couple of weeks. I had so much silver, it was like a neon sign against my dark hair even when it was a week of growth.

‘I have never regretted my decision to go silver. I wished I had done it sooner, I have never had more compliments on my hair in all my life.

‘I get compliments every day on my hair now. They will say, “Wow, I love the color” or, “Hair goals” or, “Gosh that is a beautiful color” – and then I tell them it is my [natural] hair color and they are stunned.

‘My family love it, but they are my family, what are they going to say? They do say they can find me anywhere now, just look for the bright silver head. 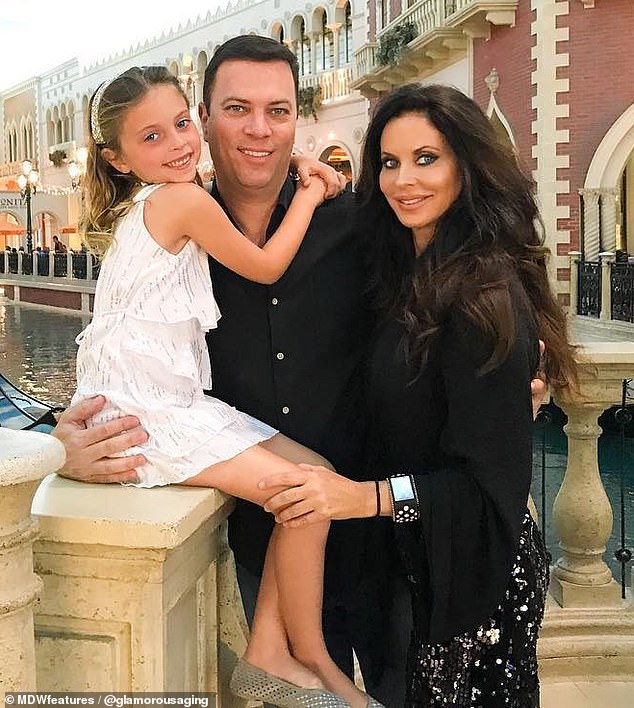 Before: Katrina says that her husband Mark and daughter Alessandra love her natural hair – although she jokes that, because they’re her family, they have to 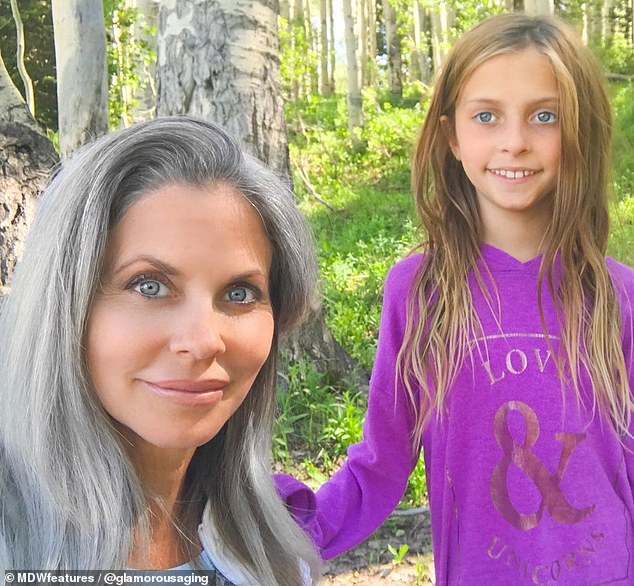 Thrilled: ‘I have never regretted my decision to go silver. I wished I had done it sooner, I have never had more compliments on my hair in all my life,’ Katrina said 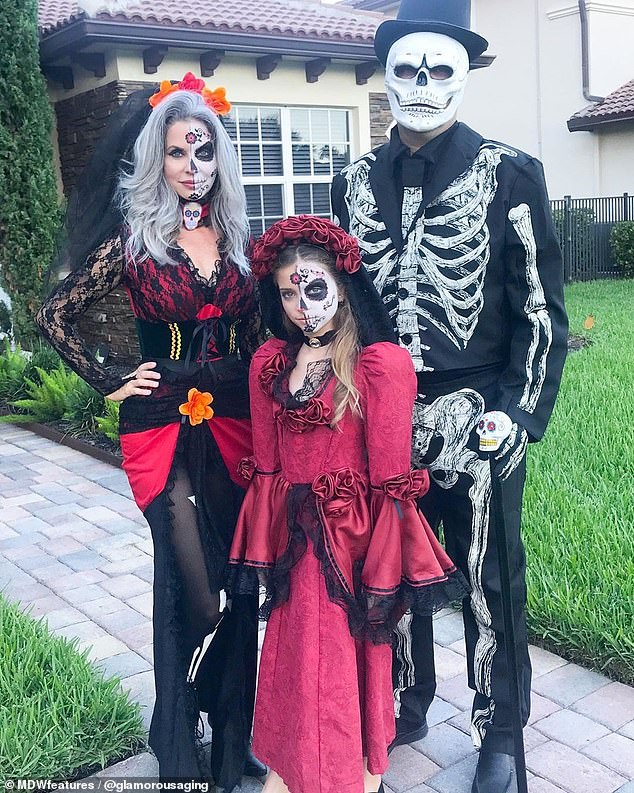 ‘Tiresome’: Despite Katrina being happily married, she says she regularly receives inappropriate messages and even pictures from men on Instagram

‘I think hair and makeup should be approached with beauty in mind, not trends. What looks good on a twenty year old can make a fifty year old look ridiculous.

‘For example, the young beauty gurus can try bold makeup colors and some harsher contouring, on a mature face, it can look a little crazy.’

During the her hair transformation, Katrina had to be careful to avoid breakage and damage to her hair.

Now, she often gets women contacting her telling her she is their inspiration for embracing their natural hair color as they get older and Katrina is proud of this, she shared her words of advice to others.

‘So far, literally every compliment I have ever received has been positive,’ said Katrina. 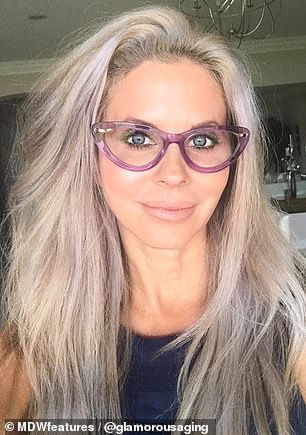 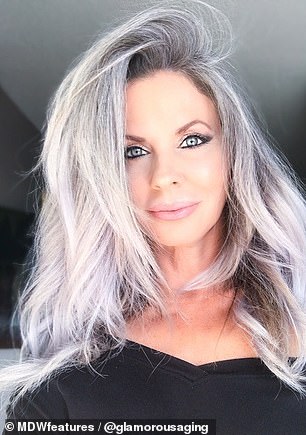 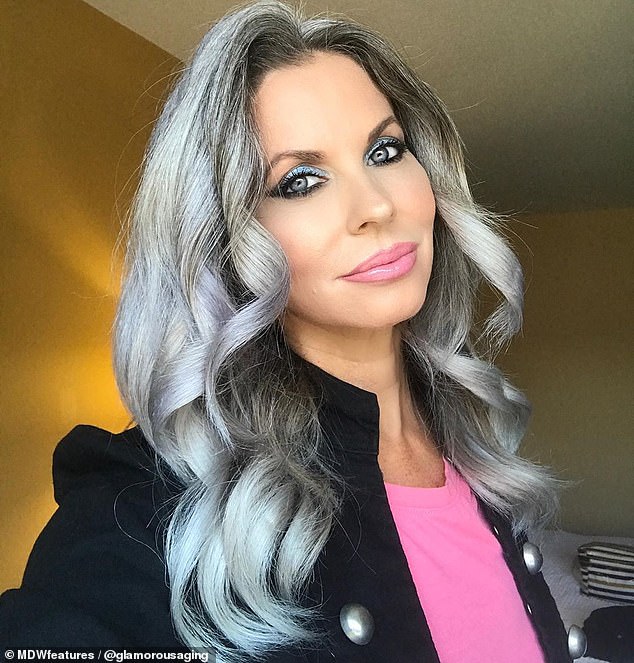 Helpful: Katrina says she often gets women contacting her telling her she is their inspiration for embracing their natural hair color as they get older 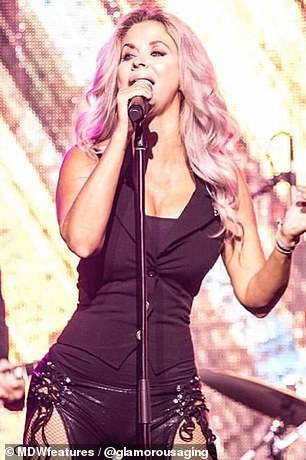 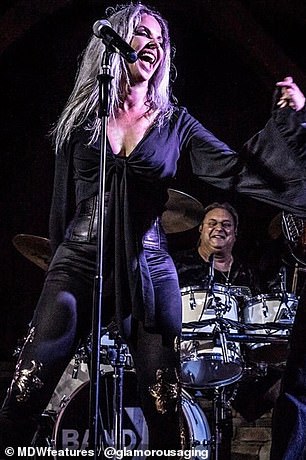 Rocker: Katrina, who is a singer, happily shows off her gray hair on stage

‘There was one time I got a backhanded compliment of, “You look too young for silver hair… but it looks good.” But, that is the worst one.

‘I get a lot of, “You are my inspiration to go silver.” Or, “You make me want to have silver hair.”

‘I do feel that you have to be really ready to do it, though. No one can really push you over the edge. It’s not like getting new highlights.

‘It is truly a transition and a learning curve. I had to learn new makeup; I wore darker colors and more makeup as a brunette, now that looks awful and I go with more natural colors.

‘So, you have to be prepared to learn the new ways to see yourself with your new coloration.

‘One thing to remember when you grow out your silver is that everyone is different. Your silver pattern is like your fingerprint, only yours.

‘My hairline is dark and the rest is bright silver. Some people have a gorgeous streak right at their forehead or maybe their temples.

‘Regardless, you will find as you transition that you discover the real you. You have a beautiful canvas of colors that are all your own.’