A chronic insomniac has cured herself after over a decade of sleepless nights, and hundreds of pounds wasted on sleep aids and supposed ‘cures’.

Sarah Plater, 32, from Oxfordshire, suffered from insomnia that not only prevented her from getting to sleep at night, but left her constantly tired, and began to rule her life.

‘I noticed that one day when I’d had alcohol I had a particularly bad night, so I eliminated booze,’ she explained. ‘Then I did the same with lay-ins, and nights out. Gradually it got so bad that it was costing me friends and relationships.’

In 2012 Sarah had returned from a relaxing break in Corfu, and in bed that evening she stopped trying to will herself to sleep like she usually did, and focused on the holiday instead.

The next thing she knew, she’d woken up refreshed having had her best night sleep for years, and from then on she started learning visualisation techniques to retrain her brain to help her drift off naturally.

She’s now written a book to share her tricks with other insomniacs who are desperate for a cure.

Sarah Plater, 32, from Oxfordshire, suffered from insomnia for more than a decade but cured her condition with simple visualisation techniques 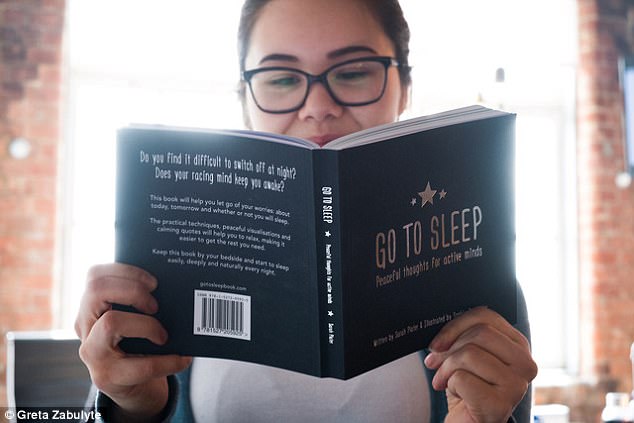 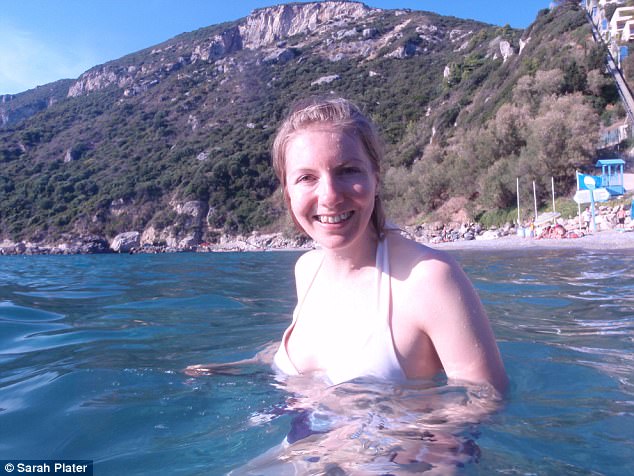 Sarah’s insomnia began when she started sixth form college at 16.

‘I’ve always been a worried but when I started college I had a lot on my mind,’ Sarah explains. ‘I would lay awake at night thinking about things like coursework and classmates for hours and it prevented me getting to sleep.’

Soon, the insomnia became so bad that she was constantly tired.

A fixer, Sarah tried everything under the sun to try to solve her problem, from sleeping pills and scented pillows, to books, special machines that drew patterns on the ceiling to fad diets.

HOW ‘THOUGHT BLOCKING’ CAN GIVE YOU PERFECT NIGHT’S SLEEP

Sarah’s book, ‘Go to sleep: Peaceful Thoughts for Active Minds’ is about changing your attitude towards sleep.

If you have an active mind it’s like having a wild horse that runs off in all directions.

The book is about reigning that horse in and taming it so that it goes in the direction you want.

Insomniacs have lost trust in their ability to fall asleep, leading to a type of performance anxiety. The pressure to fall asleep makes it impossible to achieve.

The book helps you to re-learn how to trust in your natural ability to fall asleep through a technique called Thought Blocking.

Insomniacs typically lay there thinking of something that’s anxiety inducing and focus on that negative thought.

This results in an adrenaline rush and a racing heart. Thought blocking is when you eliminate that thought by replacing it with a different more positive one instead. This could be a neutral word, such a ‘one’ or ‘the’.

Alternatively, you can focus on a 4-7-8, breathing pattern – you breathe in for four counts, hold for seven counts, and out for eight counts.

For Sarah, the Thought Blocking technique that works best is actively pursuing a more desirable thought – in her case it was a visualisation of her dream bedroom, or a happy memory.

Go To Sleep contains several different visualisations for readers to try if their own isn’t working.

Be prepared for the fact that your mind will keep going back to anxious thoughts, particularly if you’ve had insomnia for a long time.

Don’t get frustrated, just calmly bring your mind’s focus back to to your chosen positive thought instead.

She estimates she spent hundreds and hundreds of pounds on remedies and still didn’t get any shut eye.

Desperate to find a cure, she eliminated alcohol and lie-ins, but ultimately became obsessed with her inability to sleep.

When she eventually did drift off her mind would be working on overdrive, so she experienced vivid dreams and would wake feeling exhausted rather than refreshed.

‘I was so tired all the time I practically lived in sunglasses to cover the dark shadows under my eyes,’ explained Sarah. 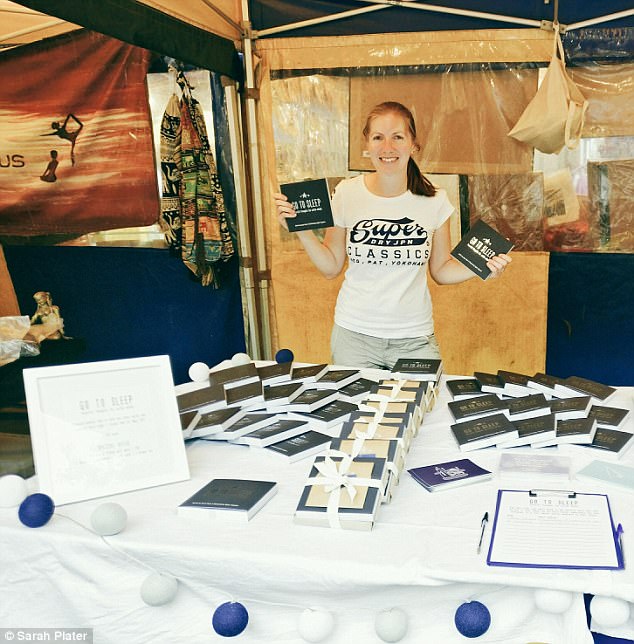 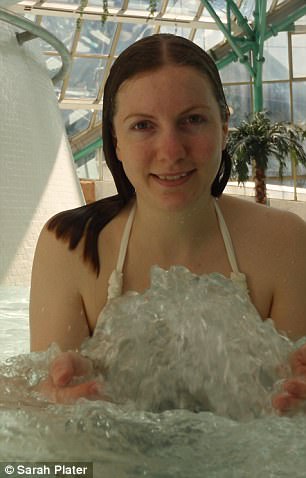 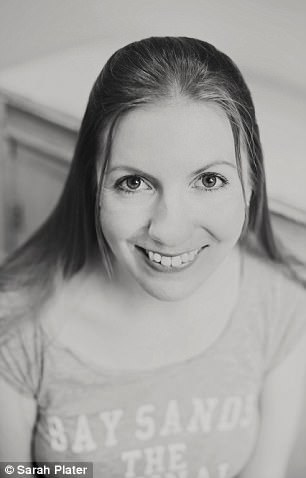 But after her holiday to Corfu with her then husband-to-be, Jonathan Wellstead, she experienced her breakthrough.

‘It was a complete epiphany,’ Sarah recalled. ‘After that I stopped trying to get to sleep at night and instead started learning visualisation techniques to retrain my brain to let myself drift off to sleep naturally.’

Because Sarah had suffered from sleep problems for so long they were ingrained habits, so it took nearly a year for her to unlearn them and retrain her brain fully so that she was sleeping properly again. 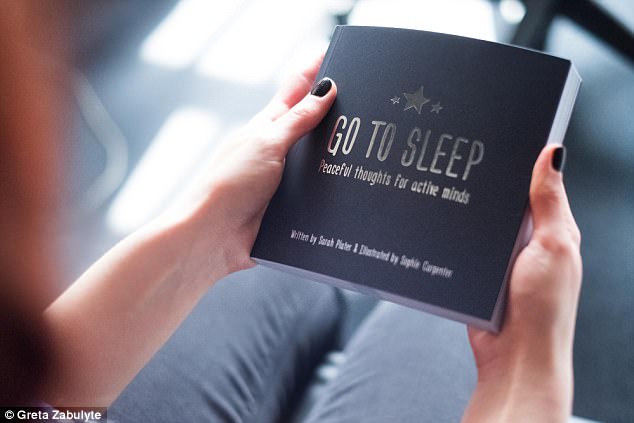 Sarah’s book has been published thanks to hundreds of orders from backers on the crowd-funding platform, Kickstarter 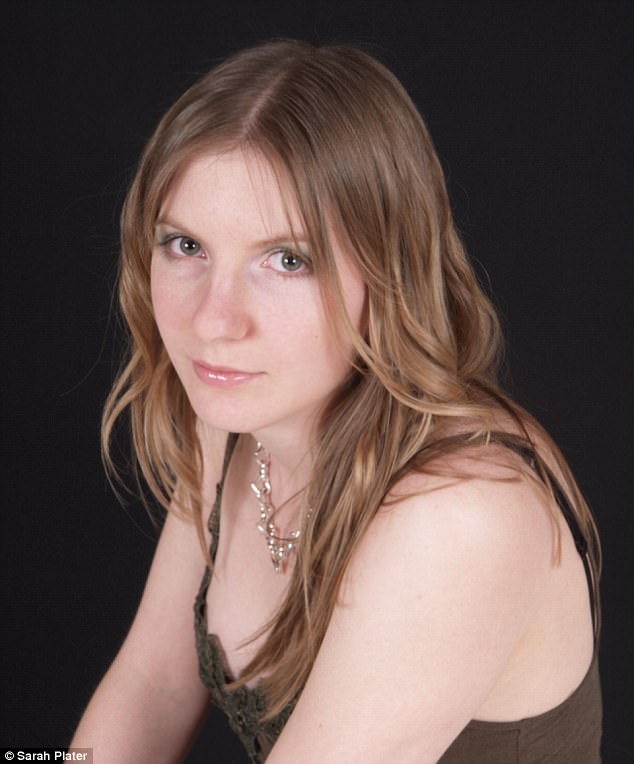 After a decade of restless nights, Sarah is now sleeping perfectly

It transformed Sarah’s life so much that in November last year, Sarah, who married Jonathan in 2014, started writing a book to share her secret and help other insomniacs.

Her book ‘Go to sleep: Peaceful Thoughts for Active Minds’ has now been published thanks to hundreds of orders from backers on the crowd-funding platform, Kickstarter.

Best of all, after over a decade of tossing and turning, she now sleeps through the night.

Go to Sleep: Peaceful Thoughts for Active Minds was published by Mr and Mrs Creative and is available from gotosleepbook.com for £15.