Woman’s reaction to Beyonce at Grammys is the best meme

An unnamed woman has found herself at the center of a viral social media frenzy, becoming the latest unsuspecting star of one of the internet’s favorite new memes.

The woman made headlines around the world after she was pictured staring open-mouthed in shock as she was passed by Beyonce, 36, and Jay-Z, 48, in an image shared by the singer herself.

And now the photo, snapped in a New York hotel as the couple made their way to a pre-Grammys event – has earned the unlikely star more than her five minutes of fame.

OMG! An unidentified woman stood with her mouth open in shock as Beyonce and Jay-Z walked past her in a New York hotel Saturday evening and her reaction was caught on camera

Reactions: After Bey posted the photo with the woman in the background the internet immediately turned it into a meme 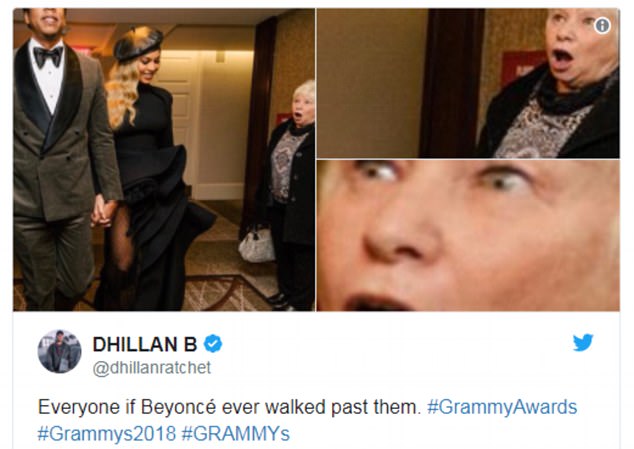 Amazing: The meme started trending on Twitter because everyone found the woman’s star-struck reaction way too relatable

And it’s hardly surprising; the woman’s facial reaction is so candidly hysterical, it captivated the Twittersphere within minutes of being posted, with many re-sharing the image while commenting that it is the same face any person might make when faced with such an A-list couple.

The woman is pictured off to the side staring at Bey with her mouth wide open, stunned and in awe, while Beyonce is pictured looking down smiling shyly and walking right past her.

When Bey posted the photo of the lady, the Internet spiraled out of control, saying how the woman’s reaction is ‘pretty much all of us.’

Some of the most hilarious memes that people shared on Twitter included one from a user who wrote, ‘Everyone if Beyonce ever walked past them.’

People just couldn’t handle how relatable the photo was, while another user wrote, ‘When you realize you’re lucky to be alive during the same era as Beyonce.’

Unbelievable: In a hilarious tweet, one user shared that if only a partner could look at someone with so much awe 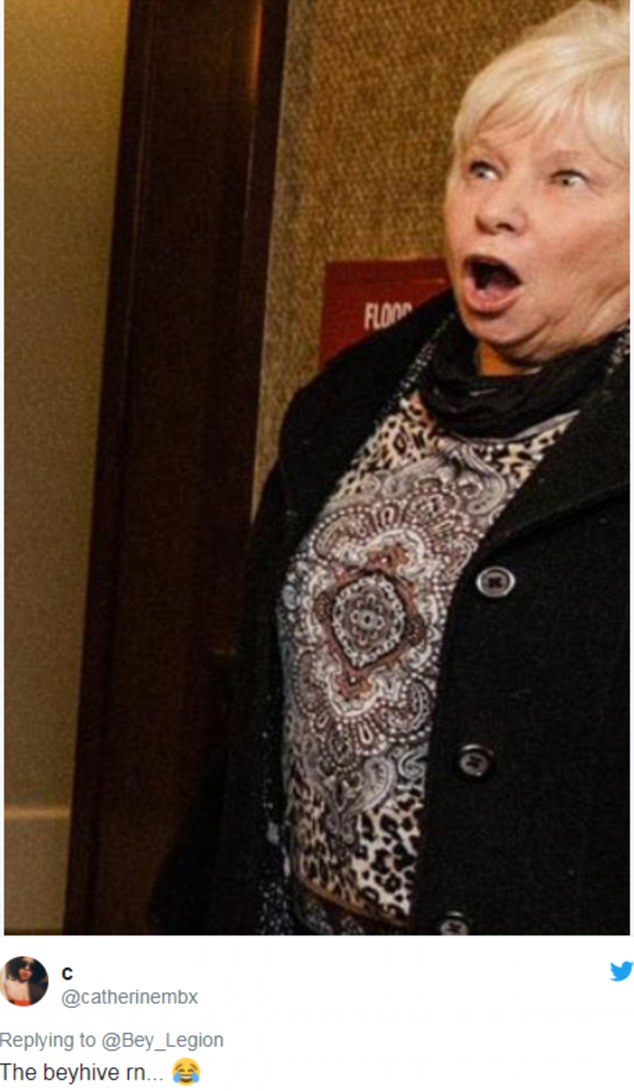 Viral: Everyone was siding with the woman and one user joked that the Beyonce’s fans, known as the ‘beyhive,’ are probably all reacting the same way to Bey’s outfit

Hysterical: One user joked that the woman’s reaction was due to her being happy about being alive in the same time as Bey

One person couldn’t stop laughing at the fact that Bey made sure to include the woman’s reaction in her slideshow, saying, ‘Lmao this has me weak cause she could’ve easily cropped that woman out but she said, “No. I am Beyonce. Watch how the peasants look at me.”’

Meanwhile, one person had the complete opposite reaction sharing, ‘I love the way that Beyonce is smiling.

‘It’s like ‘I know. It happens all the time, but it is still sweet when people react like that.’ Like she’s a teeny bit embarrassed but still happy.’

The memes only got more hilarious with one user writing, ‘This lady is all of us when we randomly see Beyonce and Jay-Z walking by.’

Another user wrote, ‘99.999999% of us who have met Beyonce,’ while another person shared, ‘Dear internet, I present to you this year’s “Distracted Boyfriend Meme.”‘

Breath: While another user, replied to the being alive tweet, joking that the reaction is due to breathing the same air as Bey 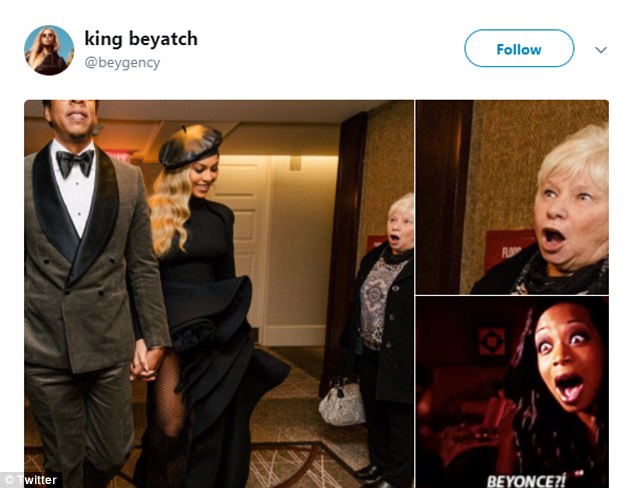 Funny: One user shared the photo with another meme attached to it of a woman looking just as shocked about Beyonce

True: This tweet is so hilariously true because who wouldn’t make this face upon meeting Queen Bey

Lucky: For those who have ever been lucky enough to meet Bey, then this is very relatable

Wow: If we were ever to see Bey and Jay, then this would definitely be most people’s reactions

Memes: Aside from the memes that already started about the woman’s shocked face, now there’s going to be even more memes about Jay-Z in the photo

Some of the other funny comments came from one user who shared, ‘Never trust someone who sees Beyonce and doesn’t make this face,’ while another person hilariously joked, ‘Find someone who looks at you the way this lady looks at Beyonce.’

On Saturday, Bey posted a series of professional photos to her Instagram slideshow of her and Jay-Z in their hotel hallway, getting ready to attend the Clive Davis Pre-Grammy Gala.

Beyonce looked stunning in her custom black Azzi & Osta gown and fishnet tights with a jaunty beret on her head.

The pop superstar held hands with her rapper husband, who is dressed in a velour tuxedo and is looking straight ahead.

In other photos Beyonce shared, she and the Tidal mogul are shown snuggled up together with Jay-Z standing behind his wife with one arm around her waist and planting a kiss on her shoulder. 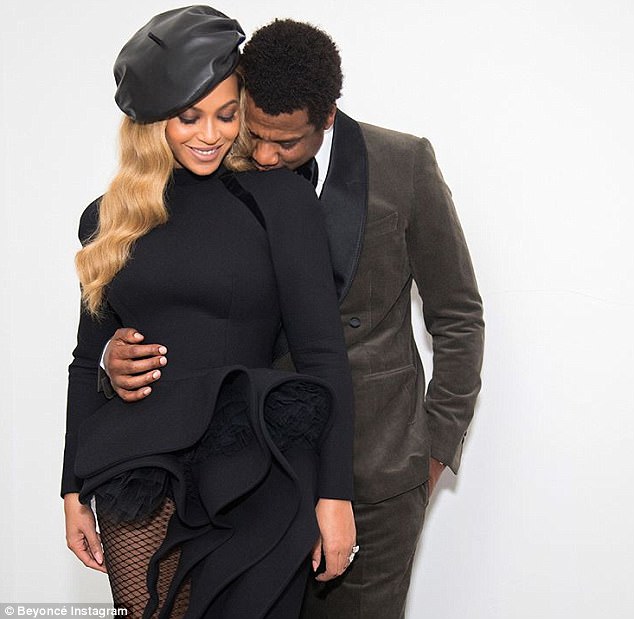 In another snap Beyonce shared, she and Jay-Z are shown snuggled up together with Jay-Z standing behind his wife with one arm around her waist and planting a kiss on her shoulder 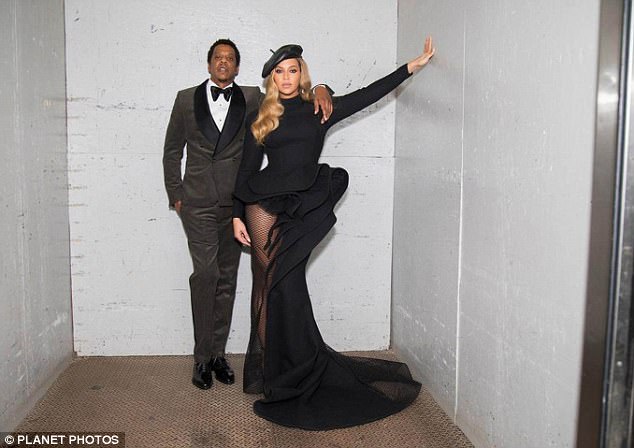 Glamorous duo: Beyonce, 36, wore a stunning black gown and fishnet tights with a jaunty beret on her head. Her rapper husband, 48, was dressed in a velour tuxedo 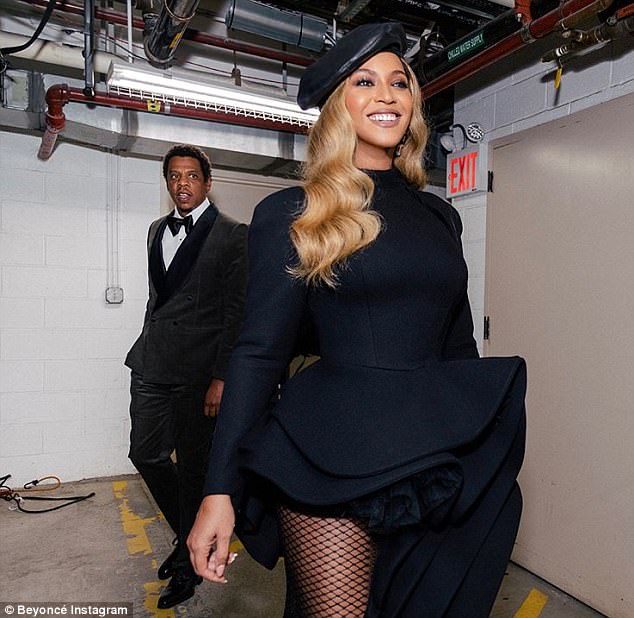 On top of her game: Beyonce shared several photos to social media as she and Jay-Z took New York by storm 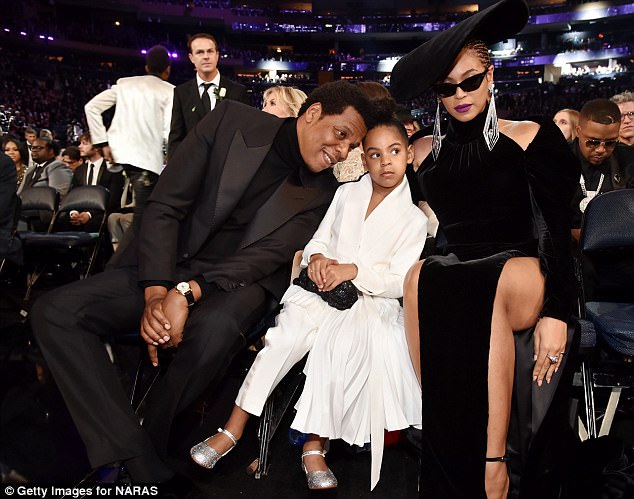 Shut out: On Sunday night, the couple brought along daughter Blue Ivy, six, to the Grammys. Although he had eight nominations, the 4:44 hitmaker went home empty-handed

On Saturday night they headed to the annual pre-Grammys gala where the 4:44 hitmaker was honored with the Salute to Industry Icons Award.

The pair were seated front row for the televised show held at Madison Square Garden and brought along their six-year-old daughter Blue Ivy.

Left at home were their seven-month-old twins Rumi and Sir.