By Steve Doughty and Mario Ledwith for the Daily Mail

Abuse of non-disclosure agreements to hide sexual harassment will be tackled by the Government – but ministers last night failed to set out a timetable for the plan.

Officials said the promised consultation on the use of such orders would be launched ‘in due course’.

Women and equalities minister Penny Mordaunt said: ‘Sexual harassment at work is illegal, yet this disgusting behaviour is something that many women still experience.

‘It is clearly unacceptable that non-disclosure orders have been used to hide workplace harassment or intimidate victims into silence and we will take the necessary steps to stop this.’

Officials added that the Government’s consultation would cover ‘how to ensure workers understand their rights when they have signed a non-disclosure agreement’.

In the wake of the Philip Green case, a string of MPs have called for changes to ensure that gagging orders – or NDAs – can no longer be used to silence allegations of sexual or racial abuse.

One senior MP said that any orders currently in place should now lose legal force if they were being used to stop workers going public with claims of serious misbehaviour.

Although the injunction covering the Sir Philip allegations was lifted yesterday, the tycoon said the five ex-employees who had signed NDAs were under an ‘obligation’ to honour them.

Yesterday, he faced calls to release his accusers from the controversial agreements, while MPs and lawyers demanded immediate reforms to the orders. Maria Miller, chairman of the influential Commons women and equalities committee, said: ‘NDAs cannot be used to cover up criminal wrongdoing.

‘We should not allow rich individuals to silence employees who have been victims of behaviour that breaks the law.

‘If that is how the law stands, then it is unacceptable. We have heard a mountain of evidence that shows people feel they have no option but to sign NDAs because they feel powerless.’ She added: ‘The Philip Green case shows how broken the current system is. Employers and lawyers need to hear a strong message from Government that this has to change.

‘A good way to start may be to allow NDAs that are currently in force to be set aside if they were not entered into willingly or if they are not in the public interest because they mask any type of unlawful discrimination.’

She was backed by Lord Hain, the former Labour Cabinet minister who originally used Parliamentary privilege to expose Sir Philip as the figure accused of sexual and racial abuse by five employees. 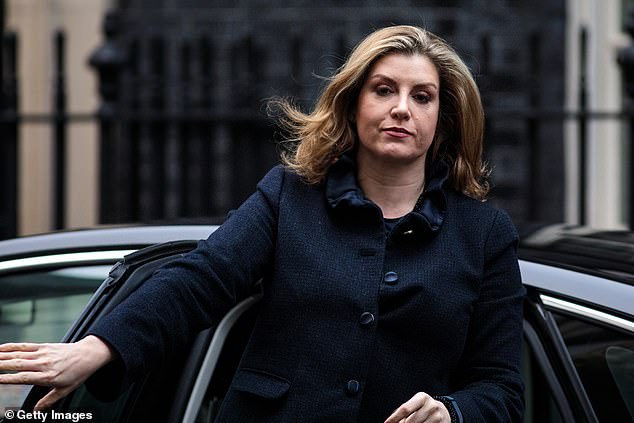 Women and equalities minister Penny Mordaunt said: ‘Sexual harassment at work is illegal, yet this disgusting behaviour is something that many women still experience’

Lord Hain named him in the Lords after appeal judges imposed the injunction protecting him from publicity.

Lord Hain said: ‘The Government must reform the law. Commercial non-disclosure agreements are legitimate in commercial transactions, for example when Jose Mourinho was sacked by Manchester United he agreed not to tell his side in return for a big pay-off. It is entirely wrong to use NDAs to conceal abuse of victims by powerful or rich individuals.

‘That is deploying gagging orders to enforce injustice and the abuse of human rights of ordinary citizens who don’t have the money to fight back.’ Ministers initially promised in December to launch a consultation on the use of NDAs – saying they ‘recognised concern over the unethical use of [them].’

However they said there would be no criminal law against misuse of NDAs, a reform demanded last summer by Mrs Miller’s committee.

There was also widespread support for reform yesterday among backbench MPs. Labour’s John Mann said: ‘People with money will rely on NDAs by definition and that is why I call for the law to change in cases like this. People who sign them, the evidence shows, feel pressured to do so and ought to have the ability to go public. Unease about the use of NDAs was shared among lawyers. The barristers’ regulator, the Bar Standards Board, was poised last autumn to bring in guidance for lawyers banning the use of NDAs to suppress allegations of abuse.

However new rules were held up after appeal judges gave Sir Philip his anonymity last October.

A spokesman for the board said: ‘The BSB’s position in relation to guidance for barristers on the use of non-disclosure agreements will become clear in the next few weeks.’

Dawn Butler, Labour spokesman for women and equalities, said: ‘I want to pay tribute to survivors of sexual abuse and harassment, who are too often silenced and cannot command an army of lawyers to fight their corner.

‘NDAs should never be used to suppress allegations of criminal behaviour. The next Labour government will review the statute book to ensure that the law protects the voices of survivors.’