Women have flocked to nail salons for manicures and pedicures while others have enjoyed the sunshine with a day at the park as coronavirus restrictions continue to ease across Queensland.

Almost every seat was taken at salons in Brisbane on Saturday morning, as customers deprived of professional nail care since the country went into lockdown on March 25 rushed in for a touch-up.

Beauty and nail salons can open for a maximum of ten people at a time while home opens and auctions can resume along with general retail.

Cafes, public parks and playgrounds also buzzed with activity as Queenslanders headed outside to embrace the sunshine. 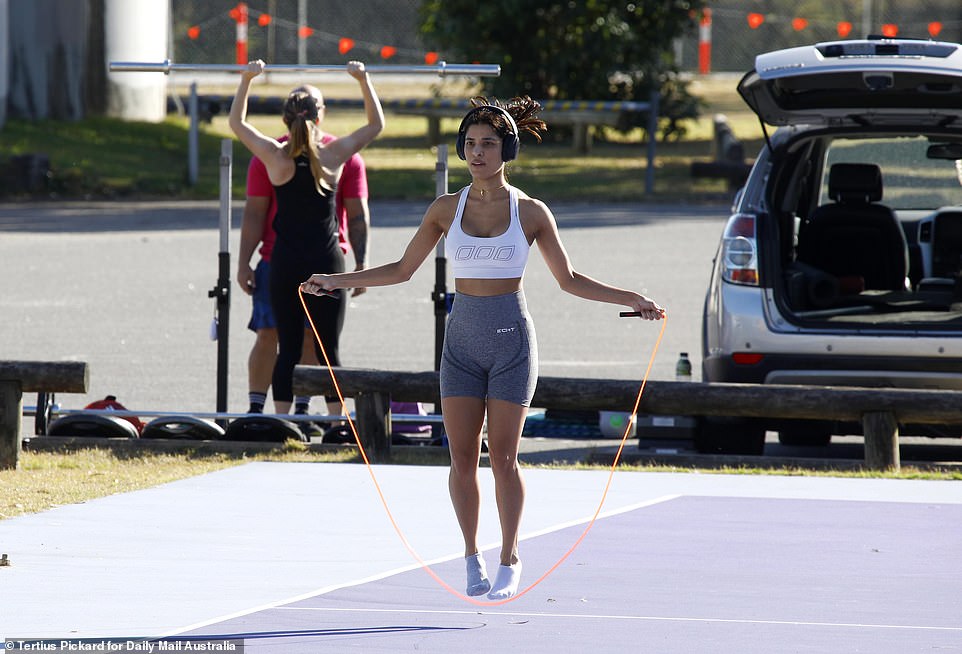 Cafes, public parks and playgrounds also buzzed with activity as Queenslanders headed outside to embrace the sunshine 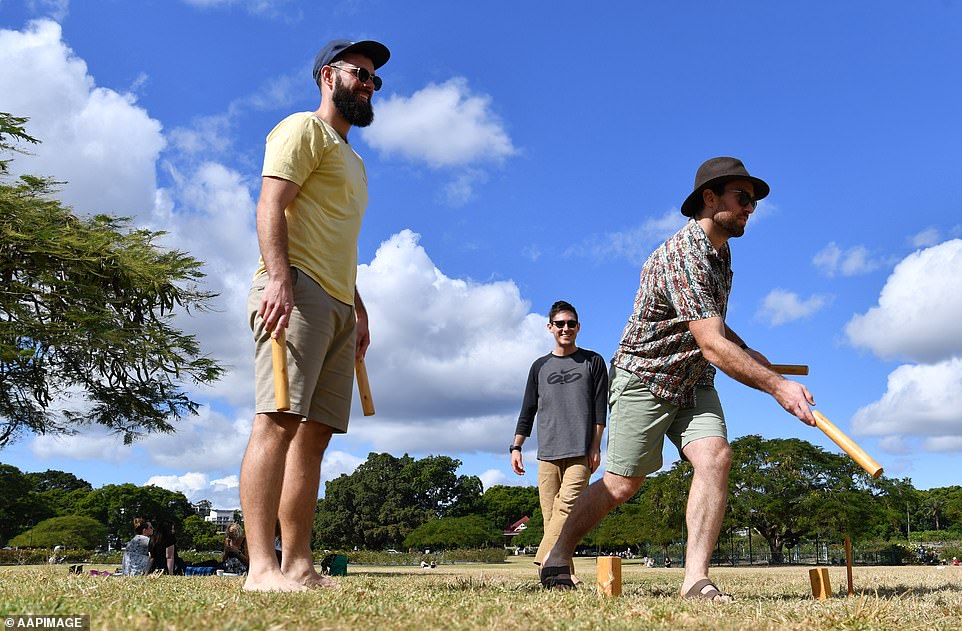 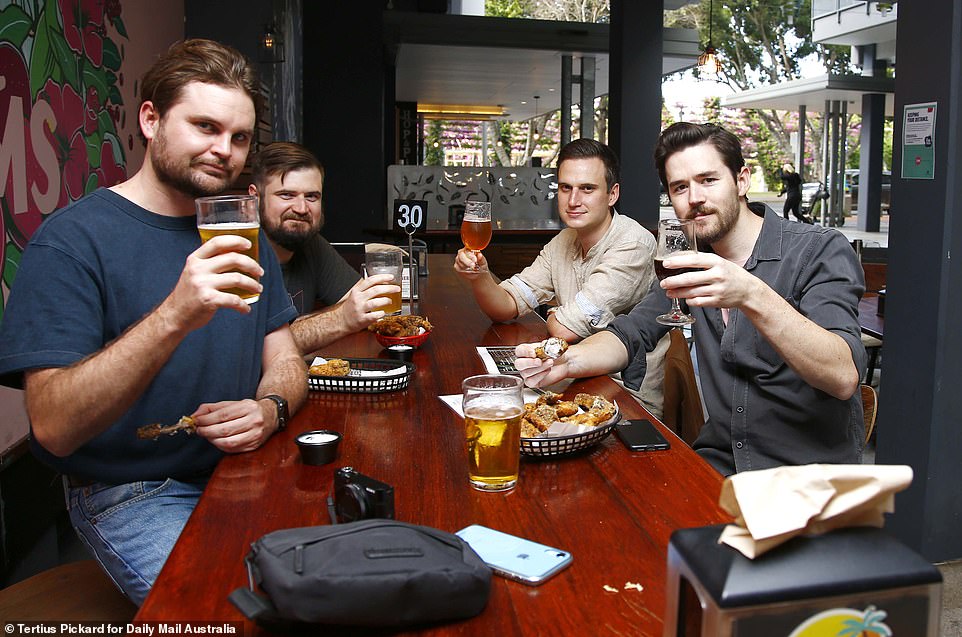 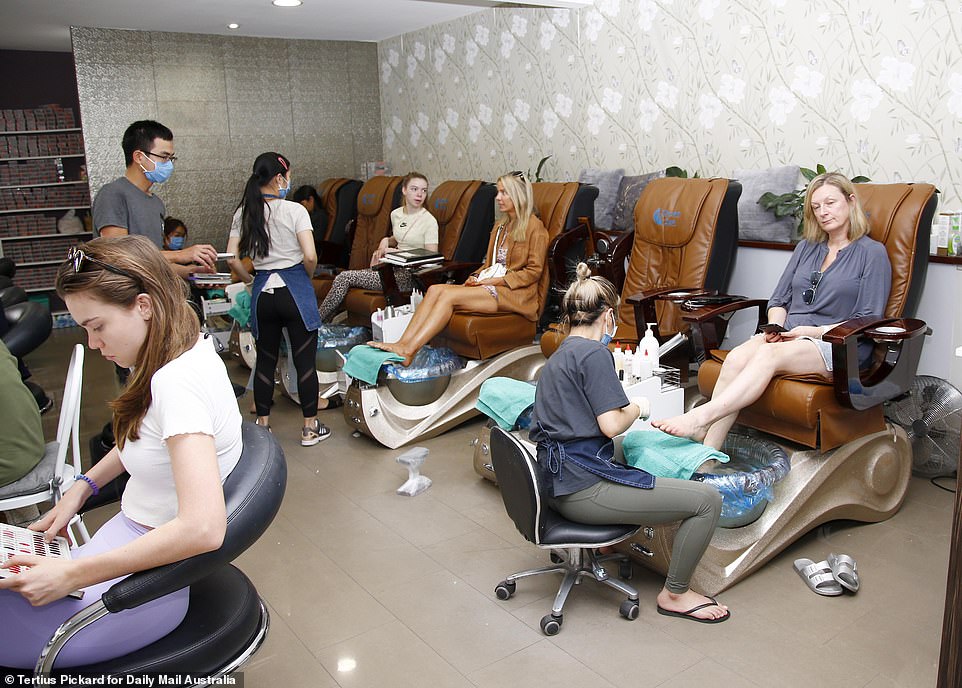 All hands on deck: Customers outnumbered staff at one Brisbane nail salon as woman rushed to revamp their nails after weeks in isolation 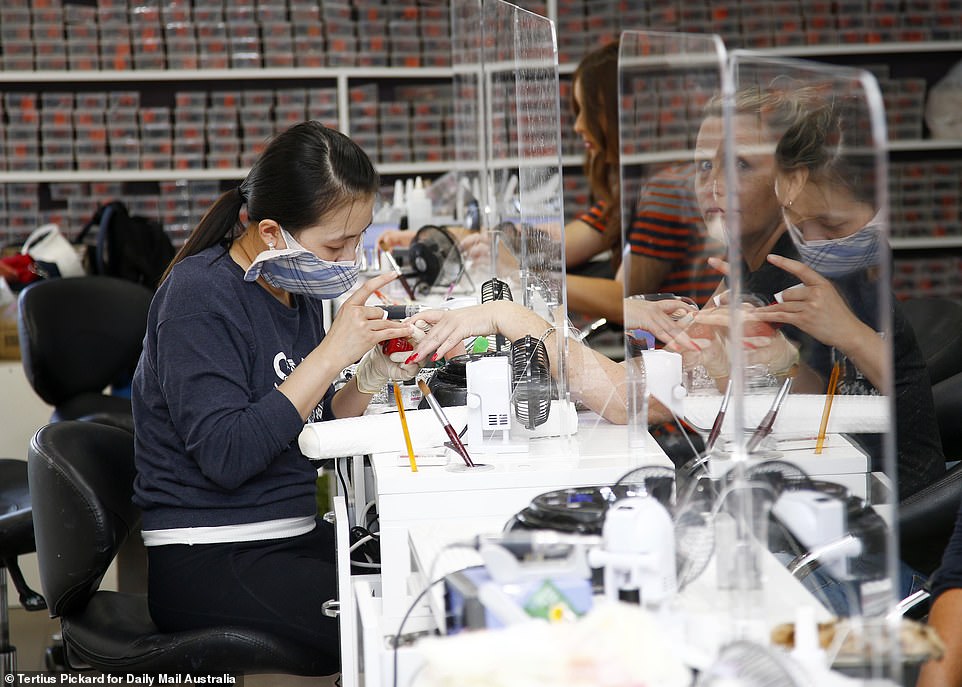 To reduce the risk of contracting coronavirus, some salons have erected plastic screens between employees and customers 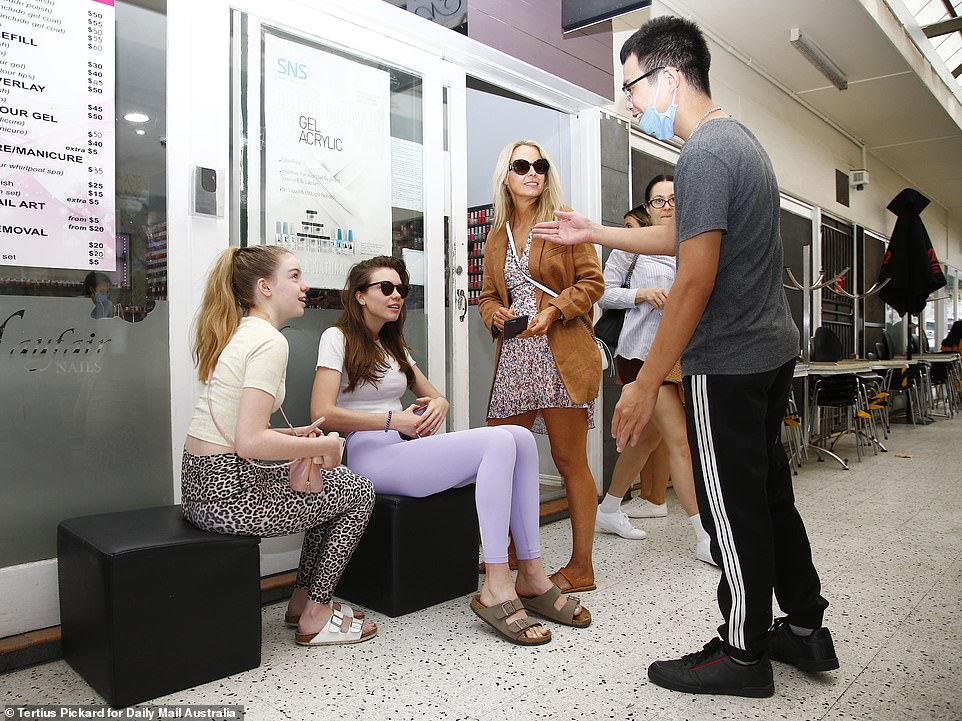 Full capacity: An employee welcomes women waiting outside a Brisbane nail salon to come inside as another customer leaces

Restaurants and cafes can now have up to 10 people dine-in, while groups of 10 can congregate outside for recreational purposes as the state emerges from isolation.

‘It is great to see some familiar faces returning,’ Coffee Club manager Kaili Yang told AAP as she took orders from a pair of jovial regular customers at their favourite table.

The Brisbane cafe in the leafy inner-city suburb of Ascot was among the many that opened their doors to customers on Saturday. 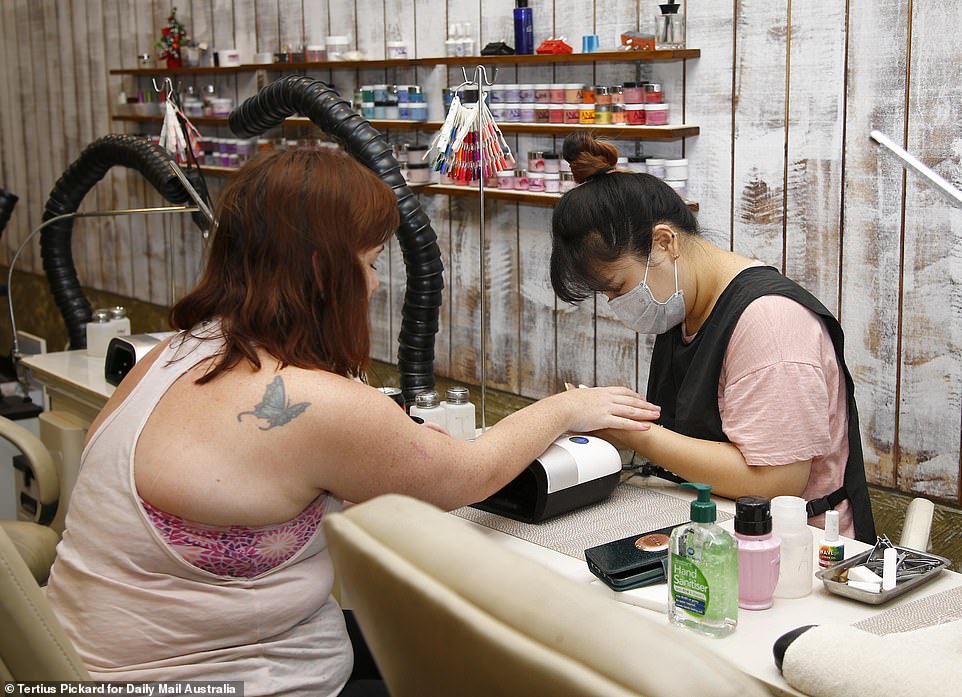 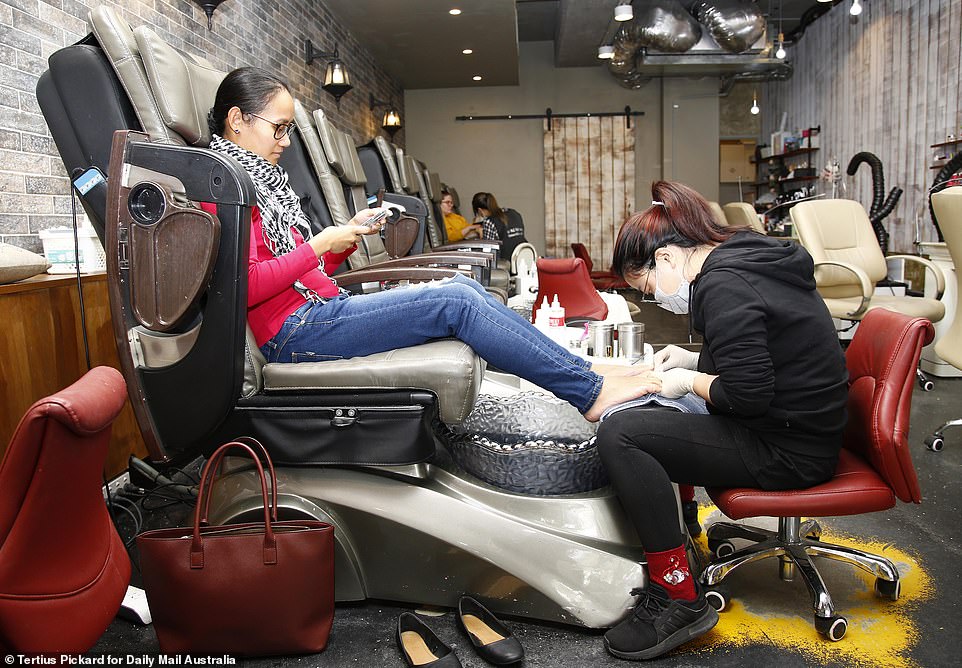 One woman appeared relaxed, gazing at her phone, while a professional nail artist pampered her feet 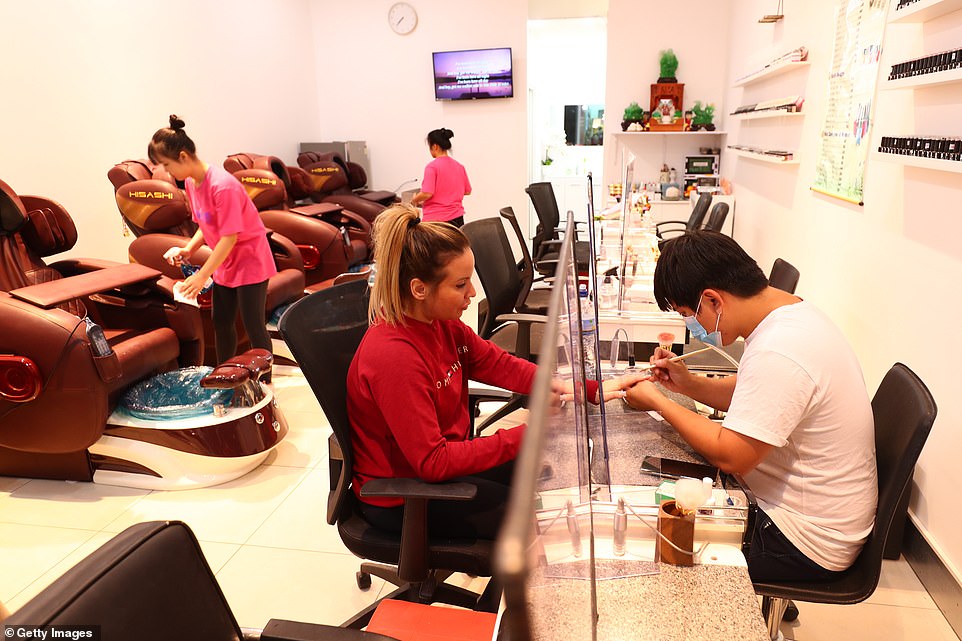 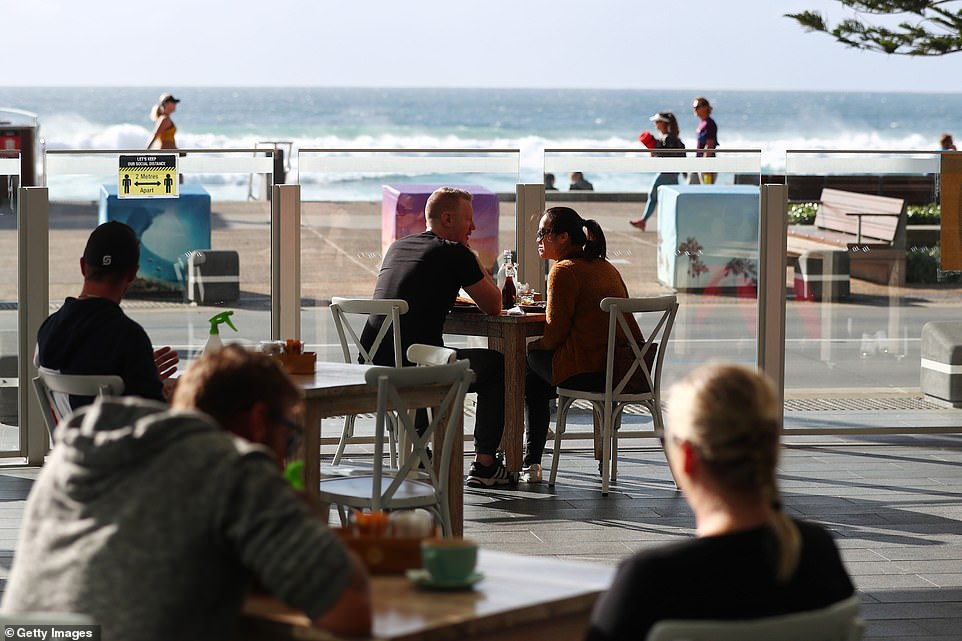 ‘It’s awesome to be back together again feeding off each other’s energy,” he said of the six people he had just finished training.

Many families are also out and about as children clamber into playgrounds that had also been closed to control the spread of the virus.

‘She is loving it,’ mother-of-two Jo Williams said as she pushed her four-year-old daughter Hannah on a swing in the same park. 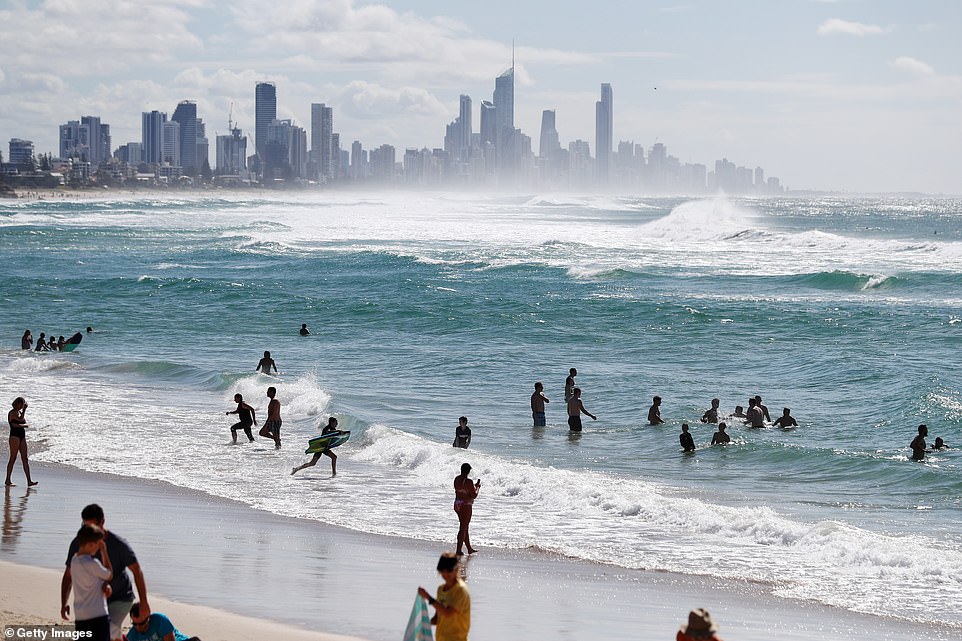 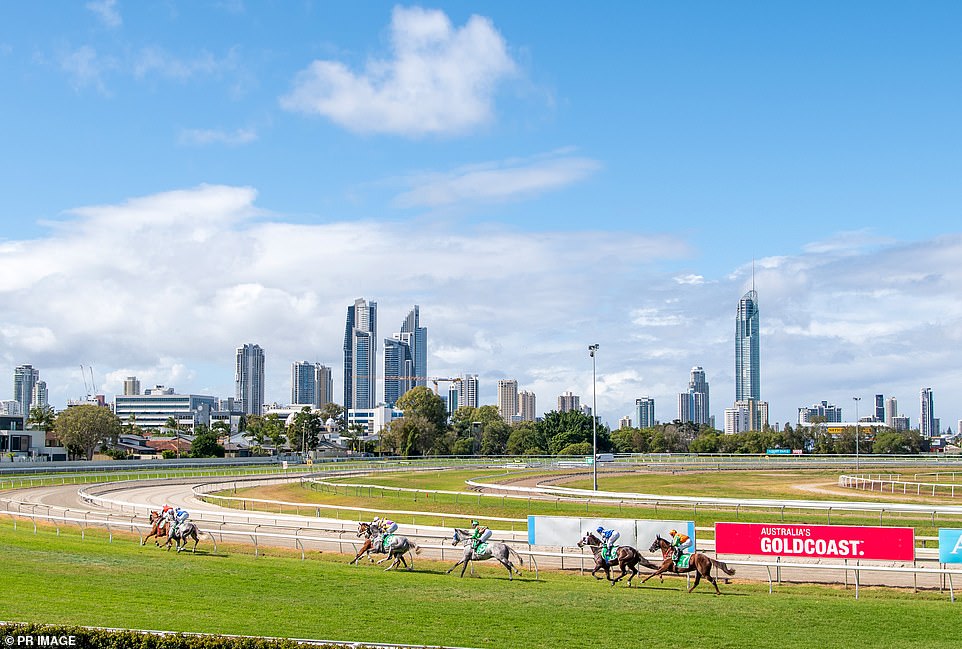 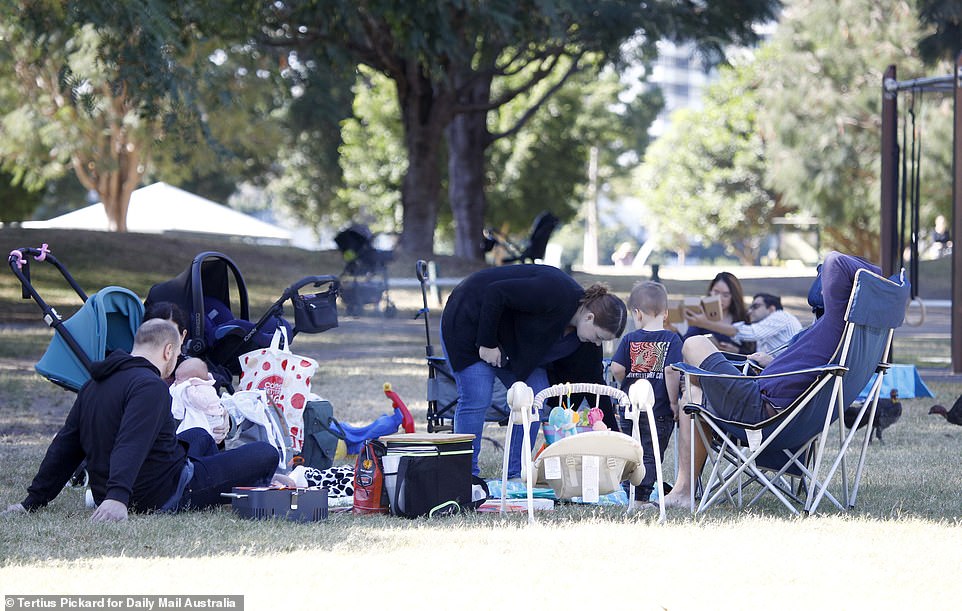 ‘Both the kids have missed the outdoor activity and interacting with children.’

A maximum of 10 people can now also attend a wedding, while up to 20 are permitted at indoor funerals, and 30 at those held outside.

Road trips are also back on the agenda with residents allowed to travel up to 150km from home, increasing to 500km for those in the outback. 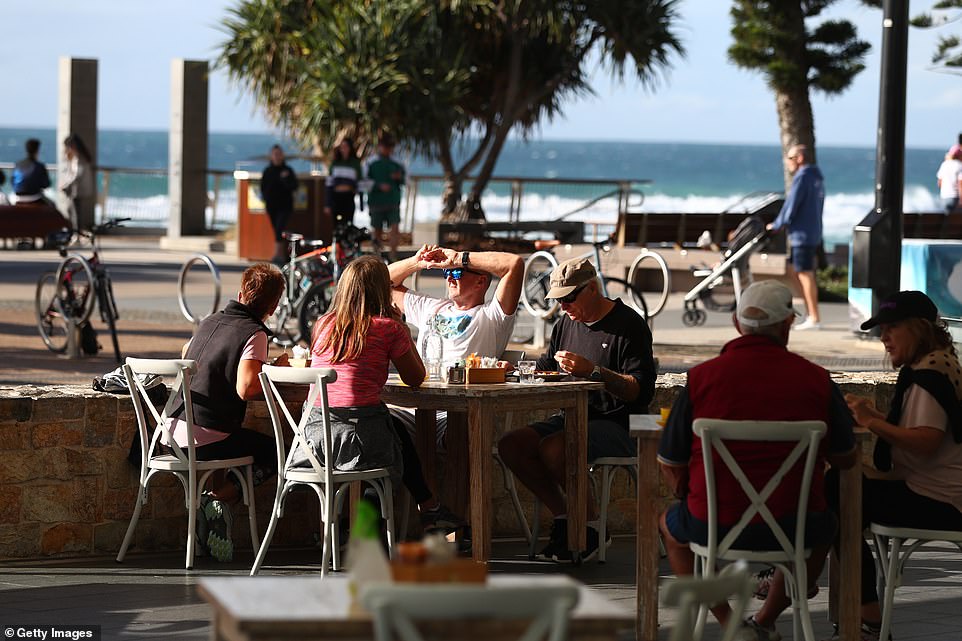 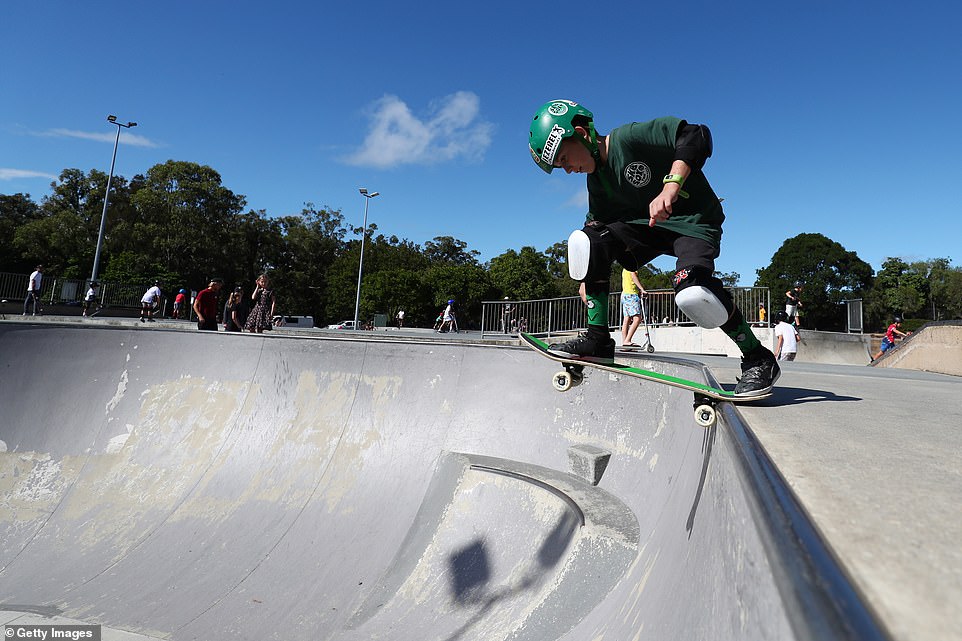 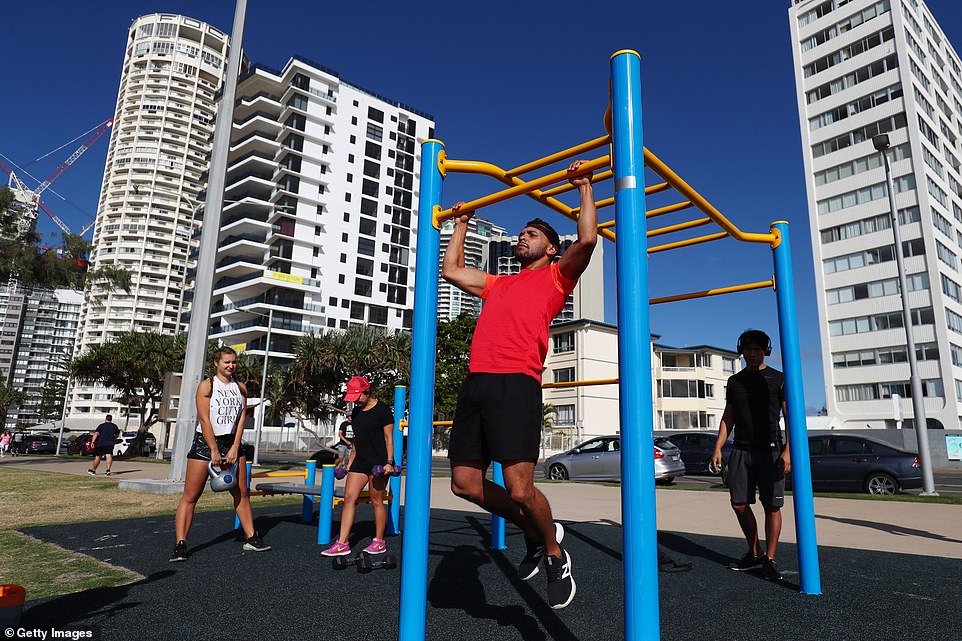 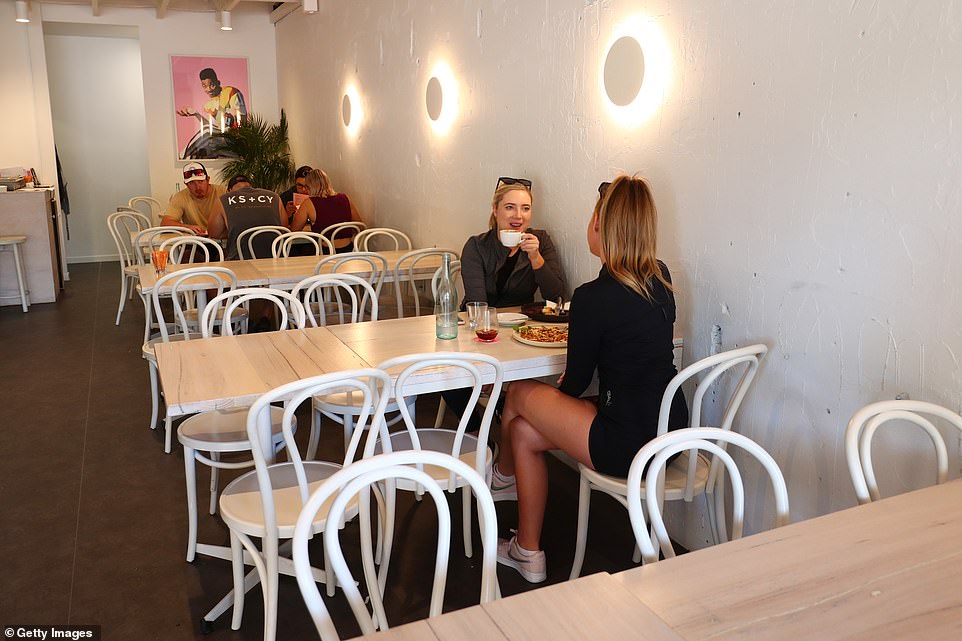 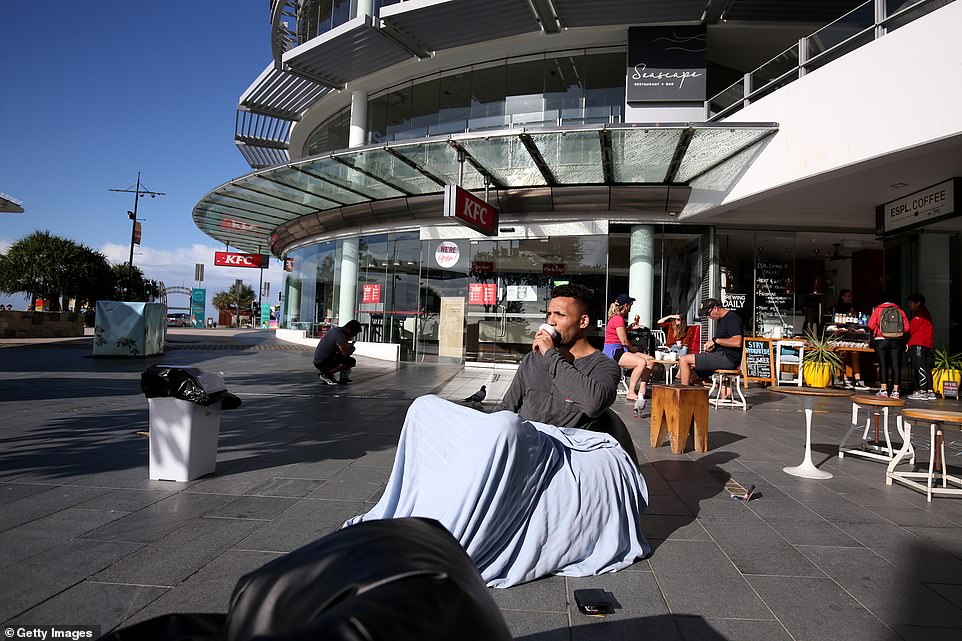 It comes as the state recorded just one new COVID-19 case overnight after a passenger from the Coral Princess cruise ship tested positive. It brings the total number of cases diagnosed to 1055.

Just 13 remain active, five of these are in hospital with three in intensive care. Six Queenslanders have died from coronavirus.

Health minister Steven Miles said the continued low number of new cases, which were mostly people returning from overseas, suggested the first round of easing on social distancing measures two weeks ago had not led to increased transmission of the virus. 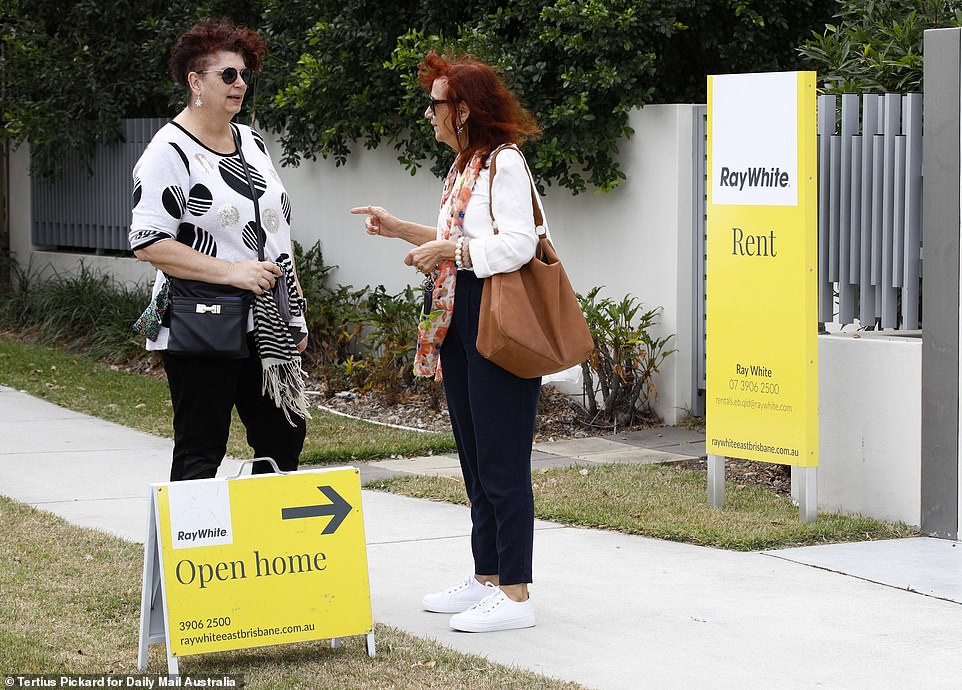 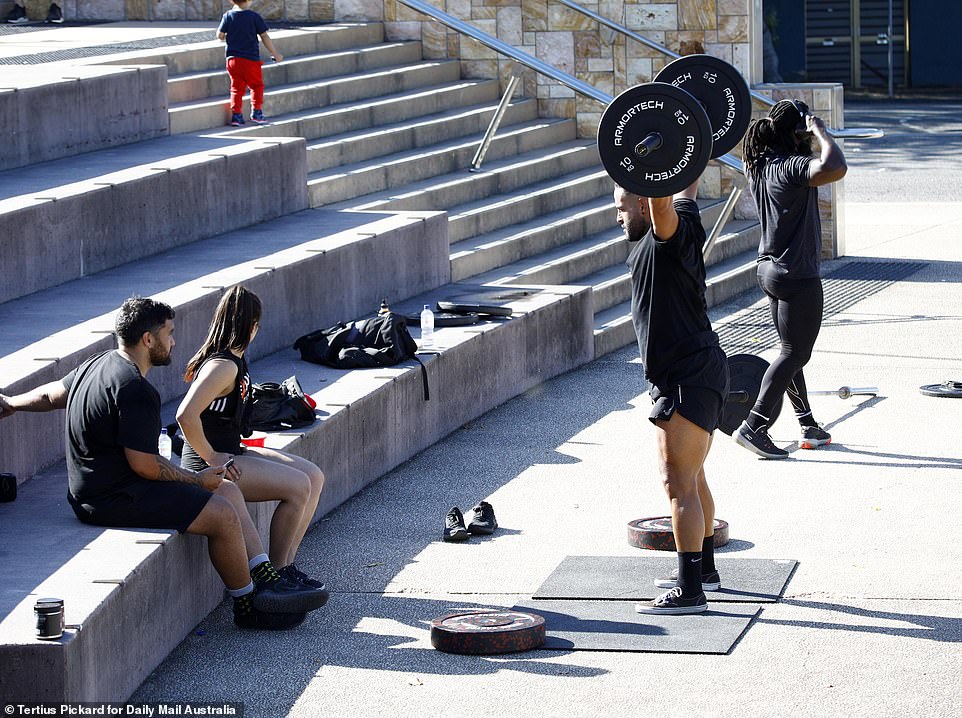 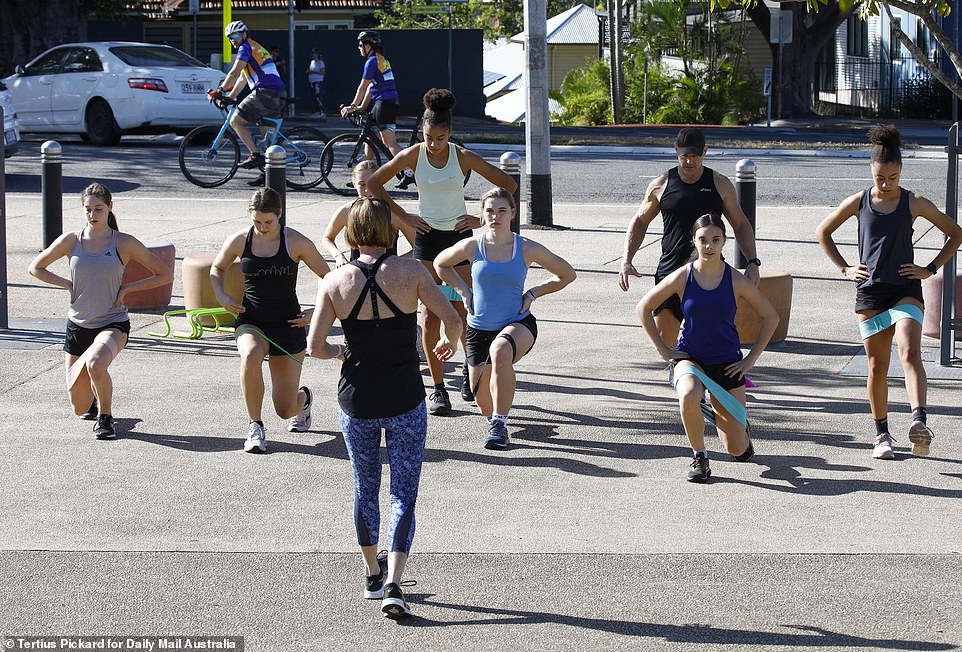 ‘That gives us great confidence going into today,’ he told reporters.

Meanwhile, 193 people have been tested for COVID-19 in central Queensland after a nurse working at a Rockhampton aged care facility was diagnosed with the disease on Friday.

All have returned negative results, including 114 residents at the North Rockhampton Nursing Centre, where the nurse worked. 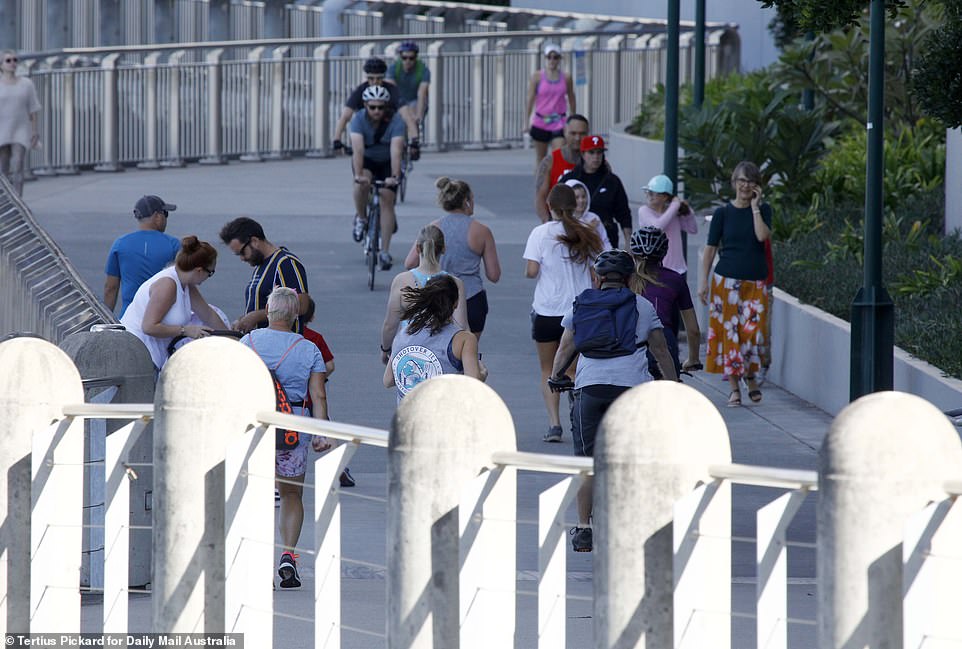 Cyclists, joggers and families all flooded out off their homes after being ordered to stay inside unless essential  for eight weeks 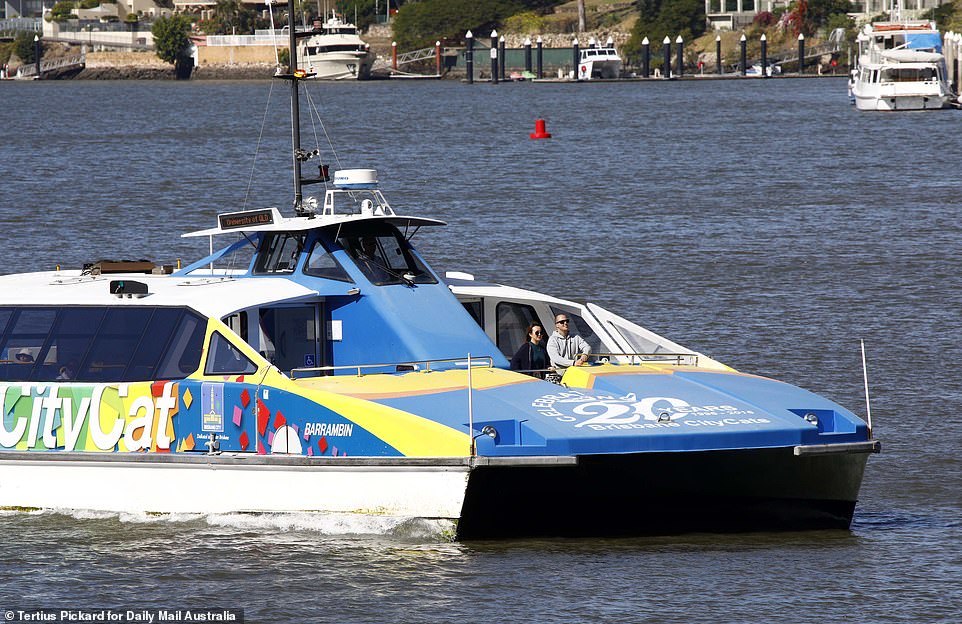 Mr Miles said it was the best result that could have been hoped for but work continues at the facility to reduce the risk of the virus spreading.

She said the eased social distancing restrictions could allow the virus to spread more easily in the community.

‘Which is why we must all – all 5.1 million Queenslanders – must every morning when they get up to think, have they got any symptoms,’ she said.

‘If you do, stay home and go and get tested.’ 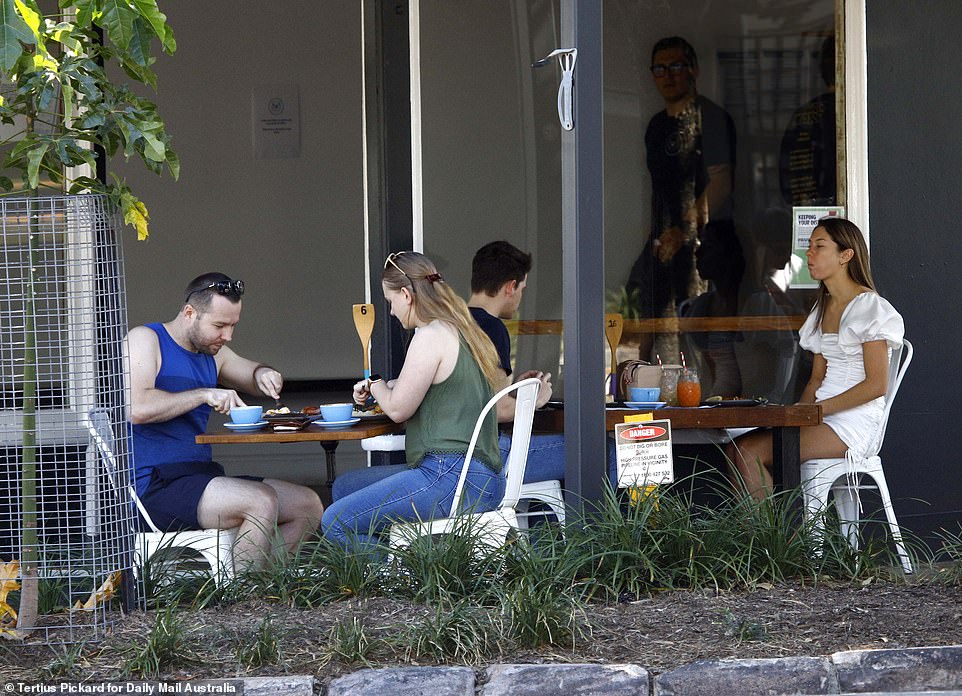 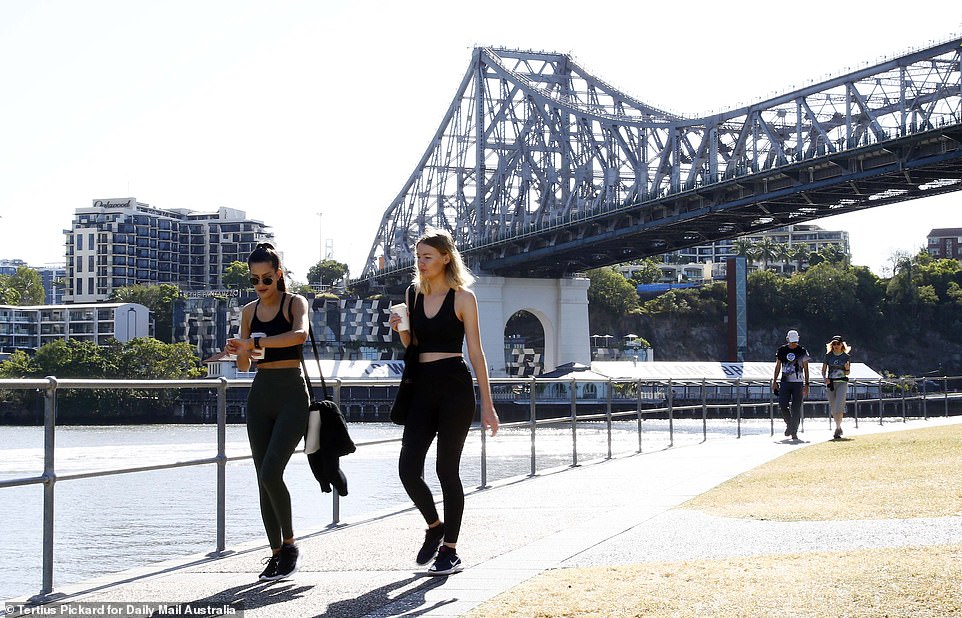