The number of British women undergoing an ‘extreme’ tummy tuck identical to the one former Emmerdale actress Lisa Riley opted for has doubled in the last five years, claim experts.

They have blamed the trend on soaring obesity levels and a dramatic increase in the number of weight loss operations carried out by the NHS.

The fleur de lis type of procedure is reserved for those who experience extreme weight loss, because it gets rid of more excess skin and fat than the standard abdominoplasty.

And it appears some may also have been inspired by star Lisa who revealed in August she had 1.5 stone of saggy skin cut away using this method after shedding 12 stone.

After transforming herself form a size 28 to a svelte size 12, instead of being left with the body of her dreams, Lisa, 41, spoke out about feeling repulsed by the painful folds of skin she was left with.

Nearly a third of the world’s population is now overweight or obese, according to World Health Organisation figures.

MailOnline reported earlier this year there has been a 500% increase over a decade in obesity surgery, including gastric bypass and gastric band operations. 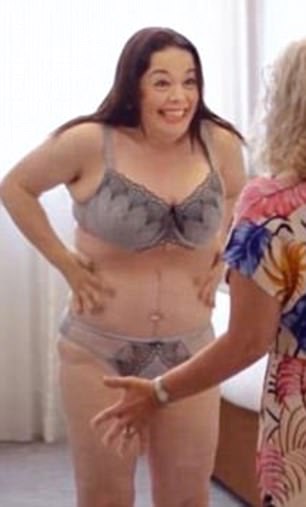 And women have three times as many operations as men – even though they are no more likely to be obese.

There were 6,438 gastric bypass and gastric band operations performed on the NHS in 2015/16.

Some 5,020 were carried out on women last year compared with just 1,418 on men – but obesity rates for both sexes are about 27 per cent.

The availability of ‘bariatric’ procedures on the NHS is controversial, particularly at a time when cancer drugs and hip and knee replacements are rationed.

The classic, standard abdominoplasty involves a horizontal cut made in a patient’s stomach before excess fat is removed. But a fleur de lis type, which costs £8,000-£10,000, is more complex, requiring two incisions – one vertically and one horizontally.

Plastic surgeon Gary Ross who runs a clinic in Manchester said he performed on average one fleur de lis a month in 2012 when it was a ‘niche procedure’ and says he now carries out ‘at least’ two a month. This year, he is on course to perform around 30.

He said the rise in gastric bypass and band surgery could be behind the trend for extreme tummy tucks.

‘The rise of bariatric procedures being carried out is very likely to be linked to the rise in this type of extreme tummy tuck.

‘I would never wish to discourage people from having procedures like gastric bands, because the effects on patient health can be truly life-changing.

‘But patients also need to be made aware of the effects of extreme weight loss on their bodies, besides an overall improvement in health levels.

‘The problem of loose skin arises during rapid weight loss – and it can be exactly the same for someone who’s either lost it naturally through diet and exercise, or for a patient who’s had a gastric band fitted.’

‘I HATED THE WAY I LOOKED’

One of Mr Ross’s clients who has had the same tummy tuck as Lisa Riley, is Claire M, a 55-year-old from Cheadle, Greater Manchester.

She had the procedure in July this year after losing an astonishing 9.5 stone in the space of 20 months.

The mother-of-two grown sons credits hypnotherapy with helping her shift the weight. 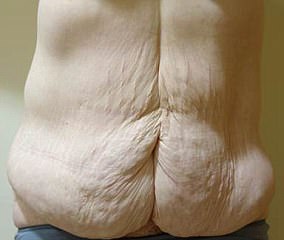 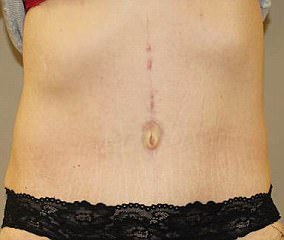 The patient, known as Claire M, had a fleur de lis procedure after losing 9.5 stone

And while Claire, a primary school worker, was initially delighted with her new frame, she was horrified by the excess skin she was left with.

She said: ‘Everyone encourages you to lose weight, but no-one prepares you for what happens to your body when you shed such large amounts of it.

‘After my weight loss, I ended up with vast rolls of excess skin around my tummy and large, loose bags under my arms.

‘I was happy I was now a healthy weight, but hated the way I looked.

‘On the face of it, in clothes, you look really good. But underneath your dress, you look awful. 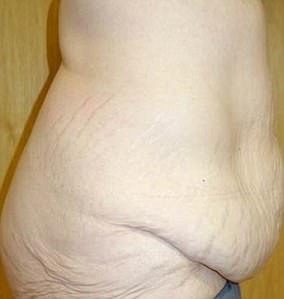 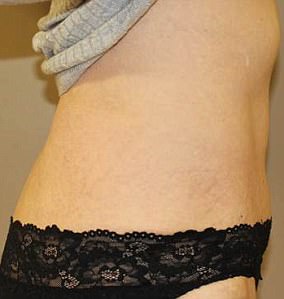 Claire described the operation as a ‘life changing experience’

‘And people aren’t prepared for it when they see you going swimming – you can feel their eyes on you.

‘In the darkest times you’re thinking, “it’d be better if I just piled the pounds back on and went back to looking how I did – it’s got to be better than this?”

She says she was also shocked to discover that the NHS refused to fund her operation.

‘It’s not their fault, and they can’t pay for everything, but I definitely felt very frustrated. In the end I knew I had to pay privately to get the body I wanted.’

The cost of the operation – £10,000 – was a large sum of money for her and her husband, but she now says: ‘It’s made such a difference to my self esteem.

‘And in practical terms my life is infinitely better, too, not having to worry about what to wear or how awkward and uncomfortable I’m going to feel.

Abdominoplasty is the removal of excess skin and fat from the abdomen (belly) and tightening of the abdominal muscles. There are 3 main types:

Fleur de lis abdominoplasty is used when patients have lost an extreme amount of weight and have a severe cases of excess skin and fat.

As well as having a horizontal scar you’d get with a regular abdominoplasty, this also leads to a vertical scar.

It is called the fleur de lis as the pattern of excision resembles the stylised lily flower found in heraldry.

Official figures from British Association of Aesthetic Plastic Surgeons (BAAPS) show all abdominoplasty procedures fell by 7.5 per cent from 2,989 in 2012 to 2763 in 2016.

However, surprisingly, there was a large rise of 47 per cent of the number of men having a tummy tuck last year.

Mr Ross’s reports suggest however that fleur de lis is on the rise. But BAAPS data is not broken down by type of tummy tuck so it’s not possible to determine the total number of fleur de lis operations performed nationally.

Mr Ross explained that extreme weight gain and loss can cause the skin to lose its elasticity.

‘Underneath your skin there’s two layers – “adipose”, or fat, followed by muscle tissue beneath.

‘When you gain weight, your skin’s surface area has to increase to accommodate the new fat tissue.

‘When you lose that weight, your fat cells shrink. If you lose weight rapidly, and are operating at a more extreme calorie deficit, you also start to lose muscle mass.

‘That combination of both fat and muscle loss creates a void underneath the skin and it loses its elasticity, sometimes hanging down like an apron from their lower abdomen. This can chafe and cause real suffering for the patient.’

Mr Ross said that you can minimise the effects by losing weight more gradually while also aiming to keep your muscle mass through exercise.

‘For others, however, weight loss surgery and body contouring procedures may be necessary,’ he said. 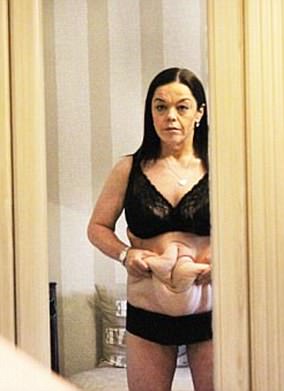 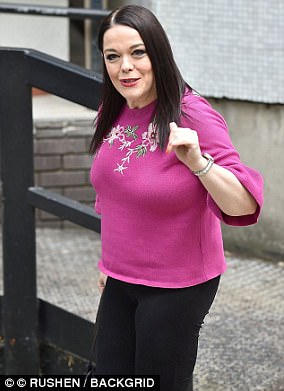 Despite being thrilled with her 12 stone weight loss, Lisa Riley was shocked when she was left with over a stone of unsightly, painful loose skin and 60 stretch marks

She shed a mind-blowing 12 stone after putting herself on a strict diet and gruelling exercise regime for 18 months.

But after transforming herself form a size 28 to a svelte size 12, instead of being left with the body of her dreams, Lisa Riley revealed she faced another self-esteem battle.

She spoke out about being left ‘repulsive’ and painful folds of skin, weighing more than 1.5 stone.

Speaking in her documentary Lisa’s Baggy Body club, the former Emmerdale actress said: ‘I feel like a balloon that’s had all its helium taken out.’

So the 41-year-old undertook the tough decision to have four life changing surgeries – a fleur de lis tummy tuck, surgery to remove the loose skin from her thighs, a boob lift and the removal of her ‘bingo wings’.

Despite the tummy tuck leaving her with vertical and ­horizontal scars, Lisa admitted it was worth it to get rid of the saggy skin.

‘People used to say, “Oh, it is amazing how much weight you have lost.” she told The Mirror.

‘But they had no idea what was going on under my clothes. I used to tuck all the rolls of skin into my tights and underwear, I was very good at hiding it.

‘I had more than 60 stretch marks, so what are a few scars? I do not care about my scars at all.

‘I am proud of them. I am happy to show them. I couldn’t be happier about my body now if I tried.’