Women prefer men with muscular shoulders and torsos – but only if they’re TALL, study claims

While the ‘dad bod’ was once seen as the most attractive physique for men, a new study suggests that that may no longer be the case.

Research has revealed that men who want to be seen as better looking should build up muscle around the pecs and biceps – although it might not work if they’re short.

According to experts, a higher ‘shoulder-to-hip ratio’ (SHR) – where there’s a bigger circumference around the shoulders than there is around the waist – is a mark of attractiveness.

However, men who aren’t very tall may not be able to change a woman’s perception of how attractive they are – even with a lot of built-up muscle, the study suggests.

Building up muscle around the pecs and biceps can help men boost their level of attractiveness – as long as they’re tall. It’s less likely to work for men who are shorter, according to the new study (file photo)

A higher SHR means there’s a bigger circumference around the shoulders than the waist.

For men, the ideal SHR is 1.6, meaning the circumference of the shoulders is 1.6 times the waist circumference.

A SHR below 1.6 can either suggest the waist is bigger than it should be, or shoulders are narrower than they should be, or a combination of both.

The new study was led by experts at the University of British Columbia and published in Archives of Sexual Behavior.

The experts say high SHR is a ‘sexually dimorphic trait’, meaning it’s predominantly seen in men rather than in women as a way to attract the opposite sex.

‘Our results showed that women’s perceptions of males attractiveness, masculinity, and fighting ability were influenced by, and interacted with, height and SHR,’ lead author Farid Pazhoohi told PsyPost.

‘In general women preferred taller and broader shouldered men – in particular when these two traits were presented in combination (or interacted together).’

Pazhoohi and colleagues wanted to see how different heights and SHRs in men would affect how attractive they were perceived to be by women.

In particular, they wanted to see how the two factors of height and SHR would interact and affect each other.

‘For example, would the impact of a high SHR be the same on a short man as a tall man, or would its effect decline (or increase?) as men became shorter,’ the researchers wrote in their paper.

To find out, the team recruited 659 heterosexual women in the US, all between the ages of 18 and 83 years.

Participants were tasked with viewing images of male bodies with heights ranging from 5 feet 3 inches (160cm) to 6 feet 3 inches (190cm), and three degrees of SHR (‘small’, ‘intermediate’ and ‘large’).

Rather than being shown men in the flesh, the participants were shown illustrations of men, either in silhouette or more detailed colour renders, next to a female figure for comparison. 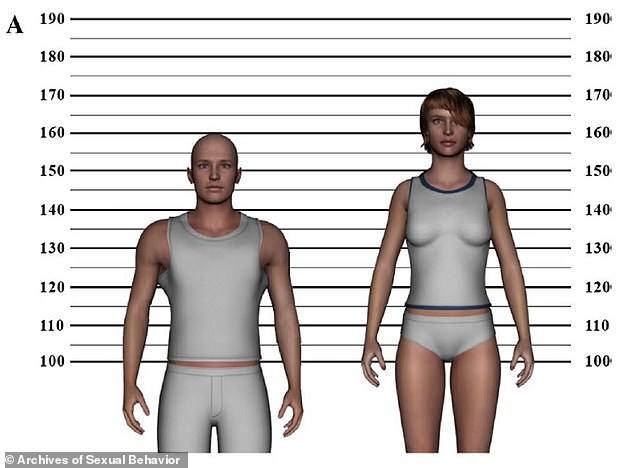 Participants were tasked with viewing images of male bodies with heights ranging from 5 feet 3 inches to 6 feet 3 inches, and three degrees of SHR (‘small’, ‘intermediate’ and ‘large’). Pictured, a male with a height of 160cm (5 feet 3 inches) but with a higher SHR 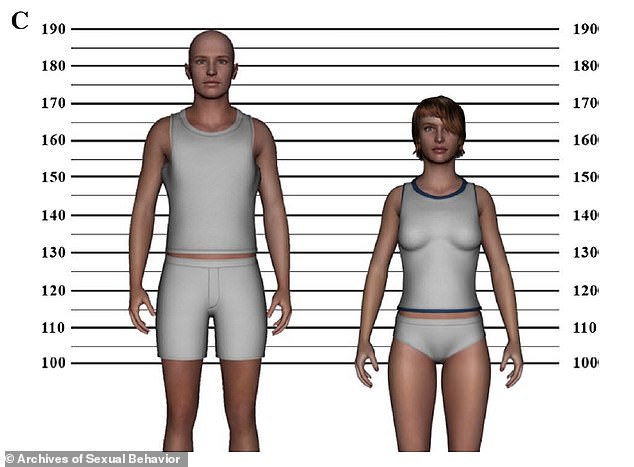 Pictured, a male with a height of 190cm (6 feet 3 inches) but with a lower SHR. The male figures were shown next to a female for comparison

What is sexual dimorphism?

Some animals show high levels of sexual dimorphism – meaning they show big differences in their physical characteristics aside from their sexual organs – partly to attract mates.

For example, in peacocks, males are normally brightly-coloured with large lustrous tail feathers, compared with the female, which has more subdued colouration.

Other examples of sexual dimorphism include antlers that are largely only found in male deer and the striking mane of the male lion.

In humans, women are drawn to dimorphic traits such as larger upper bodies, taller heights and beardedness.

Each participant was then asked to rate each figure’s attractiveness, masculinity and fighting ability.

Overall, the participants considered taller men and men with larger SHR as more attractive, masculine and better in terms of their fighting ability.

The effect of height on attractiveness was more complicated, however.

Male bodies with higher SHRs (more muscle around the shoulders) were considered more attractive on taller men, but less so when on shorter men.

In other words, it’s less of a guarantee that short men will be deemed attractive, even when they have a lot of upper body muscle.

Results support the widely-held belief that height is an important factor for women when choosing a man – and for a man when trying to attract a woman.

According to a 2002 study, taller men are more successful in acquiring long-term partners than shorter men.

It’s already thought a man’s height is a signal of ‘biological quality’, linked to increased fitness, health and attractiveness in prior studies.

In terms of women’s attractiveness as perceived by men, the equivalent is something called the ‘waist-to-hip ratio’ (WHR), calculated by dividing the circumference of the waist by that of the hips. 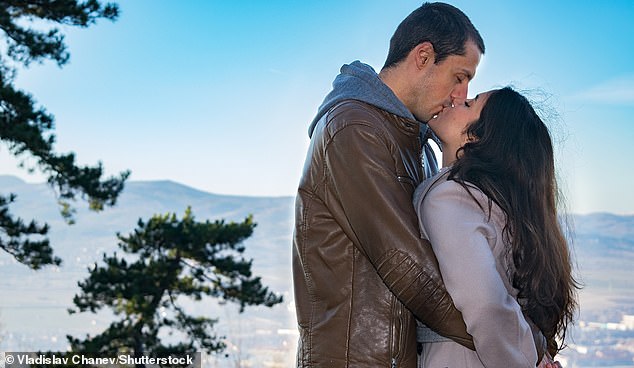 Men are biologically hardwired to find a lower WHR – where the woman’s waist is significantly narrower than her hips – more attractive.

A higher WHR on the other hand, where the width of the waist matches or even exceeds that of the hip, is an indicator of obesity or ill health.

This pose, known as the Contrapposto, is frequently used by celebrities on Instagram or while posing on the red carpet to increase perceived sexiness.

Contrapposto IS the ultimate way to look good on Instagram: Stance used by Michelangelo, Da Vinci and the Kardashians is scientifically proven to be more appealing

Scientists have detailed on why the contrapposto pose is so frequently adopted by celebrities, models and students on a night out.

From Kim Kardashian to Antoni Porowski, celebrities on the red carpet are naturally inclined to pull the contrapposto, which involves shifting most of your weight to one foot so that one hip points upwards.

The pose accentuates curviness and reduces the hip-to-waist ratio of one side of the body. 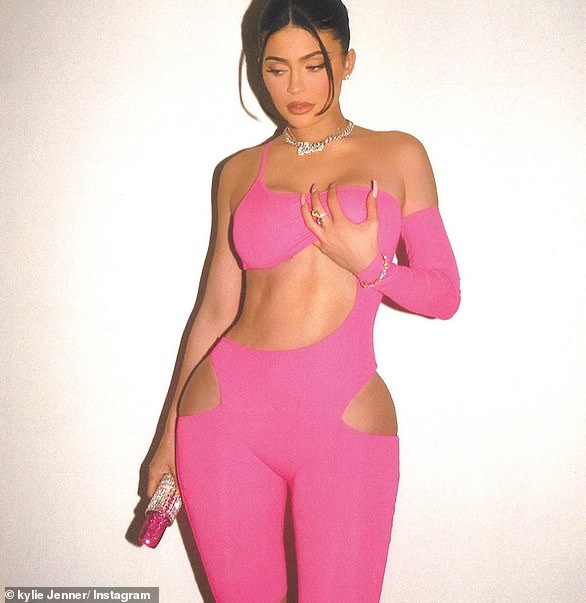 The so-called contrapposto pose – which shifts weight onto one foot so one hip points upwards – does draw the eye. Pictured, Kylie Jenner

In the eyes of members of the opposite sex, it has always been seen as an indicator of health, youthfulness and reproductive potential.

Now, scientists have detailed why so many of us are naturally inclined to pull the pose without even thinking.

‘We think that artists have intuitively figured out that this posture is more attractive, and applied it in their artistic endeavours,’ said Dr Farid Pazhoohi, now based at the University of British Columbia, Canada, as quoted by the Guardian.

To test the theory that the pose draws more attention, Dr Farid Pazhoohi and his team created 3D avatars of a woman both standing up straight and in the contrapposto pose.

The team showed the images to 68 heterosexual university students (25 men and 43 women).

Participants were found to spend more time looking at the side with the lower hip-to-waist ratio – in other words, the side of the body with the hip pointed upwards.

This was the case when the avatar was viewed from multiple different angles – front-on view, back view and diagonally.

Therefore, adopting the contrapposto pose, and the contrast between one side of the body and the other side, makes a woman draw more attention and stand out from the crowd.

Interestingly, when the avatars were standing straight, participants’ eye movements were drawn more centrally, to the groin area.