Group of women are driven out of hotel pool by crowd chanting ‘shame!’ after they ‘berated lesbian couple for kissing in front of children’

A group of women were driven out of a hotel pool in California after they berated a lesbian couple for kissing in front of children.

The dramatic showdown erupted on Sunday at the Kimpton Sawyer Hotel when the squad of about five women confronted the couple and were then met with backlash from horrified onlookers.

Viral video showed fellow sunbathers chanting ‘shame’ at the women as they gathered their belongings and stormed away.

But the women didn’t go quietly – two of them stopping to hit back at the angry crowd.

Tensions flared at a hotel pool in Sacramento, California, after a group of women confronted a black lesbian couple for kissing while there were children present. The aftermath of the incident, which occurred at the Kimpton Sawyer Hotel, was caught in a video that went viral 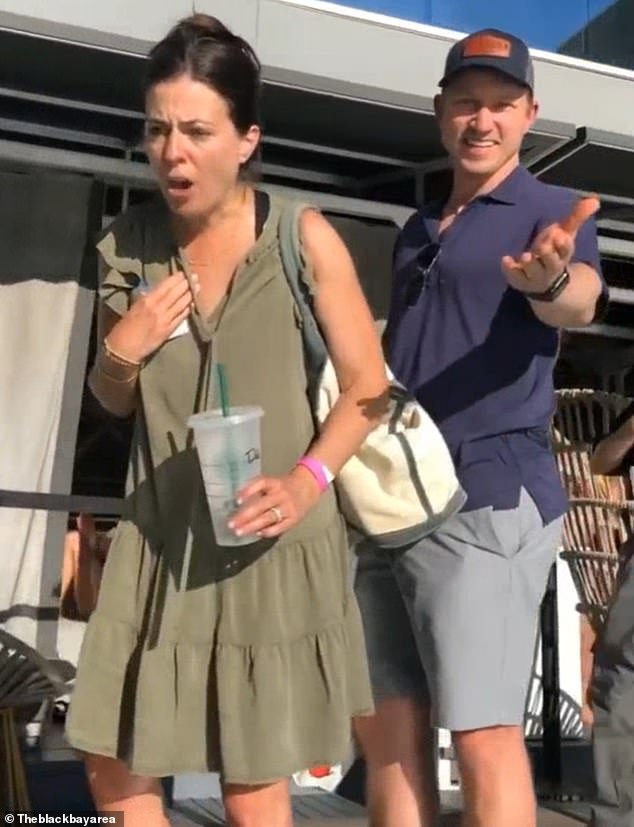 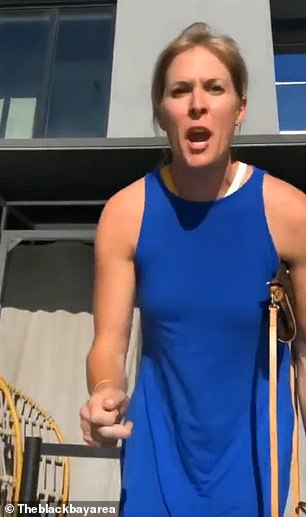 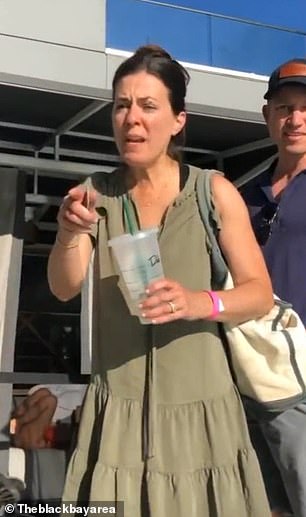 Video shared on social media showed the women shouting expletives at bystanders who attacked them for their comments to the lesbian couple. One of the women (right) was heard telling the man filming: ‘Do you guys have children? Because you’d be a f*****g terrible dad’ 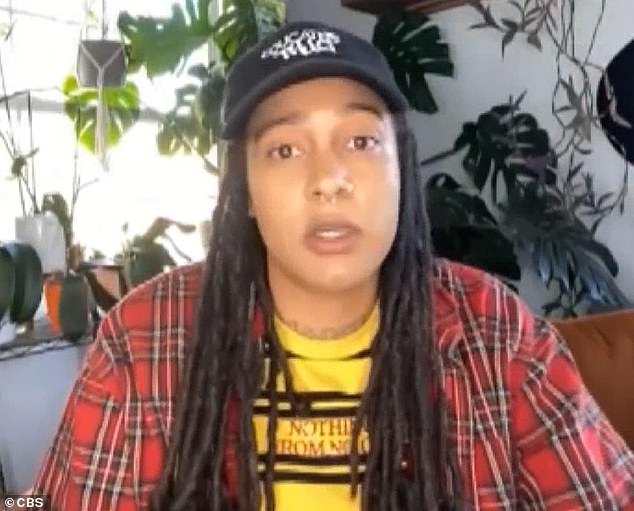 A few of the women are seen hurriedly leaving, but one confronted the bystanders and gave the middle finger to the camera before another delivered an expletive-ridden rant.

‘Do you guys have children?’ she asks one bystander before adding, ‘Because you’d be a f*****g terrible dad.’

The two began exchanging more insults before the woman says, ‘You’re a f*****g loser,’ and storms off.

Many on Twitter likened the scene to the gif-famous ‘walk of shame’ taken by Cersei Lannister in the fifth season of Game of Thrones.

A non-identified spokesman for the women told Fox40 that they were not concerned with the couple’s sexual orientation, but reacted because they were engaged in ‘what appeared to be sexual intercourse and inappropriate activity in close proximity of children’.

‘When members of the party politely and respectfully asked that some of the sexual activity be toned down because children were close by in the pool, they were met with aggressive verbal attacks,’ the spokesman said in a statement. 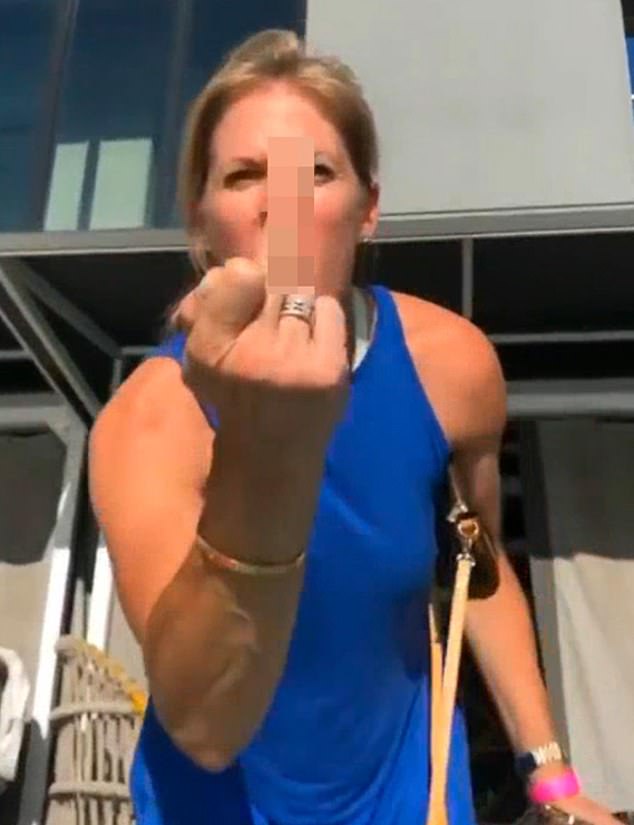 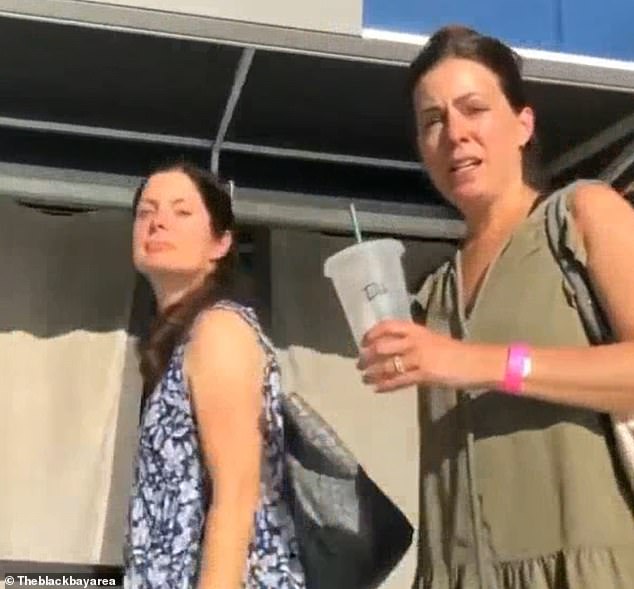 A non-identified spokesman for the women told Fox40 that they were not concerned with the couple’s sexual orientation, but reacted because they were engaged in ‘what appeared to be sexual intercourse and inappropriate activity in close proximity of children’ 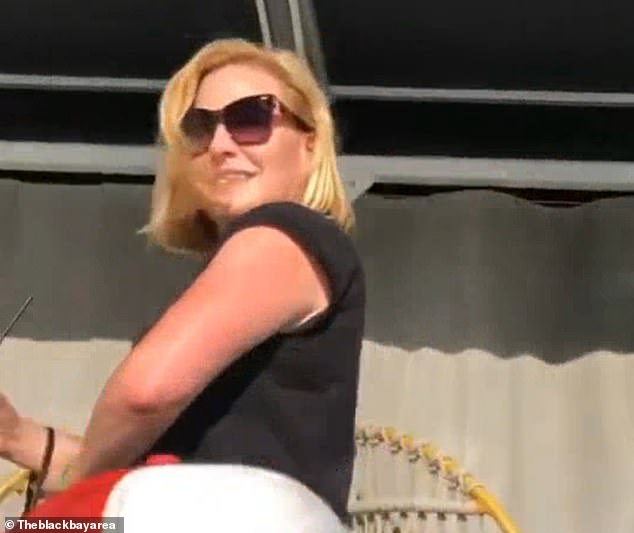 However, Dominique Veasley, of the lesbian couple, told KPIX that there were other couples engaged in public displays of affection at the same time, but the women in the video only confronted her and her partner.

‘My, you know, initial reaction for the children was, oh, yeah,’ she said. ‘And then I was just like, wait, you’re asking me to stop being me.’

In a statement following the incident, Sawyer General Manager Nikki Carlson said, ‘The Sawyer does not condone discrimination or verbal assault of any kind.

‘An unfortunate disagreement between guests occurred at our pool over the holiday weekend and the matter has since been resolved.’

The Kimpton has been a long-time supporter of the LGBTQ+ community and just recently posted several messages celebrating Pride month on its Twitter and the main page of its website.

‘Since our founding in San Francisco over three decades ago, in 1981, we’ve embraced the LGBTQ community and have made a commitment to helping affect positive change by partnering with organizations that can make a difference; like The Trevor Project,’ reads a post on its website.

The Kimpton is a Premier National Hotel Partner of the Trevor Project and donates $10 for each night booked at one of their hotels when guests use the code TRPR. 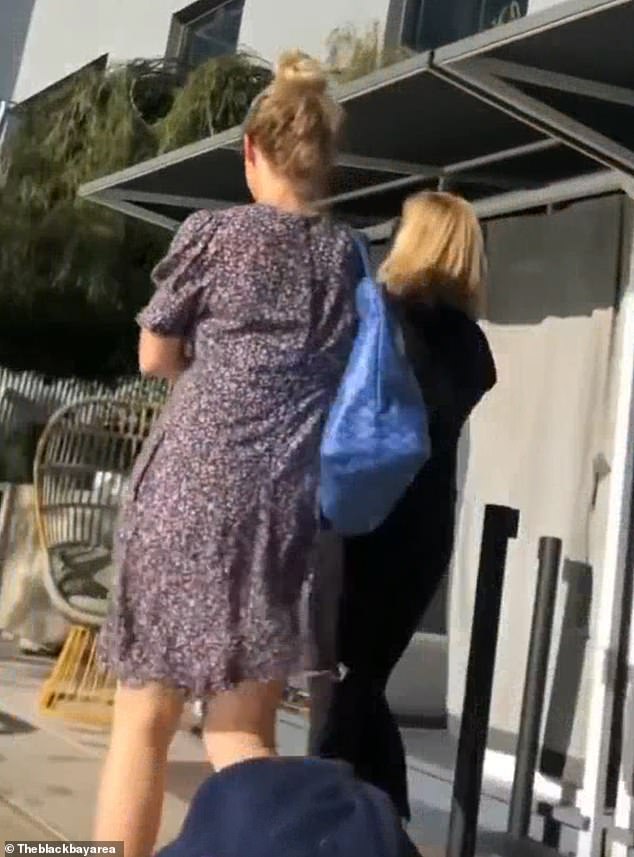 Two of the so-called Karens are seen walking out of the pool are amid ‘shame!’ chants