It seems toilet humor never ceases to amuse no matter how old you get – unless of course you are unlucky enough to be the butt of the bathroom joke.

But one group of women is embracing their most embarrassing bathroom tales as part of a hilarious new campaign that aims to put end to the idea that ladies shouldn’t discuss their pooping habits – and flush away the illusion that females don’t poop at all.

In a series of entertaining videos made by bathroom fragrance company Poo-Pourri, one woman admitted to actually pooping in her mother-in-law’s bed, while another explained the moment she lost her bowel movements in an elevator of her office building.

Hilarious: During a campaign about women pooping, a female named Maryann (pictured) detailed how she ‘sharted’ in her boyfriend’s mom’s bed while sick 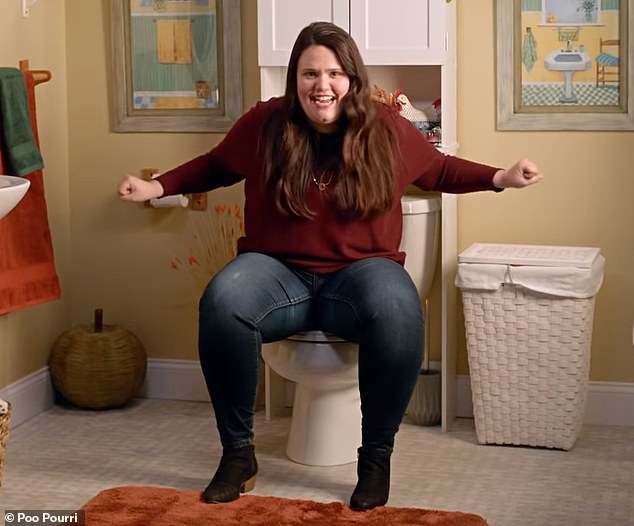 Unfortunate: Luckily, she was dating a man who was willing to hide the sheets with her so the mom would never find out about the incident 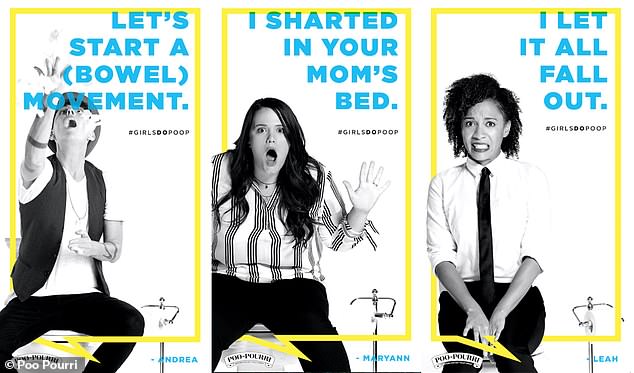 Funny: Maryann’s story and others are part of Poo-Pourri’s newest campaign to break the stereotype about women pooping

Poo-Pourri, a brand which first made headlines five years ago when it debuted a viral video entitled ‘Girls Don’t Poop’ viral video, shared the side-splittingly funny confessionals as part of its latest campaign, #GirlsDoPoop, which puts an incredibly honest and frank spin on the idea of women going number two.

The first lady to take her place on the porcelain throne and share her best bathroom story is Maryann, who at the time of her toilet tale was dating her now-husband, got invited to attend a Thanksgiving dinner with him at his family home in Connecticut.

‘I wake up at 3am with terrible stomach pain,’ Maryann said about her trip to visiting the family during her campaign video. ‘I try really quick to make a fecal escape plan.’

After Maryann does her business in one of two bathrooms in her then-boyfriend’s family home, she heads back up to bed believing her stomach pain is done.

Her mother-in-law offered to let her take a nap in her own bed that next morning because Maryann was still feeling sick and it would be closer to the bathroom.

‘I’m dozing in and out of sleep…I just let out a fart,’ she described during the video. ‘It was not a fart. Oh no. I sharted in her bed.’

Maryann than hilariously describes how she and her significant other worked together to hide the sheets so the mother-in-law would never know she accidentally pooped the bed while sick.

‘I’m just saying, if a guy helps you hide your sharted sheets, you should marry him,’ Maryann said at the end of her shocking tale.

Other women besides Maryann also shared their own poop stories in quick two-minute videos.

Leah, who works as a cater waiter for what she described as ‘posh’ events, explained one gathering she worked that had a number of Secret Service agents in attendance. 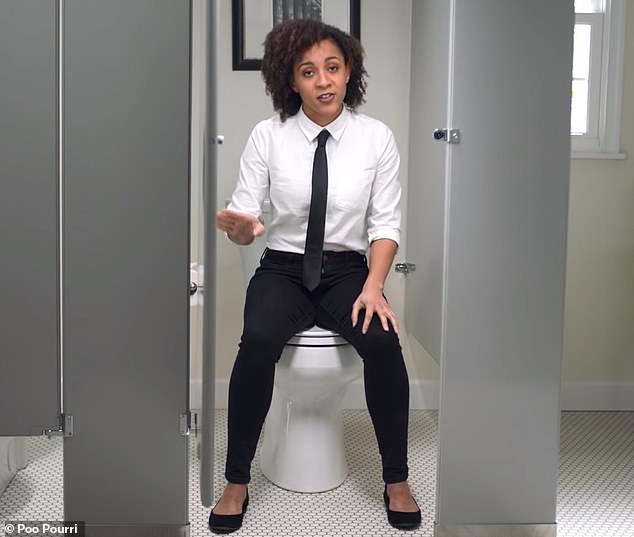 Bonding: One woman who worked as a cater waiter detailed how she had to quickly go to the bathroom during a high-profiled event because she had to poop 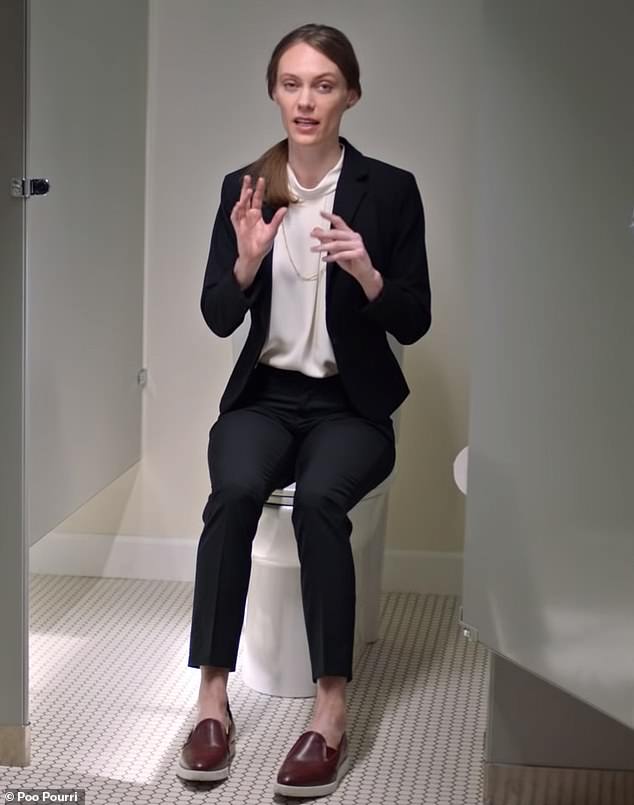 Time to go: Another woman named Kelly detailed how Mexican food got the best of her one day during work, and she pooped her pants on the way to the bathroom 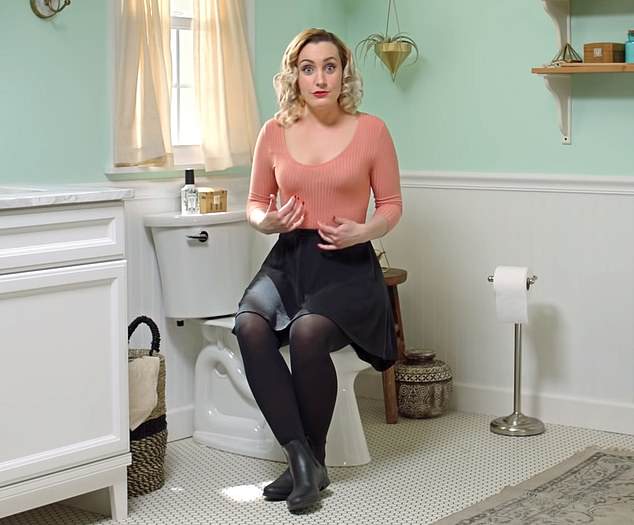 Horrifying: Caroline was attempting to leave the home of the family she nannied when she was unable to stop her bowel movements

Since she previously worked a late night, Leah decided to get the biggest cup of coffee possible to make it through her next shift with the company.

‘I am feeling super awake, but I realized I am also super gassy,’ Leah admitted.

To prevent any incident from occurring while serving people salad, the woman decided to discard her tray and make a beeline towards the bathroom. But she quickly realizes that her behavior encouraged a Secret Service agent to follow her.

‘It’s a massacre and I know the entire time I’m going this poor Secret Service member is listening to the entire thing,’ Leah hilariously said about the moment in the bathroom stall.

Once Leah came in contact with the member while leaving the stall, all she could say was ‘thank you for your service’ before quickly heading back to work to serve the rest of the food.

The funny stories only continue as a woman named Kelly detailed how Mexican food in New York City did her dirty while she was on her way to her ‘secret pooping’ bathroom in her office building.

While in the elevator heading up to the floor where she could poop, Kelly recalled feeling like she was going to ‘s**t her pants’ as she descended up. And that’s exactly what happened.

‘I usually give myself enough time but that day I underestimated the power of the beans,’ Kelly revealed.

Once she made it to the bathroom, she was able to dispose of her soiled underwear before heading to a drugstore commando to buy another pair.

In another campaign video, a woman named Caroline revealed a particularly horrifying story of when she pooped herself while driving. 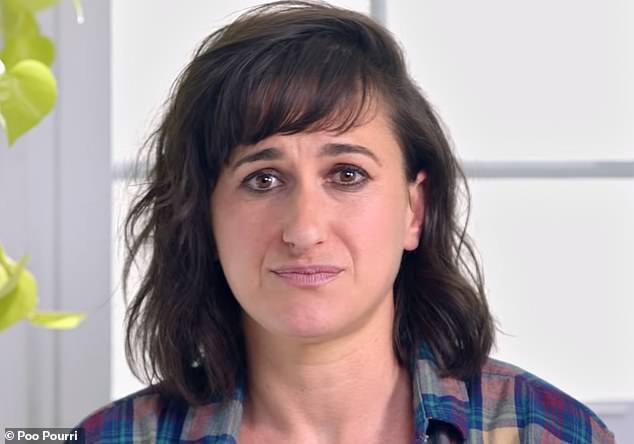 Shocking: In another hilarious video, a woman details an incident where she pooped in a mixing bowl to avoid going number two in front of the man she slept with the previous night 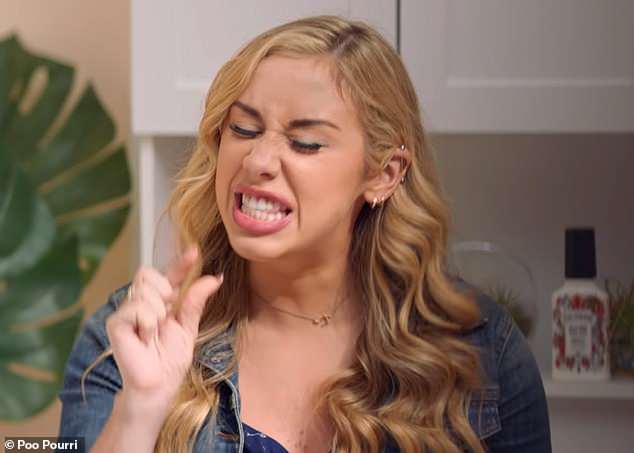 Not strong enough: The final campaign video talks about how a woman named Hannah pooped in her stairwell at her apartment building because she couldn’t make it

‘While I’m driving I remember thinking “what does a person sitting in her own s*** listen to?”‘ Caroline asked.

The incident happened after Caroline consumed a smoothie that had a double helping of chia seeds. While attempting to escape the home of her nannying gig, bad things happened and Caroline ended up pooping her pants.

In another relatable story, a woman named Hanna details how she didn’t want to poop in the home of a man she had spent the night with because of the idea that females never should have bowel movements.

While the man was in the shower, Hannah suddenly felt like she immediately needed to poop but does not want to do it while he was also in the bathroom. So instead she decided to poop into a mixing bowl.

Hannah then never heard from the man again after he left the apartment.

The final story for Poo-Pourri’s campaign detailed when a woman named Brittany returned from a trip with her then-boyfriend and decided to get an iced coffee at the airport.

While in a cab, she admitted to her boyfriend that she might ‘crap her pants’ because of how intensely she had to poop.

‘With all of my core strength, I am holding my buttcheeks together,’ Brittany said.

She ended up pooping her pants while walking up the stairs to her apartment to the horror of her neighbors.

Poo-Pourri, which sells odor products for instances of going number two, shared these six women’s hilariously horrifying poop stories in an appeal to end the stigma about females talking about their bowel movements.