Cardiovascular disease is the number one cause of death for women, even in those with breast cancer.

It kills one in three women a year, compared to one in four men.

New research published in the journal Circulation revealed women are more likely to suffer from heart complications than men.

These findings build upon previous research that have shown women are more likely to develop and die from heart disease than their counterparts, and yet the symptoms are even harder to spot.

Unlike men, women often suffer jaw pain and upper back pressure during a cardiac event – something which can often be dismissed as a symptom of something else.

Now, Daily Mail Online is telling the stories of four women who’s suffered various heart complications as experts warn heart disease is harder to spot in women despite it being more common.

Thirty-two-year-old Jen Hyde had a heart valve replacement at 25 years old, after developing a type of hypertension that affected her heart and lungs

REVEALED: THE EASY-TO-MISS SYMPTOMS WOMEN SUFFER FROM A HEART ATTACK

Many women don’t suffer the classic symptoms of heart attack as men such as the gripping chest pain and discomfort.

They are more likely to experience subtler, less recognizable symptoms.

This includes shortness of breath, nausea and pain or discomfort in the stomach, jaw, neck or back.

Women may also experience dizziness, fainting, upper back pressure and extreme fatigue, according to experts at the American Heart Association.

Jen Hyde had a heart valve replacement at the age of 25 after developing hypertension that affected her heart and lungs.

The 32-year-old, of Brooklyn, New York, was diagnosed with pulmonary hypertension, a condition where the heart is working too hard to pump blood into the lungs to pick up oxygen, during a doctor’s visit in December 2009.

However, she hadn’t noticed any symptoms of the condition, which includes shortness of breath, dizziness and chest pressure.

She underwent heart valve replacement in July 2010. Recovery was slow, as she learned to listen to her body’s cues to avoid getting overtired.

Jen had her first heart surgery at three years old after being born with tralogy of Fallot – a congenital defect in which the heart doesn’t pump adequate blood to the lungs before circulating it through the body,

Jen currently has a bioprosthetic valve, but will one day need a transcatheter aortic valve replacement (TAVR).

‘I can’t help my condition, but I can make good lifestyle choices,’ she said. ‘The stronger my heart is, the longer my heart valve will last.’

She now eats a healthy diet, limiting alcohol and sodium – the American Heart Association recommends an ideal of less than 1,500 milligrams per day for most adults, especially for those with high blood pressure.

She is also getting  exercising moderately – which can range from brisk walking, swimming to mowing the lawn – to help her condition without overworking her heart.

Suffered two strokes at 27 years old, 10 days after the birth of her third child 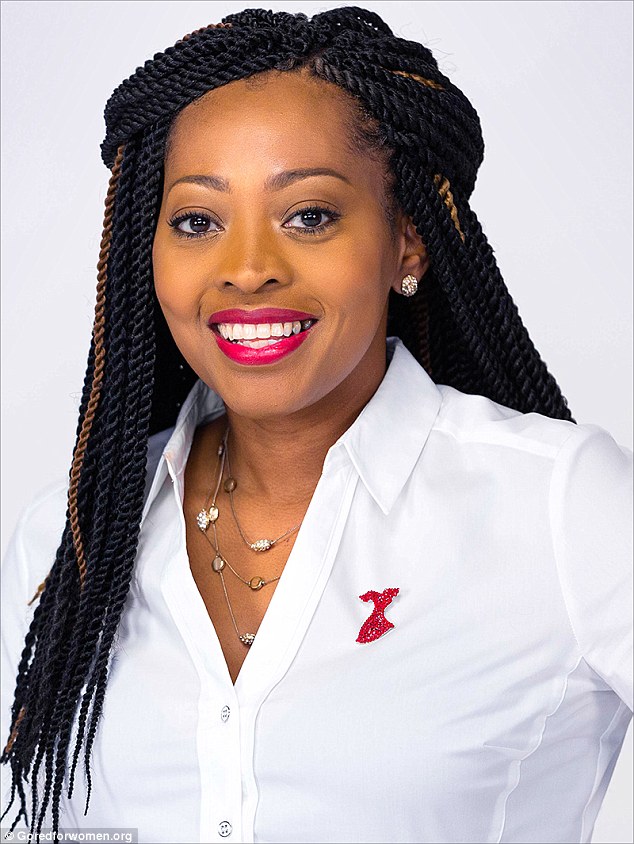 Tamika Quinn suffered two strokes when she was 27 years old, after developing blood pressure during her pregnancy

Tamika Quinn, of Chesapeake, Virginia, suffered two strokes when she was 27 years old, 10 days after her daughter was born.

She developed high blood pressure while she was pregnant with her third child, but was told it would go away after she gave birth.

When it didn’t, she was prescribed hypertension medication by her doctor.

However, Tamika, who has always struggled with her weight and has a history of high blood pressure in her family, didn’t think she needed the medication as such a young age. On February 22, 2002, Tamika woke up with an excruciating headache.

She went to the ER where she was diagnosed with a hemorrhagic stroke, a condition in which a ruptured blood vessel causes bleeding inside the brain.

This was followed by a second stroke three days later.

It took months for Tamika to recover her ability to walk and speak, and she continues to deal with long- and short-term memory loss and muscle control.

The strokes were a wake-up call for Tamika, so she took her medication as prescribed and lost weight.

However, after four years, she started overeating again and stopped taking her blood pressure medication.

‘My doctor told me I was headed down the path to have another stroke,’ she said. ‘I realized I needed to get my life together.’

Desperate to avoid medication, Tamika joined a hospital-based nutrition program to overhaul the family’s eating habits – she’s cut down on fatty meats and fried foods – and put a priority on exercise.

The work paid off. Tamika dropped several dress sizes and was allowed to reduce her medication. 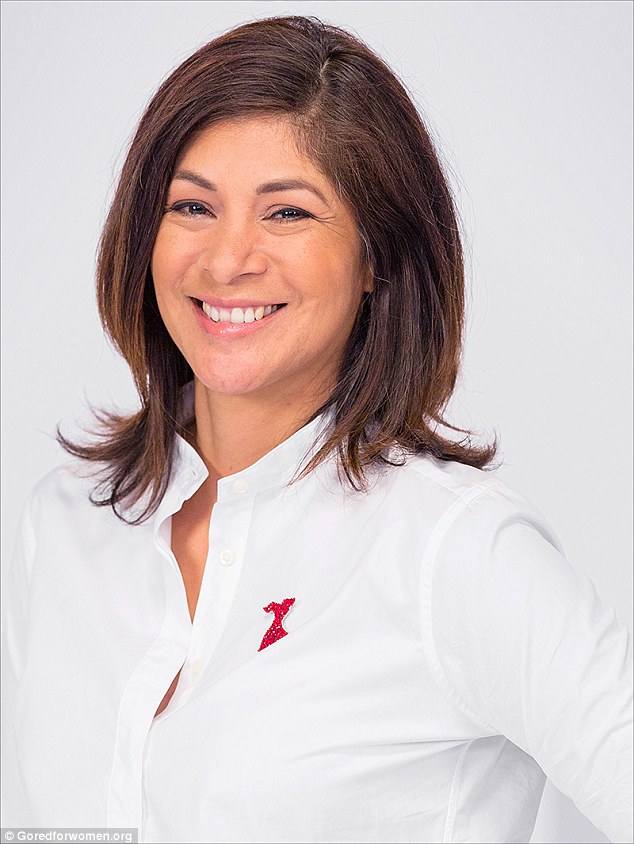 Lilly Rocha had a heat attack at 37 years old, despite having no known risk factors, such as high cholesterol and high blood pressure

The study found mental stress such as public speaking was more likely to cause myocardial ischemia, inadequate blood flow to the heart muscle, in young women who have had a heart attack compared to their male peers.

While previous studies showed a higher heart risk from mental stress for women, it wasn’t clear to what extent.

Researchers said women may be more prone to constriction of tiny peripheral and coronary blood vessels, which is a mechanism through which emotional stress can affect cardiovascular risk.

Previous studies showed a higher heart risk from mental stress for women, but it wasn’t clear to what extent.

Lilly Rocha was at the height of her career when she suffered a heart attack at 37 years old.

The 46-year-old, of Pasadena, California, had workaholic schedule, which included constant world travel and working more than 60 hours a week as a senior director of an event management firm, but she had no risk factors such as high cholesterol or high blood pressure.

One day she began feeling pain in her arm, jaw and chest while in her Long Beach, California office.

When a co-worker suggested she could be having a heart attack and should go to a hospital, she didn’t believe him. A heart attack survivor himself, he didn’t take no for an answer and drove her to the ER.

‘I told him, ‘don’t worry about me, because that’s what we do as women,’ she said. ‘I kept downplaying my symptoms.’

She spent a few days in the hospital and returned to work two weeks later. However, it took two years for her to recover from the recurrent angina and the emotional toll of her heart attack.

Doctors still aren’t sure what caused Lilly to have a heart attack, though they believe it’s likely a genetic link, because she doesn’t have any other risk factors, such as atherosclerosis, high cholesterol or high blood pressure.

Around this time she learned her grandfather had died of a heart attack at 37 years old.

Lilly, who grew up on a typical Colombian diet – a diet white rice, black beans and meat every day – now uses soy or chicken-based chorizo, egg whites and whole grain tortillas in her breakfast burritos.

She also eliminated sugary drinks and added more whole grains to her meals. 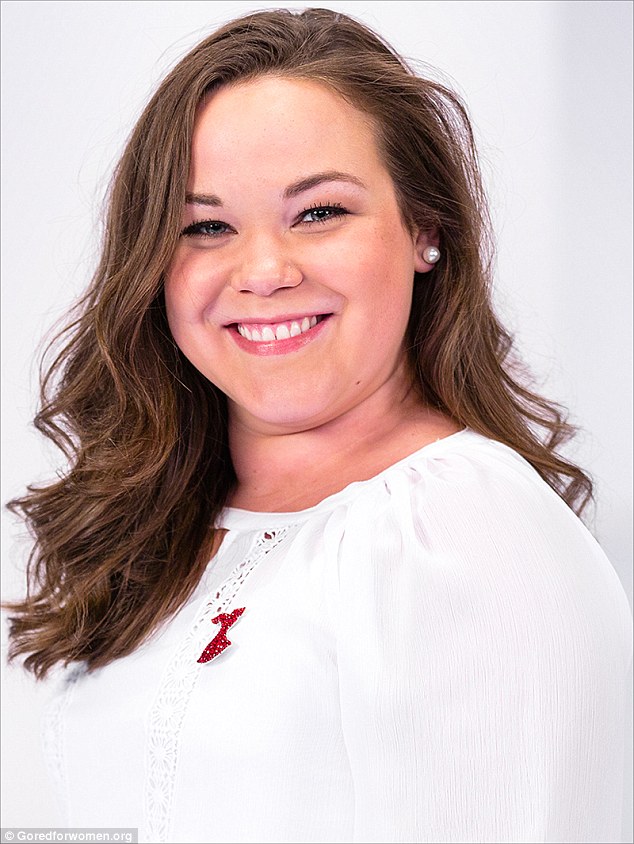 Heidi Stewart, 22, went into cardiac arrest during her senior year in high school

Heidi Stewart went into cardiac arrest during her senior year in high school in 2013.

The 22-year-old, who swam competitively since she was eight years old, began passing out after swim meets.

When her parents took her to a pediatric cardiologist, she underwent an echocardiogram that showed she was experiencing palpitations. Heidi was diagnosed with anxiety and encouraged to get plenty of sleep, stay hydrated and eat well.

‘A lot of people close to me at first thought I was trying to get attention or wanted to get out of races,’ she said.

Heidi remembers feeling ‘a little off’ the morning of February 12, 2013.

She said she felt sluggish getting ready for school, and asked to leave her anatomy class to rest after feeling lethargic.

In her third period leadership class, while hanging decorations around campus, she felt like she was going to pass out again. She steadied herself and went into the administration office where she collapsed.

However, after she went into cardiac arrest, doctors diagnosed her with arrhythmogenic right ventricular dysplasia/cardiomyopathy, an inherited progressive disease of the heart muscle that causes abnormal heart rhythms.

The condition is responsible for up to one-fifth of sudden cardiac deaths in people under age 35.

Doctors placed an implantable cardioverter defibrillator that acts as a pacemaker and shocks her heart if it goes into a dangerous rhythm. The device was triggered three times in October 2015, causing doctors to do an ablation to remove some of the tissue causing the arrhythmia.

A lifelong athlete, Heidi has had to significantly reduce her physical exertion to avoid triggering an abnormal rhythm.