An asymmetrical dinosaur head has lead palaeontologists to question their past identifications of species after they assumed dinosaurs had symmetrical facial features.

The largely intact Styracosaurus skull has wonky horns and was discovered by then graduate student Scott Persons in 2015 in Dinosaur Provincial Park, Calgary, Alberta, Canada.

Its nonuniform facial structure has led to implications for paleontologists studying the horns at UAlberta led by Robert Holmes, who fear some incomplete skulls may have been mistakenly classed as new species because they did not match previous specimens.

Nicknamed Hannah after its finder’s dog, the dinosaurs asymmetrical face suggests more morphological variability in the genus than scientists thought.

Mr Persons, now a professor and museum curator at the College of Charleston, South Carolina, U.S., said: ‘When parts of one side of the skull were missing, paleontologists have assumed that the missing side was symmetrical to the one that was preserved.’

‘Hannah shows dramatically that dinosaurs could be the same way.’ 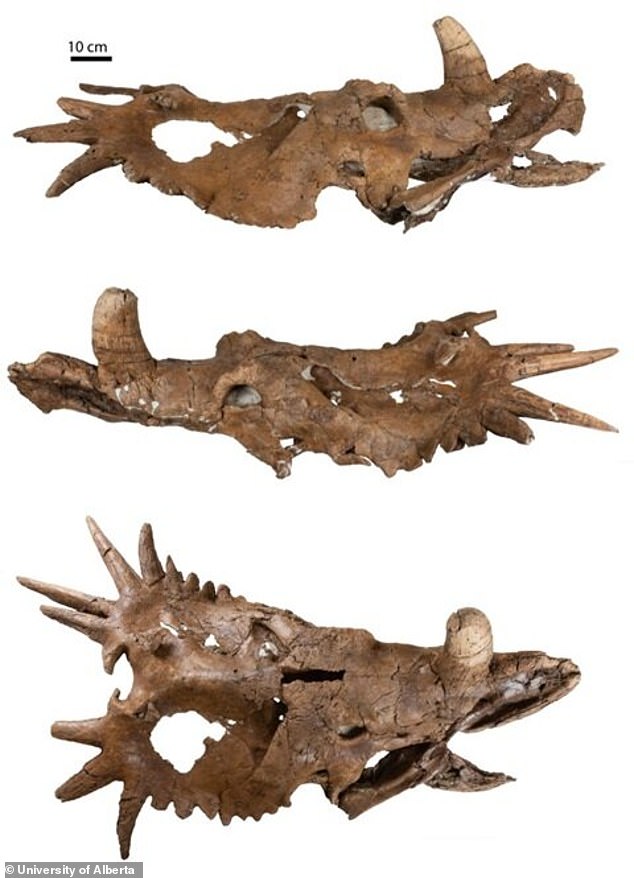 Hannah’s asymmetrical skull seen from all sides. It is not known if the Styracosaurus was a female but was around five meters in length

The differences were so distinct that scientists believe having found two separate halves they could have considered them separate species – various fossils will need to be reevaluated.

How many dinosaur species existed?

There are currently around 700 valid dinosaur species that have been discovered and named – with about 300 genera.

Scientists predict that there were many more as the fossil record is incomplete.

Fossils are not available for all periods of history due to some ages of rock worn from the earth’s surface such as the Middle Jurassic age.

Many dinosaurs from the Late Cretaceous period have been discovered.

Dr Holmes added: ‘The skull shows how much morphological variability there was in the genus.’

It is tradition for the finder to nickname the discovery, Mr Persons decided to name it after his dog Hannah: ‘She’s a good dog, and I knew she was home missing me while I was away on the expedition.’

It is not known whether the fossil is actually female.

Researchers gathered more information from the fossil by partnering with researchers Ahmed Qureshi and graduate student Baltej Rupal in the Faculty of Engineering who performed a 3-D laser scan of the scull.

Mr Persons said: ‘That let our publication to include a digital reconstruction, allowing scientists all over the world to download the 3-D model and inspect it in detail.’

Adding: ‘This is the future of paleontological collections: digital dinosaurs.’

‘Morphological variation and asymmetrical development in the skull of Styracosaurus albertensis’, was published in Cretaceous Research.