Worker run over as he clambers out of manhole in Russia

This is the shocking moment a worker is run over as he clambers out of a manhole but miraculously escapes with only a fractured rib.

A man’s head and chest poke above the ground when he is suddenly struck by a car as it turns a corner.

The unfortunate incident happened in Nizhnekamsk in Republic of Tatarstan in Russia.

Pictured: A manhole worker was hit by a car leaving helpless man struggling as passersby rushed over to help

CCTV footage shows a Nissan Juke driving around the corner as it hits the man with its front wheels.

The car stops before the female driver reverses away.

At the same time a pedestrian turns behind him to see the worker dangerously pinned to the manhole as he rushes over to help the struggling victim.

Dramatically the injured worker falls into the hole and has to be hauled back above ground by a heroic passerby.

He was later rushed to hospital where remarkably his only injury was a fractured rib.

Russian Police said the car was driven by a so-far unnamed woman but were not clear whether or not she would face charges.

It was noted there were no warning signs or fences around the manhole though it was on a grass verge.

The driver reportedly said her car had mounted the verge after taking a corner ‘badly’. 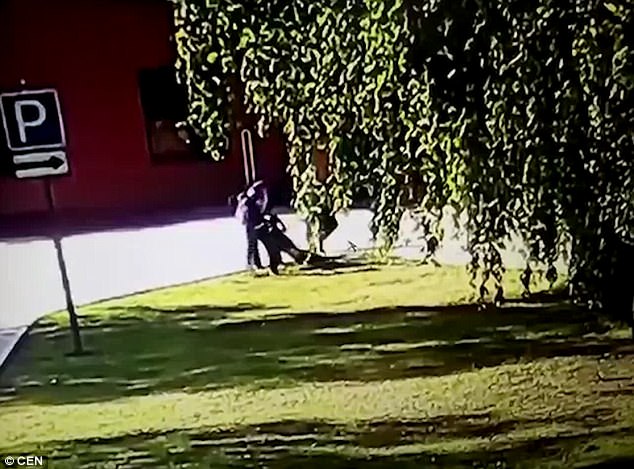