It’s often easy to chow down too much food at the workplace cafeteria at lunchtime after a hunger-inducing morning of solid work.

But a new study from researchers at the University of Cambridge suggests your company making small changes to their menu can help reduce your risk of becoming overweight.

They found that both changes in combination led to an 11.5 per cent reduction in the average number of calories purchased per day by employees.

Eating more calories than are needed is a form of unhealthy eating, the academics say, and plays a major role in the increasing rates of obesity.

WHAT IS A CALORIE?

The calorie is simply a unit of energy.

There are two main definitions of the  calorie in wide use. The ‘small calorie’ (cal) is the amount of heat needed to raise the temperature of one gram of water by one degree Celsius.

The kilocalorie (kcal), widely used in nutrition, is the amount of heat needed to cause the same increase in one kilogram of water.

The basic amount of calories an average adult needs a day is 2,000kcal for women or 2,500kcal for men.

This is based on the amount of energy the body needs to carry out basic functions and to walk and work throughout the day.

People who exercise lots need to eat more for fuel, and young people and children burn more energy, too.

Foods that are processed and have high levels of carbohydrate, sugar and salt have higher calorie numbers than fresh fruit and vegetables.

This in turn increases the risk of diseases such as type 2 diabetes, heart disease and many cancers, contributing to increasing rates of premature death worldwide.

‘This study shows that reducing portion sizes and the availability of higher calorie options in cafeterias could make an important contribution to reducing excess calories in strategies to tackle obesity.

‘If cafeterias in workplaces, schools, and universities implemented these changes, this could help reduce overconsumption of calories and help in widespread efforts to reduce population-level obesity.’

For the study, the Cambridge team worked with workplace cafeterias based in the distribution centres of a major UK supermarket chain, which they didn’t disclose.

These cafeterias were used by 20,327 employees, 96 per cent of which were in manual occupations.

The study took place over a longer time period – 25 weeks – and used more sites than previous studies, making it the ‘largest study of its kind’.

Over the 25-week period, working with the caterers, they replaced some higher calorie food and drink products with lower calorie ones – for example, swapping bacon and cheese burgers with grilled chicken burgers.

This led to a 4.8 per cent reduction in the average number of calories purchased per day.

Next, as well as reducing the availability of high calorie food and drink products, the team reduced the portion size of some higher calorie products by about 14 per cent in volume – for example, by serving a smaller slice of lasagne or portion of chips, or reducing the number of meatballs in a portion.

When both the availability and size of high calorie food and drink portions were changed, this led to an 11.5 per cent reduction in the average number of calories purchased per day compared to the baseline (where no changes were made at all). 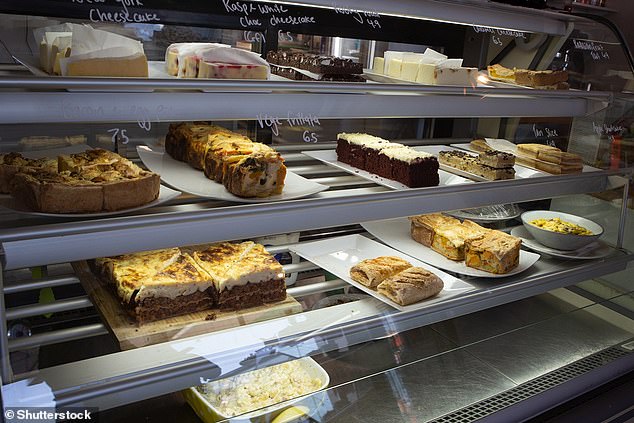 Obesity is defined by your body mass index (BMI) – a measure of body fat based on your weight in relation to your height.

For the typical worker, this would be equal to eating about 50 fewer kilocalories (kcal) per day. One kcal is the amount of heat needed to cause the same increase in one kilogram of water.

What’s more, the cafeterias experienced only a small drop in the amount of money taken at the till – a 2.6 per cent drop when just the availability of options was reduced,  and a 5.7 per cent drop when the portion sizes were also decreased.

The researchers suggest this may have been a temporary effect, as the drop decreased over time, and may in part be due to the fixed menu and product list that was required for the study.

‘Cafeterias should be able to compensate for a small drop in revenue by changing which products they sell or by additional strategies to make healthier food options more appealing,’ Dr Reynolds said.

The workplaces where the cafeterias were located were predominantly staffed by those working in manual occupations, who have – on average – worse health outcomes and higher body mass indexes (BMIs) compared to those in non-manual occupations.

The researchers acknowledge, however, that people living in less affluent areas or with lower socioeconomic status tend to have reduced access to healthy foods and higher rates of obesity.

‘Many of the measures introduced to reduce calorie consumption, such as mass media campaigns, have little overall impact, but can exacerbate health inequalities, helping mainly those who work in non-manual jobs,’ said senior study author Professor Dame Theresa Marteau, Director of the Behaviour and Health Research Unit.

‘We need to find interventions that works across the board. Our study suggests that making relatively simple changes to menus in workplace and other cafeterias could make an important contribution to tackling obesity in all groups.’

Interventions to lunch menus could be implemented at cafeterias not just in workplaces, but at schools and universities, to help tackle teen obesity.

The study has been published today in the journal PLOS Medicine.

An ideal daily intake of calories varies depending on age, metabolism and levels of physical activity, among other things.

Generally, the recommended daily calorie intake is 2,000 calories a day for women and 2,500 for men.

Calories are a measure of how much energy food or drink contains. The amount of energy you need will depend on:

Other factors can also affect how much energy you burn. For example:

The term calorie is commonly used as shorthand for kilocalorie.

You will find this written as kcal on food packets.

Kilojoules (kJ) are the equivalent of kilocalories within the International System of Units, and you’ll see both kJ and kcal on nutrition labels.

4.2 kJ is equivalent to approximately 1kcal.

To find out if you are a healthy weight, use the BMI calculator.

To lose weight in a healthy way, you need to use more energy than you consume by eating a healthy, balanced diet with fewer calories while increasing your physical activity.