‘How is he allowed to ref?’: Canada fans FUME at Janny Sikazwe after his failure to give them TWO ‘clear’ penalties in World Cup clash with Belgium… 10 months after he sparked huge controversy at AFCON by trying to end game on 85 minutes

Canada fans have been left furious by officiating in the opening 45 minutes of their first World Cup game for 36 years.

Supporters have blasted referee Janny Sikazwe following his failure to give them two ‘clear’ penalties after Alphonso Davies missed a spot-kick in the ninth minute of the game vs. Belgium in Group F.

The furor comes just 10 months on from Sikazwe blowing for full-time in Tunisia’s AFCON clash with Mali after just 85 minutes.

Canada were awarded a penalty early on for a handball by Yannick Carrasco which Belgian goalkeeper Thibaut Courtois saved but fans and pundits believe they should have had at least one more PK.

Belgium’s Eden Hazard passed the ball back towards defender Jan Vertonghen in his own area but it was loose and fell to Canada’s Tajon Buchanan. 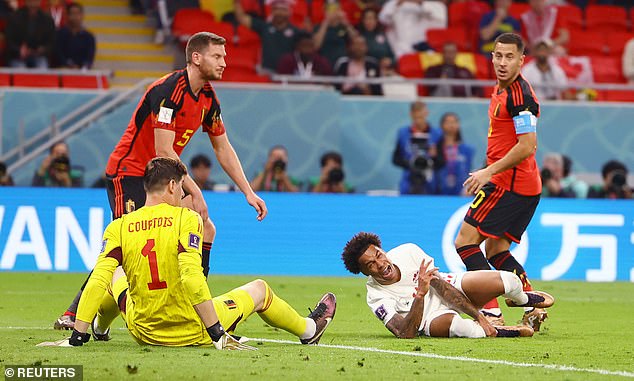 The winger was then brought down by the center back but the linesman put up his flag for offside. Referee Sikazwe then blew his whistle for offside.

As Hazard played the ball Buchanan should not have been judged to be offside.

Fox Sports pundit Stuart Holden said: ‘Missed call by the referee and the VAR not to go back. Canada should have a second penalty.’

While his fellow pundit Alexi Lalas added: ‘That was ridiculous. It’s amazing they are losing this game.’

One Twitter account read: ‘Canada robbed of another penalty by the referee. Linesman gave offside when Hazard passed the ball.’

One fan added: ‘Canada’s next penalty not given… why did I expect anything more? Another said: ‘This ref is so bad man, how’s he allowed to ref after the AFCON thing?’

‘Human error by the VAR and Canada should have had a second penalty,’ he said at halftime. 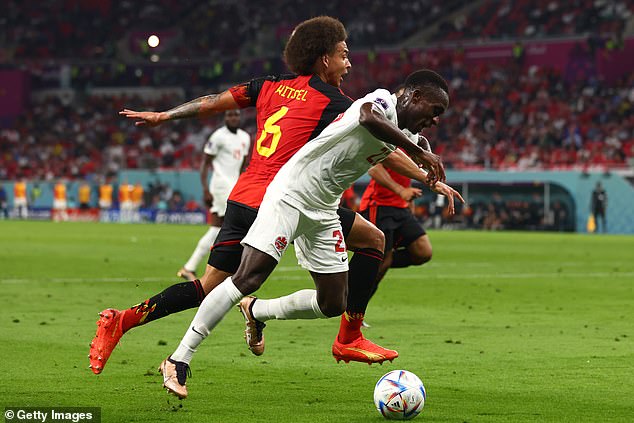 Later in the first half Richie Laryea fell in box under the pressure of Axel Witsel but Sikazwe or the VAR thought it was a foul.

Sportsmail columnist Oliver Holt wrote on Twitter: Canada desperately unlucky to be behind at the break here. Outplayed Belgium in that first half. Awarded one penalty and missed it. Should have had two other penalties but neither given. Belgium have been awful.’

Another fan added on the incident involving Buchanan: ‘This wasn’t a call against Canada for a penalty. What the f*** are we doing here.’

One more said on social media: ‘Canada got robbed of two clear penalties and now it’s 1-0 to Belgium.’

Canada fell behind to a Michy Batshuayi strike in the 44′ and that single goal proved to be the difference in the Group F clash Wednesday.

In January, fans labeled the Africa Cup of Nations tournament ‘a shambles’ and ’embarrassing’ after Tunisia and Mali’s clash descended into chaos.

Sikazwe blew the final whistle after just 85 minutes before restarting play, but then blew again with just 89 minutes and 43 seconds of the Group F clash gone.

The farcical scenes created quite a stir on social media with fans confused as to what happened, with some criticizing the AFCON tournament. 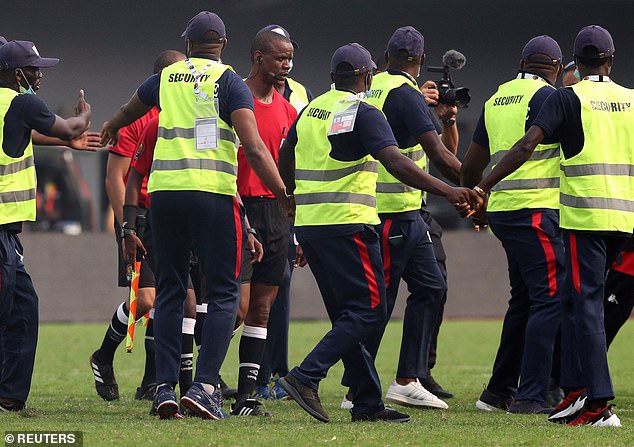 REVEALED: THE REFEREE AT THE CENTRE OF AFCON’S CHAOS BETWEEN MALI AND TUNISIA

The referee at the centre of the chaos in the Africa Cup of Nations match between Mali and Tunisia was suspended for corruption allegations in 2018.

Janny Sikazwe blew for the final whistle in the 85th minute of the match between the two sides before restarting play, rejecting a VAR review of a red card and then ending the match 20 seconds early once again.

He had to be escorted off the pitch after the bringing an end to the game. Mali won the match 1-0.

But four years ago, CAF suspended Sikazwe on suspicion of corruption after the way he handled an African Champions League match between Esperance and Primiero Agosto.

Esperance beat Rades 4-2, but Sikazwe awarded them a controversial penalty for their opening goal, before ruling out an Agosto goal for a perceived foul on the Esperance goalkeeper.

The ruling of the CAF disciplinary board at the time said: ‘The chairman of the Caf Disciplinary Board decides that there is good ground to hold a hearing regarding allegations of corruption made against Mr Janny Sikazwe.

‘Mr Janny Sikazwe is provisionally suspended from all football activities related to Caf pending a hearing before Caf Disciplinary Board.’