Timothy Weah described the USA’s progression to the knockout stages of the World Cup as ‘that of dreams’ and showed the nation ‘can play good football.’

The tricky winger, who was hugged by his Ballon d’Or-winning father and Liberian President George in the tunnel, scored what looked to be the second goal, securing the Americans a place in the Round of 16, only for the goal to be chalked off for offside.

Speaking postgame to FOX Sports’ Jenny Taft, Weah praised the team performance and in particular, the impact of Christian Pulisic, who left the game and was taken to hospital after suffering a pelvic contusion.

Timothy Weah scored what looked to be a winning goal, only for it to be ruled out for offside

‘We worked so hard as a group to be in these types of positions and Iran played a beautiful game,’ Weah said.

‘But, you know, thanks to Christian, he put it away and got hurt in the process, but we love him and thank him and we’re through. So, it is a great feeling.’ 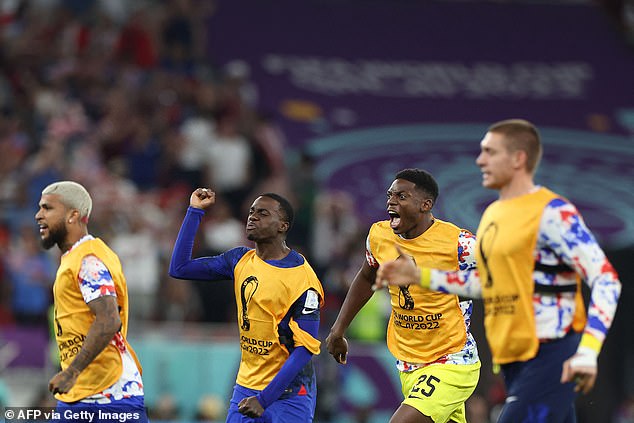 Weah (CL) along with DeAndre Yedlin (L), Sean Johnson celebrated the US’ progress to the R16

“I always say it’s us against the world. Cause no one believed that the U.S. could play good football. We’re just here trying to show the world.” 😤

Tim Weah joined @JennyTaft after the @USMNT clinched a spot in the knockout stage 🇺🇸 pic.twitter.com/vnRAFS9lWU

Pulisic has been lavished in praise by teammates and media alike since the US qualified for a chance at the quarterfinals. Weah was no exception.

‘He’s huge. Going back to him, not qualifying for the last world cup and being here and qualifying through, that’s a work of God.

‘God bless him. I love him. He’s so important to this team. A key player and leader,  someone that we definitely need. 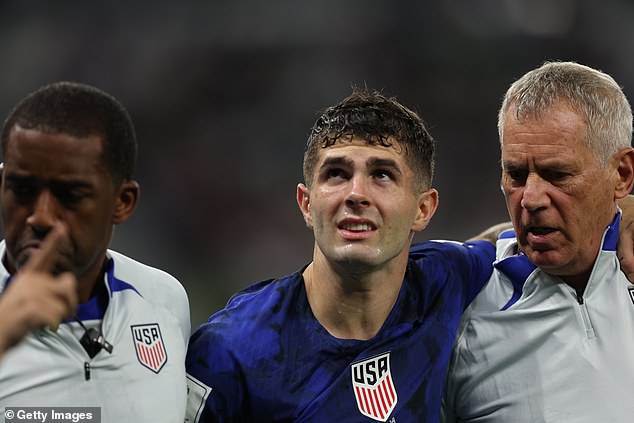 Christian Pulisic threw himself into the fire, ultimately succumbing to an abdominal injury

‘I always say it’s us against the world. Cause no one believed that the U.S. could play good football. We’re just here trying to show the world.

‘I think it’s no better than to do it with the people you love. My family are in the stands and we do it for them.’

The burgeoning US squad will next look to defy its doubters and the Dutch come Saturday morning. 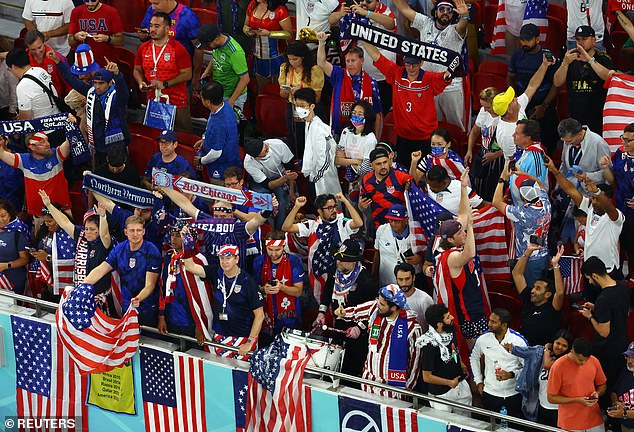