World Cup: What are the Welsh national anthem lyrics in English?

Wales’s disappointing performances in the World Cup has not stopped the squad from booming out its national anthem before games.

And besides the team, the use of their unofficial anthem has attracted plaudits from fans and commentators alike.

The last time Wales were in involved in a World Cup was in 1958, but they previously used  ‘God Save the Queen’.

For Qatar, however, they have used  ‘Hen Wlad Fy Nhadau’, otherwise known as the Old Land of My Fathers.

The last time Wales were in involved in a World Cup was in 1958, but they previously used ‘God Save the Queen’

Created by father and son Evan and James James in 1856, it has since become Wales’ unofficial but universally recognised national anthem.

Its popularity soared after the Bangor Eisteddfod festival of 1874 when it was sung by leading soloist Robert Rees, before then being increasingly used at patriotic gatherings.

In response, Wales’ ‘Teddy Morgan led the crowd in singing the anthem, which was unprecedented before a match.

What are the lyrics to Hen Wlad Fy Nhadau and what do they mean?

Old Land Of My Fathers

O Land of my fathers, O land of my love,

Dear mother of minstrels who kindle and move,

And hero on hero, who at honour’s proud call,

For freedom their lifeblood let fall.

Country! Country! O but my heart is with you!

As long as the sea your bulwark shall be,

To Cymru my heart shall be true.

O land of the mountains, the bard’s paradise,

Whose precipice, valleys are fair to my eyes,

Fire the fancy and quicken the blood.

For tho’ the fierce foeman has ravaged your realm,

The old speech of Wales he cannot o’erwhelm, 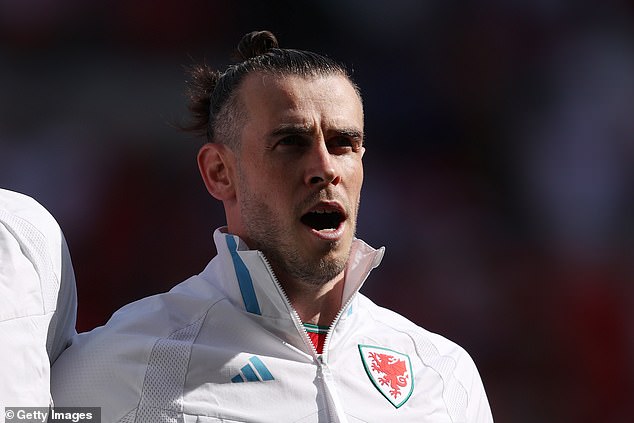 Created by father and son Evan and James James in 1856, it has since become Wales’ unofficial but universally recognised national anthem (Pictured: Gareth Bale belting out the national anthem)

Since then, it has frequently been sung at sporting events and governmental ceremonies, and while there have been a number of petitions launched to make it an official national anthem for Wales, it has never actually been established as such.

Eryl Davies, a 2nd Tenor rep in the London Welsh Male Voice Choir, told MailOnline: ‘The meaning in the words is what makes it so rousing.

‘You see people putting their hands on their hearts when they sing. You learn it at school and it’s part of your heritage growing up.

‘I have sung it and I’ve been in tears, it’s that emotional, especially with so many people around you. 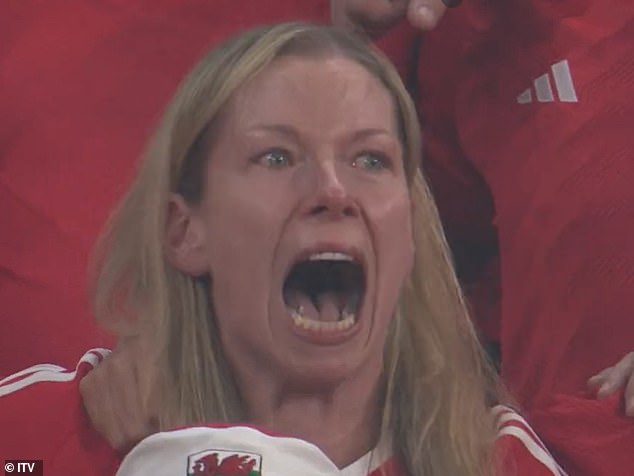 Dwynwen Morgan, a radio producer from Gwynedd, gave an impassioned display during the Welsh national anthem – when the Dragons took on USA on Tuesday – and caught the eyes of the spectators watching at home, who praised her pride when belting out her country’s song

‘I think it definitely pushes the team along, they know how much Wales support is behind them. That gives a lot of heart to those on the pitch.

BBC football host Gary Lineker said watching the crimson-shirted sea of fans – known as ‘the Red Wall’ – get behind the Welsh team had given him ‘goosebumps’.

Even Dwynwen Morgan, a radio producer from Gwynedd, was shown during ITV footage of the game in the Ahmad Bin Ali Stadium, belting out Hen Wlad Fy Nhadau, the official national anthem of Wales, with tears in her eyes.

She was later dubbed ‘the face of the anthem’ after giving a rousing rendition before they took on the USA in their opening match.

The news come as England and Wales are set to take on each other in the final game in the group stage.

England are top of the table with four points while Wales languish at the bottom with one.

Their last competitive meeting was at Euro 2016 when Daniel Sturridge scored a stoppage-time winner to secure a 2-1 England win.