World Health Organisation warns the Balkans is a ‘hotspot’ for coronavirus

The World Health Organisation today said the Balkans region is a ‘hotspot’ for coronavirus amid mounting speculation Croatia could be added to the UK’s quarantine travel list tomorrow.

The WHO said the Balkans have been a ‘concern of ours since early June’ because of an increase in case numbers as it urged the region to impose additional measures to ‘nip transmission in the bud’.

The comments are likely to fuel fears that ministers will add Croatia to the Government’s travel ‘red list’ before the weekend.

That would mean advising against all but essential travel to the popular tourist destination and forcing returning travellers to self-isolate for 14 days, potentially plunging the holiday plans of thousands of British tourists into chaos.

There is growing speculation Croatia could be added to the UK’s quarantine list after a surge in cases. Crowds of people are pictured in Crikvenica on the northern Adriatic coast on August 13 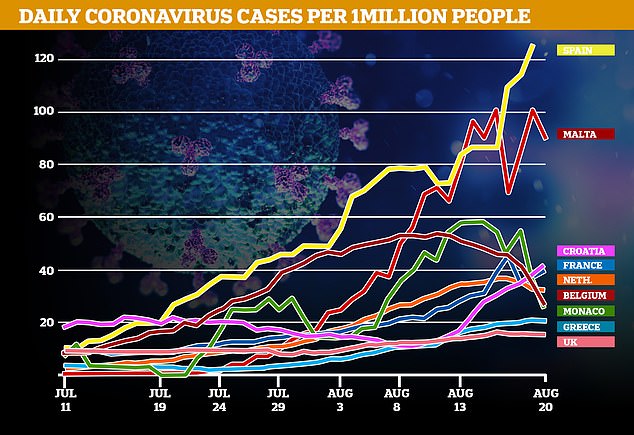 Dr Catherine Smallwood told a WHO press conference this morning: ‘The situation in the Balkans has been a concern of ours since early June when we started to see cases increase and it’s been very much a sub-regional hotspot over the summer period.’

She added: ‘We really need communities to take this on board, take the adequate steps both at a country level, in terms of the basic contact tracing, case identification and isolation and testing the systems that need to be in place.

‘And then where there are hotspots and increased transmission, additional, targeted measures need to be brought in place, very quickly, to nip transmission in the bud, stop it from spreading and keep the level of transmission at controllable levels.’

Croatia has seen an upsurge in coronavirus cases over the past week and yesterday the Adriatic nation posted numbers which almost matched its highest point in August.

The numbers are being closely monitored by the Department for Transport and the Foreign Office.

There is widespread speculation in Westminster that the rising case numbers will leave ministers with no choice but to treat Croatia the same as Spain, Portugal and France which have already been hit with travel bans.

Croatia currently has a cumulative rate of 27.4 cases per 100,000 people over the past seven day.

The UK Government has set a threshold for imposing quarantine restrictions at 20 cases per 100,000.

Any move to impose quarantine rules on Croatia is likely to wreak havoc with the travel plans of thousands of Britons.

Fears have been raised that Greece could also soon be added to the banned list as its case numbers increase but it is still below the threshold at 14.3 cases per 100,000.

The Government remains under intense pressure to ease its 14 day quarantine rules.

Airlines and the travel industry believe the restrictions could be slashed by introducing coronavirus testing on arrival at airports. 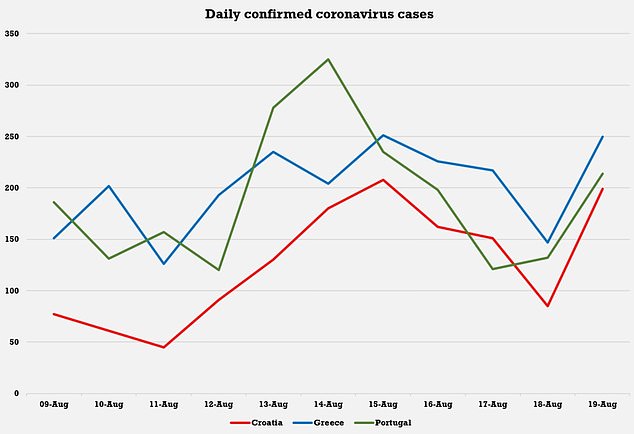 Croatia’s coronavirus daily case numbers are now above the UK Government’s threshold for imposing quarantine restrictions at 20 cases per 100,000 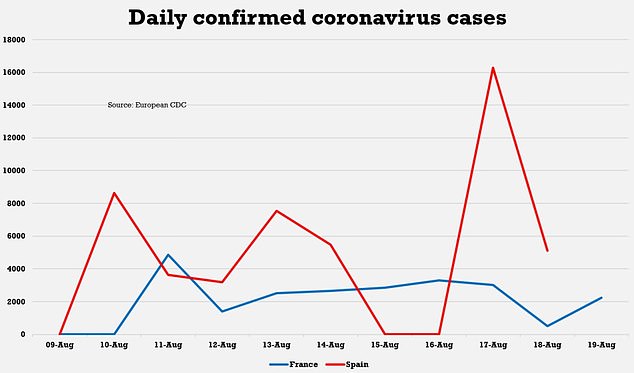 This would see travellers asked to self-isolate until they get their test results, with a negative test and a follow up a number of days later, allowing them to return to normal life.

Health Secretary Matt Hancock said yesterday that ministers are working with Heathrow Airport to find a way for coronavirus testing to reduce the quarantine period.

He told Sky News: ‘We’re working with Heathrow and with other airports on this project.

‘The challenge is because the virus can incubate inside your body without coming forward and without therefore a test being positive even if you’ve got it.

‘The challenge is how to do that testing in a way that we can have confidence enough in to release the quarantine.’